Deebo Samuel was carted off the field in Sunday’s dominant 35-7 win over the Tampa Bay Buccaneers with knee and ankle injuries, but it seems like the San Francisco 49ers avoided the worst.

The dynamic receiver who emotional on the cart, but head coach Kyle Shanahan feels Samuel can make a return for the playoffs, and maybe even beforehand. 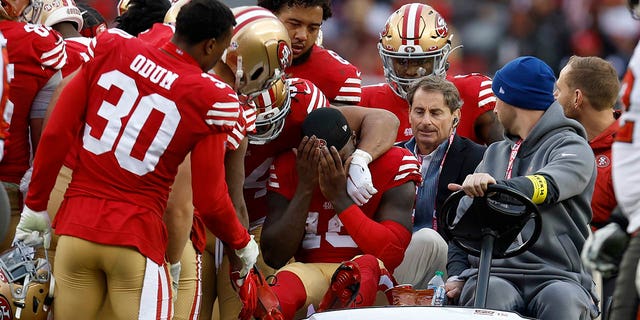 San Francisco 49ers wide receiver Deebo Samuel, middle, reacts as he is carted off the field during the first half of an NFL football game against the Tampa Bay Buccaneers in Santa Clara, Calif., Sunday, Dec. 11, 2022.
(AP Photo/Jed Jacobsohn)

Shanahan told reporters he expects his elite playmaker to return to the gridiron in around three weeks, according to ESPN.

An exact three-week timeframe would have Samuel return to the field in Week 17 for the Niners’ Jan. 1 game against the Raiders in Las Vegas. San Fran closes the season the following Sunday when they host the Arizona Cardinals. 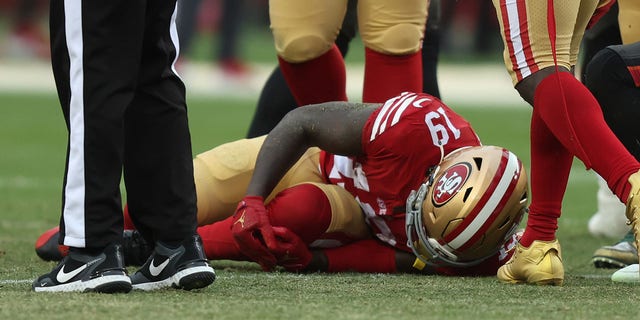 Deebo Samuel #19 of the San Francisco 49ers is injured during the second quarter against the Tampa Bay Buccaneers at Levi’s Stadium on December 11, 2022 in Santa Clara, California.
(Lachlan Cunningham/Getty Images)

49ERS’ DEEBO SAMUEL CARTED OFF THE FIELD WITH ANKLE INJURY

The 9-4 Niners lead the NFC West over the 7-6 Seattle Seahawks — their opponent this Thursday in Seattle. A win would clinch the division, as San Fran would be up three games with three to go, but they will have already taken the tiebreaker over Seattle by going 2-0 against them this season. It’s of course not out of the question that the Niners would sit Samuel for the remainder of the regular season if the division is clinched sooner rather than later.

San Francisco is still alive for the first-round bye, but it is a large outside chance, as they would need to win out and get a lot of help — the 12-1 Philadelphia Eagles would need to lose out, while the 10-3 Minnesota Vikings would need to lose at least one game — if both teams finish 13-4, tiebreakers would come into play. 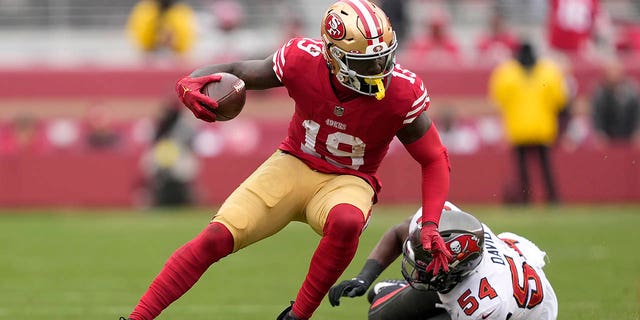 Before leaving the game, he had four catches for 43 yards to go with 21 yards on the ground and a rushing touchdown. In 12 games this season, he has 54 catches for 612 yards and two touchdowns — but on the ground, he has 41 carries for 228 yards (5.6 YPC) and three touchdowns. He had 1,770 scrimmage yards and 14 touchdowns in his First-Team All-Pro 2021 campaign.