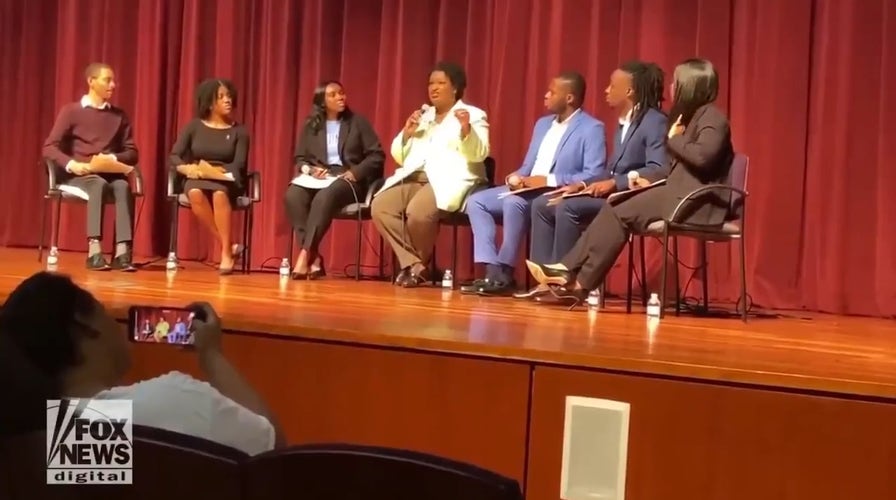 The Georgia democratic gubernatorial candidate said there was ‘no such’ thing as a fetal heartbeat at six weeks of gestation.

Georgia Democratic gubernatorial candidate Stacey Abrams trampled heavily on science when she claimed, “there is no such thing as a heartbeat at six weeks. It is a manufactured sound designed to convince people that men have the right to take control of a woman’s body.”

The heartbeats that she says don’t exist are my life’s work as a diagnostic radiologist. Day in and day out, pregnant women lay down on our examining table, breathless with anticipation. “Is the baby alive?” they want to know. They know they are pregnant, but it is only when the transducer goes down on the perfectly flat belly and the pulsing whoosh-whoosh of doppler sound that is the fetal heartbeat fills the room that we can assure her the baby lives.

It is probably one of the prettiest sounds in medicine, and it never fails to bring a smile to everyone who hears it, from mom and dad to physician and technician, and to anyone that is walking by the room. It is a sign of life, and life very distinct from the mother’s. The mother’s heart beats at around 75 or 80 beats per minute, perhaps slightly faster when she’s nervously lying on the table. But the embryo? The embryo’s heartbeat is quick as lightning, and can often be up to 160 beats per minute — or more. A sluggish heart rate is a bad sign. A brisk and regular rate is cause for celebration.

When Abrams calls the doppler fetal heart signal a “manufactured sound,” she shows a gross lack of understanding about the basics of ultrasonography. Putting it simply, ultrasound scanning of unborn children is the culmination of decades of development of very early work using sound waves (sonar) to detect the presence of underwater objects like submarines. Ultrasound scanners can be regarded as a form of “medical” sonar. Doppler ultrasound, the kind we use to detect the heartbeats of unborn children, works by measuring sound waves that bounce off of moving objects, such as the blood cells traveling through the fetal heart. The computer receives the data which it translates into pictures and sounds, so that we can see and hear what is hidden deep inside the mother’s womb.

An operating room technician performs an ultrasound on a patient at Hope Medical Group for Women in Shreveport, La., on July 6, 2022.  ((AP Photo/Ted Jackson, File))

Calling this sound “manufactured” is like calling the X-ray of a hand or foot a “manufactured” image. It is quite true that we don’t have X-ray vision and our naked eyes can’t penetrate human flesh and see the bones inside — for that we have X-rays. In quite the same way, ultrasonography penetrates the mystery of the human body and delivers accurate sounds and images that allow us to understand the marvels that are taking place inside, or in some sad cases the diseases.

In order for us to peer into the human body, generations of scientists and researchers have developed a tremendously effective and impressive array of diagnostic tools. Most have been men, perhaps, although not all. Who can forget Marie Curie, who gave her life to the development of the X-ray, dying of the radiation that no one understood at that time? These dedicated men and women were obviously not aiming to “convince people that men have the right to take control of a woman’s body.” They were in the business of imaging the calcium in bones, or measuring the concentration of radiotracer in a tumor, or the rush of blood in the heart of a tiny embryo, because that would improve men’s and women’s lives.

For the “fact-checkers” desperately wanting to give Abrams some cover who claim that it’s more proper to call a fetal heartbeat cardiac or “electrical activity,” this is a silly argument which falls flat with any woman who has ever lain on an exam table, waiting for the magic sound to start pulsing through the room, or any man that has been holding that woman’s hand. When the distinctive, delightful, surging and rushing beat fills the air, what we are all hearing is the sound of life. And life is beautiful.

Dr. Grazie Pozo Christie is a Policy Advisor for The Catholic Association.  She writes and speaks in both Spanish and English about Catholicism, religious freedom, and the intersection of faith and science. Dr. Grazie Pozo Christie grew up in Guadalajara, Mexico, coming to the United States at the age of eleven.  She is a graduate of Columbia University and the University of Miami School of Medicine.