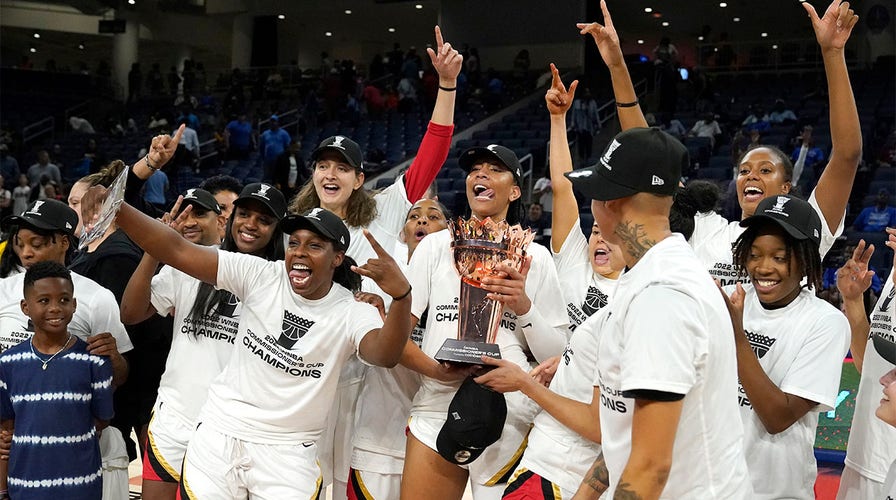 Kelsey Plum scored 12 of her 24 points in the first quarter as the Las Vegas Aces raced to an early 23-point lead, then held on for a 93-83 victory over the Chicago Sky on Tuesday night to win the second WNBA Commissioner’s Cup championship.

Plum, who won the All-Star MVP in Chicago a few weeks ago, hit six of her nine 3-point attempts.

“We were moving the ball really well and I just happened to be the beneficiary of a lot of wide-open looks,” Plum said. “You know I came into the game telling myself to be really patient and just let it come, but it came really early.”

Chelsea Gray had 19 points — including nine pivotal points in the third quarter — and earned MVP of the game. 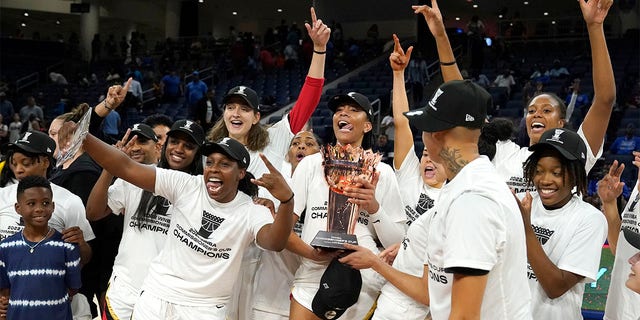 “My team balled out today. We hooped,” Gray said. “I know I’m the MVP right now, this should go to them right there. Super proud of this team and everything we accomplished.”

A’ja Wilson had 17 points, 17 rebounds and six blocks as the Aces dominated early, then repelled several Sky runs in the second half. Jackie Young had 18 points.

Candace Parker led Chicago with 20 points and Kahleah Copper and Emma Meesseman each added 18. Defending WNBA champion Chicago closed within seven points at the end of the third quarter, but lost a second straight game for the first time this season.

The Aces outscored the Sky 33-14 in the first quarter. That was the difference in this one.

“You know, early on, I feel we were very passive and credit to them,” Parker said. “They came out and threw the first punch. That’s not the way we wanted to come out and play.”

Added Sky coach James Wade: “I think Vegas is too good of a team to get behind like that.”

Chicago and Las Vegas finished as the top teams in the Eastern and Western Conferences with 9-1 records in the Commissioner’s Cup in-season tournament. The Sky (21-7) and Aces (20-8) also are 1-2 in the WNBA regular season standings and have secured playoff spots. 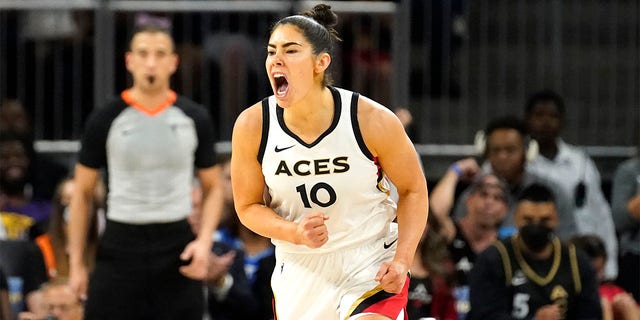 Las Vegas Aces’ Kelsey Plum yells out after scoring during the second half of the WNBA Commissioner’s Cup basketball game against the Chicago Sky Tuesday, July 26, 2022, in Chicago. The Aces won 93-83.  (AP Photo/Charles Rex Arbogast)

Seattle won the inaugural Commissioner’s Cup last year. The championship game doesn’t count toward regular-season standings, but coaches and players of both teams said it’s a springboard for their stretch runs and a “measuring stick” against another top team with plenty on the line.

A new wrinkle this season, the WNBA is making $165,000 in donations to charitable and civic organizations during this series. Teams selected one organization in their area, with each group getting $2,000 for a win and $500 for a loss in tournament play.

The Commissioner Cup winner’s organization will get a total of $28,500 and the championships game loser’s group will get $23,500.

The Aces selected ACLU of Nevada and are one of three WNBA teams to partner with a local ACLU chapter. The Sky chose My Block, My Hood, My City, a grassroots Chicago non-profit that mentors underprivileged youth through educational programs primarily on the city’s South and West Sides. 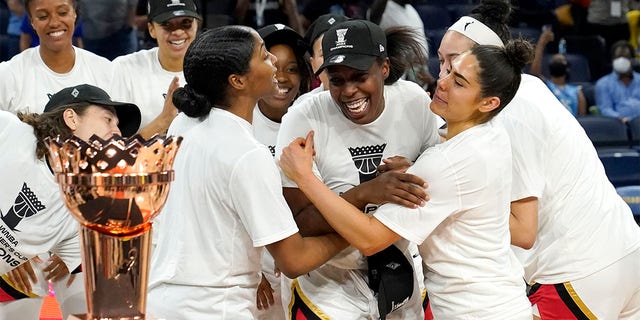 Las Vegas Aces’ Chelsea Gray, center, is mobbed by her teammates as she is named MVP of the WNBA Commissioner’s Cup basketball game against the Chicago Sky Tuesday, July 26, 2022, in Chicago. The Aces won 93-83.  (AP Photo/Charles Rex Arbogast)

The Aces blitzed the Sky early, racing ahead 13-0 just 1:55 in and building a 33-14 lead after one quarter and stretching the advantage to 23 points early in the second.

The Sky mounted a run late in the second quarter to close within 12 points – and a crowd of 8,922 at Wintrust Arena rose to its feet. Still, Las Vegas lead 48-34 at the half on 53% shooting.

The Sky tightened its coverage in the third quarter a closed the gap to seven points before Plum hit a 3 in the final seconds to make it 70-60.

The Sky and Aces entered 1-1 against each other. Chicago’s win, 104-95, came on June 21 at Las Vegas when it rallied from 28 points down for the biggest comeback in WNBA history.

“(I told them) to just stay solid defensively, handle the pressure and continue to play defense,” Hammon said. “You know that game we had in Vegas. They’re the champs and aren’t going to go away easily.” 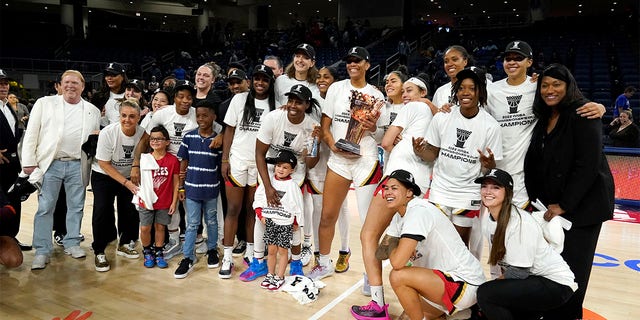 Hammon was joined by one of her young sons, Cayden, on the dais at the post-game press conference. When asked by a reporter if it was past his bedtime, Cayden replied, “No, I go to bed later than this.”