Attorney General Merrick Garland swore in the new director of the federal Bureau of Prisons Tuesday as the Biden administration looks to reform the beleaguered agency.

Colette Peters was sworn in at the agency’s headquarters in Washington. The former director of the Oregon state prison system replaces Michael Carvajal, who submitted his resignation in January amid mounting pressure from Congress after investigations by The Associated Press exposed widespread corruption, misconduct and abuse in the agency.

She takes the reins about a week after Carvajal appeared before a Senate subcommittee investigating the agency during which he refused to accept responsibility for a culture of corruption and misconduct that has plagued his agency for years, angering both Democratic and Republican senators.

BUREAU OF PRISONS DIRECTOR SLATED TO RESIGN AMID CONTROVERSY

Peters said during her swearing in that she was “humbled, honored and proud to serve” in the position. She also welcomed congressional oversight, adding that she believes in “good government” and transparency. 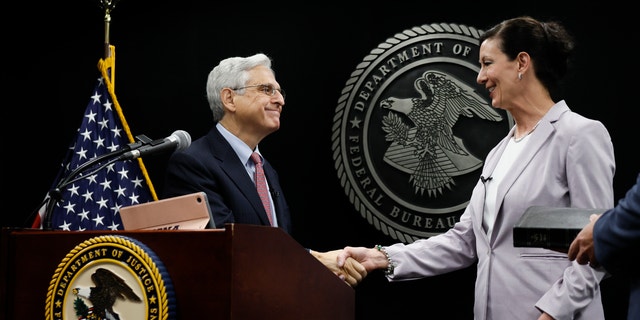 Attorney General Merrick Garland shakes hands with Colette Peters, director of the federal Bureau of Prisons, after she was sworn in at BOP headquarters in Washington, D.C. (Evelyn Hockstein/Pool Photo via AP)

Peters is only the second director in the agency’s history with no prior experience in the federal prisons system. Deputy Attorney General Lisa Monaco led the search for the new director and had been looking for someone who was focused on reforming an agency that has had cultural issues for decades.

Attorney General Merrick Garland said he had “full confidence” in Peters’ ability to innovate, reform and lead the Bureau of Prisons.

In an interview with the AP last month, Peters stressed the importance of working to “create an environment where people can feel comfortable coming forward and talking about misconduct.”

HOLDEN & PYE: TRUMP MADE CONSERVATIVES CRIMINAL JUSTICE REFORM LEADERS. HERE’S HOW TO KEEP IT THAT WAY

Investigations by the AP have exposed myriad crises in the agency that agency that employs more than 30,000 people and has an annual budget of about $8 billion. The AP documented sexual abuse by correctional officers, rampant criminal conduct by staff, dozens of escapes, deaths and critically low staffing levels that have hampered responses to emergencies.