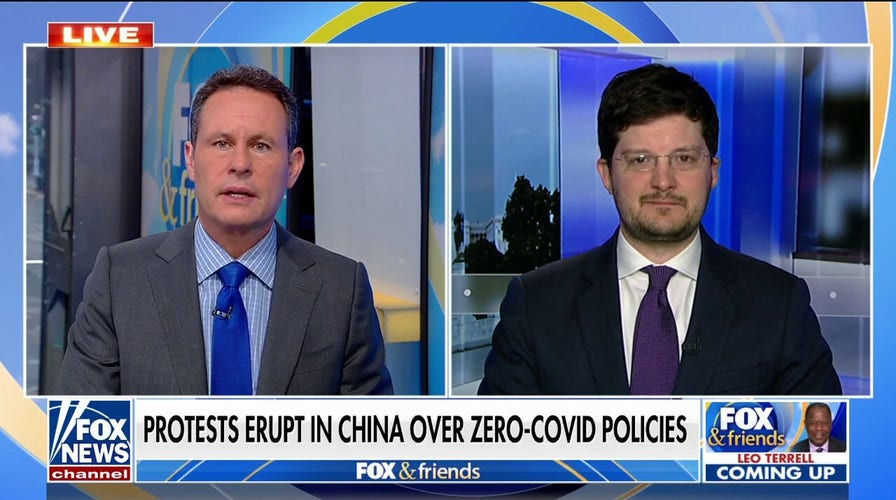 China protests are the reaction to years of repression: Dr. Jonathan Ward

Atlas Organization founder Dr. Jonathan Ward argues its ‘still early’ to know if the demonstrations in China will be a challenge to the regime or just frustration with the COVID policies.

Anti-lockdown protests have spread to multiple American universities, part of a growing global movement in support of protesters in China demonstrating against their country’s “zero-COVID” policy.

Students from Columbia, Duke, North Carolina and the University of California Berkeley gathered for demonstrations in support of Chinese protesters in recent days, according to a report from France 24, expressing solidarity with a population that has seen its frustrations boil over amid over two years of strict COVID-19 prevention measures.

Chants of “Free China!” and “Xi Jinping, step down!” were heard at California Berkeley protests, with one protester holding a sign with a drawing of Chinese President Xi Jinping that read “Death to the dictator.”

The scenes at American college campus come as Chinese authorities have launched a massive law enforcement response to protests that started last week and continued to intensify throughout the weekend across China, largely at least temporarily restoring order in the major cities of Beijing and Shanghai on Tuesday. 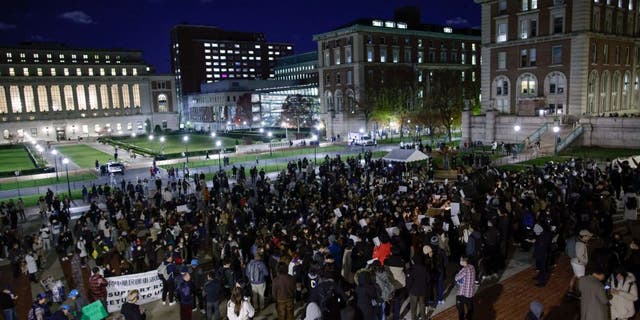 People gather at Columbia University during a protest in support of demonstrations held in China calling for an end to COVID-19 lockdowns.
(R/AFP via Getty Images)

The protests originated after an apartment complex fire in the far-west region of the country resulted in the deaths of 10 people, an event that has been blamed on a delayed response by the local fire department amid continued lockdown policies.

Protesters took to the streets across the country to demand pandemic restrictions be eased, while others even called for the resignation of the country’s top leaders.

The protests cap a tumultuous couple of months for the Chinese Communist regime, which has generated increased scrutiny over its mass internment of ethnic Uyghurs in Xinjiang and continued threats toward neighboring Taiwan.

A protest organizer from China at Columbia, who only identified himself as Shawn, said he preferred to keep the school’s demonstration focused on COVID policy and not other controversies. 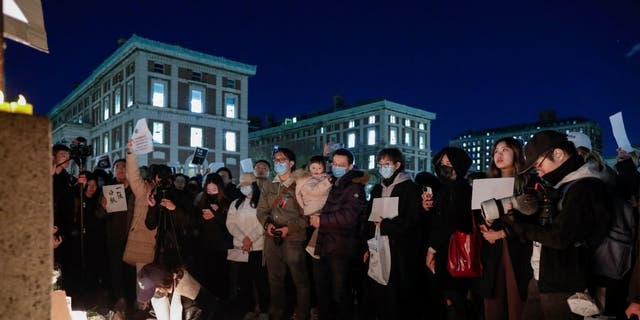 People gather at Columbia University during a protest in support of demonstrations held in China calling for an end to COVID-19 lockdowns.
(Photo by KENA BETANCUR/AFP via Getty Images)

CHINESE AUTHORITIES LOOSEN COVID-19 RESTRICTIONS IN SOME NEIGHBORHOODS AFTER PROTESTS

“We know that may alienate a lot of people,” the protester told Reuters.

However, the spread of campus protests is part of a larger movement across the globe, with some demonstrators in Washington,D.C., marching on the State Department and taking direct aim at the Chinese government’s treatment of the country’s Uyghur population.

“We want them to issue a formal statement condemning the loss of lives, Uyghur lives, and to call for full transparency on the real number of deaths that occurred,” Salih Hudayar, one of 25 members of the city’s Uyghur community who took part in the demonstration, said, according to France 24.

“We’re hoping that the international community supports these protesters in demanding accountability from the Chinese government,” she added. 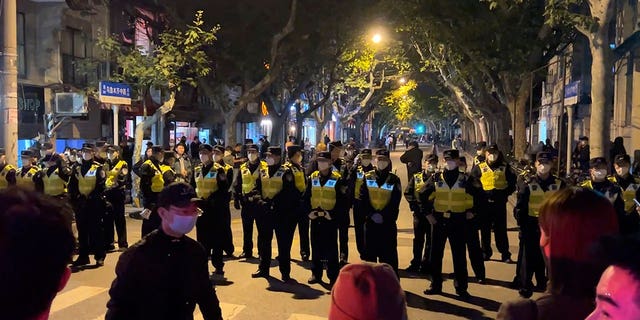 Chinese police officers block off access to a site where protesters had gathered in Shanghai on Sunday, Nov. 27, 2022.
(AP Photo)

“(Officials) are borrowing the pretext of COVID, but using excessively strict lockdowns to control China’s population. They disregarded human lives,” said a Chinese student identified only as Chen. “I came here to grieve.”

Overseas, a demonstation in Paris drew over 200 people Sunday, with local Chinese residents there saying they were supporting their country’s protests from afar.

“It’s what I should do. When I saw so many Chinese citizens and students take to the streets, my feeling is they have shouldered so much more than we have,” Chiang Seeta, a Chinese graduate student who helped organize the protest, told Reuters. “We’re now showing support for them from abroad.” 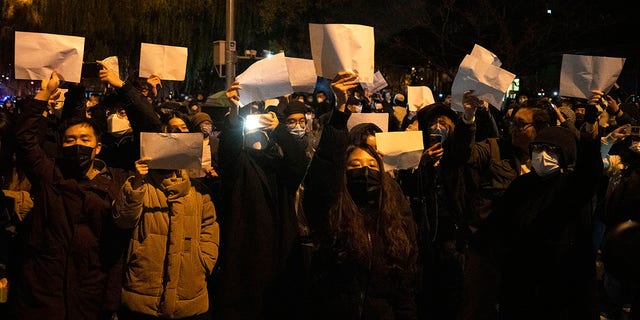 A similar scene played out at one of Tokyo’s busiest train stations Sunday, with about 90 people gathering to protest the Chinese Communist Party.

“At the core of it is China’s system,” one student, identified only as Emmanuel, told Reuters.