Arizona Cardinals cornerback Jeff Gladney dies in 2.30am Dallas car crash aged 25 – just as he got his career back on track following felony assault acquittal

NFL player Jeff Gladney, who was once on the Minnesota Vikings and the Arizona Cardinals, died from a car accident in Texas at age 25.

The cornerback was found dead on Woodall Rodgers Freeway in Dallas earlier on Monday morning. Dallas Police said the crash occurred at 2.30 a.m. and reported two fatalities, including Gladney.

‘We are asking prayers for the family and privacy at this most difficult time,’ his agent Brian Overstreet said.

The former Texas Christian University (TCU) draft prospect had just signed with the Cardinals in the 2022 off-season after being acquitted from felony assault. In 2021, a woman that Gladney had been in a relationship with claimed that the NFL player domestically assaulted her after he demanded to see her text messages in his car.

Investigators said a vehicle was going over the speed limit and and clipped another car from its rear, according to CBS News. The driver of the speeding car lost control and crashed into the highway’s beam, near Allen St. Two people were in the other vehicle but they reportedly came out of the incident unscathed.

Further details about Gladney’s death and the car accident that he was involved in have yet to emerge, including whether the 25-year-old was the driver and if he was intoxicated. DailyMail.com has contacted the Dallas County Sherriff’s Office for further details over the fatal incident. 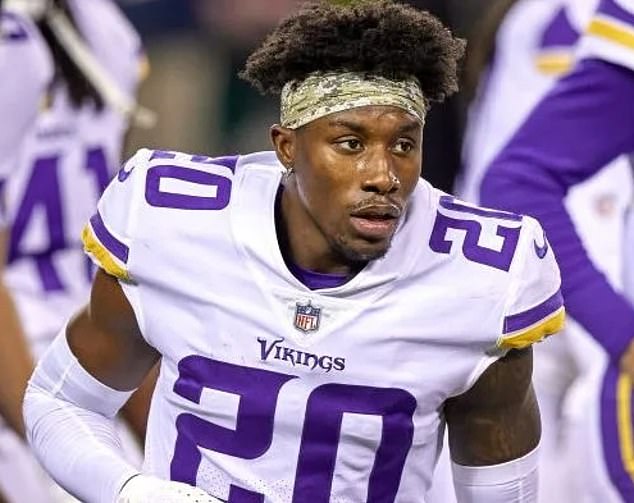 Former Minnesota Vikings cornerback Jeff Gladney, who had just signed recently signed with the Arizona Cardinals in the 2022 off-season, has reportedly died at the age of 25 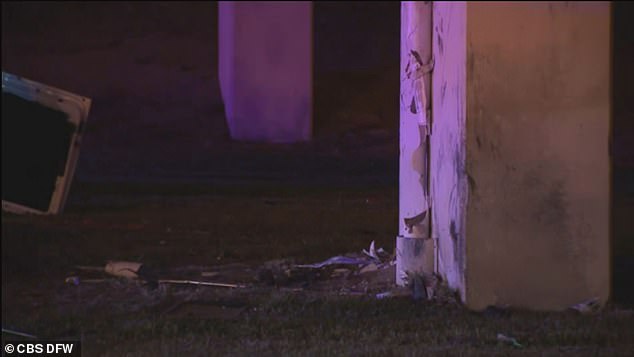 The site of the car crash in Dallas, Texas, where Gladney was found dead at 2.30 a.m. on Memorial Day 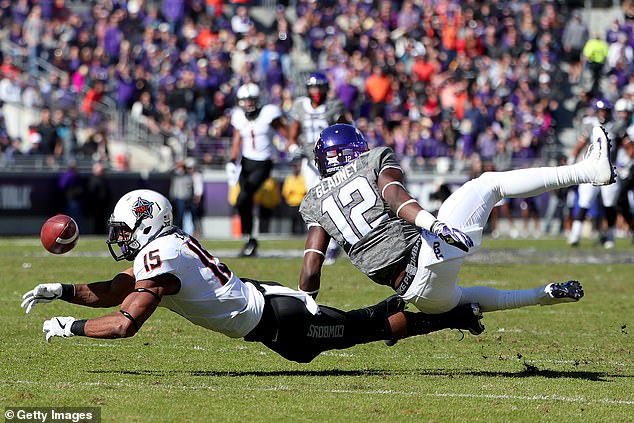 The 25-year-old cornerback (pictured as No 12 here) was a four-year started at Texas Christian University (TCU) and was named all in the All-Big 12 Honors during his time in college. He was also known for his tough style of play by NFL recruiters

Gladney started 15 games in his 2020 rookie year with the Vikings. He had not been around the NFL since his arrest in April 2021 in Dallas. After being found not guilty in a Dallas court on March 10, he signed a two-year deal with the Cardinals.

On Monday afternoon, the Cardinals released a statement after learning the news, describing the player’s death as a ‘tremendous loss.’

‘We are devastated to learn of Jeff Gladney’s passing,’ the statement read. ‘Our hearts go out to his family, friends and all who are mourning this tremendous loss.’

Gladney’s old team, the Minnesota Vikings, also mourned the loss of its former player in a publicly shared statement.

‘We are saddened by the tragic death of former Viking Jeff Gladney. Our hearts go out to his family and friends, as well as the Arizona Cardinals organization and Jeff’s current and former teammates and coaches who are mourning his life lost much too soon,’ the statement read. 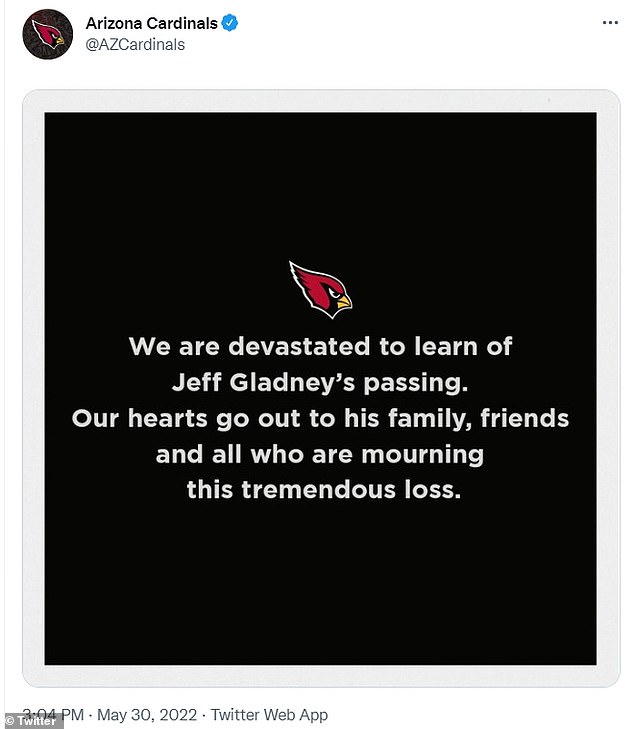 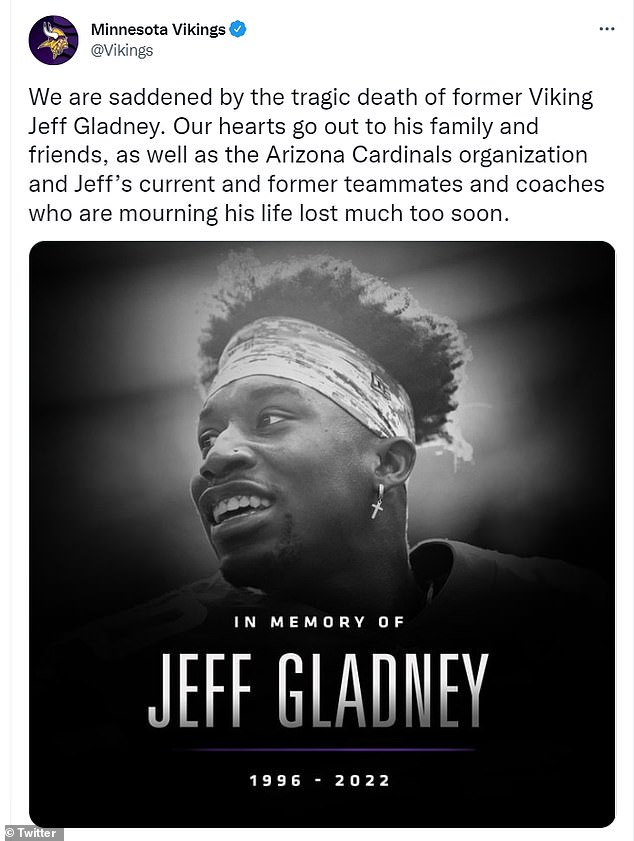 All of Gladney’s teams, including the Minnesota Vikings and the Arizona Cardinals, tweeted statements regarding Gladney’s death on Monday afternoon, playing tribute to the cornerback 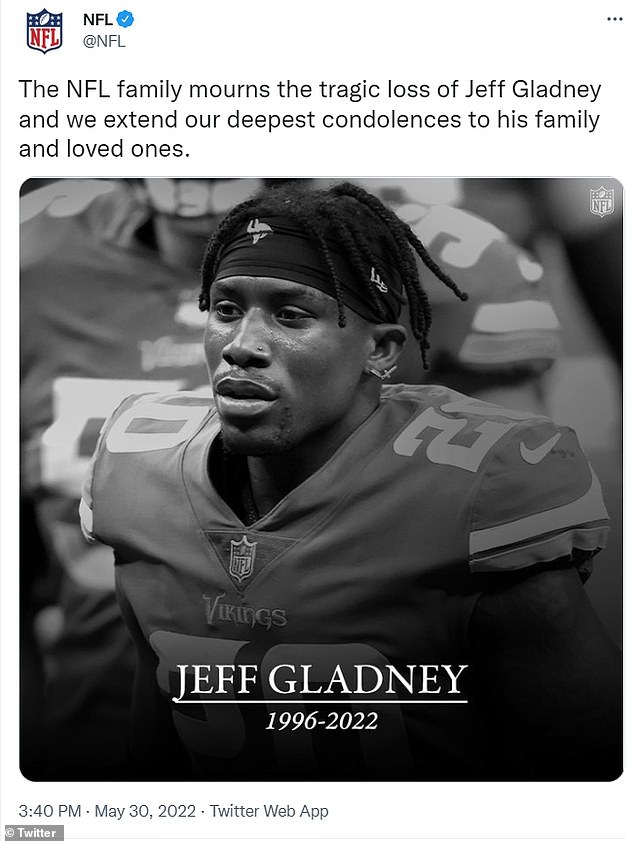 The NFL also mourned the loss of one of its players, extending its condolences to Gladney’s family and loved ones

Former NFL teammates and friends took to Twitter to grieve the player’s death on Monday, sending their condolences to his family.

‘Lost my Brother, my best friend, my right hand man… ain’t too much more I can man damn!’ Philadelphia Eagles wide receiver Jalen Reagor, who played with Gladney at TCU between 2017 and 2019, wrote.

‘This Jeff Gladney news hit me different. Had the privilege of playing with him during his rookie year in Minnesota,’ George Iloka, who played for the Cincinnati Bengals, the Dallas Cowboys and the Minnesota Vikings shared.

‘More bad news…All I could do was hit my knees in tears!!! This is more than a rip post, I lost my brudda!!!! I’m so lost rn,’ Kris Boyd, an ex-teammate of Gladney’s on the Vikings posted.

The NFL also released a statement on the social media platform, saying that the league’s ‘family mourns the tragic loss of Jeff Gladney and we extend our deepest condolences to his family and loved ones.’

Friends, current and former teammates of Gladney’s were in shock upon finding out the news and shared their reactions on Twitter on Monday afternoon

Gladney flourished during his time in college, twice being named as part of the All-Big 12 Honors, as well as being a four-year starter.

He was praised by NFL draft evaluators for his physical style of play prior to being selected by the Vikings in 2020.

Gladney was also the youngest of four children in his family. He was from New Boston, a two-hour-and-a-half drive from Dallas.

He is survived by his only and one-year-old son.