President Joe Biden tested positive again on Friday, as his rebound case of covid drags on and he faces seventh day in isolation.

‘His cough has almost completely resolved,’ O’Connor noted in an update of the president’s condition.

Biden has been appearing at events this week via zoom, including on Wednesday when he joined the first meeting of the interagency Task Force on Reproductive Healthcare Access, which is headed by Vice President Kamala Harris, and, on Thursday, when he held a virtual event with business and labor leaders.

He also delivered an evening speech from the White House residence to announce a U.S. strike had taken out Al Qaeda leader Ayman al-Zawahiri. 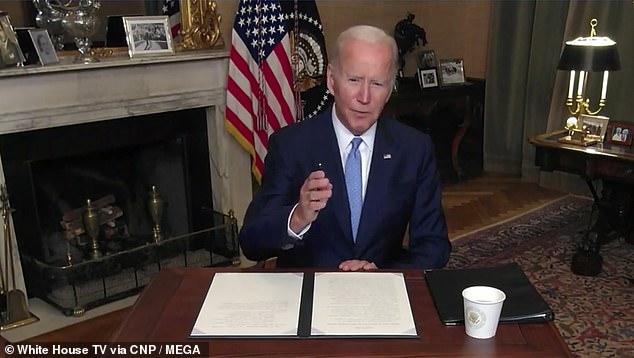 President Joe Biden tested positive again on Friday, as his rebound case of covid drags on and he faces seventh day in isolation 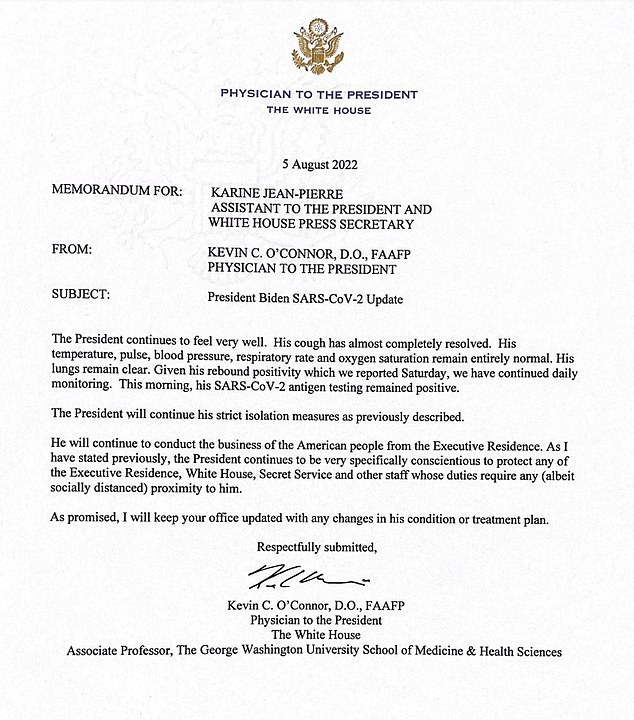 He has shown small signs he’s ready to get out of the second-floor residence of the White House, where he’s been living with his dog Commander as he recovers. First lady Jill Biden is in Delaware.

‘I wish I was with you in person, quite frankly,’ Biden said during a virtual meeting at the White House on Wednesday. ‘But I’m getting there.’

But the White House appears to have been planning for in-person events to return soon.

The White House announced on Friday Biden and first lady Jill Biden will travel to Kentucky on Monday to see the storm damage.

Biden will sign the PACT Act of 2022 in the Rose Garden on Wednesday, the White House announced earlier this week.

The legislation, which expands healthcare for military veterans exposed to toxic burn pits, passed the Senate in an overwhelming 86 to 11 vote on Tuesday evening. The House has already passed it.

And he will sign the CHIPS legislation on Tuesday.

He tested negative on July 27 and returned to work in the West Wing, where he wore a face mask.

He tested positive again on July 30 with a rebound case of covid and has been in isolation ever since.

He last saw first lady Jill Biden on July 20th and has been spending a lot of time with the couple’s dog Commander as he works from his upstairs office.

Biden took Paxlovid during his bout with covid and a small percentage of patients who take the antiviral drug have a rebound case of the virus.