Transit officials are taking what they are describing as the “unprecedented” step of shuttering one of Boston’s four major subway lines for 30 days to allow for track and signal work — the latest in a string of frustrating developments for Boston-area commuters who have suffered through fires, stalled trains and subway slowdowns.

The Orange Line shutdown will begin Aug. 19 at 9 p.m. with service resuming at 5 a.m. Sept. 19. The announcement comes as the Federal Transit Administration has stepped up oversight of the Massachusetts Bay Transportation Authority.

Gov. Charlie Baker said Wednesday that the work will result in “long-term benefits on a much shorter time frame” for riders.

“These 30 days will also provide the T with the opportunity to accomplish a large amount of work that will result in substantially improved service for riders, fewer delays and faster Orange Line trips,” he said. “At the end of those 30 days, we also anticipate that the entire Orange Line will be a fleet made up primarily of new cars.” 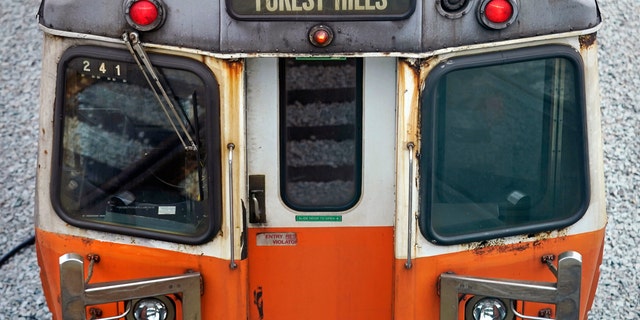 An older subway car, with spots of rust on the exterior shell, is parked with lights on at the Orange Line’s Wellington Station train yard in Medford, Mass. Transit officials are taking what they describe as the "unprecedented" step of shuttering one of Boston’s four major subway lines for 30 days to allow for track and signal work.  (AP Photo/Charles Krupa)

The Orange Line provides riders with access to popular tourist destinations in the city including Faneuil Hall Marketplace, the birthplace of Benjamin Franklin, the Paul Revere House, the Old North Church, the Old State House and the site of the Boston Massacre.

MBTA General Manager Steve Poftak called the decision to shut down an entire subway line for a month “unprecedented” but said it will give workers access to the tracks 24/7, rather than trying to squeeze repairs in during overnight hours and weekend shutdowns.

He said improvements — including work replacing 3,500 feet of 38-year-old Orange Line tracks that could take five years to finish using overnight and weekend hours — will be accomplished during the 30 days.

When completed, Poftak said the repairs will let the MBTA lift some current speed restrictions, allowing for quicker trips.

“We acknowledge that this will be disruptive,” Poftak said at an afternoon press conference, adding that riders will benefit from safer and improved service when the Orange Line reopens.

During the shutdown, the T will be providing shuttle buses between stations. Poftak also urged riders to consider alternative bus, subway and commuter rail routes.

“We’ve taken the time to listen to riders, sympathize with their frustrations, and we’ve heard them loud and clear that they want bold action to improve the MBTA at the pace they deserve,” he said.

Many of the actions being taken to improve the transit system have been spurred on by the federal oversight, he said.

The decision comes just weeks after flames and smoke were spotted coming from an inbound Orange Line train as it was crossing the Mystic River just north of Boston, prompting some riders to flee through windows with one passenger jumping into the river.