During his confirmation hearing on Thursday, the former mayor of South Bend, Ind., was asked about a tax hike to help fund infrastructure by Sen. Rick Scott, R-Fla.

“Well, I think all options need to be on the table,” Buttigieg said. “As you know, the gas tax has not been increased since 1993, and it’s never been pegged to inflation. And it’s one of the reasons why the current state of the Highway Trust Fund is that there’s more going out than coming in.”

Buttigieg noted that funding transfers have helped make up the difference, but questioned whether Congress would keep doing that. He said that for now, the U.S. needs “a solution that can provide some predictability and sustainability.”

While he did not rule out doing this through a gas tax increase, Buttigieg did question how viable this approach might be in the future if the country moves toward electric cars.

“In the long term, we need to bear in mind also that as vehicles become more efficient and as we pursue electrification, sooner or later there will be questions about whether the gas tax can be effective at all,” he said. 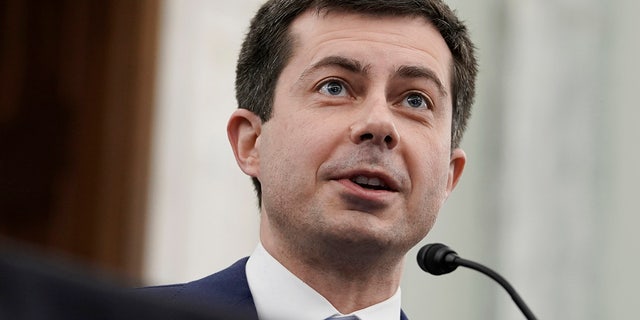 “In the short to medium term,” however, Buttigieg said that a solution “could mean revisiting the gas tax, adjusting it, and/or connecting it to inflation.”

Sen. Mike Lee, R-Utah, brought up the gas tax again later in the hearing, asking if the U.S. has “overextended” itself with the Highway Trust Fund. Buttigieg said there is “a recognition that we don’t have adequate national resources going into roads and highways,” adding that “we need to look into any responsible, viable revenue mechanism we can all agree on to do something about that.”

When asked if this might include raising the gas tax, Buttigieg remained noncommittal, but would not rule it out.

“Well it’s possible,” he said. “Certainly many states have taken that step, including my own, but it’s not the only approach.”

Under questioning from Lee, Buttigieg acknowledged that the gas tax could have a disproportionate effect on the poor.

“Certainly one of the concerns with the gas tax is it’s likely not as progressive as the federal income tax, for example,” Buttigieg said.

A federal gas tax hike has been discussed for years. Members of both parties have supported it in the past, and lawmakers said in 2018 that former President Donald Trump had been in favor of a 25-cent increase.