ESPN’s Adrian Wojnarowski reported early Monday morning that Boston inquired about the former MVP, whose 2021-22 season came to an abrupt end when the Nets were swept by the Celtics in the first-round of the playoffs.

The latest ‘Woj bomb’ doesn’t portray the Celtics as the favorite to land Durant, but it does note that Boston is willing to part with All-Star Jaylen Brown, a talented 25-year-old who has struggled to mesh with the team’s other young star, Jayson Tatum.

Tatum is ‘off limits,’ Wojnarowski reports.

The Miami Heat, Phoenix Suns, and Toronto Raptors are all rumored to have expressed in Durant as well.

While the Celtics’ reported interest is only just surfacing, Wojnarowski reports that Boston’s front office, led by Brad Stevens, has been in regular contact with the Nets brass, which includes general manager Sean Marks.

One potential obstacle to a deal is the Nets’ asking price for the 33-year-old Durant, who was tied for third in the NBA in scoring last season at 29.9 points per game. 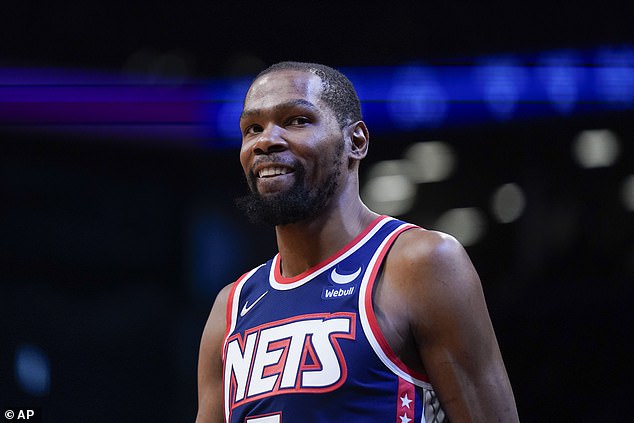 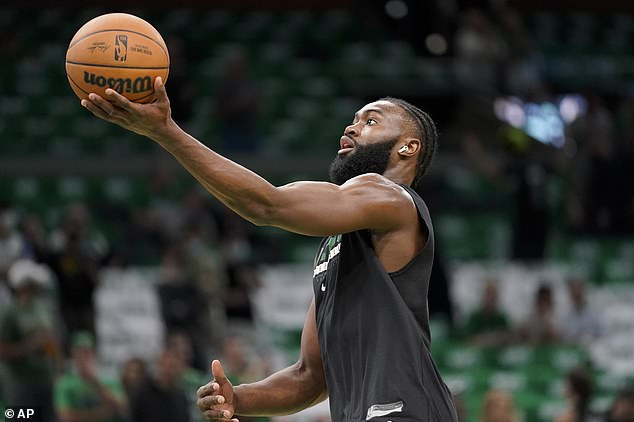 The latest ‘Woj bomb’ doesn’t portray the Celtics as the favorite to land Durant, but it does note that Boston may be willing to part with All-Star Jaylen Brown (pictured), a talented 25-year-old who has struggled to mesh with the team’s other young star, Jayson Tatum

The demand is somewhat similar to the trade that brought Brown to Boston: Brooklyn’s 2013 acquisition of Celtics stars Kevin Garnett and Paul Pierce.

The Nets, under general manager Billy King at the time, relinquished unprotected first-round picks in 2014, 2016 an 2018, as well as additional pick swaps, which allowed the Celtics to draft Brown and Tatum in 2016 and 2017, respectively.

Brooklyn, meanwhile, managed one second-round playoff appearance in Pierce’s only season with the Nets.

Durant still has $198 million and four years remaining on his contract, while Brown has two seasons and $56 million left on his.

Durant’s future in Brooklyn has been complicated by the situation with his current Nets teammate, Kyrie Irving, who opted into the final year and $37 million of his contract to stay with the team, but is rumored to be pushing for his own exit.

The crosstown rival New York Knicks as well as the Los Angeles Clippers and Lakers, as well as the Philadelphia 76ers would be interested in acquiring Irving, according to various reports. 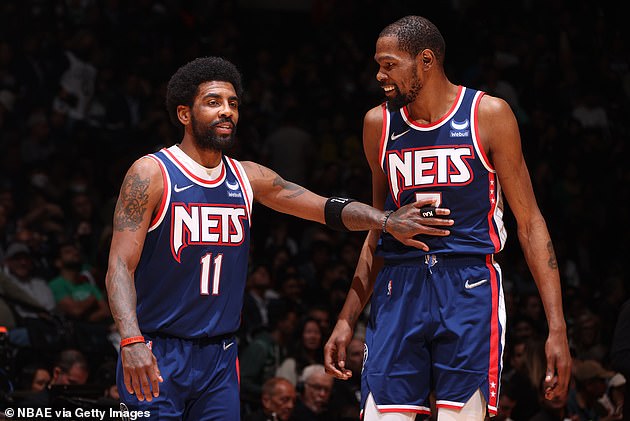 Kyrie Irving’s days in Brooklyn may be numbered despite the All-Star guard’s previous statements assuring Nets fans he doesn’t ‘plan on going anywhere.’ Irving (left) joined the Nets in 2019 with Kevin Durant (right) but the two have failed to meet expectations in Brooklyn

The Lakers are the most intriguing option given Irving’s history with LA star LeBron James, his former Cleveland Cavaliers teammate. The two famously won a title together in Cleveland, coming back from a 3-1 Finals deficit against the Golden State Warriors in 2016 to capture the club’s first championship, but the relationship fizzled soon after.

Irving ultimately asked for a trade in 2017, and the team complied, sending him to the Boston Celtics. As ESPN reported at the time, the New Jersey native no longer wanted to play alongside James, citing a desire to be a team’s focal point. The two have remained hospitable when facing off on the court and are typically seen greeting each other with a hug.

An unceremonious departure from Brooklyn would be the third of Irving’s career, following Cleveland and, ultimately, Boston.

After two strong seasons with the Celtics, Irving walked back a pledge to re-sign with the team to ink a deal with the rival Nets, along with Durant, in July of 2019.