Passengers at an airport in Charlotte, North Carolina, faced hot and miserable conditions after a pair of unexpected maintenance and weather issues delayed their flight for nearly six hours over the weekend.

Passengers of American Airlines Flight 327, which was traveling from Charlotte Douglas International Airport (CLT) to New York (JFK), had already boarded the plane ahead of their scheduled departure time of 1:07 p.m. ET on Sunday when they were notified that the flight crew detected a mechanical issue that prevented them from taking off.

The passengers were told their departure would be delayed and were instructed to wait, an American Airlines spokesperson told Fox News Digital.

“The aircraft remained at the gate with the jet bridge attached” with “the preconditioned air duct hooked up and the boarding door open,” the spokesperson said as the flight crew “attempted to resolve the issue.” 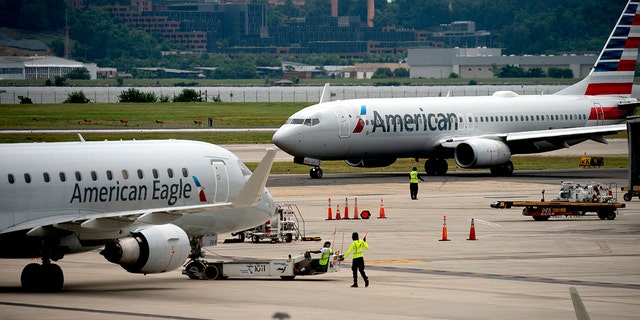 About 2.5 hours later, the passengers were asked to leave the aircraft.

The delay was longer than their expected flight time as a nonstop flight from Charlotte to New York takes about 1 hour, 55 mins.

“Shortly before 3:50 p.m., customers were asked to deplane and were transferred to another aircraft, which began boarding around 4:30 p.m. ET,” the spokesperson added. 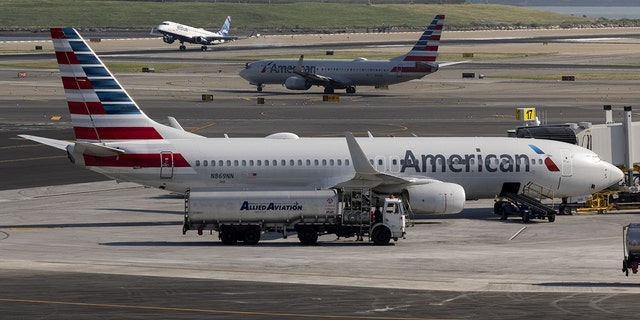 American Airlines planes at LaGuardia Airport (LGA) in the Queens borough of New York, US, on July 1, 2022. (Angus Mordant/Bloomberg via Getty Images)

The passengers boarded the second plane, which also could not depart — for another 1.5 hours.

“Due to lightning in the vicinity, the flight was unable to safely push back from the gate until 5:58 p.m. ET. During that time the jet bridge remained attached and the forward boarding door remained open,” the spokesperson said.

A reporter for The Charlotte Observer, who just happened to be on the flight, detailed how the extended delay was just too much for some passengers to handle. She said a passenger on the flight had a “mental breakdown” due to lack of air conditioning, food and drink service.

The reporter, Genna Contino, said the air conditioning was turned off to save fuel. She said it was only turned back on after “people started sobbing and having panic attacks.”

The American Airlines spokesperson told Fox News Digital the passengers “had the opportunity to deplane” at any time while the plane remained at the gate.

CLICK HERE TO GET THE FOX NEWS APP HERE

“We know it can be frustrating when travel doesn’t go as planned, and apologize to our customers for the inconvenience,” American Airlines said after the incident.

Air travel has been especially difficult for passengers in the past several months. Millions of fliers have been plagued by delays and cancellations.