Quick — what do these three things have in common: Chicago teenagers, thousands of boxes of cereal and the country of Ukraine?

The answer is — unexpected.

And something positive, it turns out.

A group of teenagers in Chicago wanted to do something surprising — and something helpful to others.

So, armed with boxes of popular breakfast cereal that they collected through a donation effort, a group of students for local high schools in Chicago created a mosaic designed to look like the Ukraine flag.

And in the process, they not only broke a Guinness World Record — they raised money for Ukraine, which was invaded by Russia on Feb. 24 and has been continuing to battle for its very survival. Sunday, August 14, marks day 172 of the invasion.

As a bonus, the teens are also helping out the needy in Chicago by donating the cereal.

The Kellogg’s company donated the boxes — about 5,000 of them, approximately.

And the teens, who are members of the Chicago Children United for Ukraine, according to Reuters, created a gigantic cereal mosaic on the floor of the Wintrust Financial Corporation’s Grand Banking Hall in downtown Chicago.

For the yellow in the flag, they used yellow Corn Pops boxes.

For the blue in the flag, they used blue Rice Krispies boxes.

In this way, they recreated a depiction of the Ukrainian flag.

“It’s a math problem, really, but we wanted to beat the Guinness Book of World Records,” said Sherry Koppel, the project’s art consultant, according to Fox 32 in Chicago.

“The kids did it, and they did it fast.”

“We decided to break a record with a good cause behind it.”

“We wanted to raise awareness for Ukraine,” said one student, Michael Kotcher, as Reuters noted.

“So, we decided to break a record with a good cause behind it.”

The good cause includes Ukraine — but also, the cereal boxes are being donated to a local food bank. 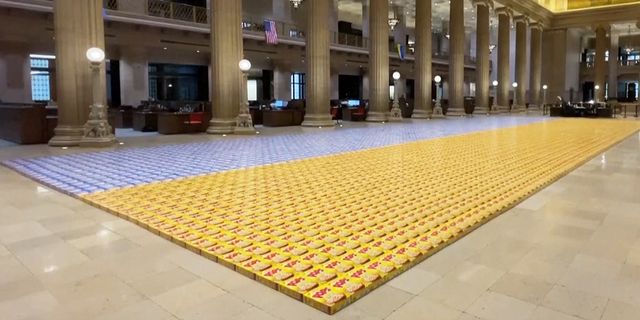 Kellogg’s donated the cereal boxes for the Chicago teens to create this record-breaking flag mosaic as a fundraiser.  (Reuters)

Donors pledged approximately $15,000 to the fundraiser so far.

FOOD BANKS ARE ALREADY WORRIED ABOUT FALL, WINTER — SOME FAMILIES MAY NOT HAVE TURKEYS THIS YEAR

The teens broke the Guinness World Record for the “Largest Packaged Food Mosaic of a Flag.”

On their website, the teens explained ahead of breaking the record, “We are raising funds to support the people of Ukraine through Razom, as well as fighting hunger here in Chicago by attempting to set a new world record for the largest cereal box mosaic.” 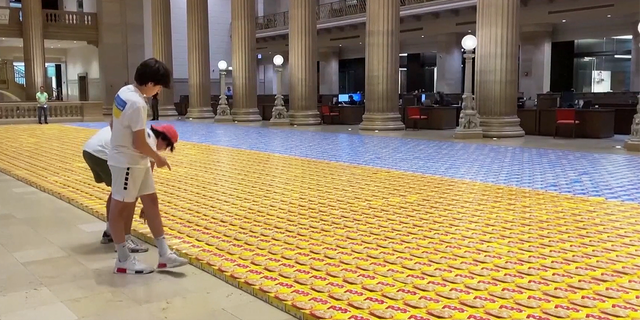 The Chicago students built their mosaic out of cereal boxes over a three-day period, from August 10 to August 12.  (Reuters)

They also wrote, “Kellogg’s has generously donated 5,000 boxes of cereal (Rice Krispies and Corn Pops) that we will use to create the Ukrainian flag and break the current Guinness World Record.”

“Once the mosaic is completed, Kellogg’s will donate the cereal to the Greater Chicago Food Depository.” 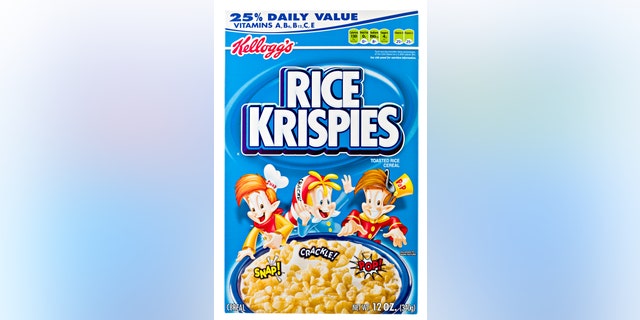 A view of a 12-ounce blue cardboard box of Kellogg’s Rice Krispies. Kellogg’s, headquartered in Battle Creek, Michigan, sell its cereals and convenience foods all over the world. The Chicago students used Rice Krispies boxes for the blue color tones in their Ukraine flag mosaic. (iStock)

The previous record for this particular achievement in the Guinness World Record book included 4,000 cereal boxes.

“We love cereal so much,” one of the students said — which is why they picked cereal boxes to create the flag mosaic.

The group of students thanked their sponsors for their help. 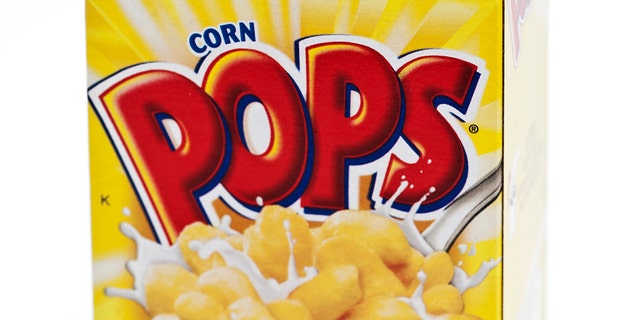 The students in Chicago used the yellow Corn Pops boxes in their Ukraine flag mosaic this past week. (iStock)

Sponsors included Wintrust Financial Corporation, which donated its Grand Banking Hall temporarily to the project; Kellogg’s, which donated the cereal boxes through its Better Days Commitment; and Sherry Koppel, who donated her “time and expertise” to help the teens lay out the Ukrainian flag for the mosaic.

The cereal boxes were going to be distributed the food banks as soon as the project was taken down.

Reuters and Fox32 contributed reporting to this article.