Out-of-control Chinese rocket booster will hurtle back to Earth on Saturday and could hit land in inhabited areas – with debris potentially coming down over Asia, Africa or North America

An out-of-control Chinese rocket booster will hurtle back to Earth this weekend – and could hit land in populated areas in Asia, Africa or North America, experts say.

The falling space debris is the result of the Long March 5B launch on July 24 to deliver the Wentian module to China‘s Tiangong Space Station.

Weighing around 22 metric tons (about 48,500 lb), it’s set to re-enter the Earth’s atmosphere at 18:26 BST on Saturday, give or take six hours either way, according to Aerospace Corporation

The US nonprofit, which is tracking the debris, has highlighted a huge area of Earth where the debris could fall, but said it’s still exactly where is unknown.

As of Friday afternoon, the most recent prediction suggests it will re-enter over China, but ‘it is too soon to predict a meaningful debris footprint’, the firm told MailOnline.

Western Europe (including the UK) is not included in the area, meaning Brits are unlikely to see debris rain down this weekend. 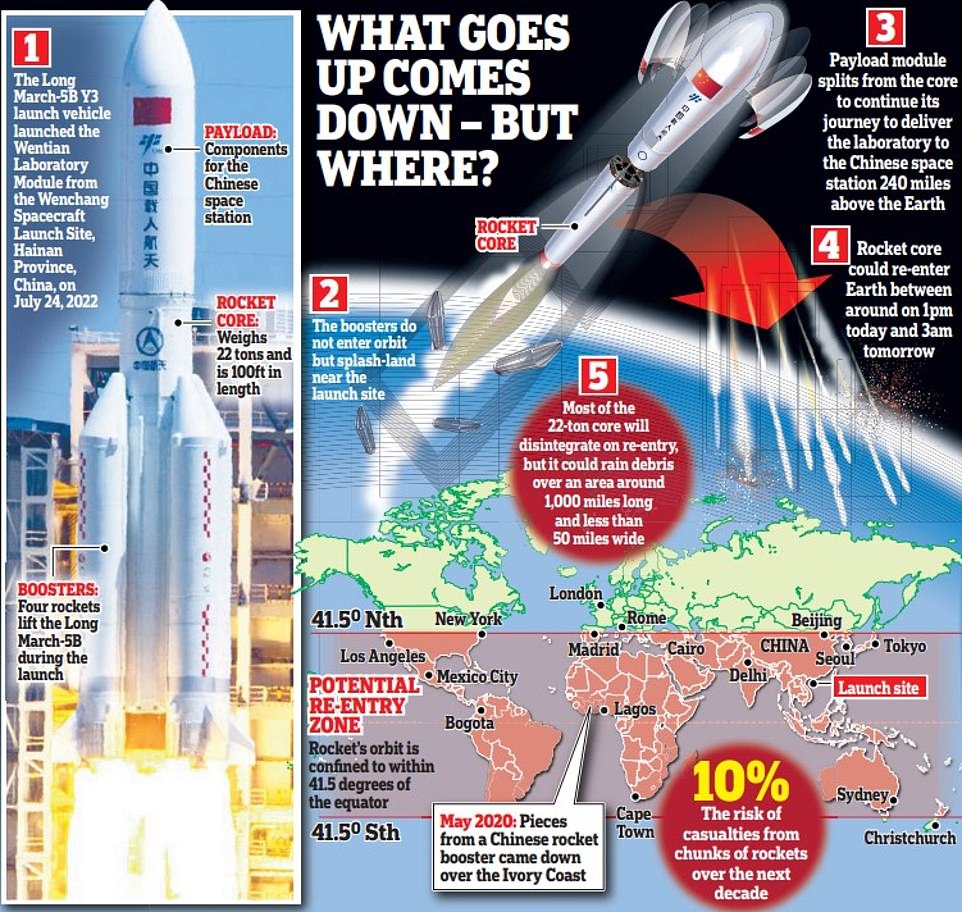 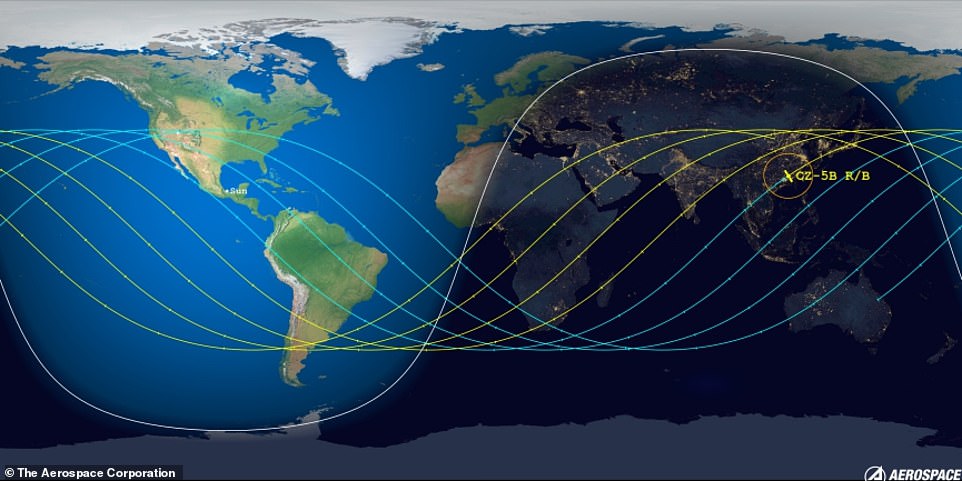 Our latest prediction for #CZ5B rocket body reentry is:
🚀30 Jul 2022 18:26 UTC ± 6 hours
Reentry will be along one of the ground tracks shown here. It is still too early to determine a meaningful debris footprint. Follow this page for updates:  https://t.co/SxrMtcrMrspic.twitter.com/mjg0F8k1qX

According to Aerospace Corporation, 18:26 BST on Saturday is the centre of a predicted re-entry window with six hours either side, so it could also hit Earth Saturday lunchtime UK time (12:26) or in the early hours of Sunday (00:26).

Given that almost all of this 12-hour-long window is during Saturday, it seems re-entry is more likely to be Saturday than Sunday.

On Sunday (July 24), China launched a new module for its space station on a Long March 5B rocket.

Unfortunately, the rocket’s booster – which weighs 22 metric tons (about 48,500 lb) – has already reached low orbit and is expected to tumble back toward Earth.

Aerospace Corporation says the rocket booster is set to re-enter the Earth’s atmosphere at 18:26 BST on Saturday, give or take six hours either way.

Aerospace Corporation said ‘there is a non-zero probability’ that the debris will land in a populated area – in other words, it’s not impossible so it could happen.

As the debris gets closer and closer to Earth, predictions of when it will hit get more and more accurate.

The firm had previously estimated re-entry to be at 00:24 BST on Sunday, in an area that covers more than 88 per cent of the world’s population.

Aerospace Corporation told MailOnline on Friday afternoon that it’s now less than 88 per cent, although it couldn’t give a ‘meaningful prediction now given the uncertainties’.

However, its new map shows Africa, India, Australia, Central America, South America and North America and more are still in the danger zone.

Aerospace Corporation said ‘there is a non-zero probability’ that the debris will land in a populated area – in other words, it’s not impossible so it could happen.

‘A re-entry of this size will not burn up in the Earth’s atmosphere,’ said Aerospace Corporation, which is based in El Segundo, California.

‘The general rule of thumb is that 20-40 per cent of the mass of a large object will reach the ground, though it depends on the design of the object.’

But according to Aerospace Corporation consultant Ted Muelhaupt, the overall risk to people and property on the ground is fairly low, as 75 per cent of Earth’s surface in the potential re-entry area is water, desert or jungle.

Speaking during a briefing livestreamed to Twitter on Thursday, Muelhaupt also said there’s a ‘99.5 per cent chance that nothing will happen’.

‘Personally, if this were coming down on my head, I’d run outside with a camera to watch it, because I think it would be more of a visual [opportunity] than an actual risk,’ he said.

Jonathan McDowell, an astronomer at the Harvard-Smithsonian Center for Astrophysics, added: ‘The worst case in this event is going to be less serious than a single cruise missile strike that we’ve been seeing every day in the Ukraine war, so let’s put it in some perspective here.’

It’s possible part of the 21-ton Long March 5B rocket may fail to fully burn up as it re-enters Earth’s atmosphere.

It would then plummet to the surface in an uncertain location and at great speed – several hundred miles per hour.

The problem with China’s rockets is rooted in the risky design of the country’s launch process.

Usually, discarded rocket stages re-enter the atmosphere soon after liftoff, normally over water, and don’t go into orbit. However, the Long March 5B rocket does. 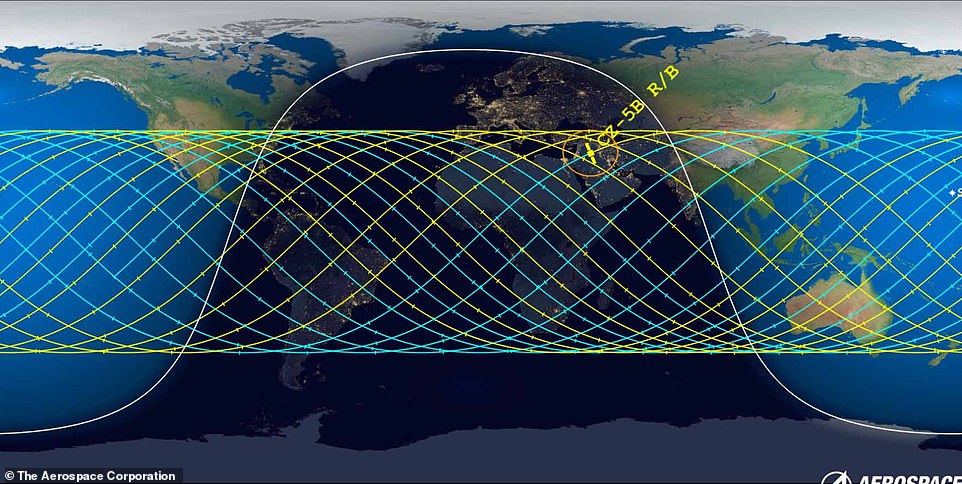 The firm had previously estimated re-entry to be at 00:24 BST on Sunday, over the Middle East 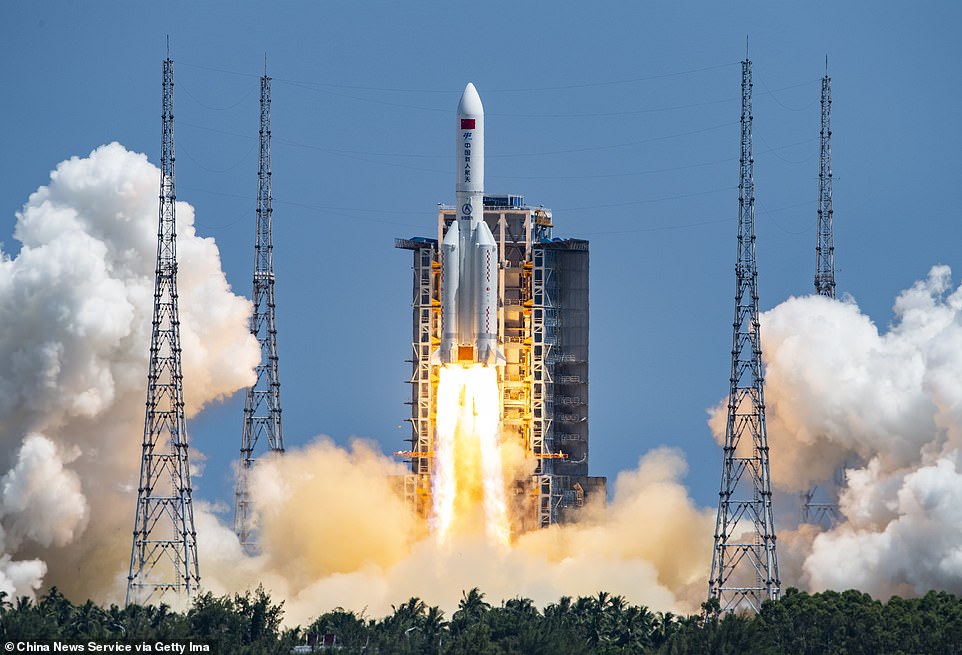 China has previously rejected accusations of irresponsibility, with the Chinese Foreign Ministry saying the likelihood of damage to anything or anyone on the ground is ‘extremely low’.

Many scientists agree with China that the odds of debris causing serious damage are tiny, although others think launch designs like the Long March 5B pose an unnecessary risk.

Last May, one of the country’s Long March 5B rockets broke up on re-entry above the Indian Ocean, north of the Maldives.

The Long March 5B had sent Tianhe, the first building block of China’s new space station, into orbit in April.

There were concerns that it could smash into a populated area on land, although it ultimately fell into the ocean.

NASA Administrator Bill Nelson criticised Beijing and insisted it was ‘critical’ for China and other countries to ‘act responsibly and transparently in space’.

‘Spacefaring nations must minimise the risks to people and property on Earth of re-entries of space objects and maximise transparency regarding those operations,’ he wrote in a statement. 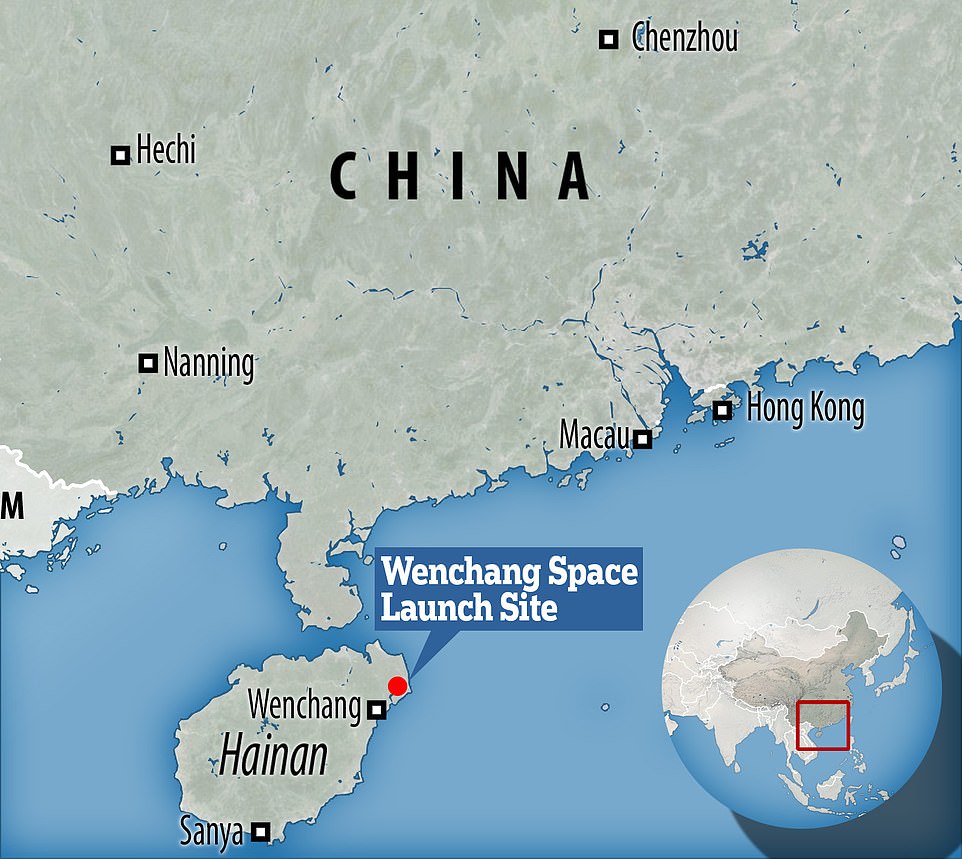 The Wenchang Space Launch Center, from which the Wentian module was launched on July 24, is a rocket launch site on the island of Hainan, China 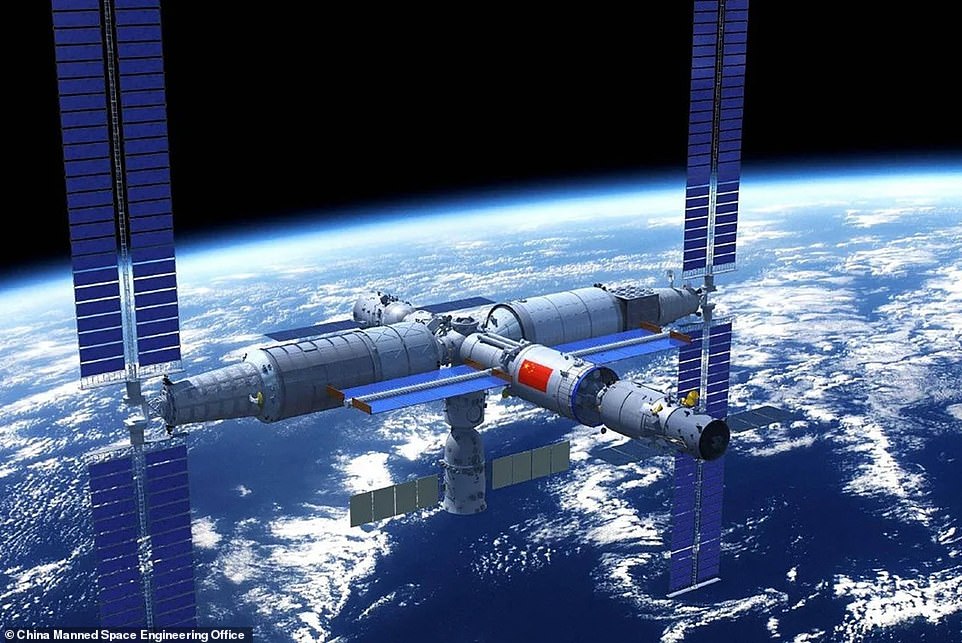 China’s Tiangong space station, currently under construction, is seen in this artistic rendering

Wentian, a research lab dedicated to science and biology experiments, has already docked with the main body of the space station, called Tianhe.

It is set to be followed by a second research lab module, Mengtian, due to be launched in October this year.

When Mengtian attaches to the rest of Tiangong, the space station’s construction will finally be complete, although Beijing also plans to launch Xuntian, a space telescope that would co-orbit with the space station, in 2024.

Tiangong (meaning ‘heavenly palace’) will rival the ageing International Space Station (ISS), which is operated by the space agencies of the US, Canada, Russia, Japan and Europe.

It will comprise three modules, although another two spacecraft – Shenzhou and Tianzhou – which transport crew and cargo respectively, can also dock at the station.

Once completed, Tiangong space station will weigh some 66 tons, far smaller than the ISS, which launched its first module in 1998 and weighs around 450 tons.

It is expected to have a life span of at least 10 years.

Tiangong is comprised of several different modules that are launching one by one.

In July 2022, Wentian, a smaller module where research experiments will take place, attached to Tianhe.

In October 2022, a second research lab module, Mengtian, will also attach to Tianhe. When it does, the Tiangong space station will be complete.

Another two spacecraft that can dock at the station – Shenzhou and Tianzhou – respectively transport crew and cargo, and aren’t considered part of the station itself.

China also plans to launch Xuntian, a space telescope that would co-orbit with the space station, in 2024. 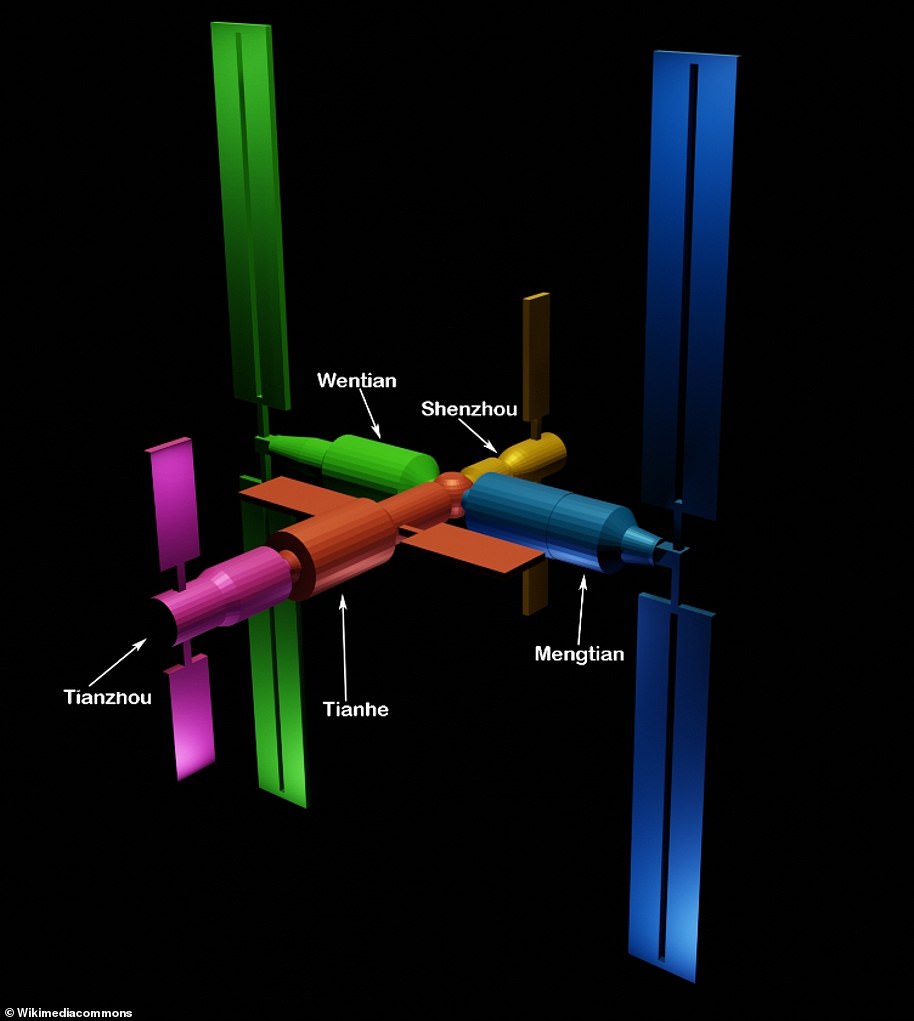