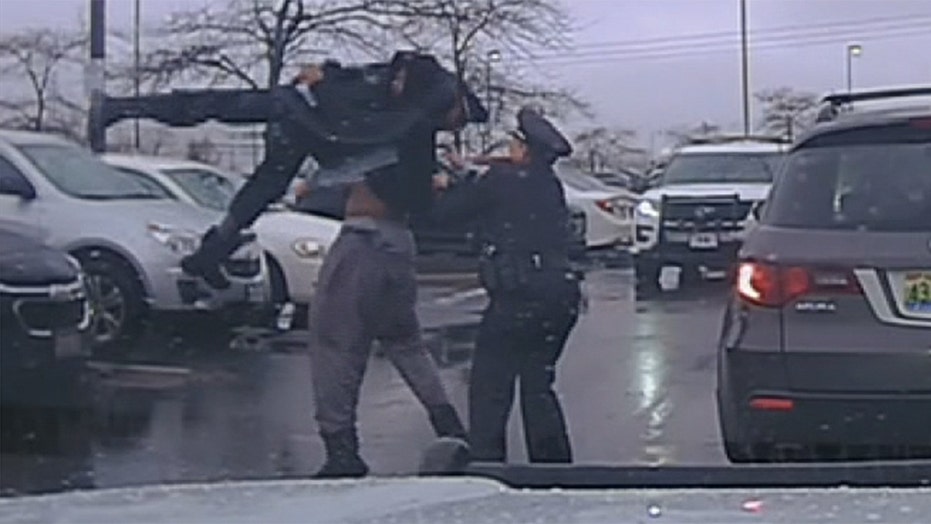 Raw video: Dash cam footage appears to show an Eastern Kentucky football player getting into an altercation with Ohio police officers during a traffic stop.

An altercation between a college football player and Ohio police officers Monday during a traffic stop ended up with the man slamming one of the officers, dashcam video shows.

Michael Harris, a linebacker for Eastern Kentucky University, was seen on the video in a parking lot near what appeared to be his SUV. As a Grove City police cruiser pulled up, the dashcam video showed Harris and another officer talking to each other.

Harris at one point put his hands up while being patted down. More words were exchanged and one officer appeared to put one of his hands on the back of the player’s head. Harris then tried to get back into the vehicle, but was pushed away and officers tried to arrest the man.

After one of the officers appeared to strike Harris, the redshirt sophomore picked the officer up and slammed him to the ground. An additional officer came over to help, and another officer took something out of a holster before putting it back in and trying to pull Harris off.

The university told Fox News on Thursday that it had suspended Harris "from all team and football-related activities at this time," adding, "When the facts are established, and the investigation complete, Eastern Kentucky University and EKU Athletics will decide how to move forward responsibly."

Police originally had been called to the area because a local business reported an aggressive man who didn’t work there and wouldn’t leave, WBNS-TV reported, citing sources.

The police officer was unhurt.

Harris played 11 games at Auburn in 2019 before transferring to Eastern Kentucky.