Cycling at the Commonwealth Games was struck by another horrifying crash on Sunday afternoon that saw England’s Matt Walls catapulted over the barrier into the crowd, leaving athletes and spectators requiring urgent medical attention.

In the second qualifying heat of the men’s 15km scratch qualifying, there was a multi-rider crash and England’s Matt Walls flew over the barrier and into the crowd, with his bike.

Fellow racer Matt Bostock was taken away on a stretcher, while 24-year-old Walls received treatment for more than 40 minutes before being taken away by ambulance.

British Cycling confirmed on social media that Walls and Bostock were taken to hospital. Canada’s Derek Gee also hit the top of the barrier and while he didn’t follow Walles over the top and into the crowd, he fell heavily backwards.

‘We send our best wishes to the riders and spectators involved in the incident and will provide a further update when we can,’ British Cycling posted on Twitter. Team England added: ‘Matt is alert and talking – as he has been throughout – and is being given medical attention in hospital.’

Spectators were also hurt after Walls and his bike had come over the top of the barriers on the high banking of the corner.

The 24-year-old Olympic omnium champion was trying to avoid riders who had fallen in a crash lower down the banking but as he rode up, he clipped another wheel and went over the top. 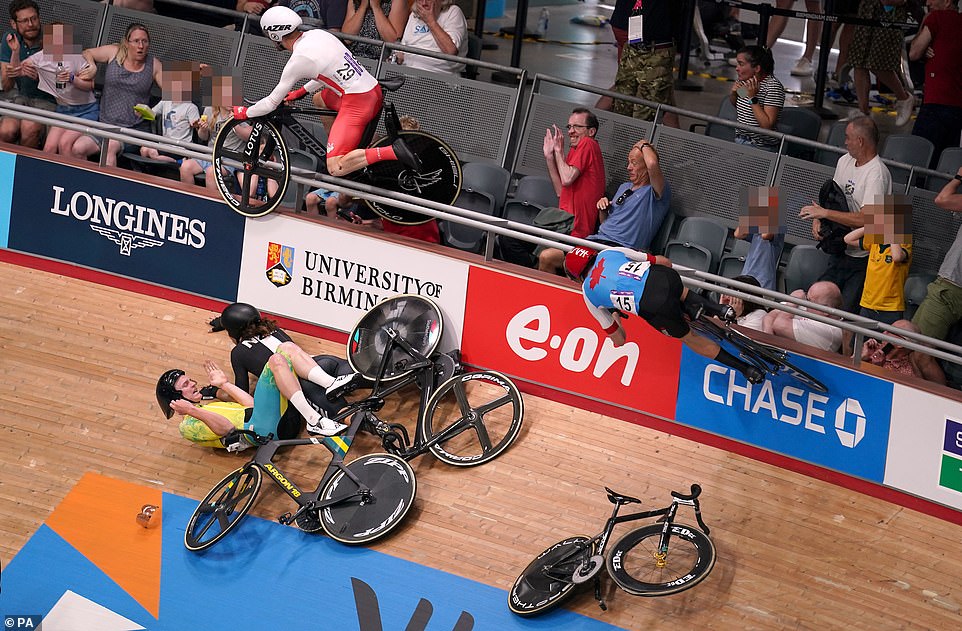 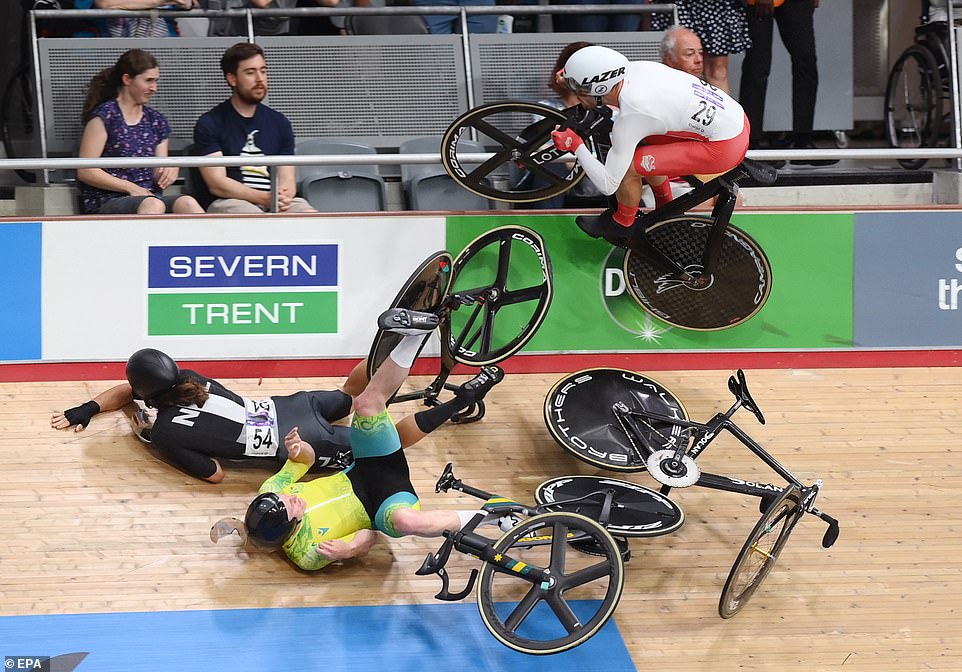 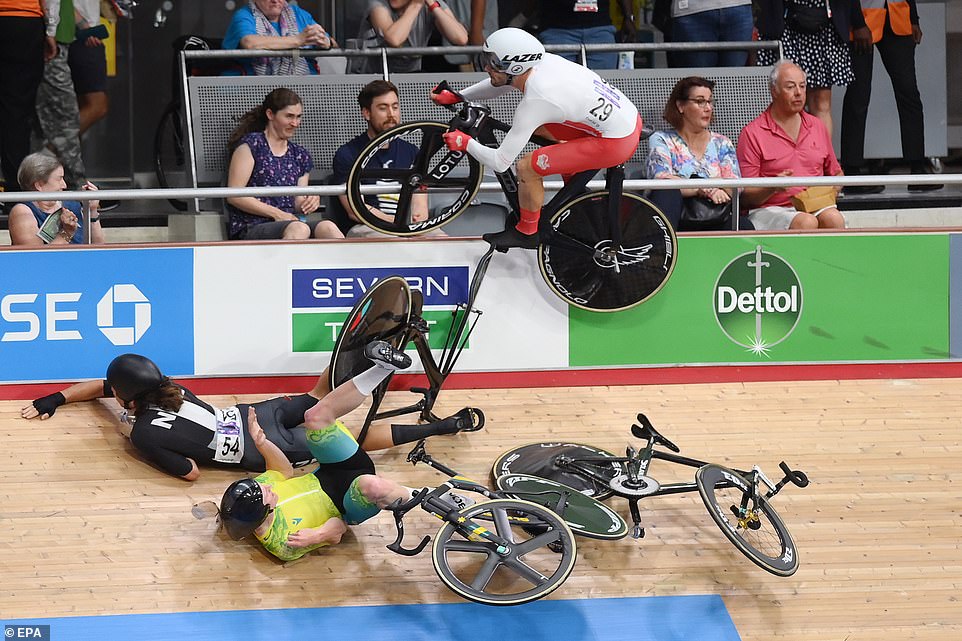 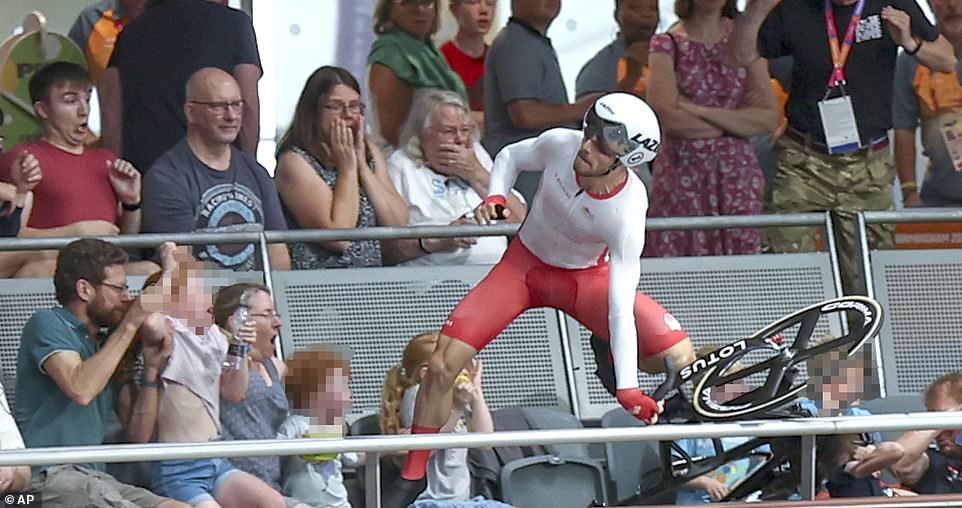 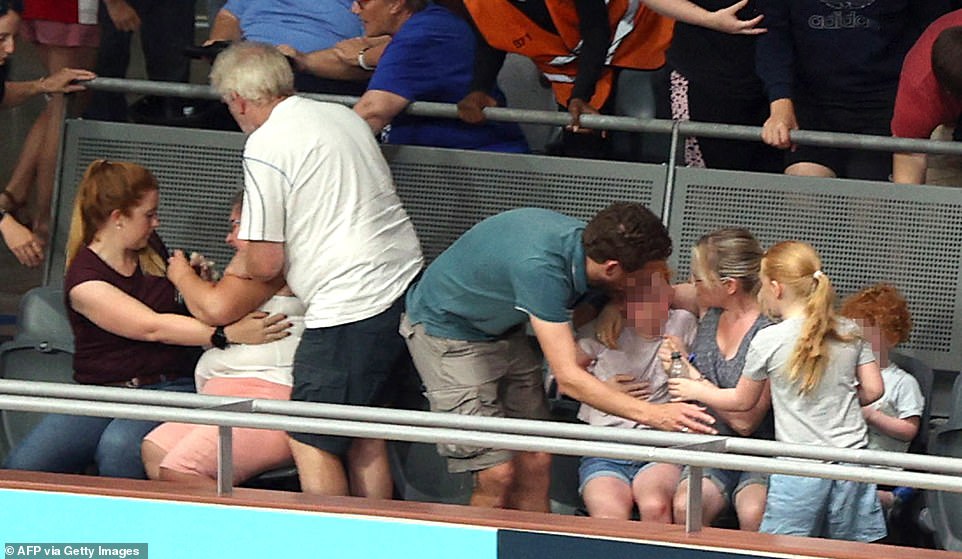 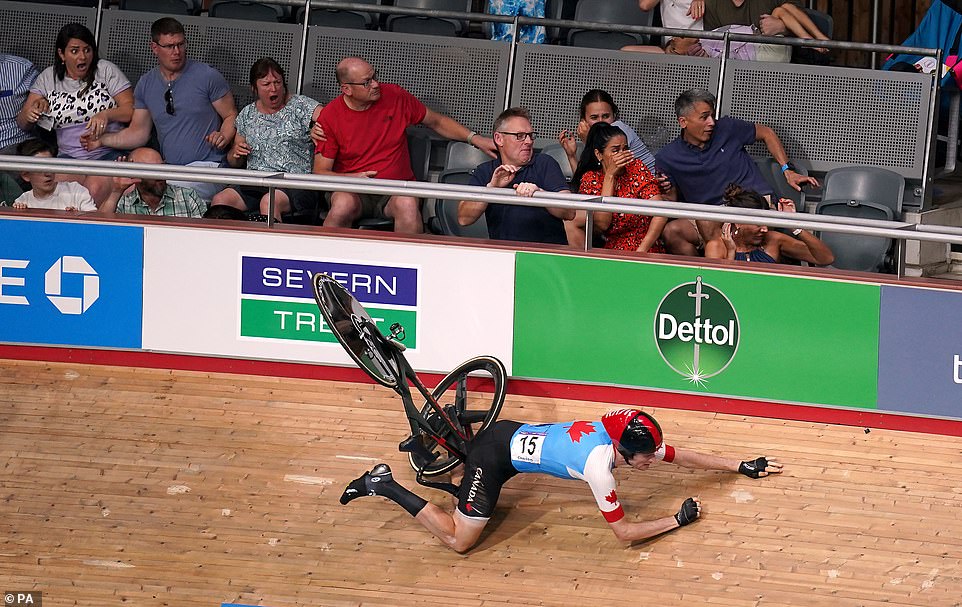 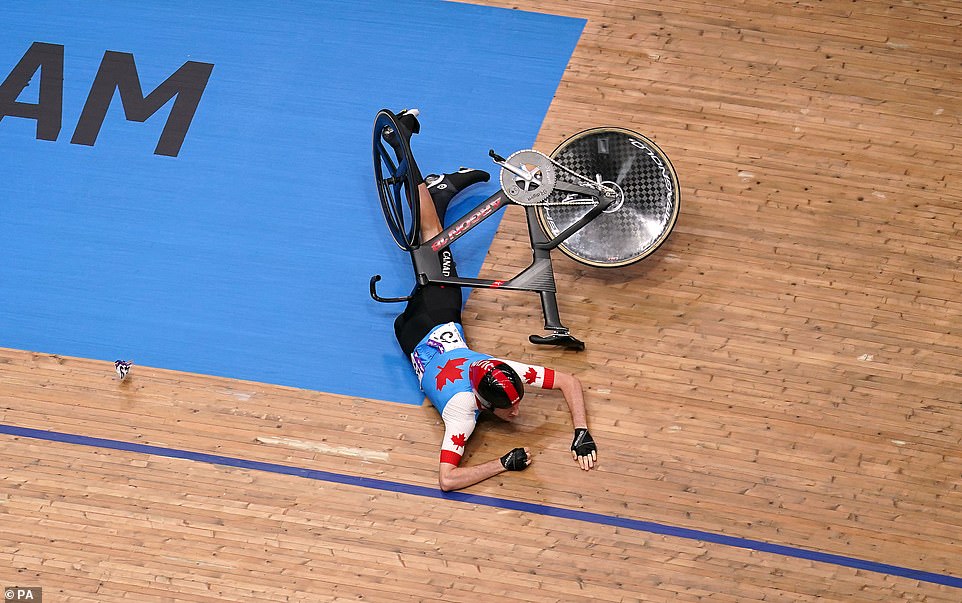 Witnesses said that, because of the gradient of the banking, spectators in the front row had been unsighted for the crash.

The spectators were treated on site by paramedics for minor injuries but did not need hospital treatment.

One man received treatment for cuts to his arm while a young girl also received attention, while another member of the crowd has been taken away in a wheelchair covered in blood.

Following the collision, the remainder of this session at the velodrome was abandoned and only one sprint race was to come before a break.

The remainder of the morning session at the velodrome was cancelled and spectators were asked to leave as medical staff attended to Walls.

Walls and Bostock were both treated by medics before being taken to hospital alongside Derek Gee, while two spectators needed treatment at the scene but did not go to hospital.

A Team England spokesperson said: ‘Matt is alert and talking (as he has been throughout) and is being given medical attention in hospital.’ 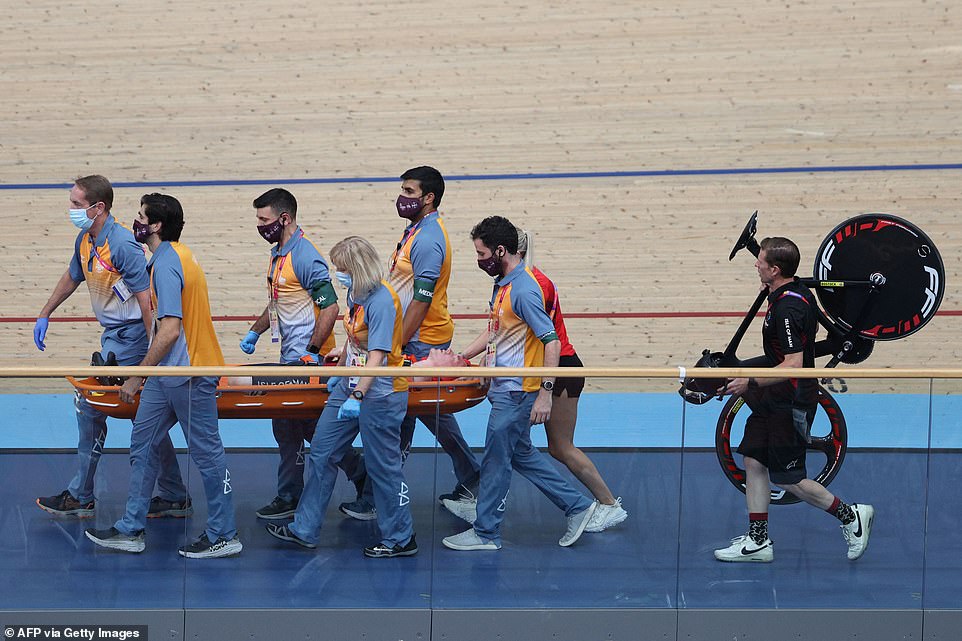 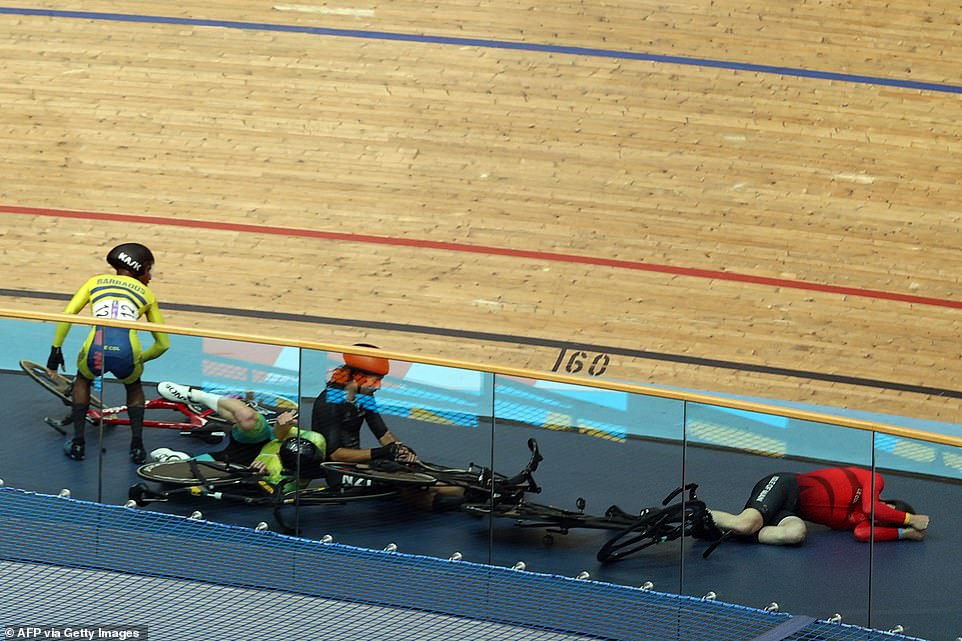 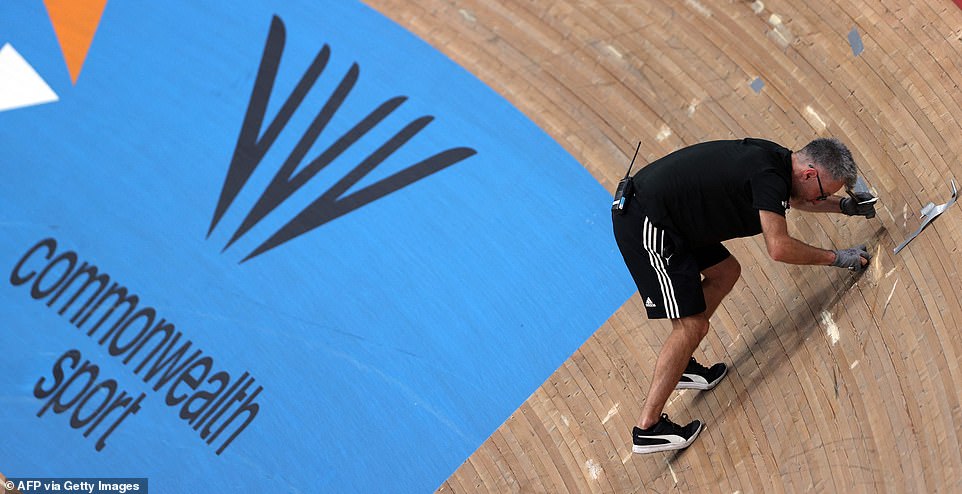 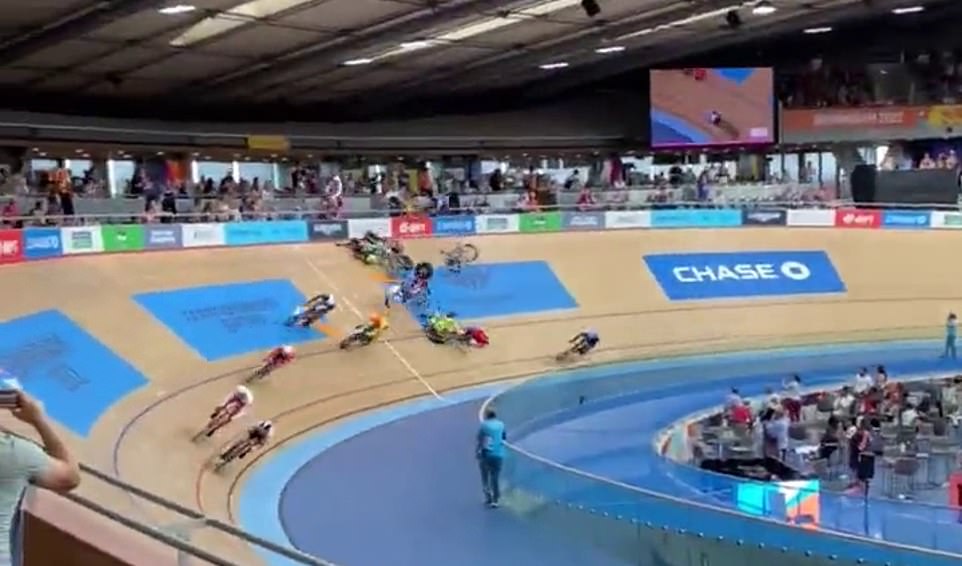 England’s race team have tweeted: ‘Thoughts are with all the riders involved in the crash in the velodrome.’

Scottish Cycling said: ‘Unfortunately we have just witnessed another big crash at the velodrome. Kyle Gordon was taken down but thankfully got up and got back on this bike.

‘Our thoughts with the two riders who are receiving medical attention.’

Welsh Cycling added: ‘Sending our love and best wishes to those injured in the crash at the Velodrome today. On behalf of all of us at Welsh Cycling we hope for a speedy recovery.

‘We can confirm that Will Roberts is ok, and was not involved in the accident.’

Huge highspeed collision with multiple involved at #velopark. Matt Walls of England jumped over the barriers into the crowd. #Brimingham2022pic.twitter.com/xl19aFbicc

The next session is due to start at 3pm as scheduled, however an update will be provided as soon as possible if that situation changes.

This come on the back of England cyclist Joe Truman was knocked unconscious following a horrific crash when riding at 45mph in the keirin, as his old housemate Jack Carlin went on to win a silver for Scotland.

Truman suffered a broken collarbone in the collision, with the 25-year-old sent flying on the final lap of the keirin semi-final after riding into Australian Matthew Glaetzer, who had tumbled to the deck in front of him.

Truman had nowhere to go when Glaetzer touched wheels with Carlin in the second round of the event, sending the Englishman flying straight over the top of the Aussie at 45mph before slamming into the hard flooring. 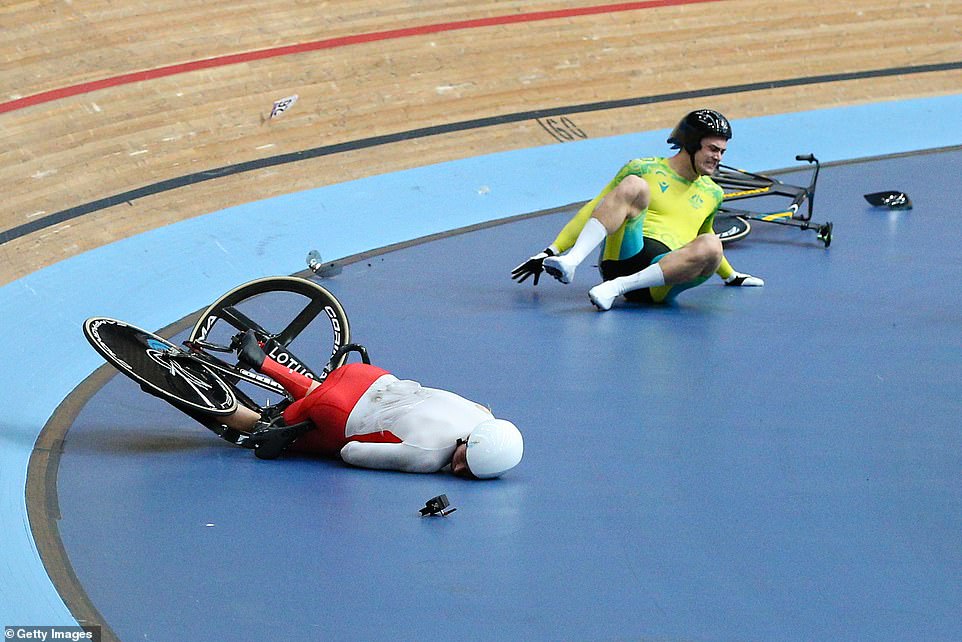 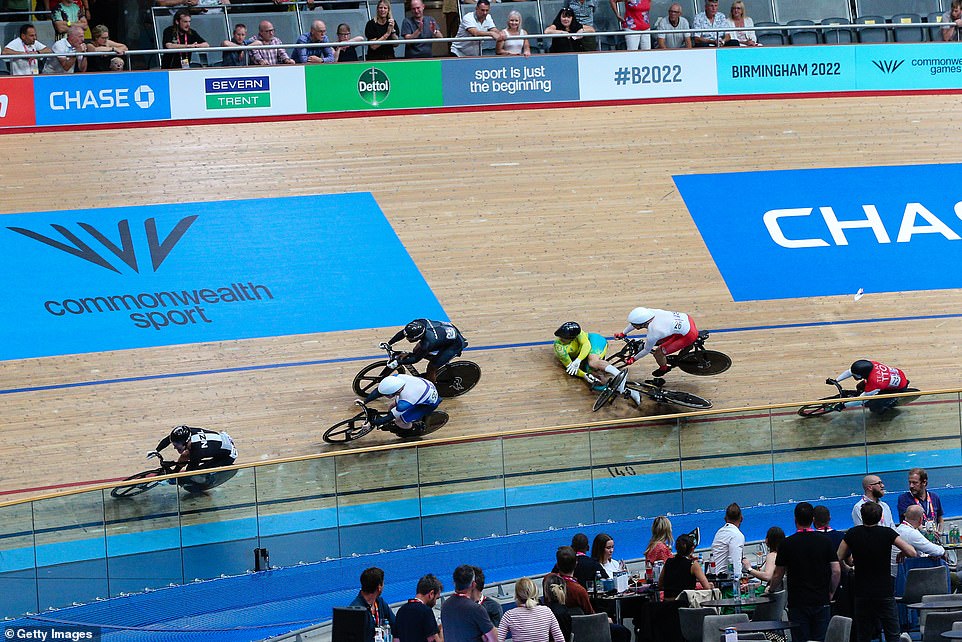 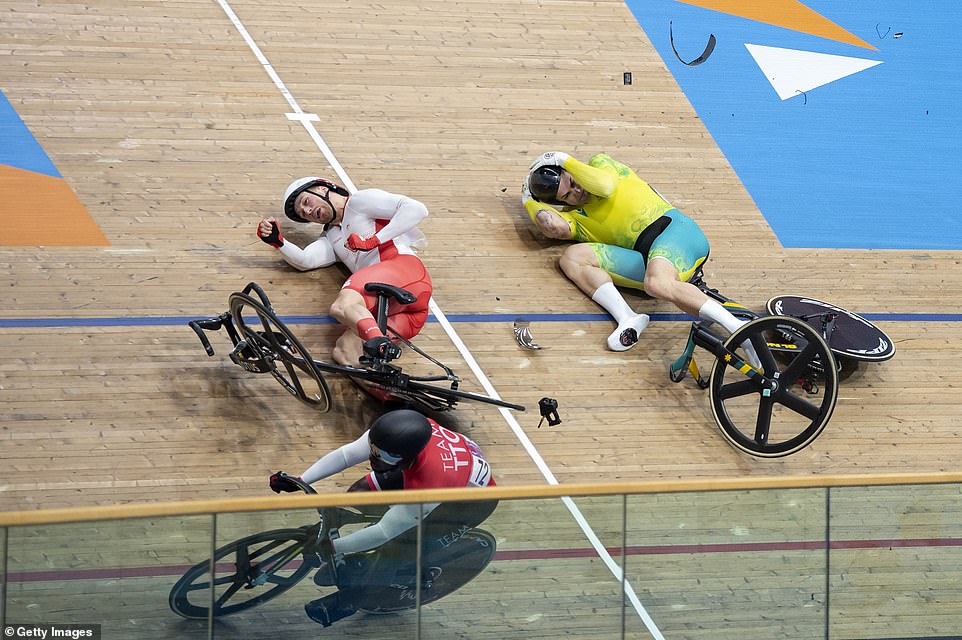 Matthew Glaetzer of Team Australia and Joe Truman of Team England crash during the Men’s Track Cycling Keirin Second Round Heat One on day two of the Birmingham 2022 Commonwealth Games at Lee Valley Velopark Velodrome on July 30, 2022 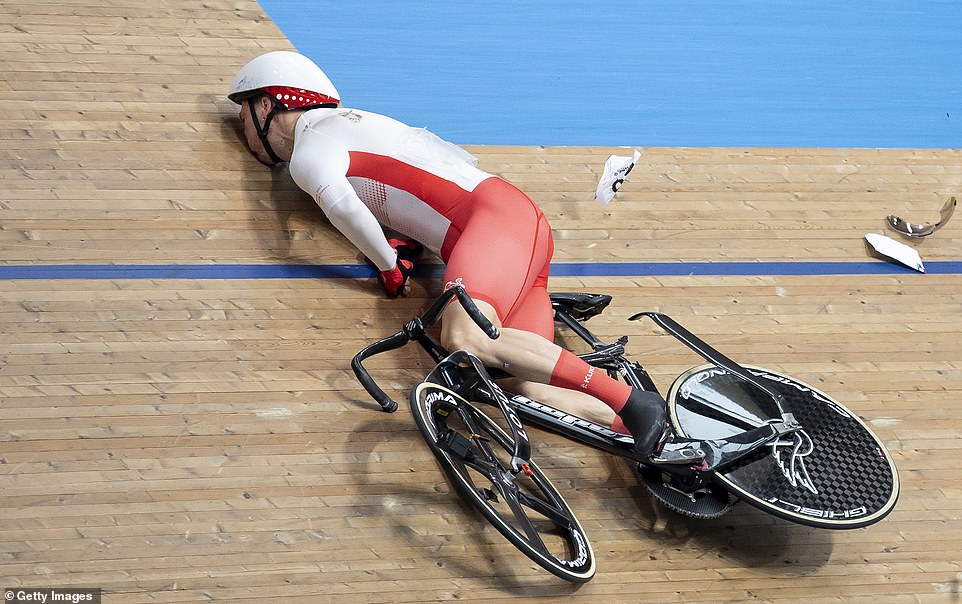 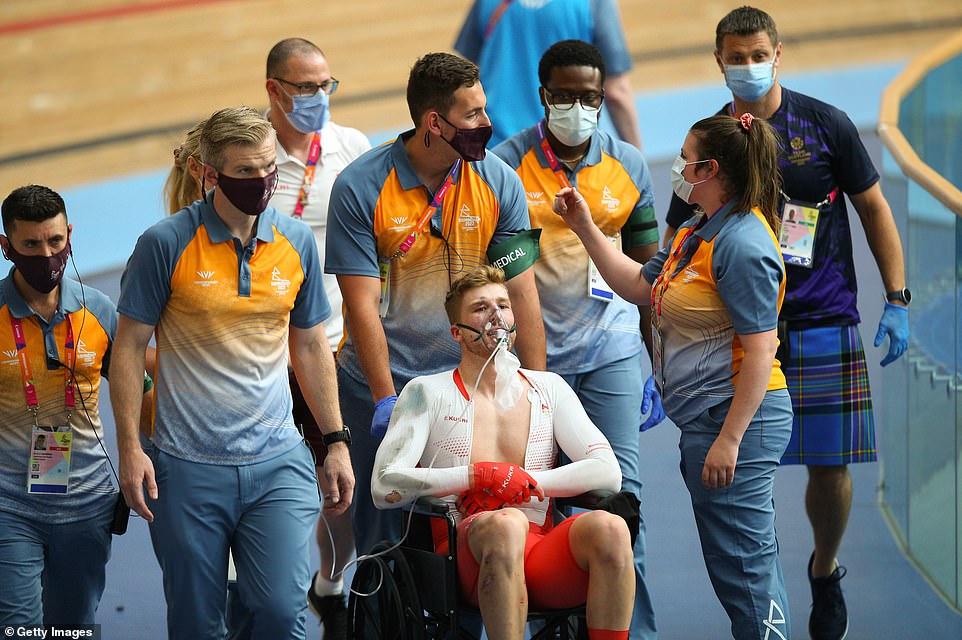 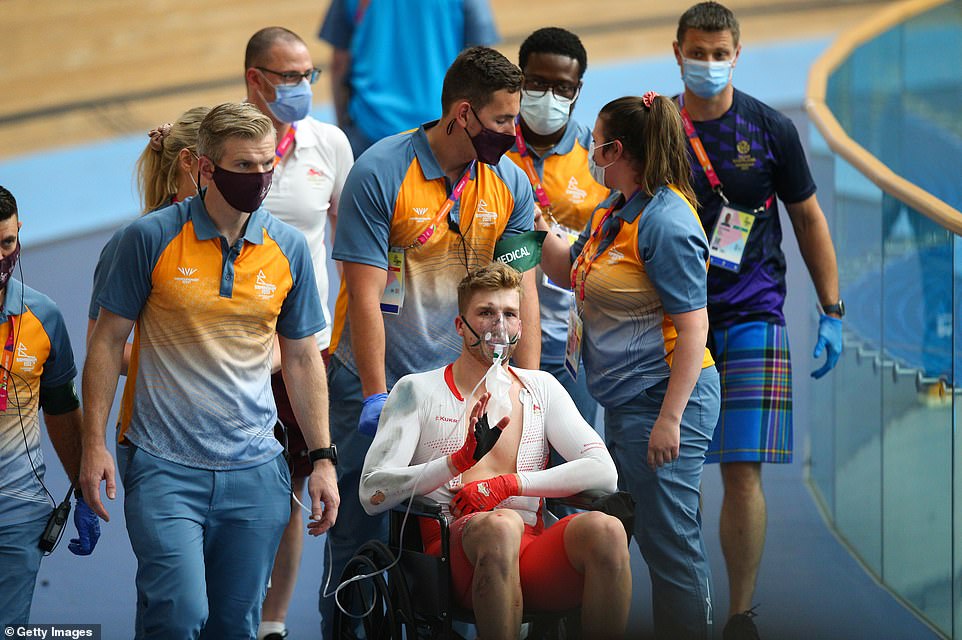 After receiving treatment for medics as he lay unconscious, a shaken Truman gestures to the applauding crowd as he is wheeled out of the velodrome and taken to hospital

The 25-year-old initially lay motionless on the infield of the velodrome as medical staff rushed to his aid.

Upon regaining consciousness, the stricken rider was helped away in a wheelchair receiving oxygen and transferred to hospital for treatment on his collarbone and head scans.

It is the just the latest setback for a rider who spent the last two years battling back problems, ruling him out of contention for the Tokyo Olympics.

Olympic cycling hero Sir Chris Hoy described the impact of the fall as ‘about as big as you can get in cycling’.

‘It reminds us how tough these guys are and how brave you have to be,’ he said.

‘Joe’s had many issues with injuries throughout his career, but he’s very strong-willed. I don’t know if I could have come back from the things that he’s come back from,’ Carlin continued in reference to Truman’s back injury which ruined his Tokyo Olympics campaign.

‘This is just another hiccup in the road for Joe… Hopefully it’s not too serious, he’ll be back on the bike again in a matter of weeks and he’s got a lot to aim for – (next year) we’ve the Nations Cup, the world championships in Glasgow and the Paris Olympics – he’s got time on his side and, knowing Joe, he will be back stronger than ever.’