‘I was genuinely afraid I would die’: 22-year-old college student details her harrowing battle with coronavirus, saying she ‘wouldn’t wish it upon my worst enemy’

A 22-year-old college student who was diagnosed with coronavirus has shared how bad the symptoms can really be, even for someone who is young and otherwise healthy — and she hopes her experience will encourage others to take the threat seriously.

Amy Shircel, a University of Wisconsin Madison student, first started experiencing mild fever, cough, and a headache on March 17, but when on to be hospitalized twice for severe vomiting, dehydration, fever, and other symptoms.

In a viral Twitter thread, Amy recounted how her symptoms progressed and worsened, warning 20-somethings not to think they’re invincible and admitting she wouldn’t wish the illness on her ‘worst enemy.’ 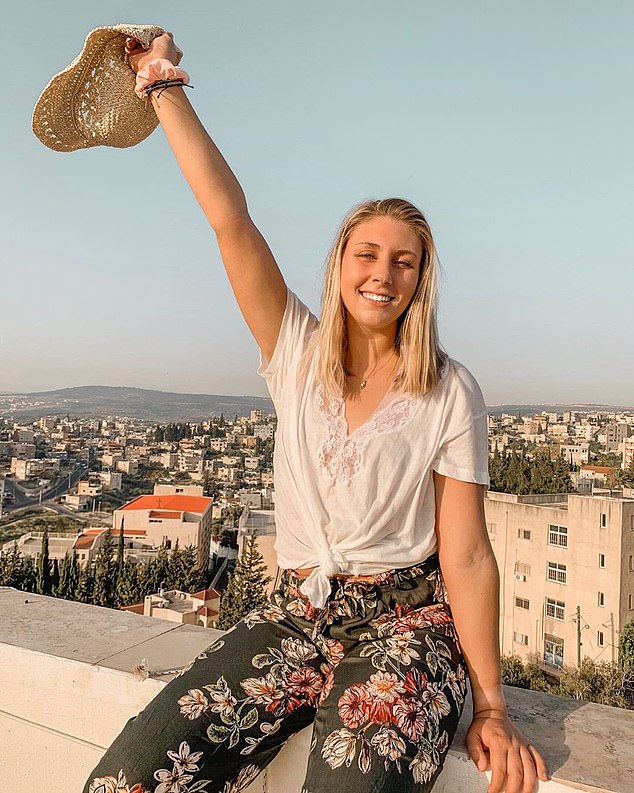 Behave, people! The 22-year-old hopes her experience will encourage others to take the threat seriously

‘I’m 22 and I tested positive for COVID-19. Take it from me – you do NOT want to catch this,’ she wrote. ‘Hopefully hearing about my experience will help the rest of you to stay home (for real).’

‘The first couple of days of symptoms were manageable. I had a fever, a mild cough, chills, headache, runny nose. Since I had been to Europe, they allowed me to get tested my second day of symptoms,’ she went on.

‘By the third day, I couldn’t keep anything down. I was vomiting constantly. I couldn’t sleep, I obviously couldn’t eat. At this point, I still didn’t have my test results back.

On the fourth day, she got back her positive test results, and her symptoms worsened.

‘I developed shortness of breath,’ she said. ‘It’s scary, it feels like your lungs are shallow and you can’t take a proper breath. I was weak, had a 102 degree fever and rising.’ 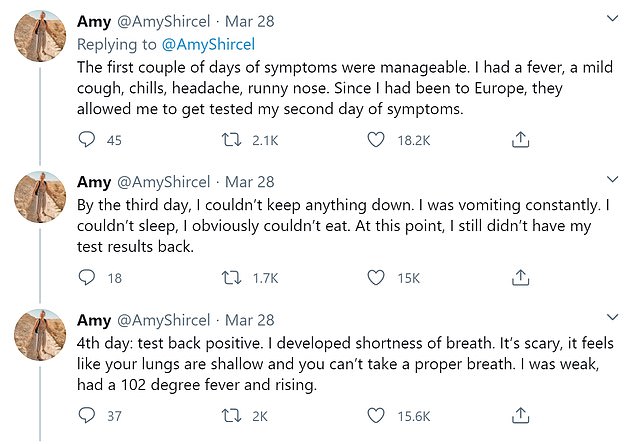 Yuck: Her symptoms started out mild but grew to include a high fever, fatigue, weakness, painful shortness of breath, and frequent vomiting, which lasted weeks

On the fifth day, she said, ‘Things got worse and worse. I had never been this ill in my entire life. I was genuinely afraid I would die, because that is what it felt like.

‘By the 6th day of symptoms, I was so weak I couldn’t even walk. I crawled to the bathroom to vomit,’ she said.

‘I became so dehydrated I called 911, and they took me in an ambulance to the emergency room. I stayed there for a day where they rehydrated me and got me some anti nausea meds.

‘7th-11th day of symptoms: ER again. I had never been that weak or fatigued by fever in my life. I either violently shivered in bed all day, or would wake up in a literal puddle of my own sweat. I couldn’t eat for 9 days. I was completely miserable.

By March 28, she was on her 12th day of symptoms — and they were just starting to get a little bit better. 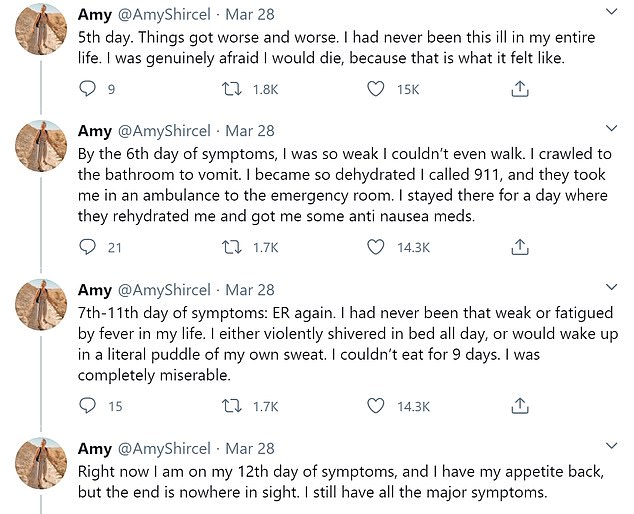 Scary: She was so dehydrated she had to be hospitalized twice — and admits she was afraid she would die

‘There’s really not a lot that health care workers can do for you. There’s no shot, there’s no pill that they can give you to feel better,’ she said

‘I have my appetite back, but the end is nowhere in sight. I still have all the major symptoms,’ she said.

‘A coronavirus diagnosis is dehumanizing and lonely, and I wouldn’t wish it upon my worst enemy,’ she concluded.

‘You aren’t invincible just because you’re in your 20s. Take it from me, and quarantine like your life depends on it (it might).’

Speaking to NBC 15, Amy shared more details about how terrifying the ordeal was.

‘I was genuinely afraid I would fall asleep and not wake up,’ she said. ‘I honestly did think I was going to die, and that’s how sick I was. It’s very scary, and to be alone during that made it a lot worse.’

Though she initially stayed away from her family, her symptoms grew so severe that she couldn’t take care of herself, and went to stay with her family. Her father took care of her, while her sister and mother stayed away. 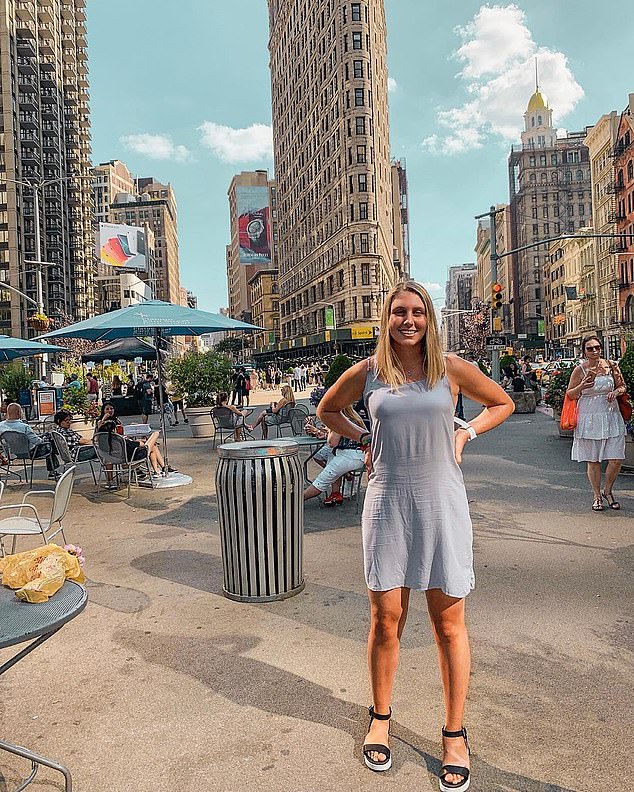 Stay home! She said that it was important for her to share her story so that other people — including her friends — really embrace safety measures like social distancing 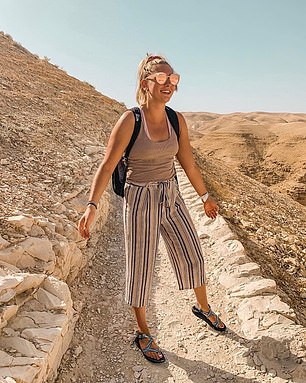 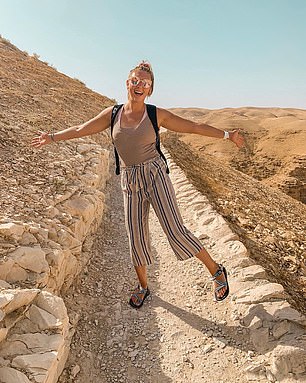 ‘It was really hard seeing my parents cry and be upset,’ Amy’s sister Cora said. ‘They didn’t know what they could do. They wanted to help, but they didn’t have that many options to help.’

Being so contagious to others certainly made Amy feel worse.

‘It’s really lonely and it’s dehumanizing when no one wants to come near you or touch you,’ she told The Daily Cardinal. ‘There’s really not a lot that health care workers can do for you. There’s no shot, there’s no pill that they can give you to feel better.’

She added that it was important for her to share her story so that other people — including her friends — really embrace safety measures like social distancing.