‘This is lunacy!’ Woke Manhattan DA Alvin Bragg is blasted for DEFENDING decision to free boy, 16, filmed ‘beating cop at Harlem subway station’ just two days after he was charged with mugging a stranger

Manhattan’s woke district attorney has been blasted for trying to defend the release of a suspected teenage mugger who was filmed beating an NYPD cop two days later.

Alvin Bragg’s office was blasted over its decision to free the 16 year-old, who hasn’t been named, over a mugging on Madison Avenue last Wednesday – only for the same suspect to allegedly punch a cop 20 times in a Harlem subway station three days later.

‘The DA clearly knew that they were prosecuting the same offender for a violent robbery,’ he told the news outlet. ‘If that is not an extraordinary circumstance, what is? If violence against police officers is unacceptable, why ignore the violent robbery arrest. This isn’t accountability. This is lunacy.’

Bederow spoke in response to Bragg spokesperson Emily Tuttle’s insistence that they’d made the right move with freeing the young offender – and letting him walk free again after the cop attack.

The youngster appeared in a Manhattan court Tuesday, and even asked if he could press charges of his own – but declined to say who he wished to prosecute.

‘Our system must respond to children as children and intensive community monitoring was the appropriate pre-trial determination for a fifteen-year-old child with no previous arrests,’ she said. 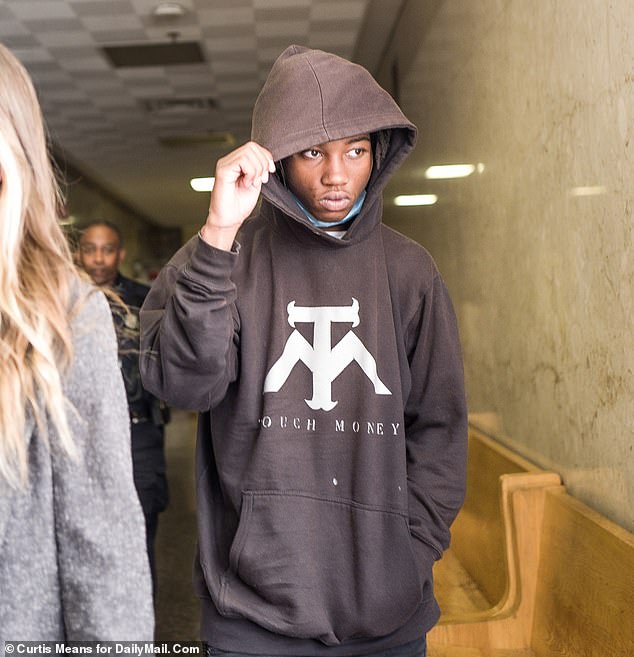 The 16-year-old, pictured here, after he was arraigned on second-degree assault charges on a police officer and the case was transferred to Family Court 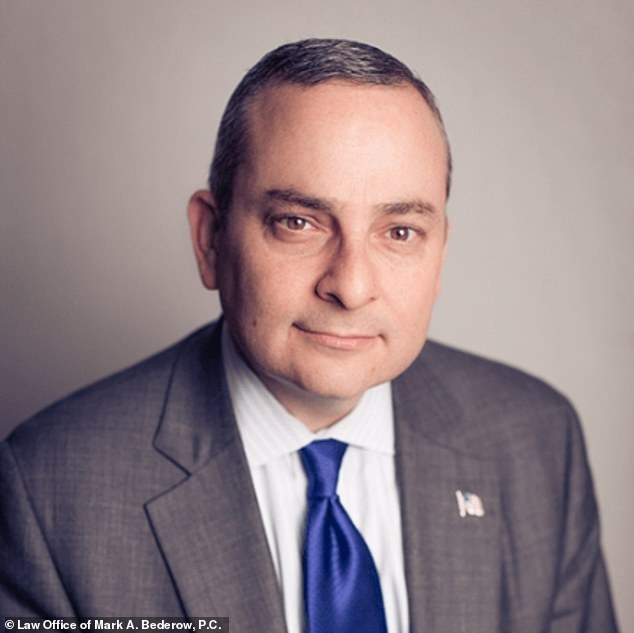 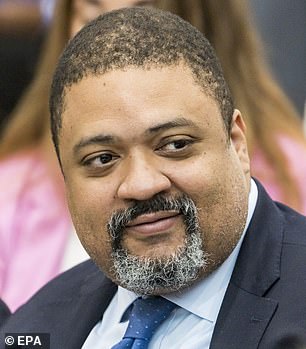 Woke Manhattan DA Alvin Bragg, pictured, has been blasted for attempting to defend his handling of the teenager’s case

‘Violence against our police officers is unacceptable and given his age at the time of arrest, we consented to send his second case to Family Court as soon as possible, where he would receive the age-appropriate interventions and supports he needs while being held accountable,’ Tuttle continued.

But her words cut little ice with other criminal justice figures.

Police Benevolent Association leader Patrick Lynch seemed to throw his hands up over what he called failure of the system.

‘We’re having this debate about what court it should go to, but the reality is that it doesn’t matter at this point — they’re releasing everyone. The criminal justice system is no longer set up to protect the public from dangerous criminals. It’s set up to fail.’

‘The politicians need to wake up and hold criminals accountable,’ Detectives Endowment Association president Paul DiGiacomo said. ‘They created an environment where there are no consequences for committing crime, what do they expect.

Mayor Eric Adams was also appalled by the boy’s repeated second chances, and said his treatment by the judicial system was an example of why New York City has become a ‘laughingstock’ in the eyes of the nation over its treatment of offenders.

They spoke days after the boy was caught on a wild video repeatedly punching a cop who attempted arrest him over the weekend for turnstile jumping.

The recording shows the the suspect bashing the cop in the head again and again and then throwing him into a chokehold temporarily before the patrolman is able to gain control. 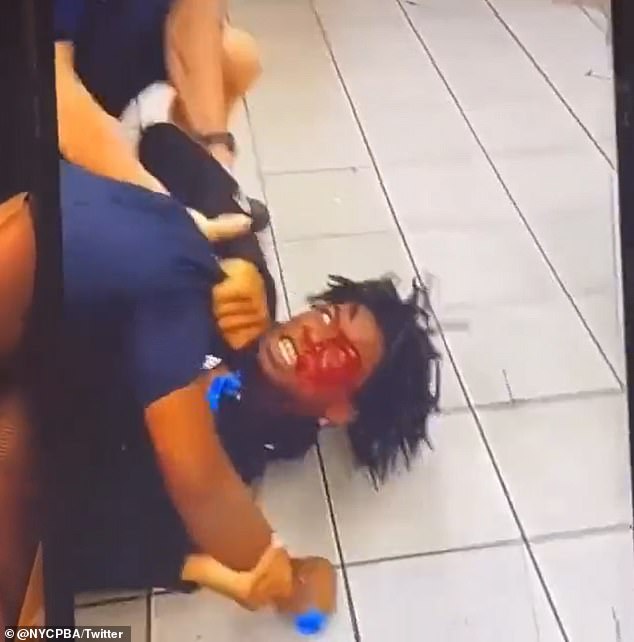 The teenager reportedly jumped over the turnstiles at the East Harlem subway station on Saturday before being approached by officers. He became ‘verbally aggressive’ before launching blows against an officer in the brawl 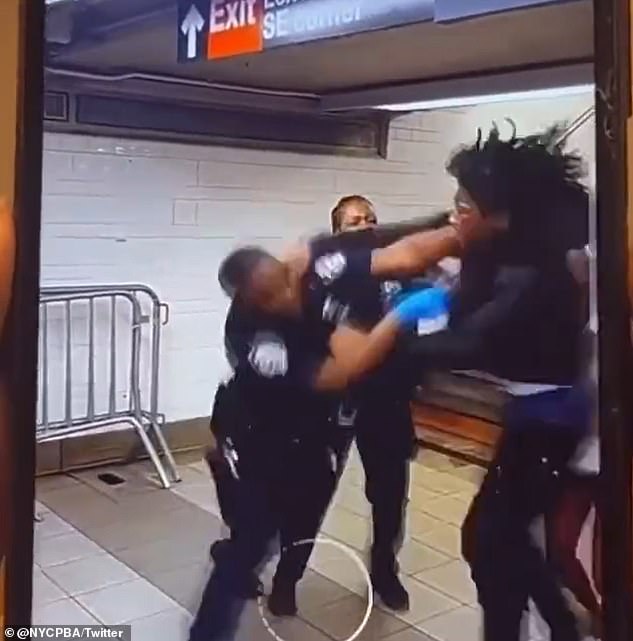 The 16-year-old started throwing multiple punches at officers, desperate to get away, before trying to slam one of the cops into the metal railings

In April, cops arrested the 16-year-old with a .40 caliber pistol and a crossbow in Brooklyn, but that case too was transferred to family court, according to Fox News.

Because it was a sealed juvenile case handled in a different jurisdiction, the Manhattan DA was not aware of the case.

And on July 20, days before he fight with the officer, he attacked and robbed a person on Madison Avenue, for which he was released without bail and given a curfew, according to a source.

At the teen’s arraignment for second-degree assault on the officer on Wednesday, Bragg’s office recommended that he be released without bail and the case be transferred to Family Court, where he will be tried as a juvenile. 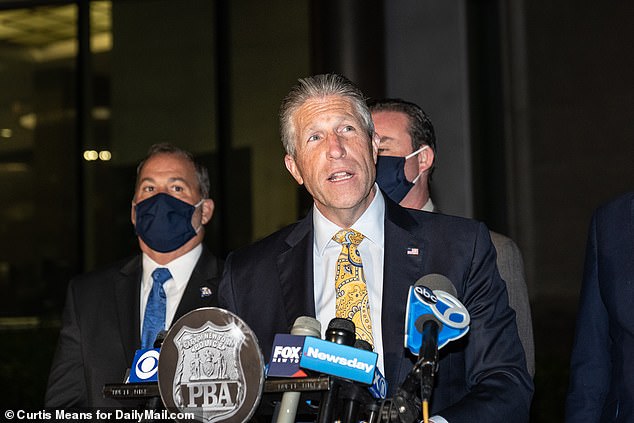 Patrick Lynch, President of the Police Benevolent Association of the City of New York, has slammed the lax bail systems in New York

New York District Attorneys can only prosecute youthful offenders under certain circumstances under the state Raise the Age Law.

The only exceptions to Family Court for teenage lawbreakers, ages 16 and 17, are sex crimes, use of a fire arm, serious physical injury or a case with ‘extraordinary circumstances.’

She had previously said that the young man did not have any weapons history because her office did not have access to his gun and crossbow charges, which was in a sealed juvenile case in Brooklyn. 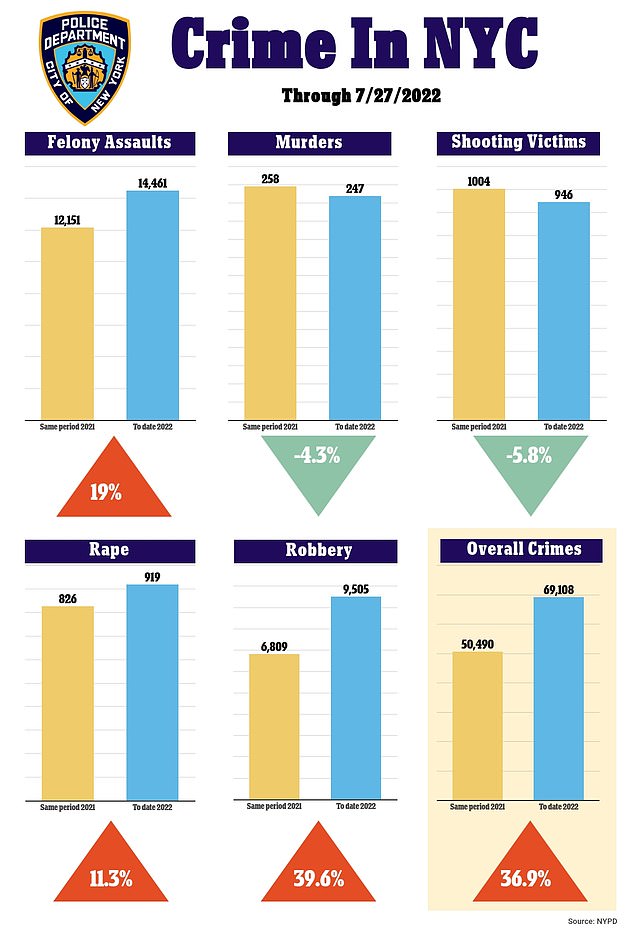 The teen’s violent brawl has stunned the city at a time of spiking crime.

Mayor Eric Adams, who has made curbing crime the cornerstone of his administration, called on state lawmakers to repeal the Raise the Age law.

‘It’s sad Mayor Adams has joined the ranks of right-wingers who are so grossly demagoguing this issue,’ Gianaris said. ‘He should focus less on deflecting from his own responsibility for higher crime and more on taking steps that would actually make New York safer.’