Kentucky begins to counts the human cost: Death toll rises to 25 – including six children – in wake of devastating flooding as rescue efforts continue and governor warns to expect more casualties

At least 25 people have died in the devastating Kentucky floods unleashed by torrential rainfall that swept through homes, washed out roads and pushed rivers over their banks, state authorities said, warning more fatalities are expected.

The death toll rose throughout Friday and dozens of people are still unaccounted for, according to officials.

Knott County Coroner Corey Watson confirmed on Friday 14 fatalities, up from 11 that morning, the New York Times reported. Perry County’s Emergency Management director, Jerry Stacy, said the county’s numbers rose from one to four victims by that evening. The coroner from Breathitt County, Hargis Epperson, said at least three in the county were confirmed dead, with at least a dozen missing.

More rainstorms are forecasted in coming days, as rescue crews continue the struggle to get into hard-hit areas of eastern Kentucky, some of them among the poorest places in America.

Police and National Guard troops, including personnel from neighboring states, used helicopters and boats to rescue dozens of people from homes and vehicles in Kentucky’s Appalachian coal-mining region. Video from local media showed floodwaters reaching the roofs of houses and turning roads into rivers.

The floods marked the second major national disaster to strike Kentucky in seven months, after a swarm of tornadoes claimed nearly 80 lives in the western part of the state in December. 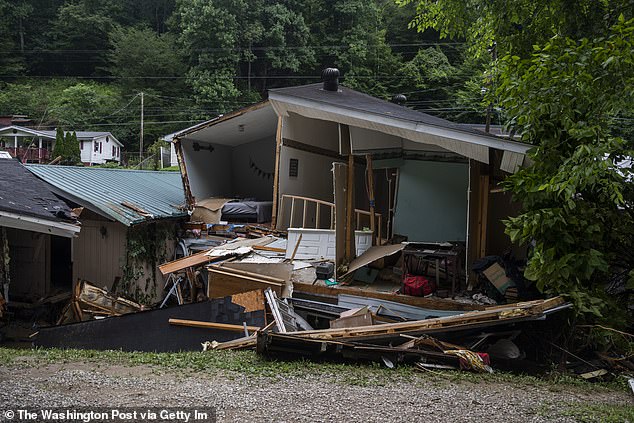 A home along KY-28 was moved off its foundation by the floodwaters in Chavies, Kentucky 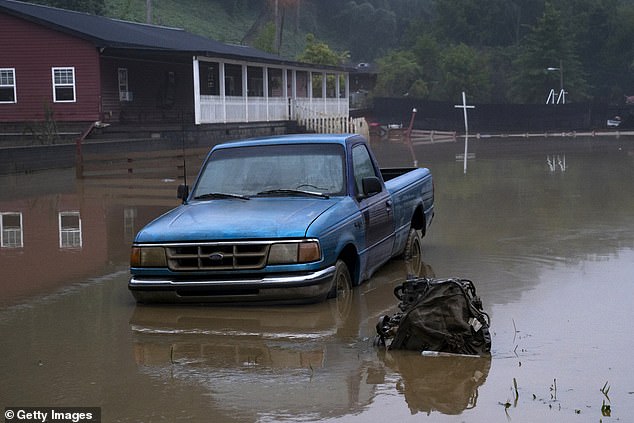 Receded water levels from the North Fork of the Kentucky River surround a truck in downtown Jackson on July 30. At least 25 people are confirmed dead and dozens more are missing 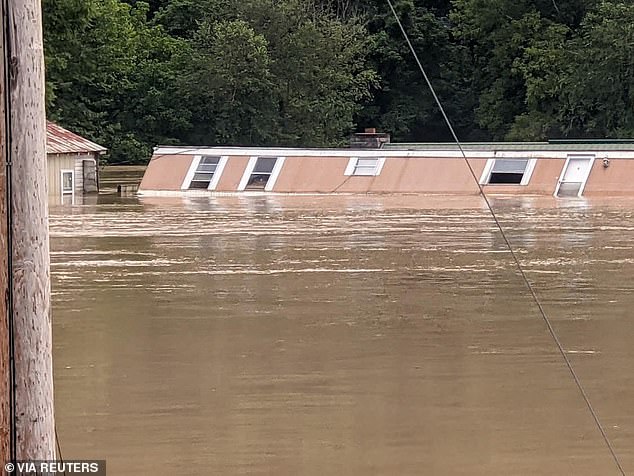 The death toll rose throughout Friday and dozens of people are still unaccounted for, according to the governor’s office and local officials

The rain let up early Friday after parts of eastern Kentucky received between 8 and 10 1/2 inches over 48 hours. But some waterways weren’t expected to crest until Saturday and Gov. Andy Beshear warned the death toll could rise further.

‘From everything we’ve seen, we may be updating the count of how many we lost for the next several weeks,’ Beshear said. ‘In some of these areas, it’s hard to know exactly how many people were there.’

It’s the latest in a string of catastrophic deluges that have hammered parts of the United States this summer, including St. Louis, Mo., earlier this week and again Friday. Scientists warn climate change is making weather disasters more common.

Water poured down hillsides and into Appalachian valleys and hollows where it swelled creeks and streams coursing through small towns. The torrent engulfed homes and businesses and trashed vehicles. Mudslides marooned some people on steep slopes.

Rescue teams backed by the National Guard used helicopters and boats to search for the missing. But some areas remained inaccessible and Kentucky Gov. Andy Beshear said the death toll was ‘going to get a lot higher.’ It could take weeks to account for all victims, he said.

Patricia Colombo, 63, of Hazard, Ky., got stranded after her car stalled in floodwaters on a state highway. Colombo began to panic when water started rushing in. Her phone was dead, but she saw a helicopter overhead and waved it down. The helicopter crew radioed a team on the ground that pulled her safely from her car.

Colombo stayed the night at her fiancee’s home in Jackson and they took turns sleeping, repeatedly checking the water with flashlights to see if it was rising. Colombo lost her car but said others who were struggling prior to the floods had it worse.

‘Many of these people cannot recover out here. They have homes that are half underwater, they’ve lost everything,’ she said.

The water came into Rachel Patton’s Floyd County home so quickly that her mother, who is on oxygen, had to be evacuated on a door floated across the high water. Patton’s voice faltered as she described their harrowing escape.

‘We had to swim out and it was cold. It was over my head so it was, it was scary,’ she told WCHS-TV.

An NBC News reporter tweeted a heartbreaking photo of a 98-year-old woman who sat in her flooded home with her knees drawn up to her chest as she waited to be rescued.

Mae Amburgey of Whitesburg, Kentucky is pictured partially submerged in the muddy water, her belongings floating around her. Amburgey’s granddaughter, Missy Crovetti, reports she was rescued and is safe. 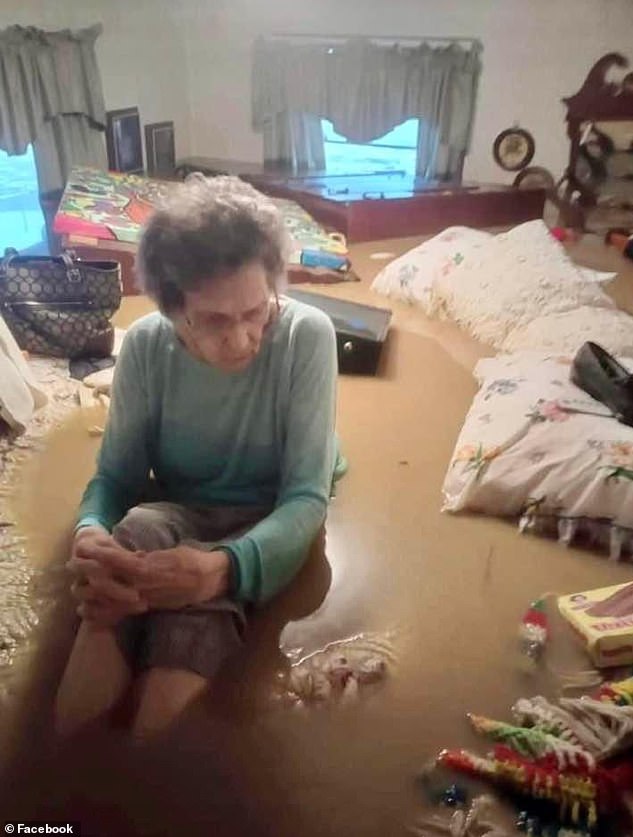 Mae Amburgey of Whitesburg, 98, waiting to be rescued Thursday after floodwater entered her home. Amburgey’s granddaughter, Missy Crovetti, reports she was rescued and is safe 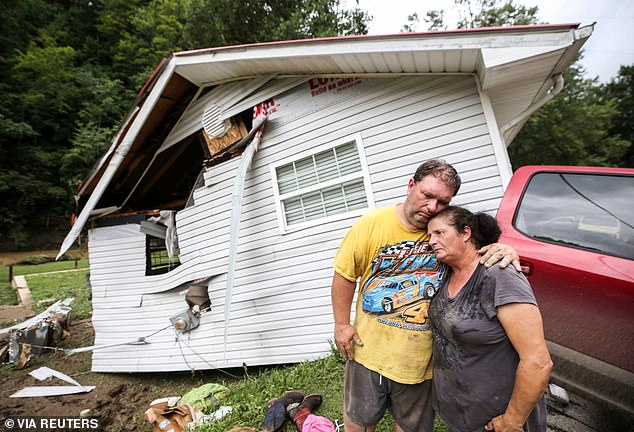 Reggie Ritchie comforts wife Della as they pause while clearing out their destroyed home destroyed by the flooding in Fisty, Kentucky on July 29

Beshear said Friday that at least six children were among the victims and that the total number of lives lost could more than double as rescue teams reach more areas. Among those who died were four children from the same family in Knott County, Coroner Corey Watson said Friday.

Four young siblings drowned in the floods after being swept from their mother’s arms.

Brittany Trejo said her four young cousins – who were aged eight, six, four, and one and a half – were killed in the catastrophic downpours that have obliterated entire towns and submerged houses and cars in deadly flood water as emergency services desperately scramble to save those who are trapped.

The bodies of all four children had been recovered from the Knott County community of Montgomery, Trejo, who is the cousin of the children’s mom, told Lexington Herald Leader. 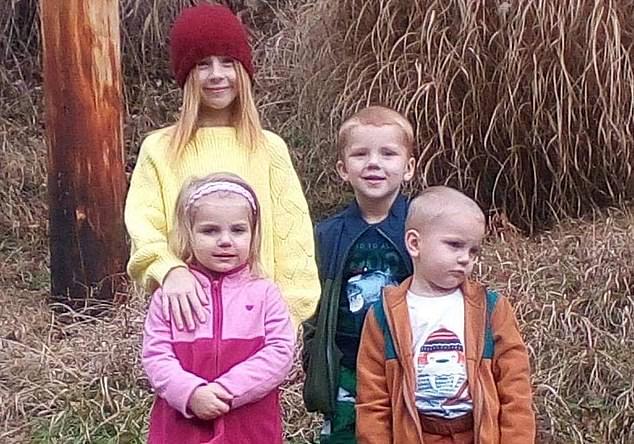 TRAGIC SIBLINGS: From left to right – Maddison Noble, eight, Nevaeh Noble, four, Riley Jr., six, and Chance Noble, one and a half, all drowned in the Kentucky floods, according to their mother’s cousin

The children’s parents, Amber Smith and Riley Noble, live in Montgomery, and their home began filling with water on Thursday before the family of six were washed off of their roof with a big tide.

They were holding onto a tree for hours – before another tide washed them all away and the parents lost sight of their children.

Little Riley Jr., six, and Nevaeh Noble, four, were found dead Thursday; the bodies of Maddison Noble, eight, and Chance Noble, one and a half, were found Friday morning, Trejo said. 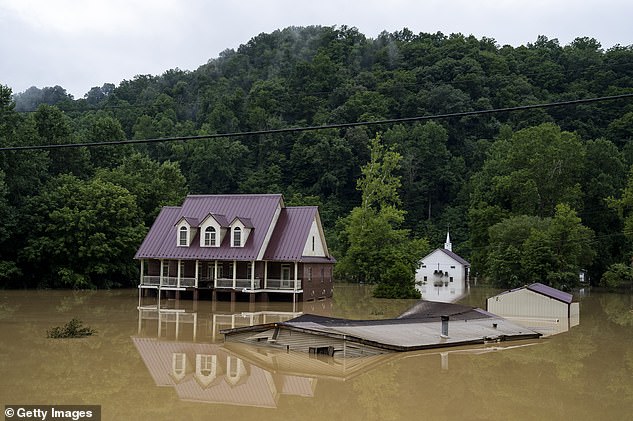 KENTUCKY: A house is seen almost completely submerged off of the Bert T Combs Mountain Parkway on July 29 in Breathitt County, Kentucky. At least 19 people have been killed and hundreds had to be rescued amid flooding from heavy rainfall 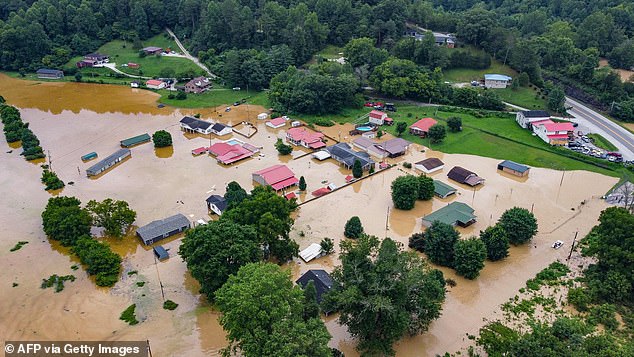 DEADLY FLOODS: A shocking aerial view of homes submerged under flood waters from the North Fork of the Kentucky River in Jackson, Kentucky, on July 28. The Governor has warned that the death toll is expected to double and include children

At least 33,000 utility customers were without power. The flooding extended into western Virginia and southern West Virginia, across a region where poverty is endemic.

‘There are hundreds of families that have lost everything,’ Beshear said. ‘And many of these families didn’t have much to begin with. And so it hurts even more. But we’re going to be there for them.’

Extreme rain events have become more common as climate change bakes the planet and alters weather patterns, according to scientists.

That’s a growing challenge for officials during disasters, because models used to predict storm impacts are in part based on past events and can’t keep up with increasingly devastating flash floods, hurricanes and heat waves. 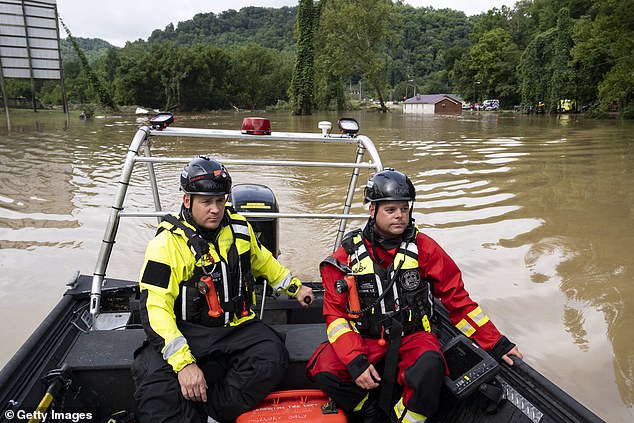 KENTUCKY: Lexington Firefighters Jeremey Miller and Captain Scott Butler warm up the engine before heading up Troublesome Creek to rescue people that have been stranded since Wednesday night in Lost Creek, Ky. 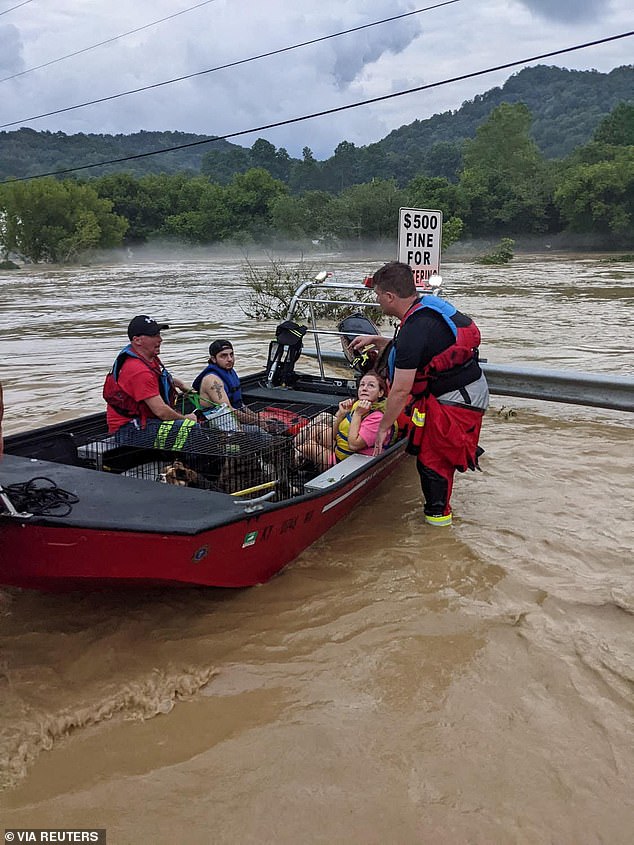 A rescue team evacuate residents from their homes in a boat through flooded streets, in Breathitt County, Ky.

‘This is what climate change looks like,’ meteorologist and Weather Underground founder Jeff Masters said of flooding in Appalachia and the Midwest. ‘These extreme rainfall events are the type you would expect to see in a warming world.’

A day before the floods hit Appalachia, the National Weather Service had said Wednesday that there was a ‘slight to moderate risk of flash flooding’ across the region on Thursday.

The floodwaters raging through Appalachia were so swift that some people trapped in their homes couldn’t be immediately reached, said Floyd County Judge-Executive Robbie Williams.

Just to the west in hard-hit Perry County, authorities said some people remained unaccounted for and almost everyone in the area had suffered some sort of damage.

‘We’ve still got a lot of searching to do,’ said Jerry Stacy, the emergency management director in Perry County.

More than 330 people have sought shelter, Beshear said. And with property damage so extensive, the governor opened an online portal for donations to the victims. 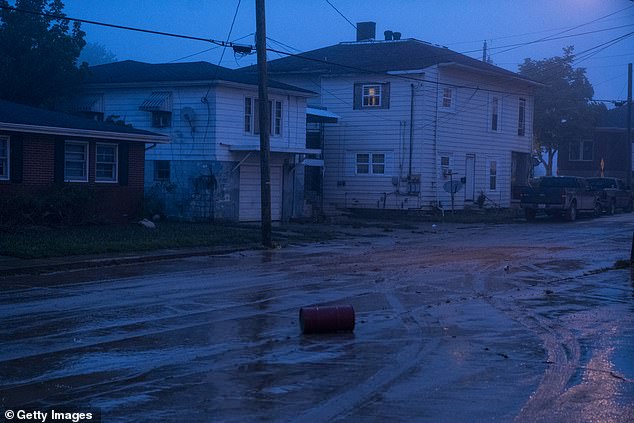 A view of a wet downtown Jackson on July 30, 2022 in Jackson, Ky. At least 20 people have been killed and hundreds had to be rescued amid flooding from heavy rainfall

President Joe Biden called to express his support for what will be a lengthy recovery effort, Beshear said, predicting it will take more than a year to fully rebuild.

Biden also declared a federal disaster to direct relief money to more than a dozen Kentucky counties, and the Federal Emergency Management Agency appointed an officer to coordinate the recovery. FEMA Administrator Deanne Criswell said at a briefing with Beshear that the agency would bring whatever resources were necessary to support search and recovery efforts.

Even the governor had problems reaching the devastation. His initial plans to tour the disaster area were postponed Friday because of unsafe conditions at an airport where he was to land. He got a look at the flooding later in the day aboard a helicopter.

‘Hundreds of homes, the ballfields, the parks, businesses under more water than I think any of us have ever seen in that area,’ the governor said. ‘Absolutely impassable in numerous spots. Just devastating.’

Portions of at least 28 state roads in Kentucky were blocked due to flooding or mudslides, Beshear said. Rescue crews in Virginia and West Virginia worked to reach people where roads weren’t passable.

Gov. Jim Justice declared a state of emergency for six counties in West Virginia where the flooding downed trees, power outages and blocked roads. Gov. Glenn Youngkin also made an emergency declaration, enabling Virginia to mobilize resources across the flooded southwest of the state.

The National Weather Service said another storm front adding misery to flood victims in St. Louis on Friday could bring more thunderstorms to the Appalachians in coming days.