A 5-year-old has died in Detroit after a Glock pistol that an 18-month-old managed to get a hold of and was playing with accidentally discharged, striking the child in the neck, police say.

The shooting happened Wednesday morning, and the child’s father has been detained for further questioning, according to investigators. As of Thursday, no charges have been filed.

“It’s a sad day in the city today,” Detroit Police Commander Tiffany Stewart told reporters. “Another child died in the city of Detroit because of lack of firearm safety.” 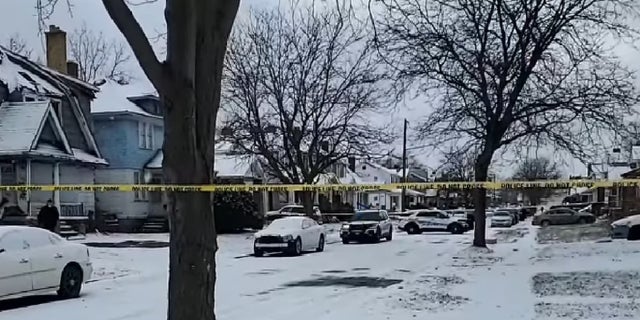 The neighborhood where the shooting happened Wednesday. (Detroit Police Department)

PHILADELPHIA GIRL, 9, DIES AFTER BEING SHOT

Stewart said police first received a 911 call from inside the home where the incident occurred, in which a person told a dispatcher that one child shot another.

“It was reported at the time that an 18-month-old got a hold of a gun inside of the home, started playing with it and accidentally shot the 5-year-old,” she said.

When officers arrived, they got medical attention for the 5-year-old who was shot, but the child later died from his injuries at a local hospital, according to Stewart.

Police have recovered the Glock pistol involved in the shooting. A grandmother and 1-year-old also inside the home were not injured.

“This was avoidable,” Stewart said. “This is why we emphasize gun safety… with gun locks and lock boxes so that we don’t have circumstances like this.”