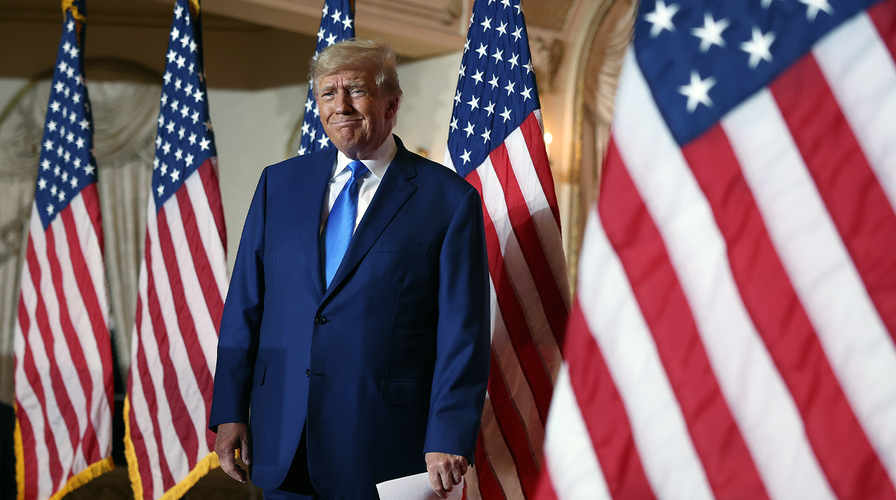 PALM BEACH, Fla. – Former President Donald Trump announced that he is running for the 2024 Republican nomination for president, seeking to stage a dramatic return to the White House after having lost his bid for re-election to Joe Biden in 2020.

Trump, a Republican and the leader of the “Make America Great Again” movement, announced his third presidential bid on Tuesday during a speech at his Mar-a-Lago, Florida, home after having teased a bid since leaving office in 2021.

“In order to make America great and glorious again. I am tonight announcing my candidacy for president of the United States,” Trump said Tuesday evening to a crowd of supporters.

“But just as I promised in 2016, I am your voice. I am your voice. The Washington establishment wants to silence us, but we will not let them do that. What we have built together over the past six years is the greatest movement in history because it is not about politics. It’s about our love for this great country, America, and we’re not going to let it fail,” said Trump.

“I am running because I believe the world has not yet seen the true glory of what this nation can be. We have not reached that pinnacle, believe it or not,” he continued, blaming President Biden for the current state of the nation. “In fact, we can go very far. We’re going to have to go far first. We have to get out of this ditch. And once we’re out, you’ll see things that nobody imagined for any country. It’s called the United States of America. And it’s an incredible place.” 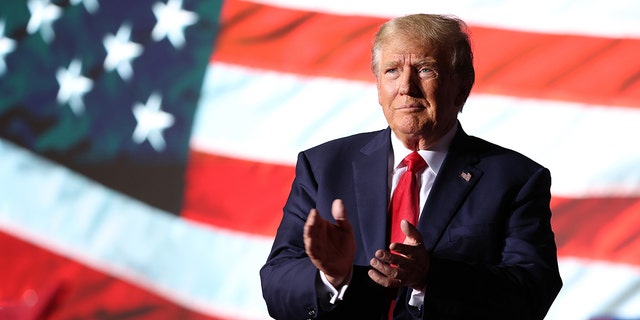 Trump first won the presidency in 2016 against former Secretary of State Hillary Clinton. If he is elected again, he would become only the second president to retake the White House after having been ousted, a feat achieved by Grover Cleveland in 1892 after he had lost the presidency to Benjamin Harrison in 1888. A victory would make Trump the 45th and the 47th president.

Since his loss, Trump has challenged the legitimacy of the 2020 election results, repeatedly claiming the race was “rigged,” due to the COVID pandemic-era process of mail-in ballots. Trump falsely claimed the election was stolen, and his legal team filed a slew of lawsuits in battleground states across the nation.

Trump’s announcement comes one week after the 2022 midterm elections in which Republicans did not obtain an anticipated “red wave” of victories. Democrats kept control of the Senate and if Republicans are able to capture a majority in the House, it is expected to be slight. The former president was heavily involved in the midterms, throwing his support behind Republican candidates across the nation. During the primaries, the majority of Trump-endorsed candidates were victorious, becoming the GOP nominee in their races.

The economy, which has been a top issue for voters during the 2022 midterm election cycle amid record-high inflation, was strong under Trump’s presidency—with an increase in middle-class family income, the lowest unemployment rate in half a century and unprecedented job growth.

Trump also worked to cut red tape and reduce regulations facing American businesses and workers, working to put in place policies to bring back supply chains from overseas, in line with his “Make America Great Again” and “America First” messaging.

As for trade relations, Trump immediately withdrew from the Trans-Pacific Partnership and ended the North American Free Trade Agreement (NAFTA) in January 2017, replacing it with the existing United States-Mexico-Canada Agreement (USMCA), which included new protections for American manufacturers and workers.

IF TRUMP ENDORSED GOP NOMINEES LOSE IN NOVEMBER, DOES THE FORMER PRESIDENT TAKE A 2024 HIT?

Another issue for Americans during the midterm election cycle has been energy and record-high gas prices. 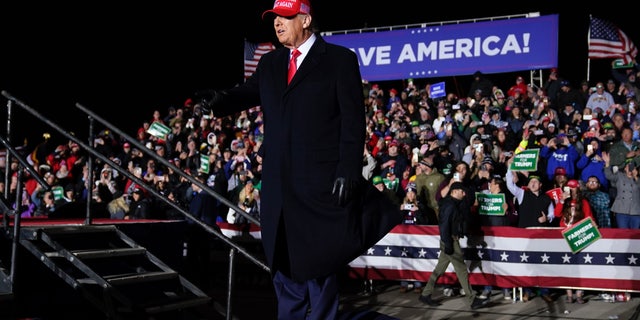 Under the Trump administration, Trump ensured that the U.S. was the number one producer of oil and natural gas in the world, but President Biden reversed some of those policies and refocused on clean energy.

Meanwhile, the Trump administration’s foreign policy message was one that focused on “peace through strength.”

Trump withdrew from the Iran Nuclear Deal—which the Biden administration began taking steps to re-enter when he took office in 2021.

TRUMP DROPS NEW HINTS ON POSSIBLE 2024 PRESIDENTIAL RUN: ‘WE WERE SO CLOSE’

Regarding the Middle East, the Trump administration brokered the Abraham accords, a “historic peace agreement” between Israel and the United Arab Emirates that normalized relations and created bilateral agreements regarding “investment, tourism, direct flights, security, telecommunications, technology, energy, health care, culture, the environment, the establishment of reciprocal embassies, and other areas of mutual benefit.”

In 2018, the Trump administration moved the U.S. embassy from Tel Aviv to Jerusalem – a relocation long debated in Washington – and one that showed the U.S. officially recognizing Jerusalem as the capital of Israel. 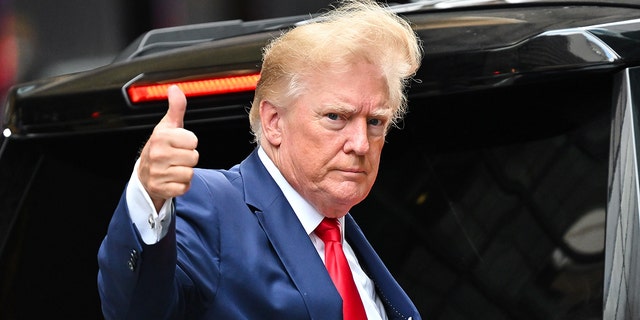 A law-and-order president, Trump delivered support for law enforcement and put a major focus on protecting and securing the U.S.-Mexico southern border.

Trump’s presidency, from 2017 to 2021, was clouded by investigations—several into whether he colluded with Russia to influence the 2016 election, some focused on his finances and others that led to impeachment, making him the first president in United States history to have been impeached twice.

Trump’s post-presidential life has been reminiscent of his days in the Oval Office, marred by probes, which the former president and his allies said were just part of an effort by his political opponents to prevent him from running for re-election in 2024.

The former president is currently under federal investigation by the Justice Department for allegedly mishandling classified documents under the Presidential Records Act. A federal judge appointed Judge Raymond Dearie to serve as special master and review the thousands of records seized by the FBI. Trump and his legal team have argued that none of the documents taken from his Mar-a-Lago home were classified.

TRUMP ‘LOVES THE IDEA OF TESTIFYING’ BEFORE JAN. 6 COMMITTEE: SOURCE CLOSE TO THE FORMER PRESIDENT

The FBI conducted an unprecedented pre-dawn raid of his private residence at Mar-a-Lago in August, alleging that the former president had classified national security information.

The investigation comes amid a criminal investigation into Trump and his family’s business practices by New York Attorney General Letitia James.

Also this summer, a federal appeals court paved the way for the House Ways and Means Committee to finally obtain Trump’s tax returns from the Internal Revenue Service—something the panel has been trying to obtain since 2019, under a law that permits the disclosure of an individual’s tax returns to the congressional committee.

Trump may seek emergency intervention measures from the Supreme Court in an attempt to temporarily block any release of these tax records—which likely will come under renewed scrutiny now that he decided to run for a third time.

When Trump first took office in January 2017, the FBI was in the middle of conducting a counterintelligence investigation into whether candidate Donald Trump and members of his campaign were colluding or coordinating with Russia to influence the 2016 election. That investigation was referred to inside the bureau as “Crossfire Hurricane,” and began on July 31, 2016.

That investigation was opened, despite then-CIA Director John Brennan briefing then-President Obama on July 28, 2016 about a purported proposal from one of Hillary Clinton’s campaign foreign policy advisers “to vilify Donald Trump by stirring up a scandal claiming interference by the Russian security service.”

Special Counsel Robert Mueller ultimately was appointed to take over the investigation, but, after nearly two years, Mueller’s investigation, which concluded in March 2019, yielded no evidence of criminal conspiracy or coordination between the Trump campaign and Russian officials during the 2016 presidential election. 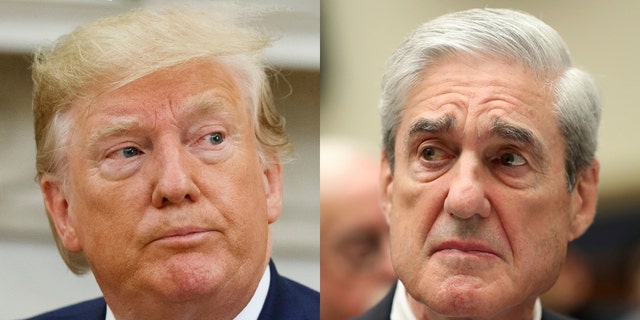 Mueller’s investigation yielded no evidence of criminal conspiracy or coordination between the Trump campaign and Russian officials during the 2016 presidential election.

Weeks after Mueller’s probe was complete, Trump had a phone call with Ukrainian President Volodymyr Zelenskyy during which he pressed Zelenskyy to launch investigations into the Biden family’s actions and business dealings in Ukraine—specifically Hunter Biden’s ventures with Ukrainian natural gas firm Burisma Holdings. Hunter Biden, at the time, was, and still is, under federal criminal investigation for his tax affairs, prompted by suspicious foreign transactions.

The president’s request came after millions in U.S. military aid to Ukraine had been frozen, which Democrats and some witnesses have cited as a quid pro quo arrangement. Democrats also claimed Trump was meddling in the next presidential election by asking a foreign leader to look into a Democratic political opponent.

Trump’s conversation with Zelenskyy prompted a whistleblower complaint, which led to the House impeachment inquiry, and ultimately, impeachment proceedings in the Senate.

The House voted to impeach Trump in December 2019 on two counts— abuse of power and obstruction of Congress. The Senate voted for acquittal in February 2020.

Meanwhile, on Jan. 6, 2021, pro-Trump rioters breached the U.S. Capitol during a joint session of Congress to certify the Electoral College results in favor of President Biden. Trump was permanently banned from Facebook, Twitter, Instagram, Snapchat and YouTube after the riot.

The House of Representatives then drafted articles of impeachment against him again, and ultimately voted to impeach him on a charge of inciting an insurrection for the Jan. 6 Capitol riot—making him the first and only president to be impeached, and ultimately acquitted, twice in history.

Trump’s legal team denounced the proceedings as an unconstitutional “sham impeachment” against a private citizen, driven by Democrats’ “hatred” for Trump and desire to silence a political opponent.

The Senate voted to acquit, but had Trump been convicted, the Senate would have moved to bar the 45th president from holding federal office ever again, preventing a 2024 White House run.