Bleached male! Shirtless Elon Musk, 51, sips on a drink and gets some Mykonos sun on his bod during yacht trip with Hollywood super-agent Ari Emanuel and his fashion designer wife Sarah Staudinger

He recently revealed he’s fathered 10 children by three different women and is embroiled in a lawsuit with Twitter after backing out of a $44 billion takeover of the social media platform.

But Elon Musk isn’t letting any of that stop him from enjoying a luxury vacation in Greece with pals.

The SpaceX and Tesla founder, 51, was seen soaking up the sun and enjoying drinks on a yacht off the coast of the island of Mykonos on Monday.

He was joined by fashion designer Sarah Staudinger, 33, founder of the Staud fashion brand, and her new husband, superstar agent – and inspiration for HBO’s Entourage – Ari Emanuel, 61.

Fun in the sun: Elon Musk, 51, is enjoying vacation on board a yacht off the Greek island of Mykonos and was spotted Monday soaking up the sun while cruising the Mediterranean

Looking like he hasn’t a care in the world, Musk made a splash in a pair of black swim trunks.

Not seen with the group was Australian actress Natasha Bassett, 27, the latest beauty to be romantically linked to the billionaire.

The pair were seen dining together in St. Tropez in the South of France in May and were among the guests at Ari and Sarah’s wedding officiated by Larry David.

‘Elon and Natasha have been in an on-again, off-again relationship for a few years,’ an insider told Australia’s Daily Telegraph Confidential.

‘I think their relationship is quite tumultuous, especially with him having the same sort of on-again, off-again type of relationship with Grimes.’

Their daughter Exa Dark Sideræl was born via a surrogate in December and they share a son X Æ A-Xii (pronounced ‘X-Ash-A-12’) who is now two. The kids are known as X and Y for short.

Beach ready: The billionaire donned black swim shorts for the afternoon and had a happy time jumping in and out of the crystal blue water 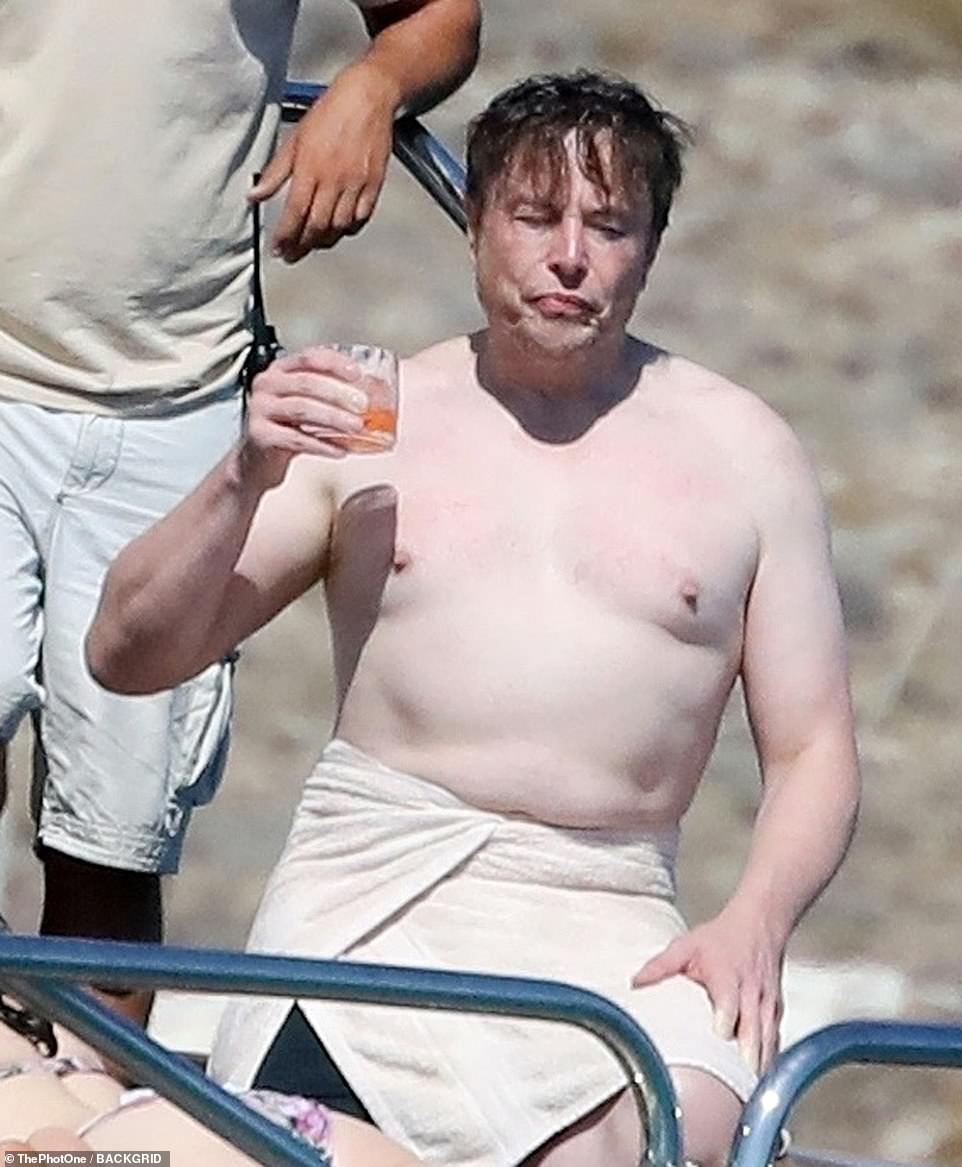 Holiday mode: Later Elon enjoyed a drink as he made the most of some downtime from his many business ventures 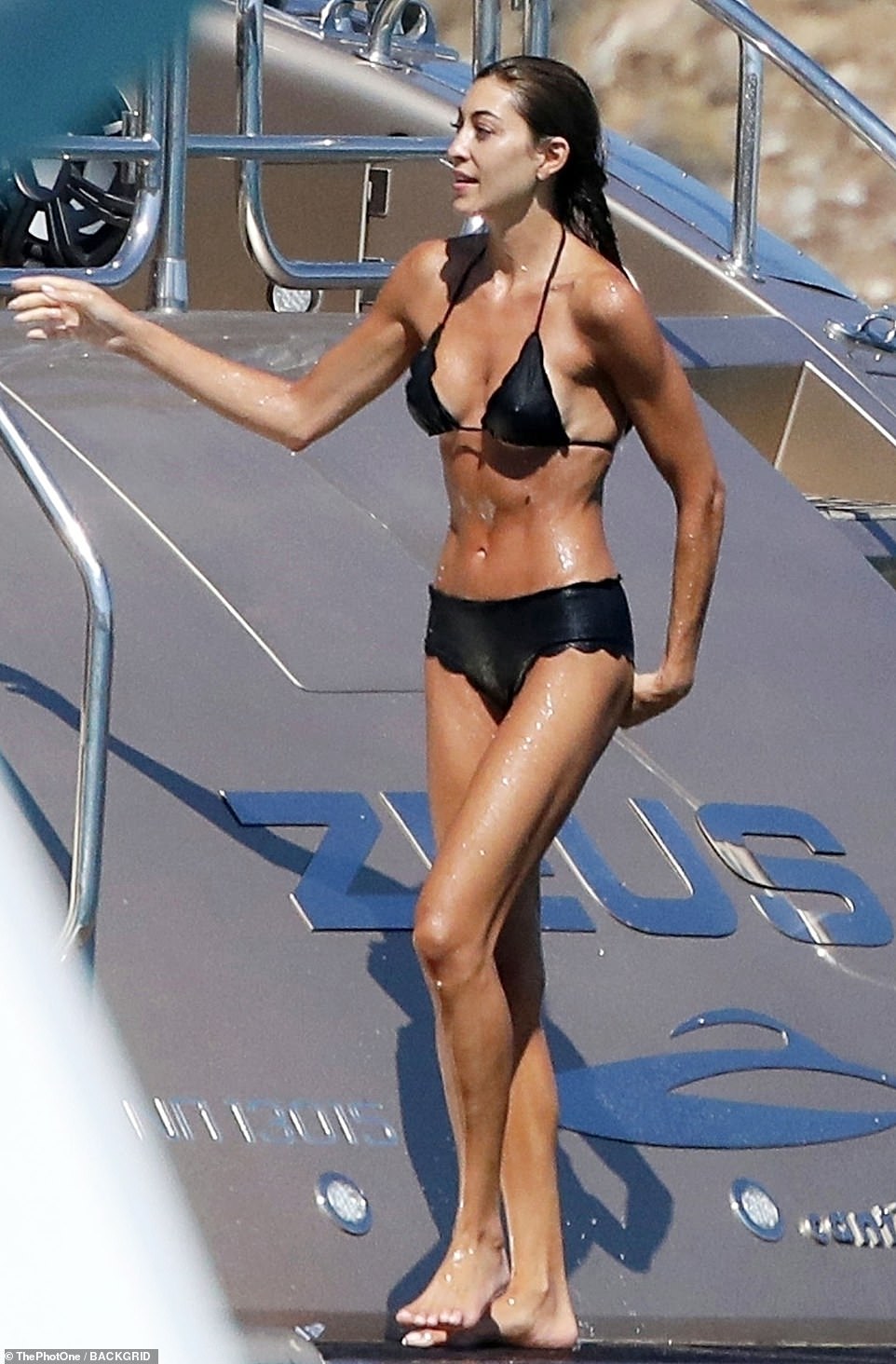 Gorgeous: Elon was joined on the trip by American fashion designer Sarah who looked gorgeous in a black bikini 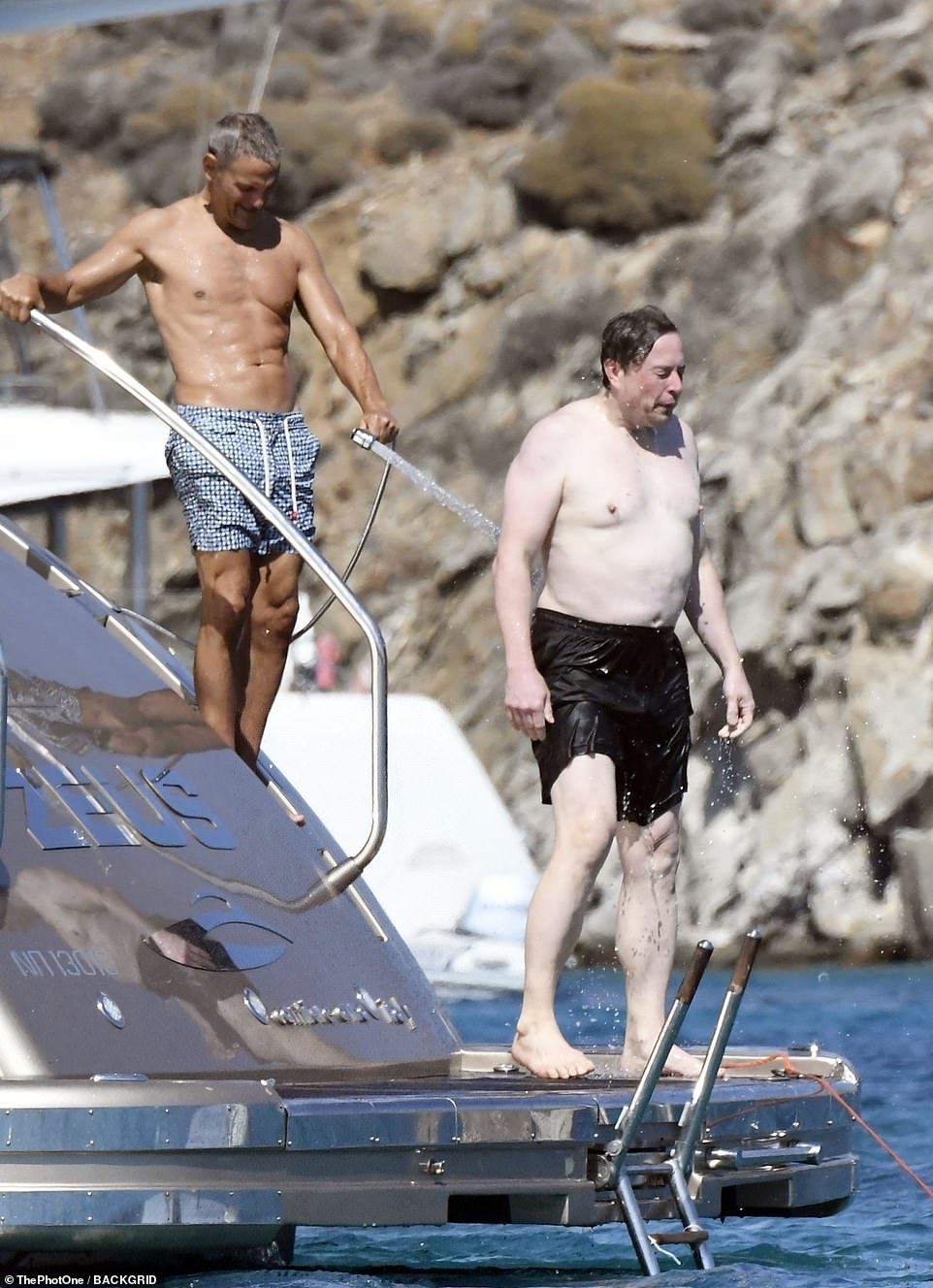 Pals: Superstar agent and pal Ari Emanuel (left) soaked Elon with water before he took a dip in the sea

It recently emerged that Musk had welcomed twins last November with a senior executive at one of his companies, Shivon Zilis, 3.

A sixth child, their first, died of sudden infant death syndrome aged ten weeks in 2002, prompting them to use in vitro fertilisation. Then Justine gave birth to twins — Vivian and Griffin — in 2004, followed by triplets — Kai, Saxon and Damian — in 2006.

Earlier this month, he tweeted: ‘Doing my best to help the underpopulation crisis,’ he intoned. ‘A collapsing birth rate is the biggest danger civilisation faces by far.’

He added: ‘I hope you have big families and congrats to those who already do!’ 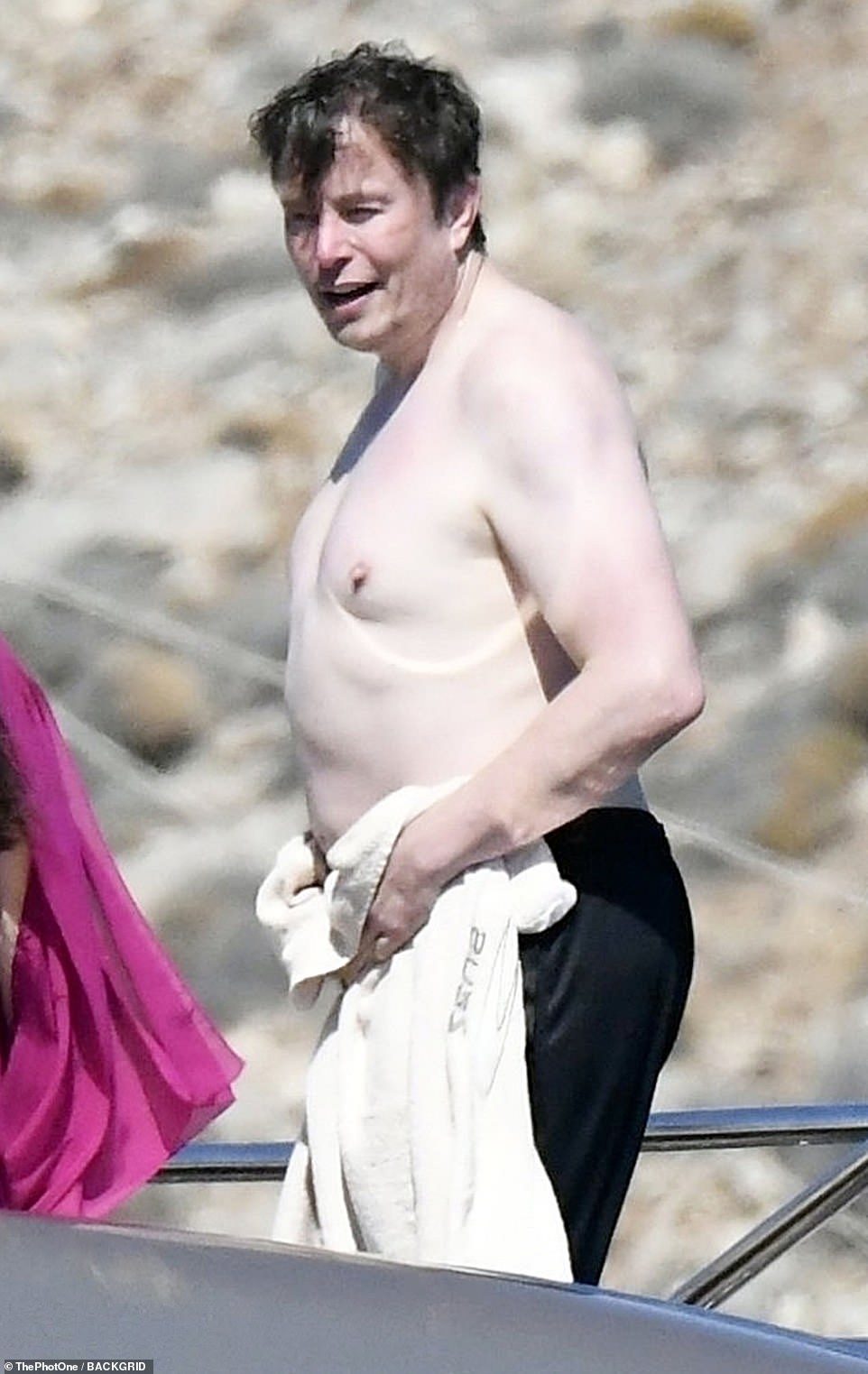 Drying off: The businessman enjoyed the water before climbing on board and drying off with a a large fluffy towel 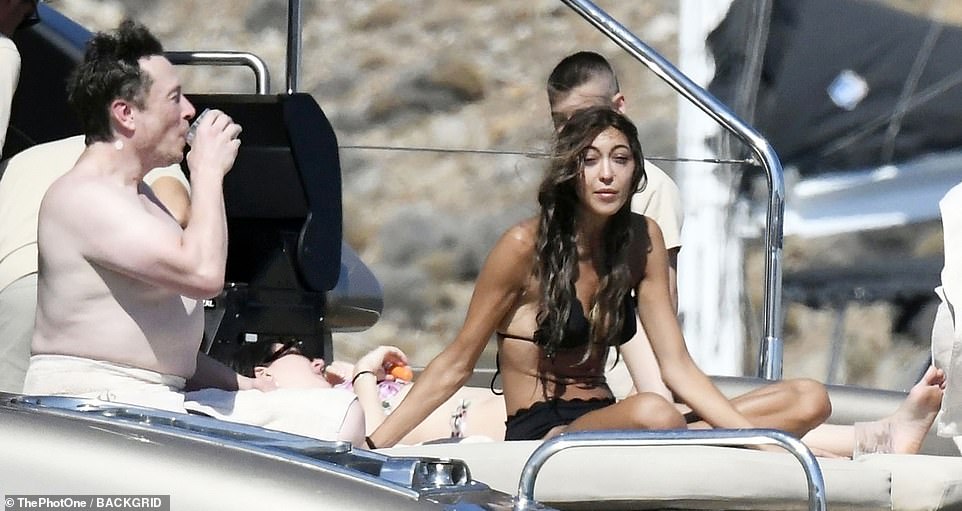 Chat: Meanwhile Sarah looked ravishing the skimpy black two piece as she too made the most of the fantastic weather 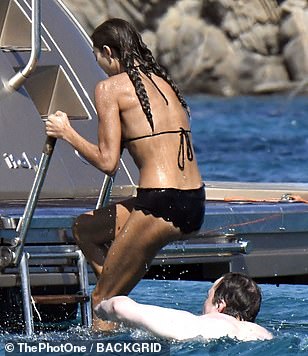 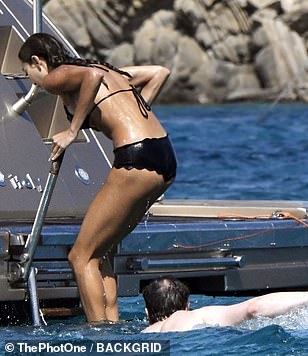 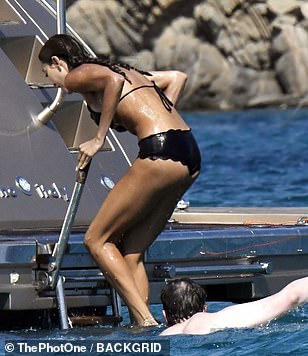 Mermaid: Sarah, founder of the Staud fashion brand, showcased her impressive diving skills as she joined the tech billionaire in the ocean 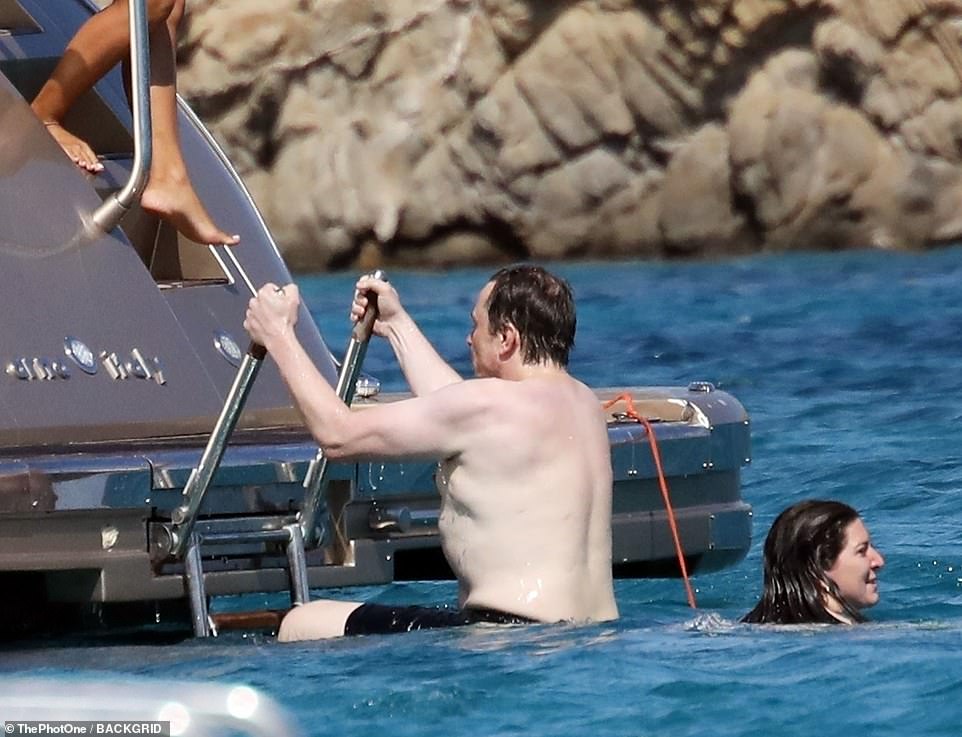 Pulling up the rear: Elon followed the brunette beauty up the ladder onto the boat 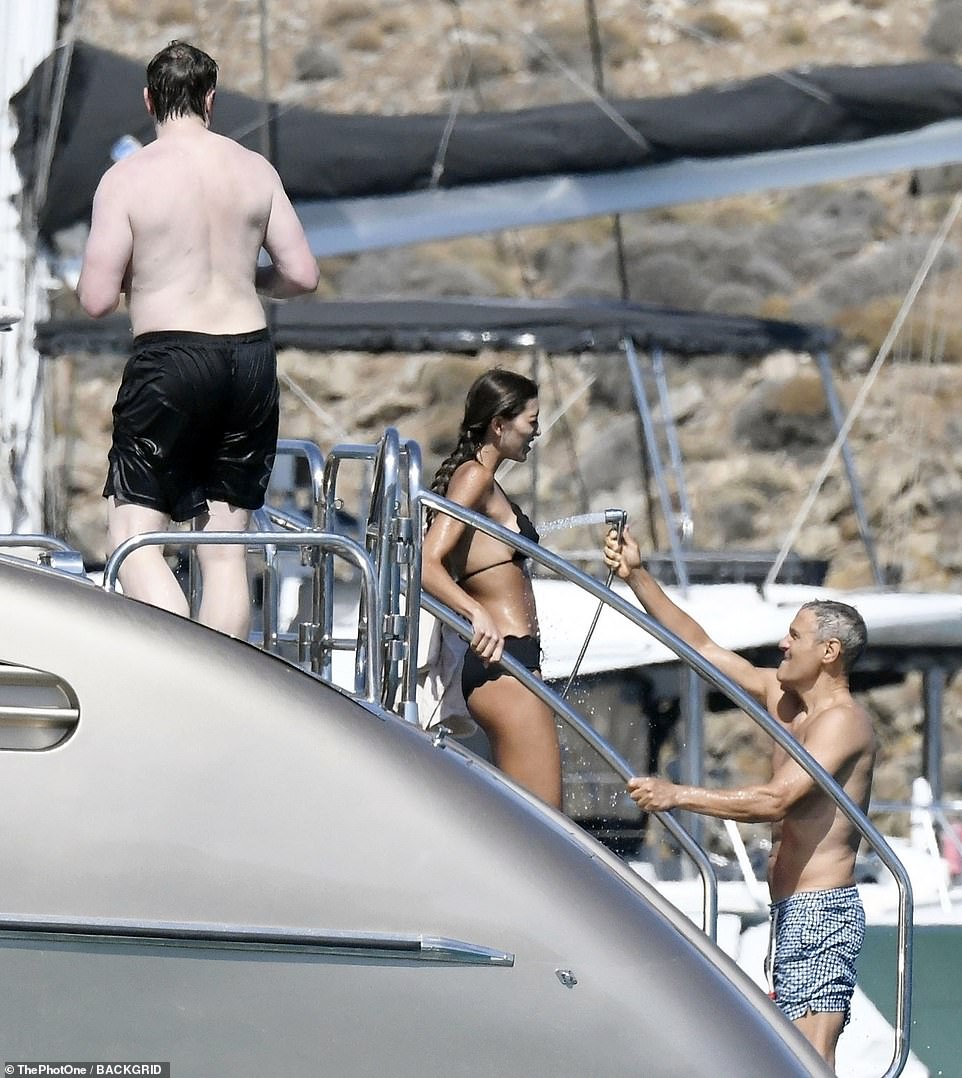 Shenanigans: Cheeky Ari (right) then turned the hose onto his beloved

After a much vaunted bid for Twitter that was accepted by the platform’s board, Musk has now backed out of the deal expressing concerns that Twitter had been misleading about the number fake accounts.

He has not presented any evidence to support his claims.

He originally agreed to a $1 billion breakup fee as part of the buyout agreement, although it appears Twitter CEO Parag Agrawal and the company are settling in for a legal fight to force the sale.

The founder of electric car company Tesla, sent a letter to Twitter saying he was pulling out of the controversial deal he made in April to buy the platform for $54.20 per share, or $44 billion in total.

Such merger agreements are ‘designed to prevent buyers from getting cold feet and deciding they want to walk away,’ law expert Lipton explained.

Besides Musk’s accusations of Twitter’s ‘false and misleading representations’ of the number of fake accounts, lawyers also point to recent Twitter employee layoffs and hiring freezes, which they say are contrary to the company’s obligation to continue operating normally.

Those arguments may be valid, but they do not merit pulling out of the deal, says Lipton, dismissing them as ‘nitpicky.’

That leaves the possibility that the multi-billionaire is actually trying to renegotiate the price down.

This tactic has been used successfully elsewhere, such as by LVMH. Two years ago, the global luxury giant broke off a deal to acquire Tiffany before getting a discount.

But experts don’t see how Musk and Twitter could agree on a different price at this point, given that the platform’s stock has lost more than a quarter of its value since late April. 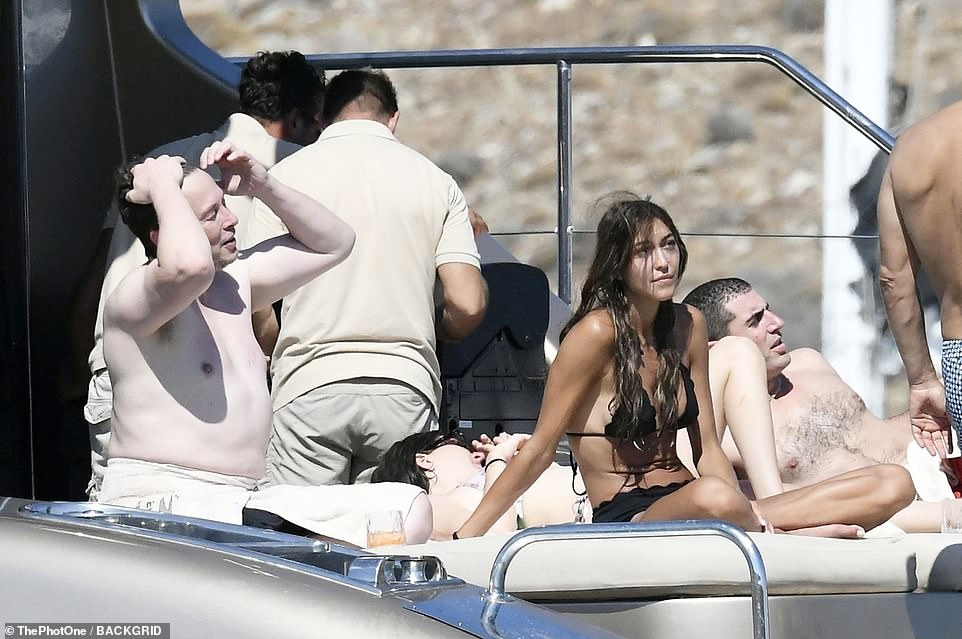 Life’s a beach: Elon (left) dried off as he and his companions shot the breeze 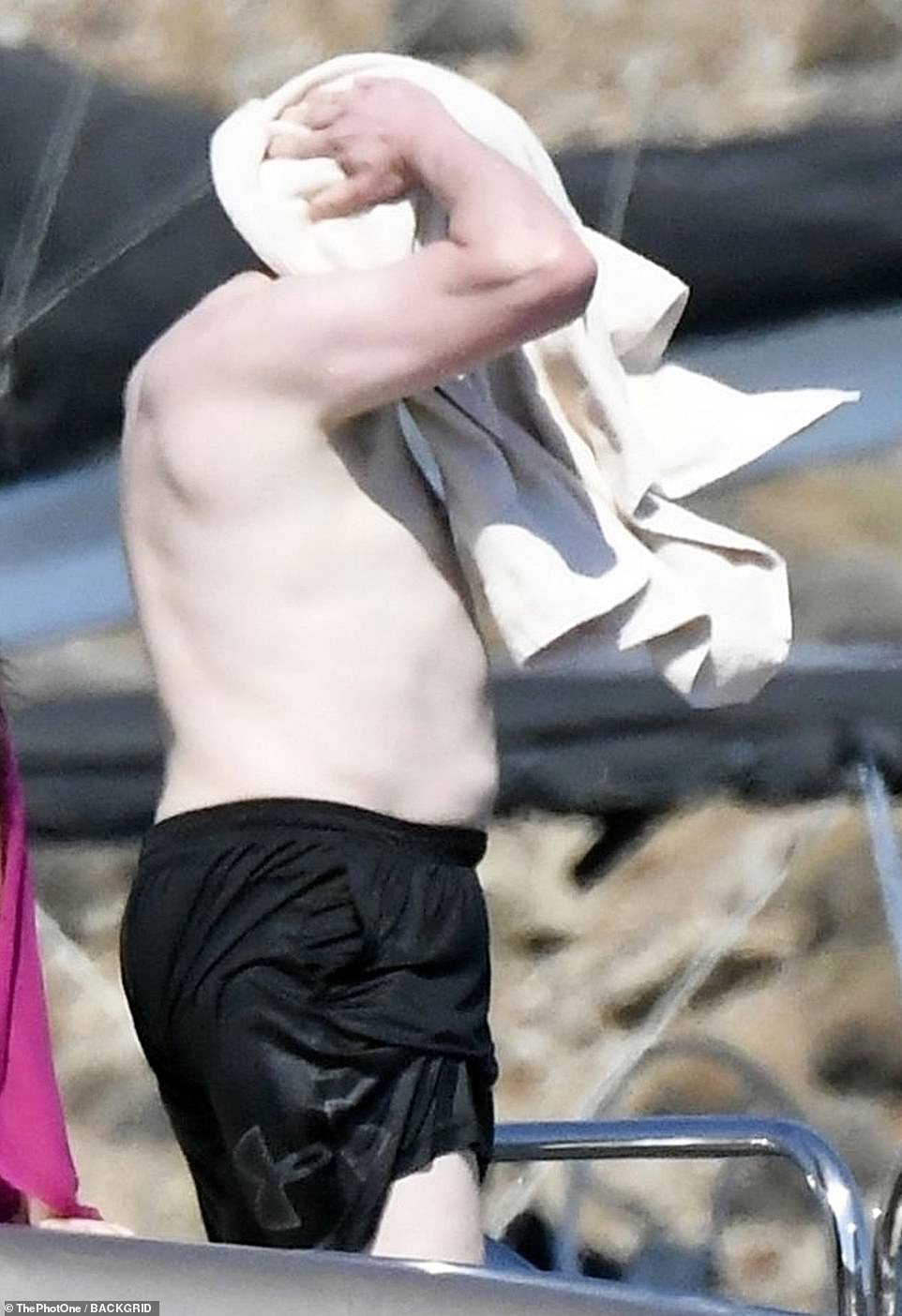 Post swim: The entrepreneur dried himself down after his dip 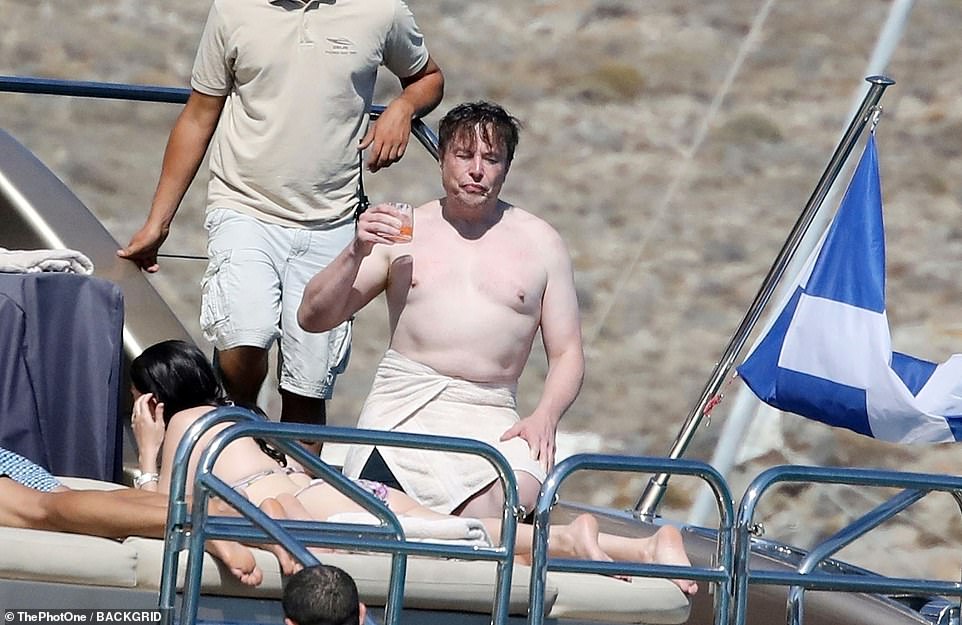 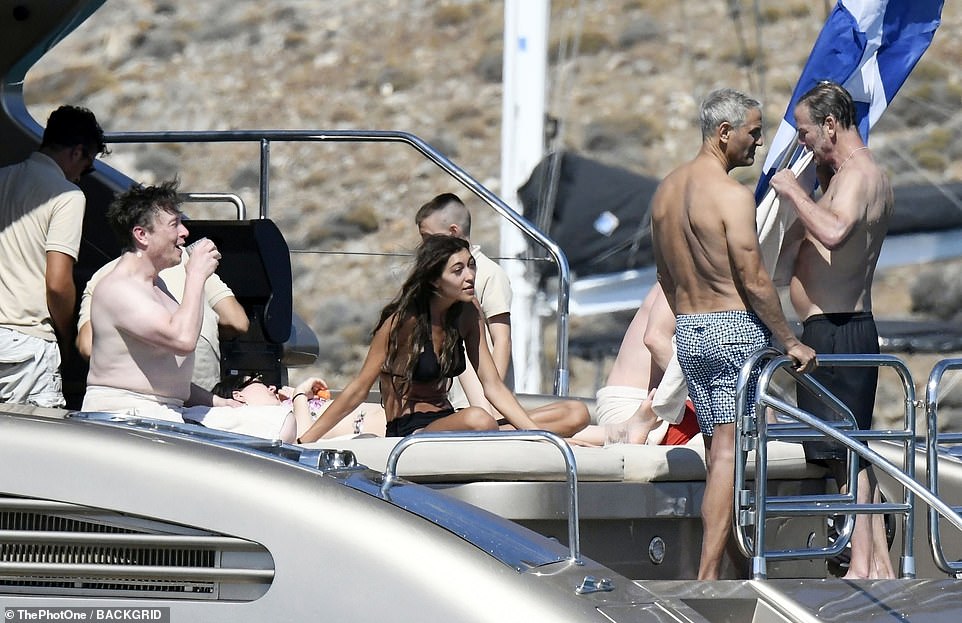 Lol: Elon (left) appeared in high spirits as the large gang of pals soaked up the sun 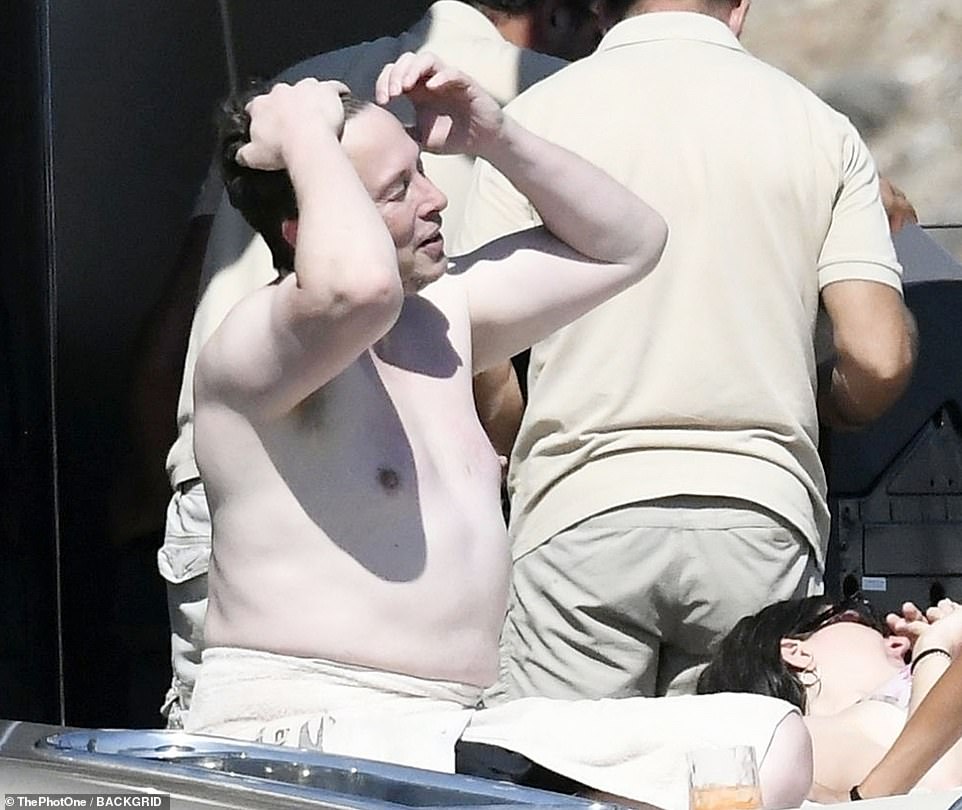 Getting the right look: The businessman could be seen adjusting his dark locks 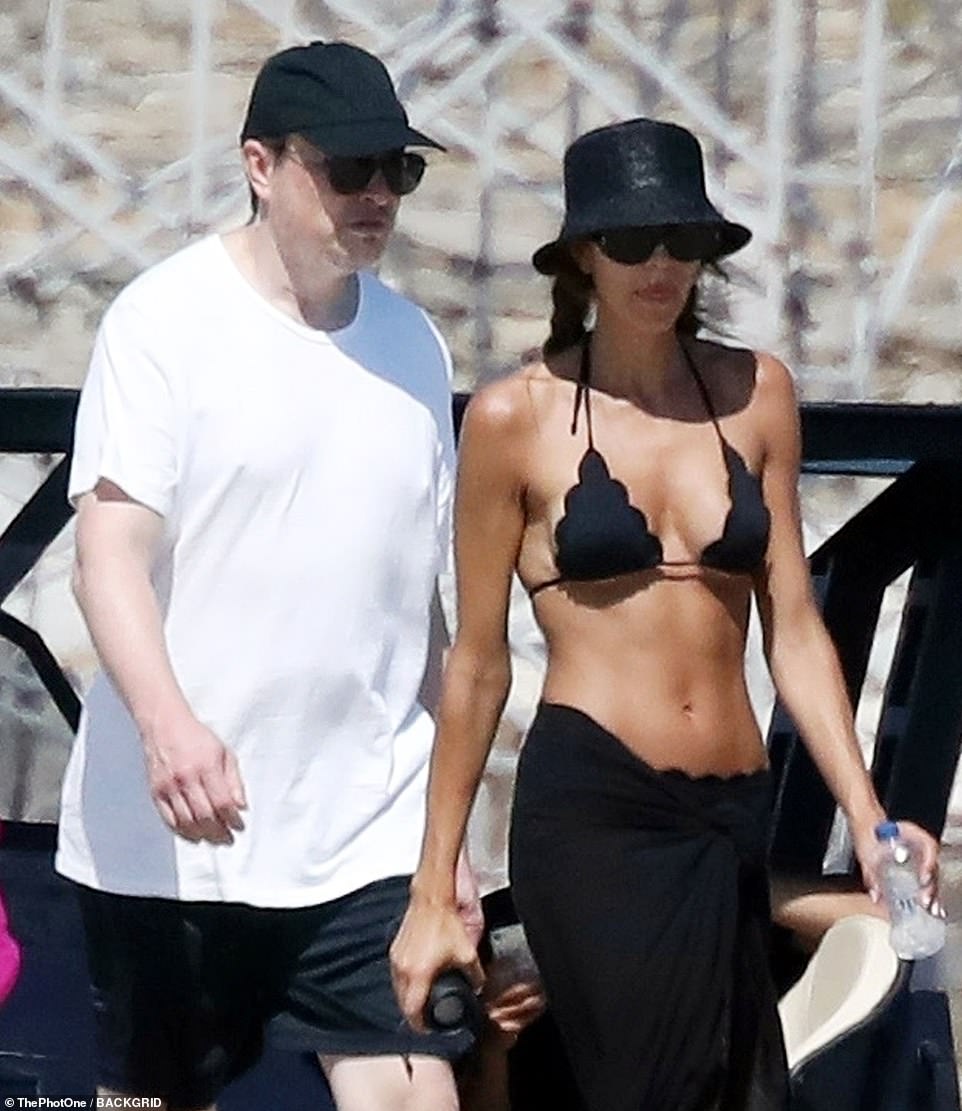 Good morning: Earlier in the morning the trio arrived at the port with Elon donning a white T-shirt over his swimsuit

Sunny days: Elon slipped his feet into flip flops and shielded his eyes behind sunglasses 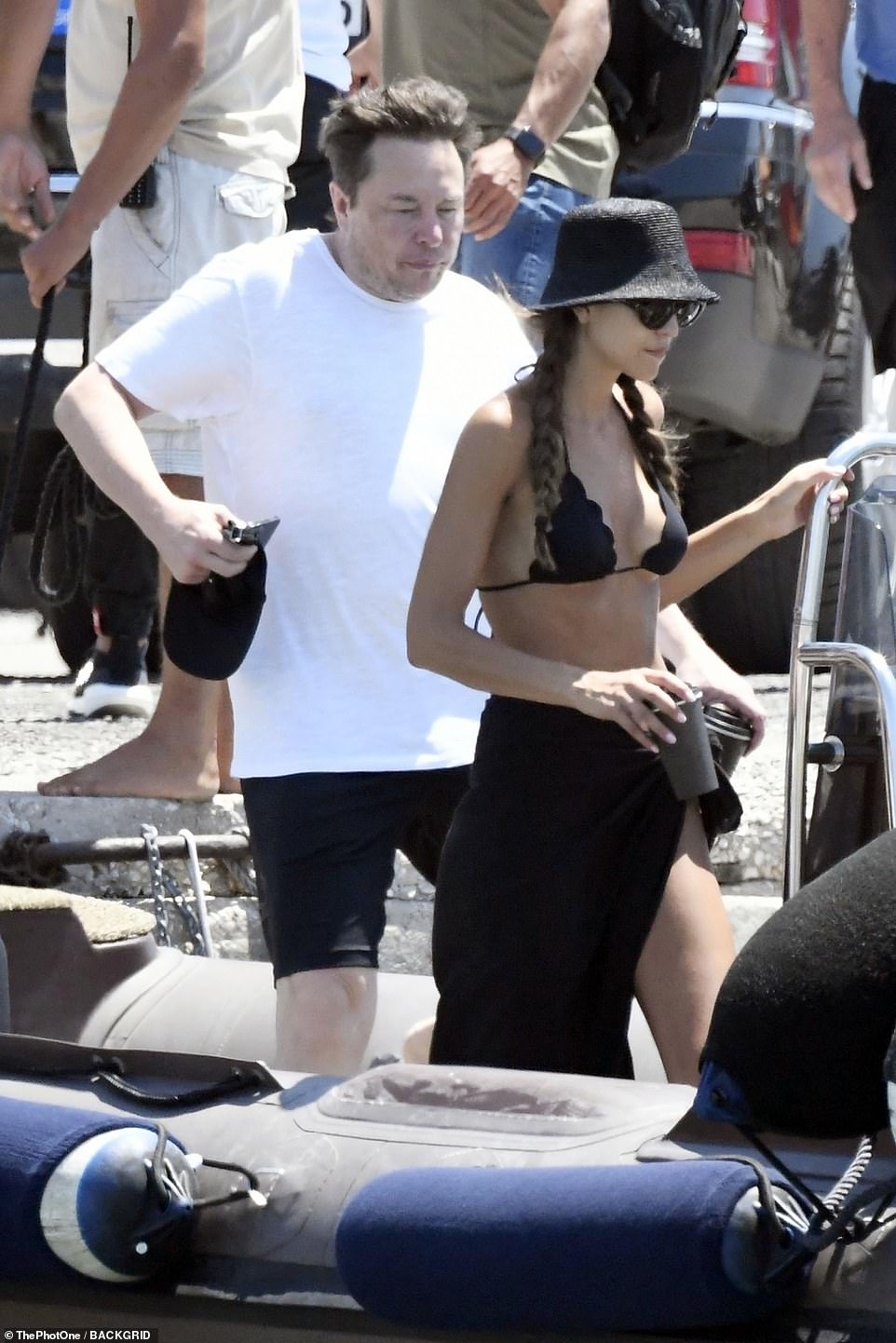 Safety first:  Gorgeous Sarah protected herself from the scorching weather donning a bucket hat and shades for the early morning outing 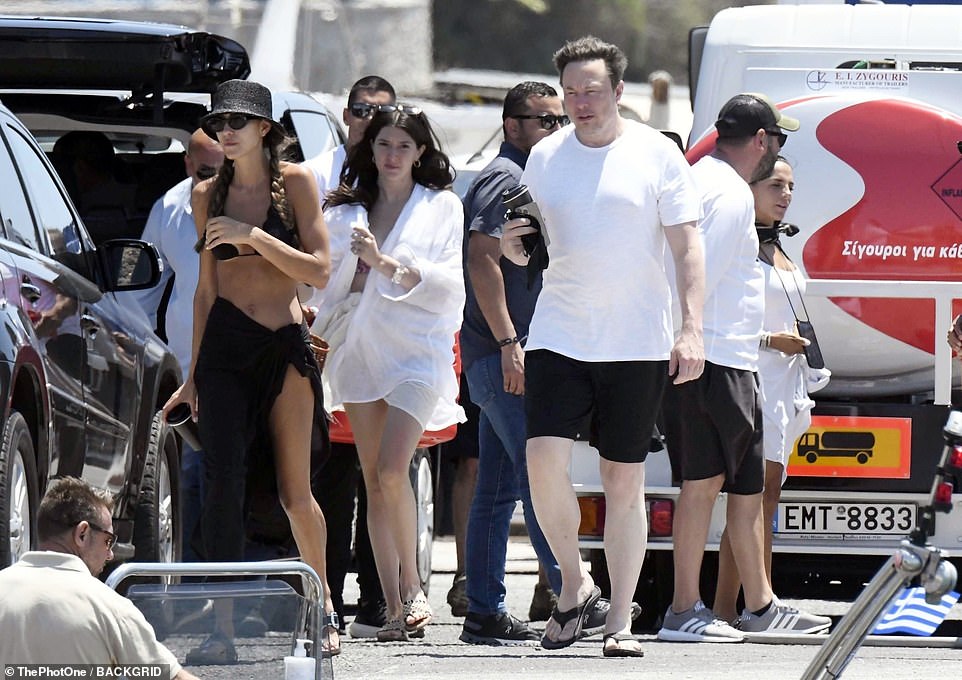 Off to sea: Sarah (left) completed the look with a black sarong as she was helped onto a dingy before heading out to the multi-million pound yacht 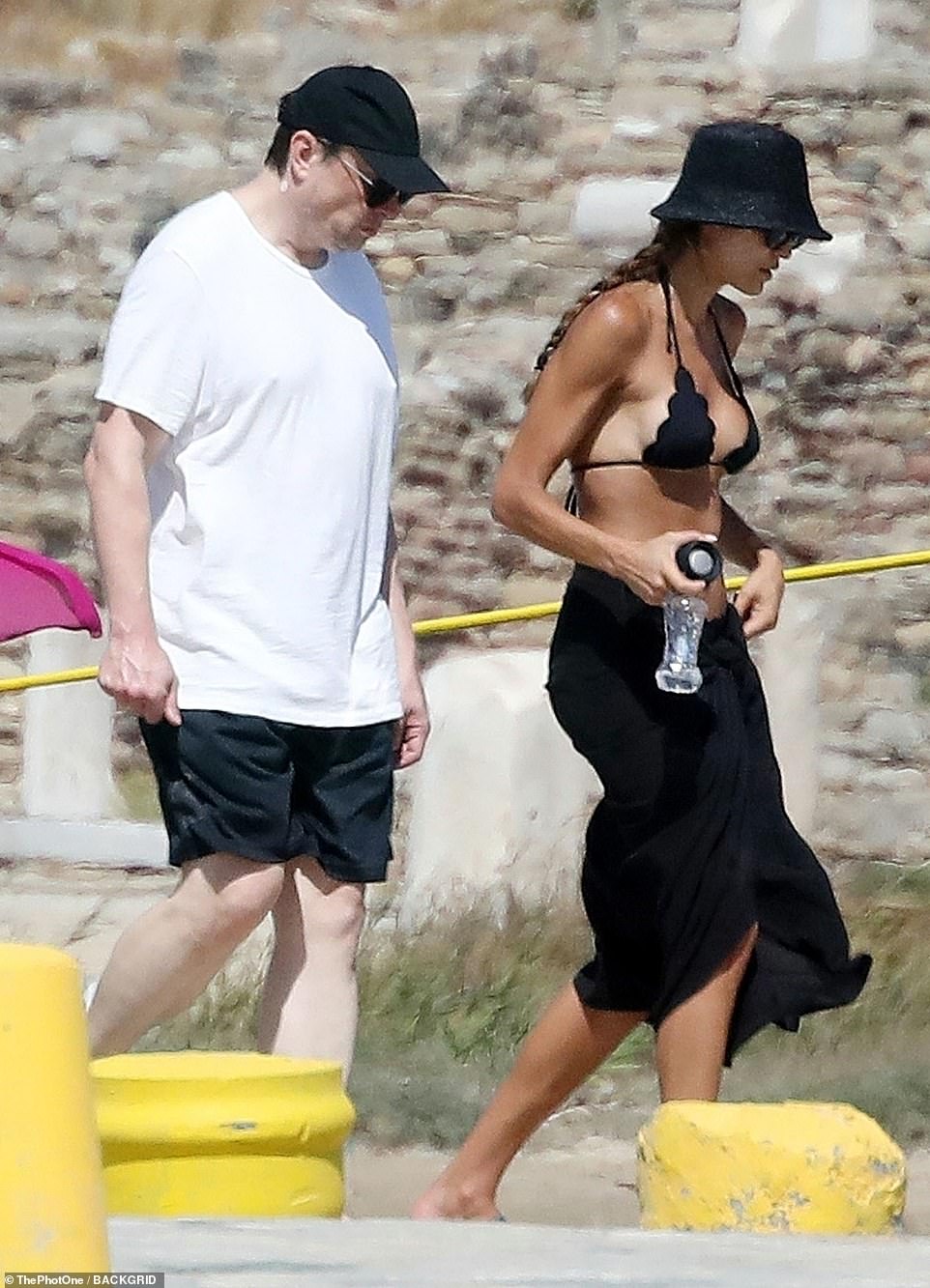 Friends: Elon joined his pal as they made their way towards the extravagant vessel 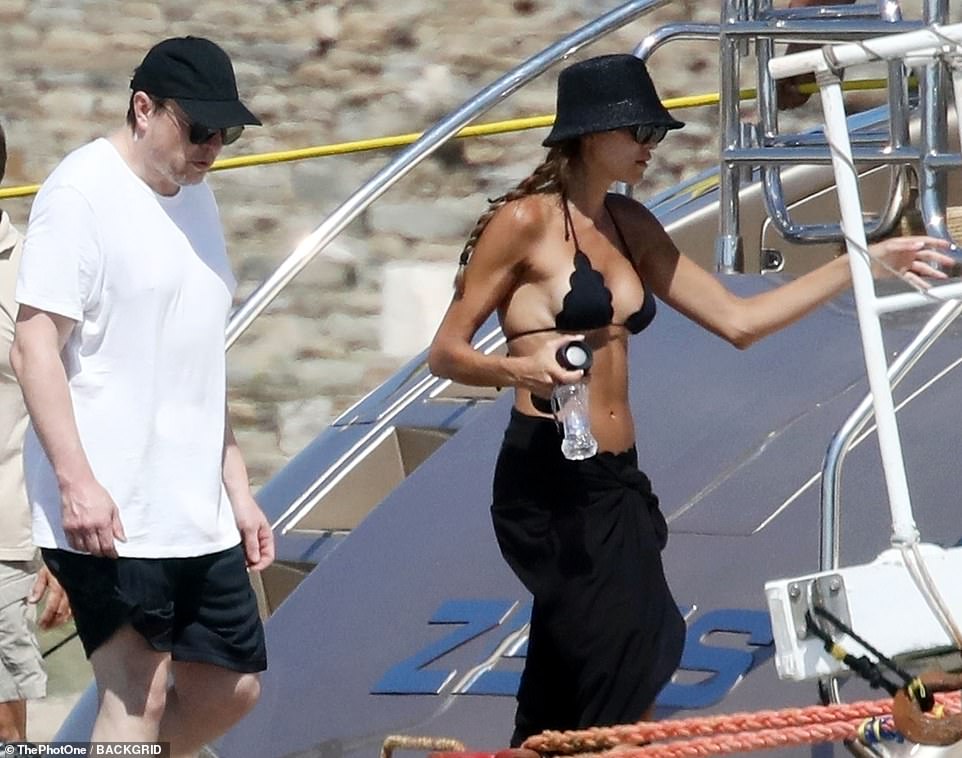 On bored: hey made their way on bored followed by their party 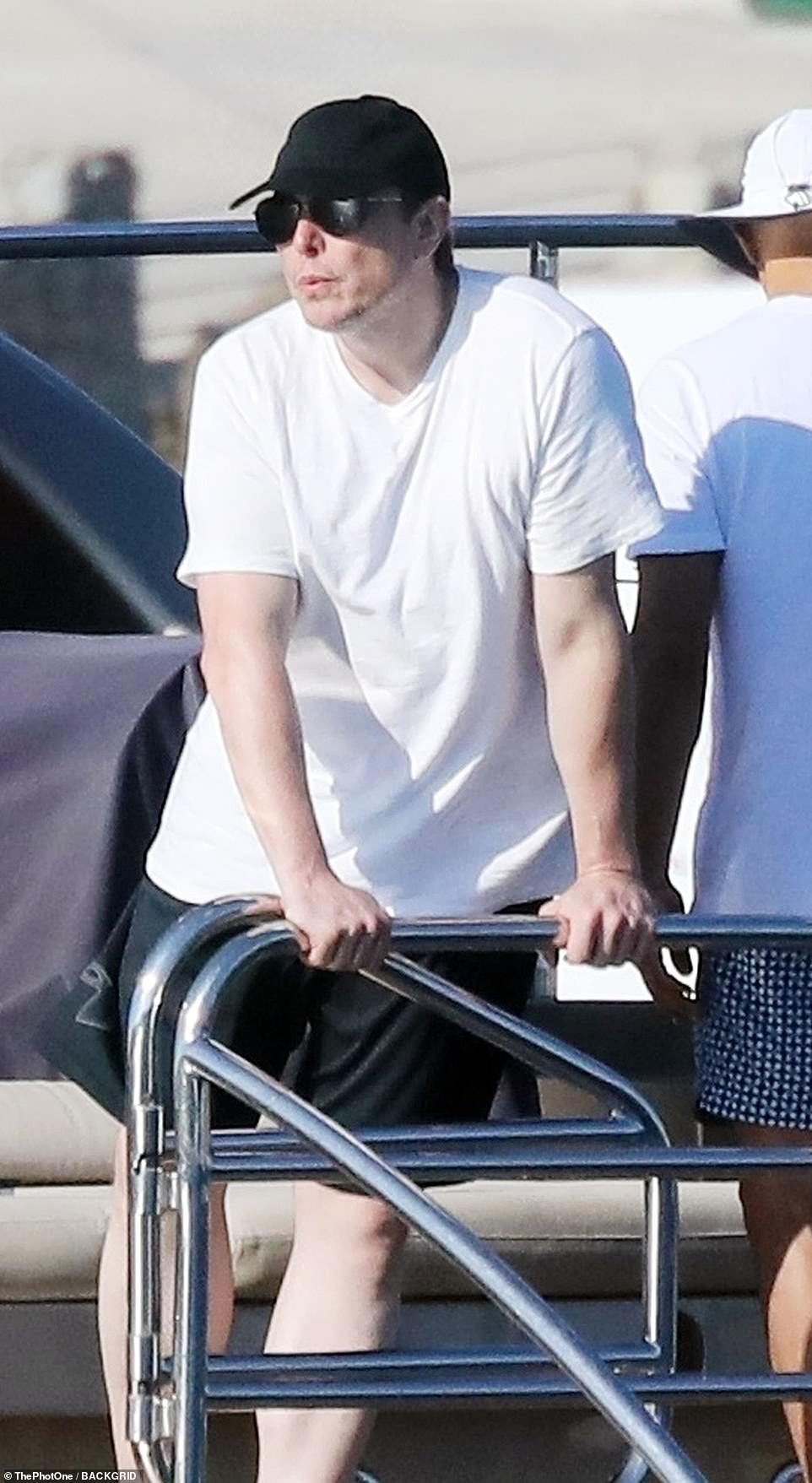 Enjoying the view: Elon gazed out at the spectacular views off the Greek island 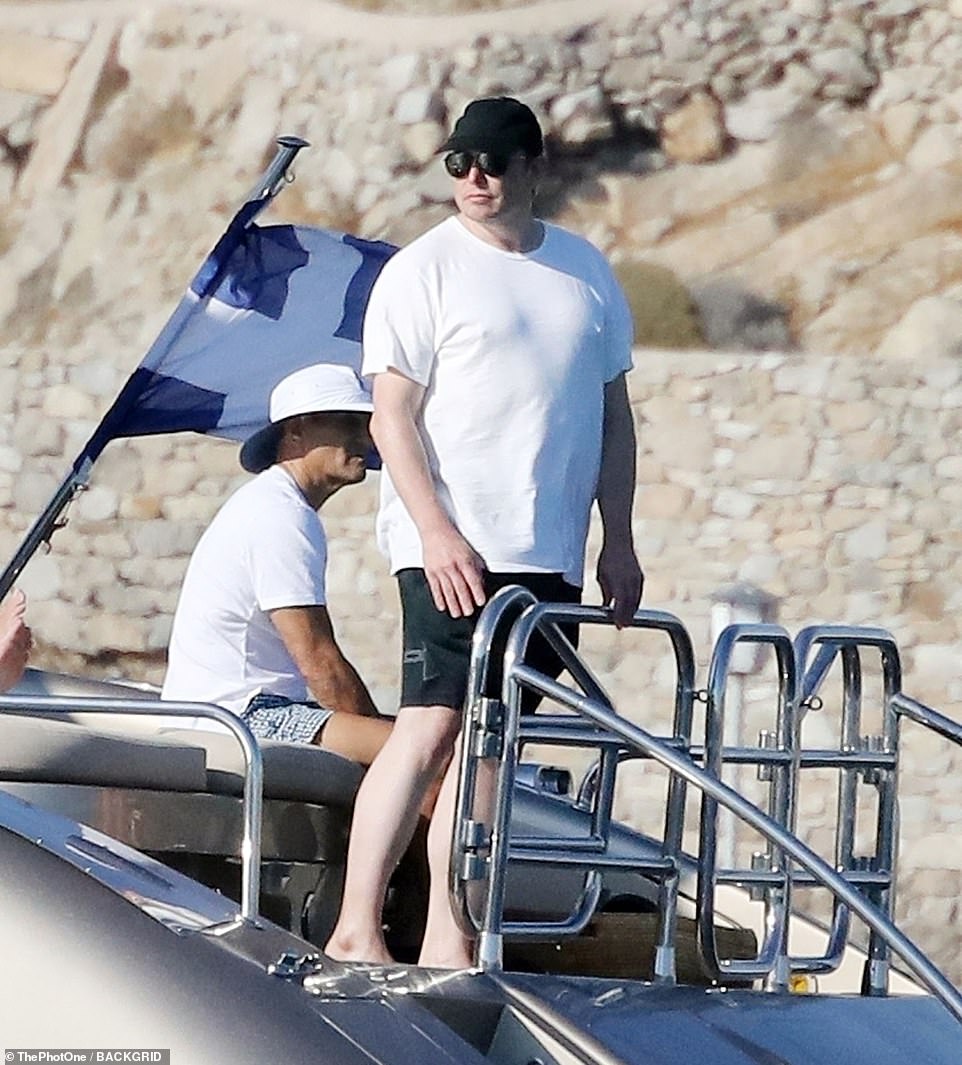 Wedding belles: Elon (left) was one of many celebrities who attended pal Ari (left) and Sarah’s lavish St Tropez wedding in May 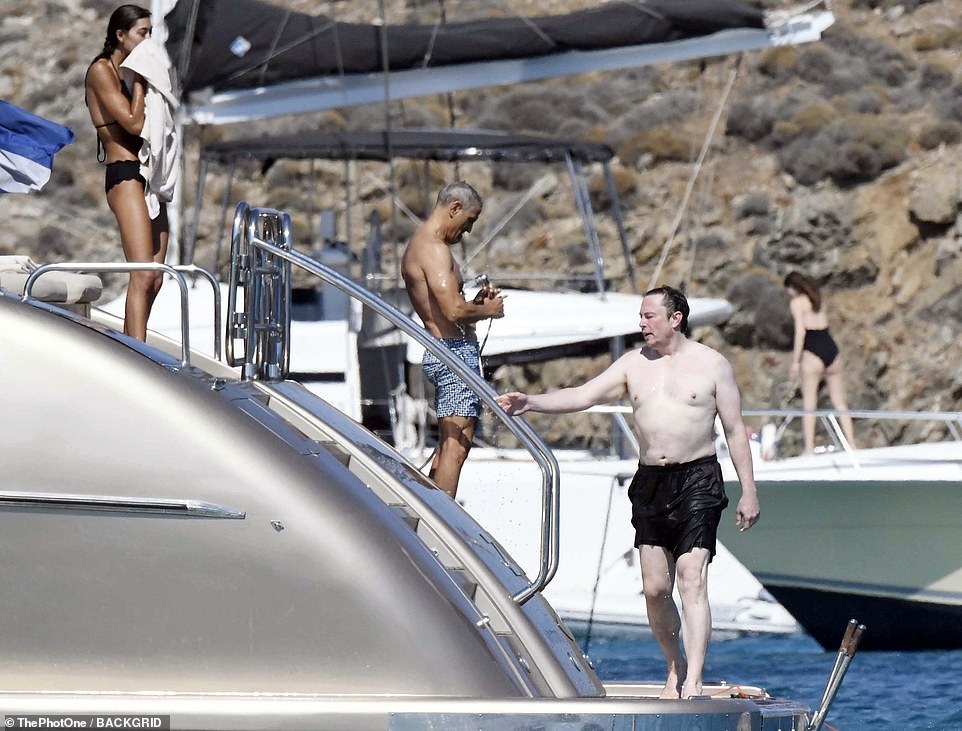 Not seen with the group was Australian actress Natasha Bassett, 27, the latest beauty to be romantically linked to the billionaire and who was with him at Ari and Sarah’s May wedding in St. Tropez in the South of France 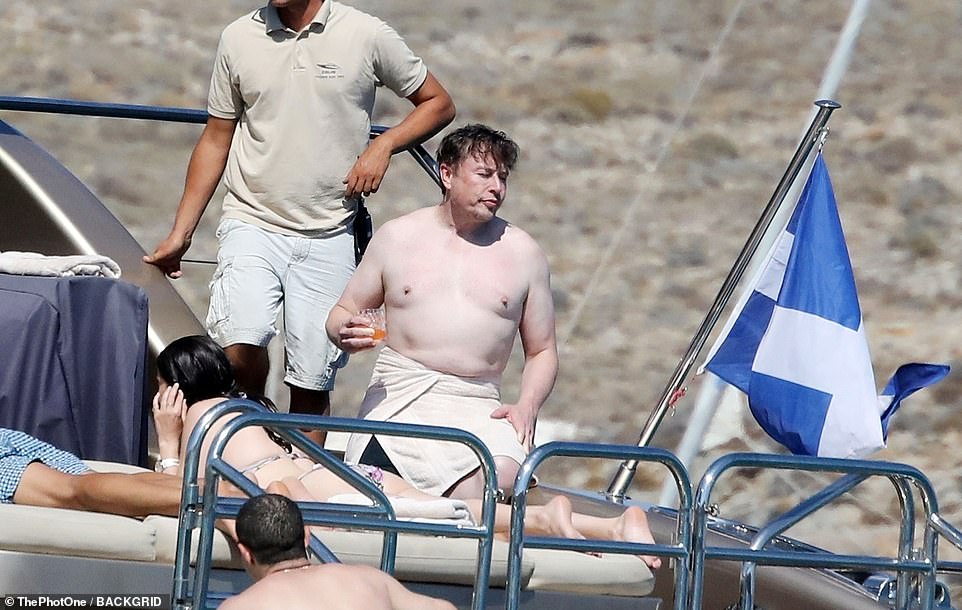 Drama: It comes after Elon backed out of a £35 Billion twitter deal