EXCLUSIVE:Sen. Joni Ernst, R-Iowa, along with other GOP senators, is set to give a speech on the Senate floor Wednesday afternoon slamming “Bidenomics” and increasing prices due to inflation.

Ernst is expected to blast the “sky-high” gas, food and housing prices seen in recent months under the Biden administration, according to the speech first reviewed by Fox News Digital.

“The administration’s own statistics reveal inflation jumped nearly 10 percent in the last year—the biggest increase in over four decades,” the speech explains. “Democrats keep telling us not to worry and that the problem is only temporary… yet every month, prices keep climbing … and climbing… and climbing.”

Ernst will reference her “The Price is Up” speech given on the Senate floor last year, saying she warned her colleagues “Bidenomics was causing inflation to spin out-of-control.” 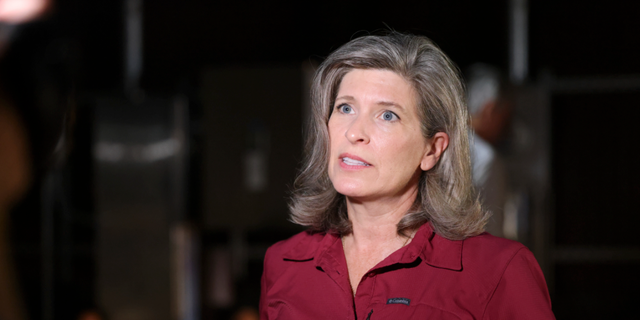 Senator Joni Ernst will be referencing her "The Price is Up" speech given on the Senate floor last year, saying she warned her colleagues "Bidenomics was causing inflation to spin out-of-control." (Office of Sen. Joni Ernst)

The senator will cite the administration’s “reckless spending” and its efforts to end domestic oil production as several of the main reasons the American people are experiencing higher costs.

Last week, White House press secretary Karine Jean-Pierre shot down calls to increase oil drilling in the U.S., saying the country does not need it.

When asked about why the U.S. is not drilling more domestically, Jean-Pierre responded: “Because we don’t need to do that. What we need [oil companies] to do is, with the oil that’s out there, we need them to refine that oil so that the capacity can go up and that prices would go down.”

“Folks, Americans shouldn’t have to play guessing games about whether or not their paychecks can be stretched far enough to avoid going over a financial cliff,” according to the speech.

Inflation rates prior to Biden taking office were as low as 1%, Ernst is expected to say while noting that the U.S. inflation rate is now nearing 9%. The senator will slam large spending bills Democrats are pushing, saying they will hurt small businesses and raise taxes on the American people. 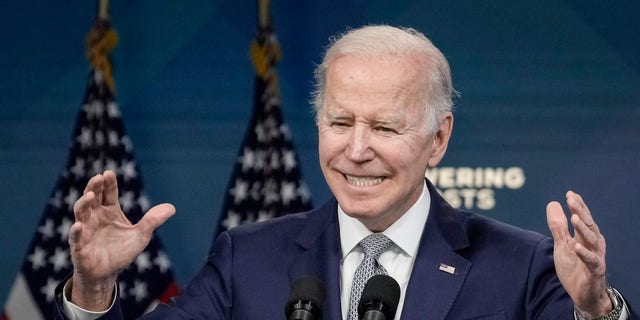 President Biden speaks about inflation and the economy in the South Court Auditorium on the White House campus May 10, 2022 in Washington, DC. (Getty Images)

Last month, Biden laid out a plan to tackle inflation, calling it his “top domestic priority,” and stressed that his administration’s policies will “help, not hurt,” Americans.

The president’s plan centers on asking large corporations and the wealthiest Americans to not engage in price gouging and to “pay their fair share in taxes.”

The senator also featured a parody video modeled after “The Price Is Right Cliffhanger game”, featuring Biden as the Yodeler. 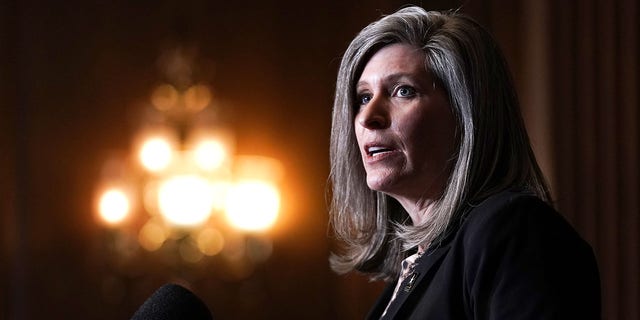 Senator Joni Ernst, a Republican from Iowa, speaks during a news conference following a weekly meeting with the Senate Republican caucus at the U.S. Capitol in Washington, D.C. (Photographer: Greg Nash/The Hill/Bloomberg via Getty Images)

Ernst currently serves as vice chair of the Senate GOP Conference and will be joined on the Senate floor by Sen. Roy Blunt, R-Missouri, and Mike Lee, R-Utah.