Far-left radicals are using a map of pro-life crisis pregnancy centers published by two professors at the University of Georgia to target those centers, dozens of which have already been vandalized, threatened or attacked since the draft of the Supreme Court opinion overturning Roe v. Wade leaked to the media.

The “Crisis Pregnancy Center Map” publishes the exact street addresses of pro-life clinics around the country, allowing users to identify the closest clinics to them.

The stated purpose of the map is “to provide location information about all of the crisis pregnancy centers operating in the U.S.” The website refers to such clinics as “fake women’s health centers.”

Left-wing extremists are using the map to identify pro-life clinics, while stopping just short of explicitly calling for violence against the centers, which have come under attack across the country. 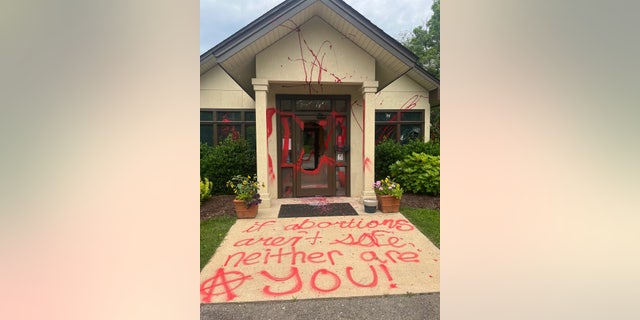 Puget Sound Anarchists, an antifa-aligned website run out of Washington state, linked to the map in a post about vandalism of a clinic in the state. “You can find your nearest fake abortion clinic on the Crisis Pregnancy Center Map,” the post said, linking to the map.

Minnesota-based group Twin Cities Encampment Responders tweeted out a link to the map shortly after the court released its decision in Dobbs v. Jackson Women’s Health on Friday.

“A map of anti-abortion fake clinics, including dozens around the Twin Cities area… you know, just because information is power,” the group wrote in the tweet, which was shared hundreds of times on the platform.

The group, which didn’t return a request for comment, describes itself as “Autonomous individuals coming together to organize eviction defense, cop watch, & mutual aid for Twin Cities encampments & beyond.”

Colorado Liberation and Autonomy, a blog aligned with the antifa movement, tweeted a link to the map with the caption, “Defend reproductive rights. If abortions are not safe, neither are you.”

A graphic accompanying the tweet, which was attributed to an anonymous submission, read: “Your local crisis pregnancy center tonight. Mask up. Stay dangerous.”

The Colorado group didn’t return a request for comment.

A wave of violence has swept across pro-life pregnancy clinics since the Dobbs decision first leaked last month. A group calling itself Jane’s Revenge is credited with the firebombing of a Wisconsin pregnancy clinic last month, and dozens of other attacks since then.

In a letter earlier this month, Jane’s Revenge vowed to escalate its tactics.

The letter described how “easy and fun it is to attack” and vowed to take “increasingly drastic measures against oppressive infrastructures” – by which it means pro-life clinics – saying this time “those measures may not come in the form of something so easily cleaned up as fire and graffiti.”