A retired wildlife photographer in Florida is speaking out after capturing an image of a heron carrying a baby alligator away from its guardian.

Ted Roberts, who is now a volunteer tour guide at the Orlando Wetlands Park in Christmas, Florida, told Fox News Digital that he saw the young reptile get snatched by a Great Blue Heron after he heard “commotion” happening in between tours.

The heron jumped out onto the road with the baby alligator in its mouth while an adult alligator gave chase, Roberts wrote in a Facebook post he shared with the Orlando Wetlands Park group, on Sunday, Nov. 13. 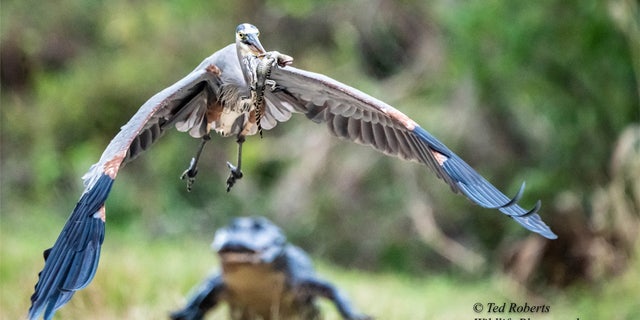 Ted Roberts, a Florida resident who volunteers as a tour guide at the Orlando Wetlands Park, saw a Great Blue Heron carry a baby alligator away while an adult alligator gives chase in the background.
(Ted Roberts Wildlife Photography)

“I am thrilled, stunned and humbled that the photo is garnering so much attention,” Roberts told Fox News Digital.

“It was an instance of being in the right place at the right time and being trained to be ready – which sums up what so much of wildlife photography is about,” he continued.

Roberts said his volunteer work at the Orlando Wetlands Park provides him with many photo opportunities because “the biodiversity level is very high.”

“I am very blessed to be part of a community of photographers and volunteers at Orlando Wetlands Park,” Roberts said. “We support and appreciate each other’s photography, so the recognition that this particular photo is receiving feels like an extension of that community.” 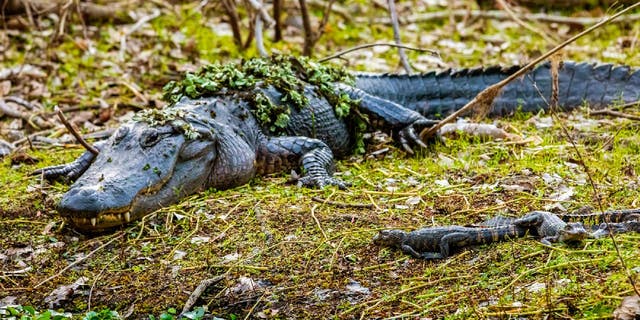 Mother alligators are known to care for their young.
(iStock)

Roberts suspects that the adult alligator who chased after the baby alligator was the animal’s mother.

Female alligators have been found to “aggressively defend their young” during the first few years of their lives, according to the Smithsonian National Zoo & Conservation Biology Institute, a Washington, D.C.-based animal care and research center.

Male alligators, on the other hand, are said to be “solitary” and “territorial,” according to Defenders of Wildlife, a national nonprofit conservation organization.

PENNSYLVANIA EMOTIONAL SUPPORT ALLIGATOR IS UP FOR ‘AMERICA’S FAVORITE PET’

In some instances, male alligators have been found to prey on hatchlings [juvenile alligators], according to Fauna Facts, an animal and pet resource website. 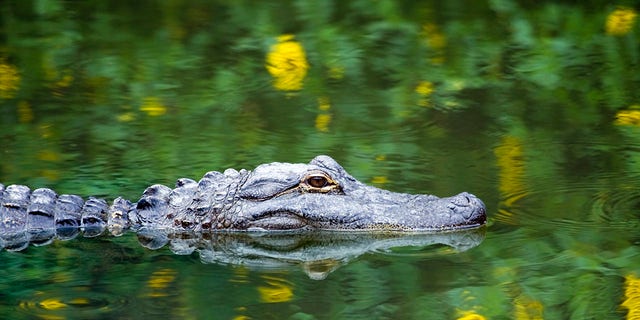 Alligators are reptilian predators that hunt in water and land.
(iStock)

Other predators that are a threat to young alligators and unhatched eggs are raccoons, otters, fish and wading birds, according to the Florida Fish and Wildlife Conservation Commission.

Adult alligators aren’t safe either and can fall victim to cannibalism or predation, the wildlife agency notes.

Researchers recently found a whole five-foot alligator inside a Burmese python, according to FOX 35 Orlando.