Bret Baier narrates the hunt for the most iconic ships of World War II.

Fox Nation is honoring Memorial Day with two new series focusing on one of the most pivotal episodes of the 20th century, bringing light to America’s victories and losses from the Second World War.

“Lost Ships of WWII” and “Secrets of WWII” bring pieces of history to the fore just in time to honor Americans who have fallen in the line of duty by recounting the stories and sacrifices of heroic service members who paved the way to the future.

Fox News’ Bret Baier hosts the latest from “Lost Ships”as Rob Kraft and his team take viewers through their search for the USS Johnston aboard the RV Petrel, embarking on the deepest shipwreck dive ever attempted.

Lost in the depths of the South Pacific, the legendary ship is believed to sit approximately 8,000 feet deeper in its oceanic grave than the R.M.S. Titanic sits in its own, and when the team picked up on the ship’s possible debris trail, the search – and the story – began. 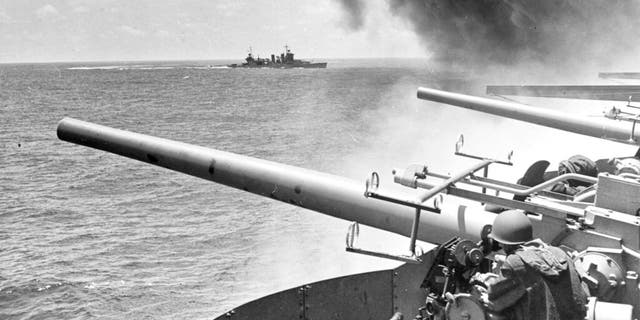 FILE – In this June 4, 1942 file photo provided by the U.S. Navy the USS Astoria (CA-34) steams by USS Yorktown (CV-5), shortly after the carrier had been hit by three Japanese bombs in the battle of Midway. Researchers scouring the world’s oceans for sunken World War II ships are honing in on debris fields deep in the Pacific. (William G. Roy/U.S. Navy via AP, File) (William G. Roy/U.S. Navy via AP, File)

The episode recaptures the naval crew’s acts of heroism and the ship’s fearless captain Ernest E. Evans as the Petrel team explores mangled debris buried at the bottom of the Philippine Sea.

The ship inched its way closer to Imperial Japan during the U.S.’s island-hopping campaign during World War II and became a key element in plans to take over the Philippines and deprive the Japanese of crucial resources along the way.

The ship, however, met its fate in a showdown with a fleet of Japanese warships at the Battle off Samar – one of the most significant naval battles of World War II – when enemy fire pummeled the destroyer after Evans elected to charge the Japanese fleet and defend nearby U.S. carriers.

The Petrel crew was forced to identify the mystery debris buried in the South Pacific and answer whether the wreckage belongs to the Johnston or its sister ship the USS Hoel. 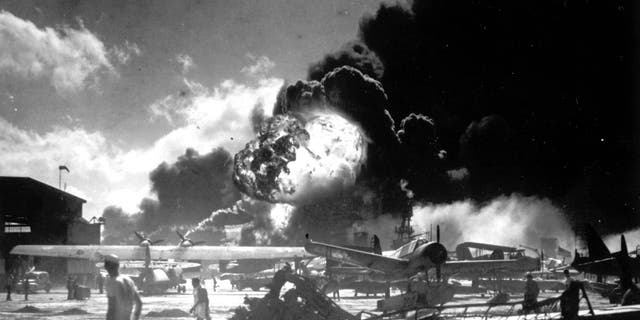 In this image provided by the U.S. Navy, sailors stand among wrecked airplanes at Ford Island Naval Air Station as they watch the explosion of the USS Shaw in the background, during the Japanese surprise attack on Pearl Harbor, Hawaii, on December 7, 1941. (AP Photo/U.S. Navy)

The latest installment of “Secret History” brings another unique tale from the pivotal world history chapter by recapturing the behind-the-scenes heroes who helped defeat Imperial Japan with weapons as simple as pencil and paper.

Fox News’ Martha McCallum hosts as Fox Nation delves beyond the historic tragedy of the December 1941 attacks on Pearl Harbor and into Station HYPO – a secret intel unit situated underground, rife with cryptologists ready to make and break codes. 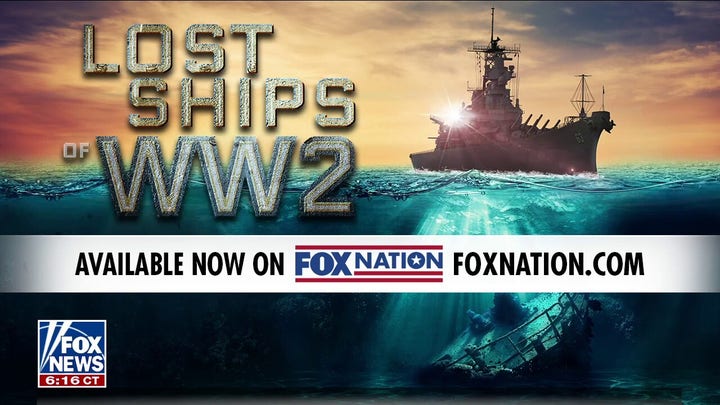 While discussing the intel unit housed in the basement of a building at the Hawaiian naval base, the episode dug into code breaking – an art that involved immersion into Japanese culture and fear exacerbated by the siege on Pearl Harbor.

Cryptology moved to the forefront of breaking Japan’s code as Americans feared what might come next, but key wartime figures saw that the U.S. develop an edge on intel to defeat the Japanese.

To learn more about the secrets and lost ships of World War II, sign up on Fox Nation today.

Fox Nation is honoring service to this great nation! All active military members and veterans can sign up for Fox Nation and get their first year FREE!

Fox Nation programs are viewable on-demand and from your mobile device app, but only for Fox Nation subscribers. Go to Fox Nation to start a free trial and watch the extensive library from your favorite Fox News personalities.