Republican Gov. Brian Kemp said Monday that he wants Georgia to provide grants to school districts to help students catch up on what they might have missed because of the COVID-19 pandemic, expand the number of school counselors, encourage teacher aides to become full-fledged teachers and pass a law requiring school lockdown drills.

Kemp unveiled a relatively modest set of K-12 education proposals as part of his second-term reelection effort at an elementary school in Oconee County, the same school where one of his daughters was a teacher last year.

“We have more work to do to address pandemic learning loss, bring more educators and counselors into our schools, and keep our students and staff safe,” Kemp said at Dove Creek Elementary School in Statham, just outside Athens.

Kemp made a $5,000 pay raise for teachers a centerpiece of his agenda when he was running in 2018 and delivered the final chunk of the money this year, but he didn’t propose a pay raise for his second term on Monday, although in response to reporter questions, he said he would “continue to work support all state employees to make the pay scale competitive in the future.”

GEORGIA DEPUTIES SHOT AND KILLED SERVING WARRANT HAVE BEEN IDENTIFIED: ‘MEN OF CHARACTER’

Democrat Stacey Abrams, who is running against Kemp again after losing narrowly to him in 2018, has proposed boosting average teacher pay over four years to $75,000, and guaranteeing a starting salary of $50,000. The plan would cost $1.65 billion in new spending over four years, Abrams has said. 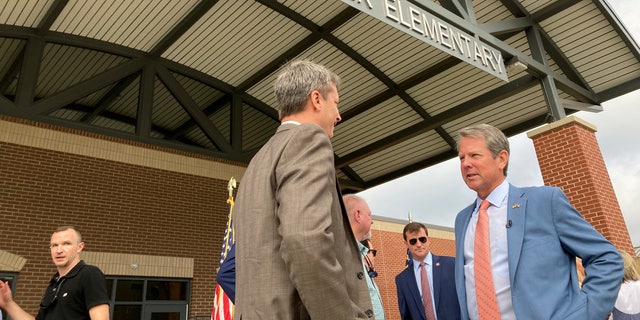 Alex Floyd, a spokesperson for Abrams, attacked the governor’s failure to propose an additional pay raise for teachers.

“With Georgia stuck at 21st in the nation in teacher pay, Kemp is declaring mission accomplished as our state struggles to recruit and retain the best and the brightest educators to serve our students,” Floyd said.

“I have news for people back home, she can only do that if she raises your taxes,” the Republican said Monday.

Kemp has made few promises thus far for what he would do in a second term. His biggest proposal has been a pledge to use $2 billion in surplus state money to provide $1 billion in state income tax rebates and $1 billion in property tax relief. Abrams has proposed a much more ambitious plan, including expanding Medicaid, promoting affordable housing, expanding college financial aid, tightening gun laws and blocking further restrictions on abortion.

Kemp said he would propose to lawmakers that the state should offer $25 million in grants to school districts using state money to provide additional tutoring, nontraditional staff, or boost existing services.

“By working with our local school systems and providing targeted funding to bring these kids back up to grade level, I am confident we can lend a helping hand to the students who need it most,” Kemp said.

However, the $25 million pales in comparison to the $6 billion in federal aid that Georgia’s 181 public school districts have gotten during the pandemic. School districts must spend more than $750 million of that money improving academic performance. Kemp said his program would be targeted only to 44,000 fourth-graders who are reading below grade level.

Kemp also said he would recommend giving districts another $25 million to recruit more counselors statewide. Right now, the state funding formula mandates funding for one counselor for every 450 students, but it has never been fully funded. The governor also proposed spending $15 million to give $3,000 to teacher aides who already have four-year degrees to become certified as teachers.

Kemp said he would seek to enhance school safety by passing a law requiring schools to offer “intruder alert drills” once each August and September, with a requirement to report drills to the state. Some fear such drills traumatize students, but Kemp said his proposal would allow parents to opt students out of the drills.