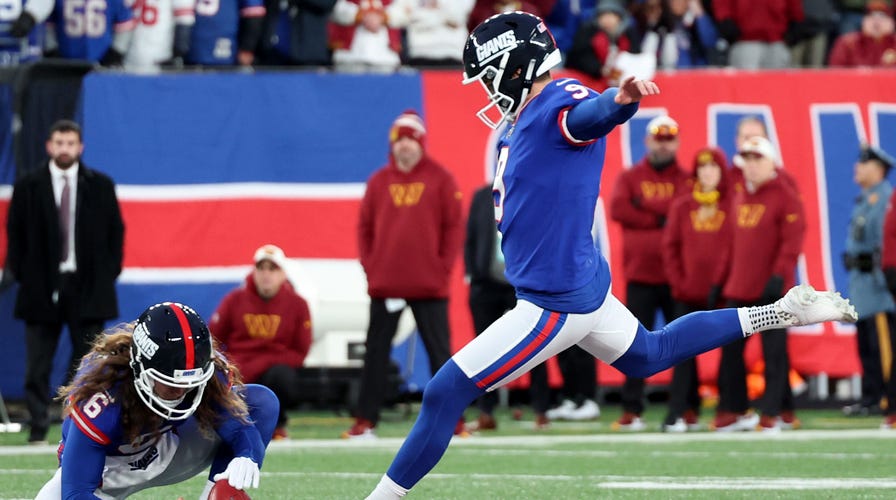 New York Giants kicker Graham Gano stepped up to what would’ve been the longest kick in team history at 58 yards in overtime, but he couldn’t knock it through for the win as they tied with the Washington Commanders, 20-20.

This game needed extra time and both teams had multiple possessions, which left the Giants five seconds and a chance for Gano to win it for their eighth win of the season. Gano hit a 63-yarder against the Giants while with the Carolina Panthers in 2018, so fans knew he had the leg to get this through the uprights.

Gano had the ball on target, but the distance wasn’t enough, and both teams walked away unscathed in the loss column. 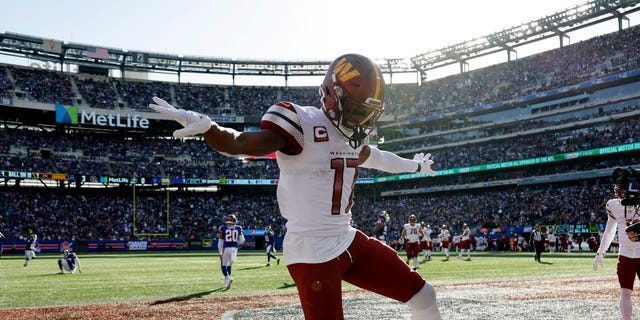 Terry McLaurin of the Washington Commanders celebrates after scoring a touchdown in the first quarter against the New York Giants at MetLife Stadium on Dec. 4, 2022, in East Rutherford, New Jersey.
(Al Bello/Getty Images)

It was an inauspicious start for the Giants as Daniel Jones fumbled on the first drive of the game, which set up a Commanders field goal.

Then, after a three-and-out for New York, Taylor Heinicke charged down the field and found Terry McLaurin for a 19-yard touchdown pass as he slipped a tackle and ran into the end zone.

But the 10-0 lead didn’t stop the Giants from battling back. Gano would knock home a 48-yard field goal on the ensuing drive, and after Washington had a three-and-out, Saquon Barkley ran 13 yards for the touchdown to tie the game.

GIANTS’ ADOREE’ JACKSON FOCUSES ON THE ‘BLESSINGS’ AMID PLAYOFF PUSH: ‘YOU CAN’T TAKE THESE GAMES FOR GRANTED’

Tied heading into the second half, Heinicke did what Jones did on the opening drive of the game, as his intended pass was knocked out of his hand before it came over, resulting in a fumble recovered by Azeez Ojulari.

New York would use that turnover to go up by a touchdown, as Jones found Isaiah Hodgins for his first career touchdown, a 6-yard strike to make it 20-13.

While the offense on both sides would slow down for most of the second half, the Commanders were able to put together a crucial drive, going 90 yards to tie the game at 20, which forced overtime. 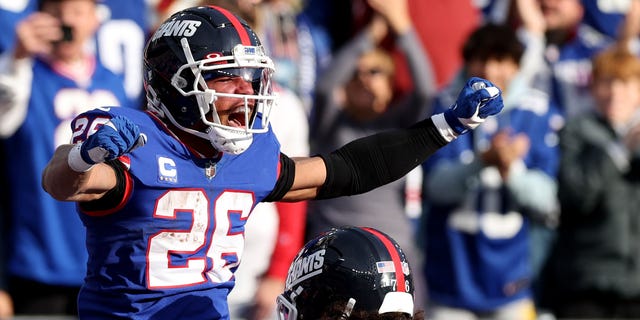 Saquon Barkley of the New York Giants celebrates after a touchdown in the second quarter against the Washington Commanders at MetLife Stadium on Dec. 4, 2022, in East Rutherford, New Jersey.
(Jamie Squire/Getty Images)

It was Jahan Dotson who broke a couple tackles to go 28 yards for the game-tying score. But the biggest play on the drive was on 4th-and-4 when Heinicke had to scramble out to his left and floated a ball to a wide open Curtis Samuel for a 20-yard gain that kept the drive alive.

The Giants had time left in the fourth quarter to win it in regulation, and it looked like Gano would’ve at least had a field goal chance when Darius Slayton jumped and got his hands on a ball deep into Commanders territory. But he couldn’t come down with it and the Giants would eventually punt it away.

Jones would have a perfect 200 yards on 25 of 31 through the air while leading the Giants in rushing with 73 yards on 13 carries. Other than his touchdown, Barkley finished with 63 yards rushing on 18 attempts, while catching five from Jones for 18 yards.

For Heinicke, he had another great day on the gridiron with 275 yards on 27 of 41 with two touchdowns. Brian Robinson Jr. had 96 yards on the ground to lead the Commanders in rushing, while McLaurin finished with 105 yards through the air on eight catches. 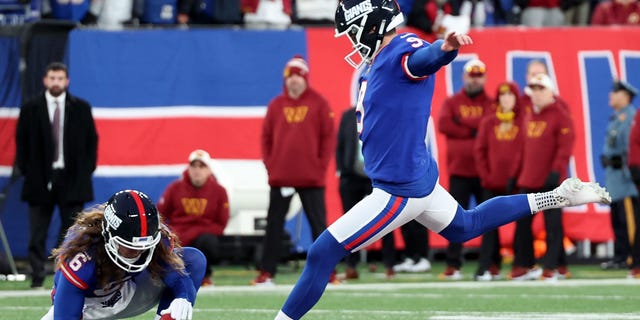 Graham Gano of the New York Giants misses a field goal in overtime against the Washington Commanders at MetLife Stadium on Dec. 4, 2022, in East Rutherford, New Jersey. The game ended in a 20-20 tie.
(Al Bello/Getty Images)

The Commanders will get the Giants again in two weeks following their bye week, and the Giants will have another NFC East matchup with the Philadelphia Eagles at MetLife Stadium next Sunday.