Boston Celtics coach Ime Udoka was given one-year ban after ‘multiple violations of conduct rules’ and he has also been handed ‘significant’ financial penalty after affair with female staffer: Owners face media for the first time

Grousbeck and President of basketball operations, Brad Stevens, faced the media in the aftermath of suspending their head coach for the entirety of the 2022-23 season.

Udoka’s enforced sabbatical lasts until June 30, 2023 with a decision on his future as head coach to be determined at a later juncture.

‘We’re not going to talk about the long-term because nothing has been decided,’ Grousbeck said.

The Celtics owner was unspecific as to whether Udoka’s absence will be without pay, simply stating there will be a ‘significant financial penalty when you net it all out.’

However, Scott Cacciola of The New York Times reports that throughout the suspension, Udoka will be ‘unpaid.’

The second-year coach, who led the C’s to the NBA Finals in his debut season, is alleged to have had an affair with a female staff member within the Celtics organization.

Stevens elucidated the Celtics have a duty to look after women in their organization following the saga, amidst a wave of ‘rampant bulls***.’

‘We have a lot of talented women in our organization and I thought yesterday was really hard on them,’ Stevens said of the rumor and innuendo surrounding Udoka and potentially involved parties. 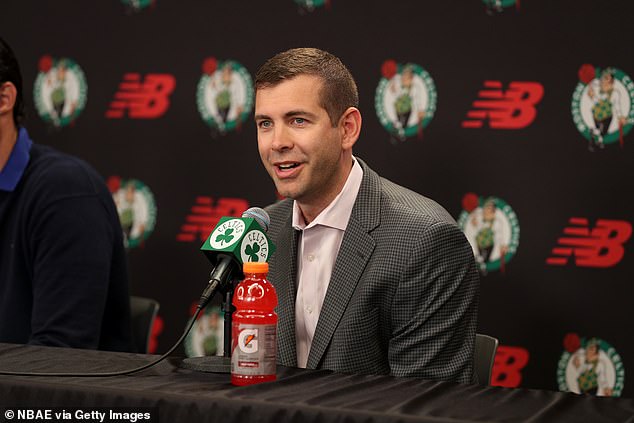 ‘Nobody can control Twitter speculation and rampant bulls***, but I do think we have a responsibility to make sure we are there to support them.’

With numerous names thrown into the situation on social media, Grousbeck was explicit that only Udoka was ‘facing penalty or reprimand.’

According to Grousbeck, the origination’s players are ‘very concerned’ about the situation and indeed allegations leveled at Udoka.

‘We think our culture is very strong,’ he added. ‘We’re very proud of it. But this has shaken it. I don’t think there is a wider issue than what we’ve spent several months uncovering.’

Joe Mazzulla — who has been an assistant with Boston since 2019 — will be the team’s interim head coach.

Stevens, who previously was the head coach of the Celtics, praised Mazzulla and illuminated what he will bring to an unquestionably talented roster.

‘He’s an exceptionally sharp and talented person,’ he said. ‘I believe strongly in him and his ability to lead people, to galvanize a room and get behind him.

‘And his ability to organize and understand all that comes with running a team through the season.’

Mazzulla was arrested for domestic battery in 2009 and was charged with fighting with police and underage drinking in 2008.

When asked about the battery arrest, Stevens admitted 34-year-old Mazzulla was vetted prior to his hire in 2019. 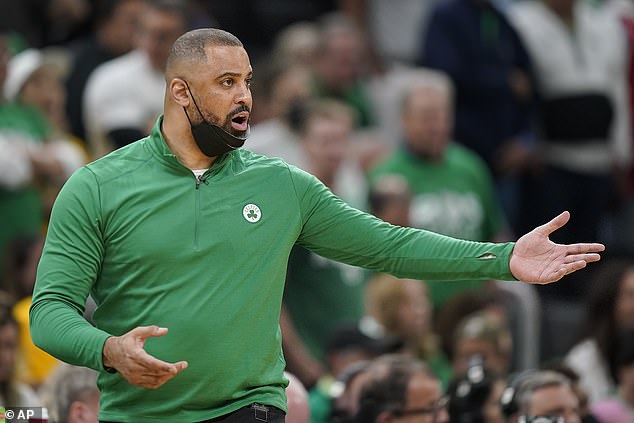 ‘I believe strongly that that shaped him into who he is today in a really good way,’ Stevens said of the team’s interim head coach.

Now they face a wholly unprecedented set of circumstances, just weeks before their opening regular season game vs. Philadelphia on October 18. 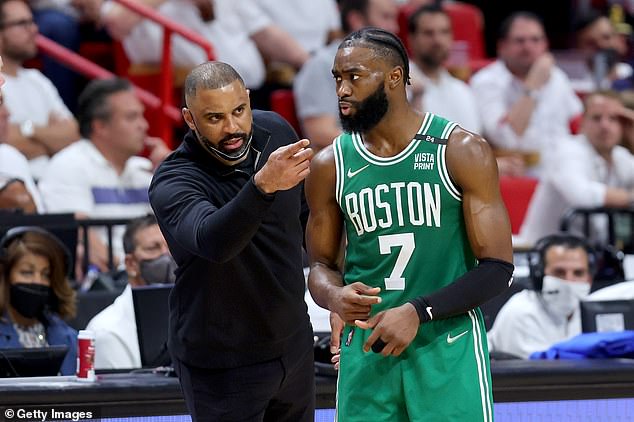