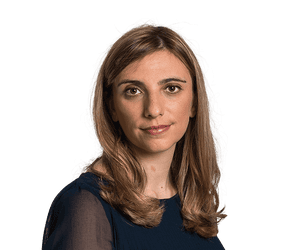 The thundering of planes across the skies over Richmond are a minute-by-minute reminder of why this west London constituency has suddenly been thrust into the national spotlight – but down on the pavements it is Brexit, not nearby Heathrow airport, that is disturbing the peace.

Zac Goldsmith, the local Conservative MP, who resigned his seat and his party over the decision to further expand the airport, called next week’s byelection to stand as an independent, anti-Heathrow candidate.

Goldsmith is a Brexiter in a seat that voted 72% to remain in the European Union, and local Lib Dems are determined Richmond Park’s byelection next Thursday will send a message to the government about voters’ attitudes to a hard Brexit as well as to a third runway.

The former Tory, a well-liked local face despite running a divisive campaign to be London mayor, has the edge over Lib Dem candidate Sarah Olney, a local accountant who only joined her party in 2015. Goldsmith now has a thumping 23,000 majority in the seat that was Lib Dem until 2010. Olney is also anti-Heathrow expansion, as is Labour’s Christian Wolmar. The dividing line is the EU.

Knocking on doors with Olney in north Kingston, where several of the manicured hedges are dotted with neon-orange Lib Dem signs, the party’s candidate says: “A lot of my close friends in the neighbourhood, they’re French, German, Spanish, Polish, although some are married to Brits or are now British citizens. They feel unwelcome. And I feel angry on their behalf.”

Richmond Park’s residents are the most highly educated in the country, according to research by the lecturers’ union UCU, with 63% having degrees. “They’re switched on, reading the news, they get a candidate on the doorstep and they want to challenge you, especially on Brexit,” Olney said. “Yes, a lot of people feel very strongly about Heathrow, but that is not moving their vote.

“Every single time people say they are switching to me, it’s Brexit: that’s the reason everyone gives. Brexit, Brexit, Brexit. And at the end of the day, that’s the issue where we are poles apart. It was bound to become the central point of the campaign.”

Olney’s campaign has had a few hiccups – she swiftly deleted a blog early in the campaign that had said she did not “think we should rerun the referendum”, but has now said she would vote against the triggering of article 50. “I would have a very strong mandate from the voters of Richmond Park to vote against it,” she said.

The party said 1,500 activists had campaigned in the constituency over a single weekend, well up on Witney, Oxfordshire, where the party saw its biggest swing in two decades and substantially reduced the majority of the Conservative candidate in David Cameron’s old seat.

Recycling boxes on Richmond streets are stacked with yellow flyers, with one resident grumbling she had received at least seven or eight from the Lib Dems alone. The party leader, Tim Farron, along with prominent Lib Dems such as Nick Clegg and Paddy Ashdown, and the area’s former MP, Susan Kramer, have visited the constituency multiple times to drum up support

“Every once in a while, a byelection can have real national significance,” Clegg said at one local meeting. “In Ribble Valley, it stopped the poll tax; in Crewe it ended Gordon Brown’s 10p tax hike; and in Brent East it demonstrated the level of public animosity towards the Iraq war. A Liberal Democrat victory on an unapologetically pro-European platform could cause the government to rethink its hard Brexit agenda.”

Goldsmith’s campaign has kept the focus local, holding quiet public meetings with residents rather than boisterous rallies like that of the Lib Dems. His team did not respond to several requests for an interview.

Outside Richmond station in the evening rush hour, no issues chime with voters other than the EU and Heathrow, with many casting doubts over Goldsmith’s stance but wary of committing to the Lib Dems.

“The main issue is coping with Brexit,” said John Plowman, a local resident. “Zac Goldsmith would have been better placed to do that in the Conservative party, rather than as an independent. The Lib Dems could convince me, but they have to be more robust. I’m not sure they’re tough enough to deliver.”

Tessa Knowle, a retired librarian, said local voters would find it hard to pick which issue mattered to them most. “Low-flying aircraft over your house when you are trying to go to sleep is not fun. They are so close together, and you just think: ‘When is an accident going to happen?’” she said. “I think people care equally about Heathrow and Brexit, though.”

Those with the strongest views about Heathrow said they were angry with the Lib Dems for trying to change the subject to Brexit. “Heathrow is the main issue without doubt,” said one local woman who declined to give her name. “I’ll be voting for Zac because I very much like the stand he’s made, I want to send a message to the government, and I certainly won’t be voting Lib Dem because of the way they are trying to take full advantage of this. How many MPs have they got again?”

Transport campaigner Wolmar, Labour’s candidate for the seat where the party has historically trailed in third place, said he believed the Lib Dems vote was very soft and dependent on a single issue – despite the amount of literature they have produced. “I’m surprised there’s any trees left in Richmond Park, there’s forests of material, and they are pretty policy-free zones, and it starts to annoy people,” Wolmar said.

He said he was convinced Brexit would be the deciding factor. “If anything, I would say people are even more angry about it now than they were before. Zac has tried in various hustings to distance himself from Brexit, he points out he didn’t really campaign for it. But he clearly did, and people don’t like it.”

No Conservative candidate is standing against Goldsmith, and prominent Conservatives have campaigned for him, including Tania Mathias, Theresa Villiers and Jacob Rees-Mogg. The latter, perhaps unhelpfully for Goldsmith, recently hailed Heathrow expansion as a golden opportunity for post-Brexit business.

Neither the Green party nor Ukip have put up a candidate, endorsing Olney and Goldsmith respectively. Some of Goldsmith’s leaflets pictured him with Caroline Lucas, the Greens’ only MP, after the pair campaigned together on environmental issues, a tactic the Greens called “completely disingenuous”.

Lucas will go canvassing with the Lib Dems over the weekend, a further sign that politicians across the spectrum see the local poll as having national significance. “This is no normal byelection,” Lucas said. “A regressive alliance of the Tories and Ukip are working together to reinstall a pro-Brexit MP.

“The local Green party has stepped up at this unique moment and is backing Sarah Olney as the best hope of beating Zac Goldsmith and denting the government’s plans for a painful Brexit from the European Union.”