New Mexico’s green chile season is in full swing as the aroma of fresh roasted peppers permeates the air, but growers and exporters in Mexico are just as busy and that’s causing a crunch at the international border.

Authorities said Monday that agricultural inspectors with U.S. Customs and Border Protection have been processing dozens of chile imports daily at the port of entry in Columbus, New Mexico. They’re looking for any pests in the shipments that could affect domestic production in New Mexico, where green chile is a signature crop and a cultural icon.

“Chile is a huge crop for farmers in New Mexico so it is important that CBP agriculture specialists identify and stop any dangerous pests from making it into the state and potentially spreading,” acting Columbus Port Director Sam Jimenez said in a statement.

As part of “Operation Hot Chile,” Jimenez said agricultural inspectors are being assigned to Columbus from other locations to help with the increased traffic.

The inspectors will process around 100 chile shipments a day during the busiest part of the season. The Mexican import season is busiest between September and October, but can stretch as late as mid-December. Last year, they handled just under 11,000 shipments of red and green peppers from Mexico. 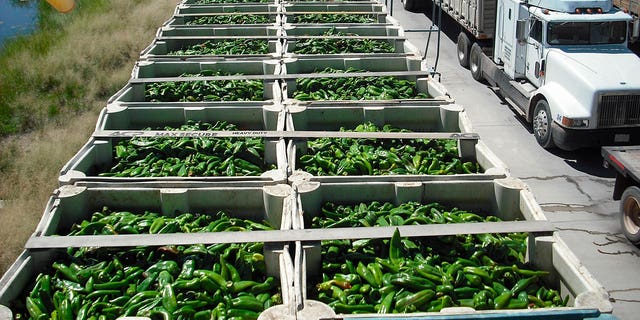 Pictured: A truckload of green chiles waiting to be inspected at Columbus, New Mexico. Border authorities said on Sept. 12, 2022, that they will be assigning more agricultural specialists to handle the increase in chile imports (US Customs and Border Protection via AP)

Imports have grown significantly each season, with inspectors seeing a nearly 25% jump since 2016. Officials are expecting continued growth this year.

Despite more imports, New Mexico farmers are seeing higher yields from their crops and the state’s reputation for growing what many have anointed as “the best green chile in the world” is expanding, said Travis Day, executive director of the New Mexico Chile Association.

The state’s chile harvest starts in late July, but gets cranking in August. Day spent Monday taste testing green chile cheeseburgers at the New Mexico State Fair while still recovering from the annual chile festival in Hatch, New Mexico, just a week ago where he talked to people from New York, Kansas and even Hawaii who flew in to get their fix.

“As an industry, we’re in a unique place where demand is the highest it’s ever been and it’s continuing to go up every year,” he said.

Yet, fewer acres of chile are being grown in New Mexico today due to labor pressures and dwindling irrigation supplies. While most commercial acreage is started from seed, some farmers have shifted back to transplanting seedlings to give their crops a jumpstart. Farmers are also working with engineers to develop a mechanical harvester.

So far this season, officials said New Mexico’s green chile harvest is more than 10 days ahead of schedule and experts are expecting between 55,000 and 60,000 tons of peppers to be harvested.

Stephanie Walker, a vegetable specialist at New Mexico State University, said growers in New Mexico have become adept at minimizing losses from disease issues spurred by heavy summer rains and that the yield from newer green chile varieties is increasing.

At the port of entry, all Mexican chile imports are subject to an X-ray scan. Then comes a physical inspection by a Customs and Border Protection specialist who searches for pests, diseases and any contaminated soil or noxious seeds.

If anything is found, digital images are sent to officials with the U.S. Department of Agriculture who determine whether the shipment can be released or returned.

In 2021, the inspections resulted in 25 cases where shipments had to be returned to Mexico.