Iran is getting ‘dangerously’ close to completing its nuclear weapons programme and will soon have a nuclear bomb in its arsenal, Israel’s prime minister has warned.

Naftali Bennett called on Britain and its Western allies to stand up to the Middle-Eastern country and to continue putting pressure on its nuclear efforts.

Tensions remain high across the wider Middle East over the accord’s collapse as U.S. sanctions and rising global food prices choke Iran’s ailing economy, putting further pressure on its government and its people.

Speaking to The Daily Telegraph this week, Bennett warned that Iran is ‘enriching uranium at an unprecedented rate and moving dangerously close to getting their hands on nuclear weapons.’

Non-proliferation experts warn Iran has enriched uranium at levels over 60 percent purity – a short technical step from weapons-grade levels of 90 percent – to make one nuclear weapon should it decide to do so. 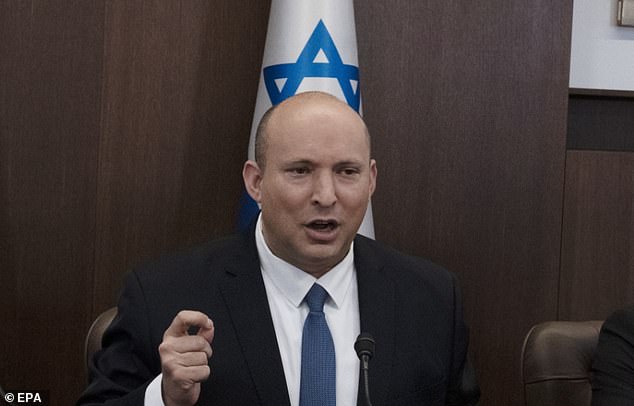 Iran is getting ‘dangerously’ close to completing its nuclear weapons programme and will soon have a nuclear bomb, Israel’s prime minister Naftali Bennett (pictured) has warned

Iran insists its nuclear enrichment program is for peaceful purposes, though U.N. experts and Western intelligence agencies say Iran had an organized military nuclear program through 2003.

Israel has threatened in the past that it would carry out a pre-emptive strike to stop Iran – and already is suspected in a series of recent killings targeting Iranian officials.

Bennet said the world must come together to challenge Iran over its programme.

‘Without pressure from the west, the Islamic regime in Iran could get their hands on a nuclear bomb very soon,’ he told The Telegraph.

‘The world must take a firm stance and tell the Islamic regime in Iran: no nukes, no sanctions. Iran’s nuclear program won’t stop until it’s stopped,’ he added.

One measure Israel has urged Britain to take is the implementation of a ‘tripwire’ mechanism that would hit Iran with greater sanctions should it take further steps towards building nuclear weapons.

Iran and world powers agreed in 2015 to the nuclear deal, which saw Tehran drastically limit its enrichment of uranium in exchange for the lifting of economic sanctions.

In 2018, then-President Donald Trump unilaterally withdrew America from the accord, raising tensions across the wider Middle East and sparking a series of attacks and incidents.

Talks in Vienna about reviving the deal have been on a ‘pause’ since March. Since the deal’s collapse, Iran has been running advanced centrifuges and rapidly growing stockpile of enriched uranium.

U.S. Secretary of State Antony Blinken said Thursday that America ‘remains committed to a mutual return’ to the nuclear deal, but only ‘if Iran drops its additional demands that are extraneous.’ That likely refers to Iran’s insistence its paramilitary Revolutionary Guard be delisted by the U.S. as a terror group.

On Wednesday, Bennett praised Wednesday’s IAEA board vote to censure Tehran as ‘a significant decision that exposes Iran’s true face.’

The ‘IAEA vote is a clear warning light to Iran: If Iran continues its activity, the leading countries must bring the matter back to the U.N. Security Council,’ said Bennett, who made an unannounced trip Thursday to the United Arab Emirates.

The crisis risks escalating further, however. 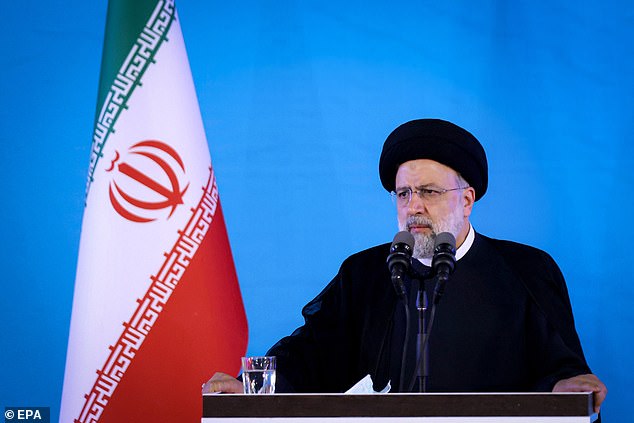 Non-proliferation experts warn Iran has enriched uranium at levels over 60 percent purity – a short technical step from weapons-grade levels of 90 percent – to make one nuclear weapon should it decide to do so. Pictured: Iranian president Ebrahim Raisi speaking on June 9

Bennett’s comments came after the head of the U.N. atomic watchdog said on Thursday that Iran has started removing 27 surveillance cameras from nuclear sites across the country. The U.N. warned this could deal a ‘fatal blow’ to the nuclear deal.

The development came a day after the International Atomic Energy Agency’s board of governors censured Tehran for failing to provide ‘credible information’ over manufactured nuclear material found at three undeclared sites in the country.

‘This, of course, poses a serious challenge to our ability to continue working there,’ warned Rafael Mariano Grossi, the IAEA’s director-general.

He added that if an agreement cannot be reached to restore the cameras in three to four weeks, ‘this would be a fatal blow’ to Iran’s nuclear deal.

Already, Grossi warned that without the cameras, Iran could make centrifuges and divert them to unknown locations.

‘When we lose this, then it’s anybody’s guess,’ he added.

Iran did not immediately acknowledge it was removing the 27 cameras, though it earlier threatened it could take more punitive steps. State media aired footage Thursday of workers disconnecting two IAEA cameras from power.

‘It is not acceptable that they show inappropriate behavior while Iran continues to cooperate,’ Behrouz Kamalvandi, an Iranian nuclear program spokesman, said Wednesday of the IAEA officials.

‘Do you assume that we withdraw because of resolutions?’ he asked. ‘In the name of God and in the name of the nation, Iran will not withdraw from its stance a single step.’

Grossi made the comments at a suddenly called news conference in Vienna, standing next to an example of the cameras installed across Iran. 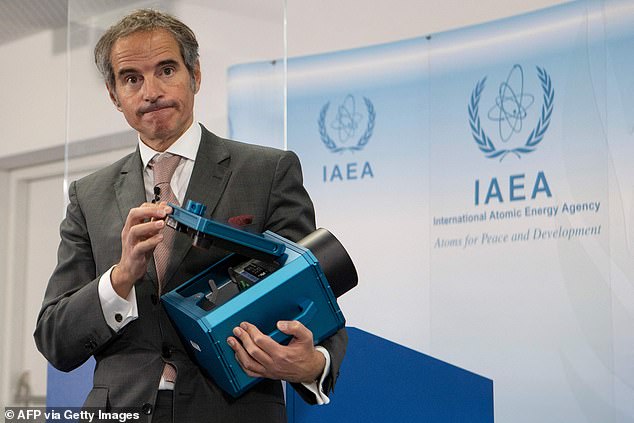 Iran will remove IAEA cameras from sites, including in Tehran, the underground Natanz nuclear enrichment facility, the facility in Isfahan and the Arak heavy water reactor in Khondab, he said.

‘Forty-something’ IAEA cameras would remain active in Iran, Grossi said, though Tehran already has been withholding IAEA footage since February 2021 as a pressure tactic to restore the atomic accord.

‘We are in a very tense situation with the negotiations on the revival of the (nuclear deal) at a low ebb,’ Grossi added. ‘Now we are adding this to the picture; so, as you can see, it’s not a very nice one.’

On Wednesday, Iran said it shut off two devices that the IAEA uses to monitor enrichment at Natanz. Grossi acknowledged that Thursday, saying that among the devices being removed was the Online Enrichment Monitor and flowmeter.

Those watch the enrichment of uranium gas through piping at enrichment facilities and allowed inspectors to remotely track its work.

Meanwhile, the IAEA earlier on Thursday said Iran informed the agency that it planned to install two new cascades of the IR-6 at Natanz. A cascade is a series of centrifuges hooked together to rapidly spin uranium gas to enrich it.

An IR-6 centrifuge spins uranium 10 times faster than the first-generation centrifuges that Iran was once limited to under its nuclear deal with world powers.

As of February, Iran already had been spinning a cascade of IR-6s at its underground facility at Fordo, according to the IAEA.

Iran earlier said it planned to install one cascade of IR-6s at Natanz. The IAEA said it ‘verified’ the ongoing installation of that cascade Monday, while the installing of the newly promised two other cascades had yet to begin.