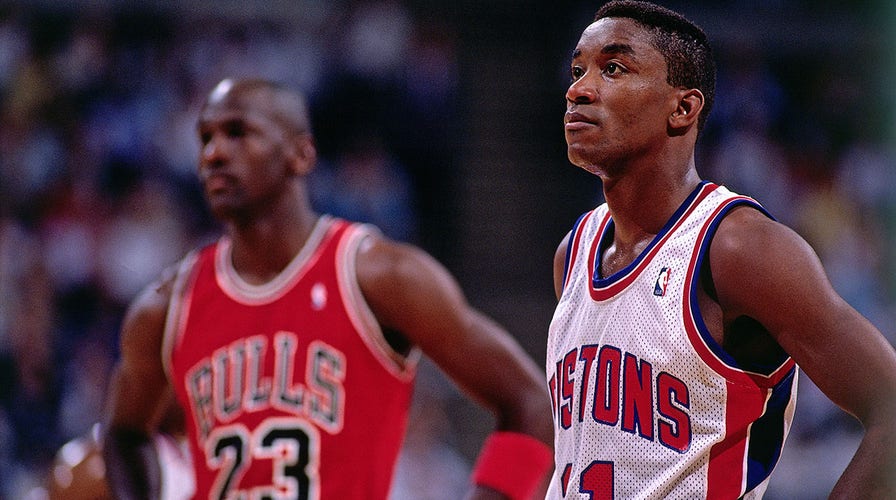 Isiah Thomas reignited his feud with Michael Jordan on Tuesday as he talked about how he was portrayed in 2020’s “The Last Dance” documentary.

One portion of the documentary talked about the Chicago Bulls’ rivalry with the Detroit Pistons and the “Bad Boys” era of their franchise. Thomas, Joe Dumars, Bill Laimbeer and Dennis Rodman were among those tasked to get under Jordan’s skin in the Eastern Conference playoffs. 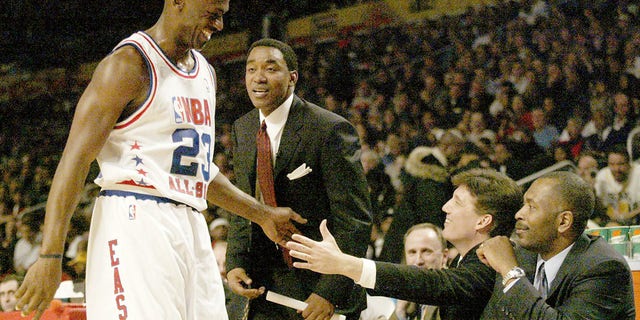 The Washington Wizards Michael Jordan, left, comes out of the game in the 52nd annual NBA All-Star game played in Atlanta, Feb. 9, 2003. This would be Jordan’s 14th and final NBA All-Star Game.
(REUTERS/Tami Chappell)

During one episode, Jordan and Thomas both spoke about the Pistons walking off the court early when the Bulls finally got past them. Both competitors appeared to still be stung by the entire situation. Even more than two years after the documentary aired, Thomas appeared to still be annoyed by how he was portrayed.

“When I was watching ‘The Last Dance,’ I’m (sitting) there and I’m watching it with my family and I’m thinking everything is good,” Thomas explained to Greece’s COSMOTE TV, via Eurohoops.

“And then this guy comes on television and he says that he hates me and then he calls me an a–hole. And then I proceed to watch a whole documentary about him being an a–hole. I’m like wait a minute, time out. Until I get a public apology, this beef is gonna go on for a long, long time, cause I’m from the west side of Chicago.” 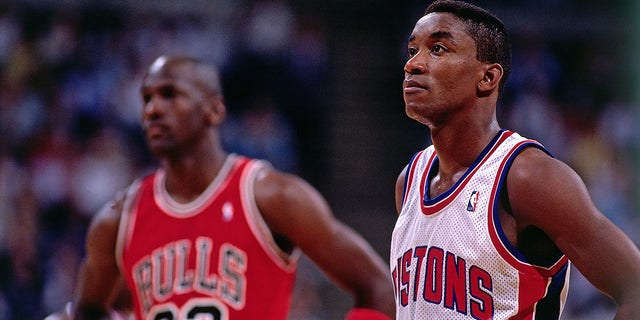 Isiah Thomas, #11 of the Detroit Pistons, takes some time to catch his breath with Michael Jordan, #23 of the Chicago Bulls, during a break in the action during an NBA game at The Palace circa 1989 in Auburn Hills, Michigan.
(Andrew D. Bernstein/NBAE via Getty Images)

In the documentary, Thomas defended the move, saying it was the same thing theBoston Celticsdid to them during the 1988 conference finals. He said he did not understand the outcry.

“To us, that was OK,” Thomas said. “Knowing what we know now and the aftermath that took place, I think all of us would have stopped and said congratulations like they do now.”

Thomas said it was different from today’s game.

“I mean, we would have did it. Of course, we would have done it,” he said of shaking hands after the game. “But during that period of time, that’s just not how [the mantle] was passed. When you lost, you left the floor. That’s it.” 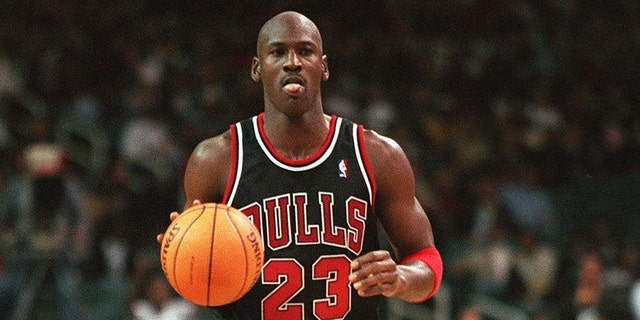 Michael Jordan with the Bulls during the 1997-98 season.
(Alexander Hassenstein/Bongarts/Getty Images)

Jordan was not thrilled with Thomas’ explanation in the episode. When he was shown what Thomas said, Jordan scoffed.

“Whatever he says now, you know it wasn’t his true actions then. He’s had time enough to think about it — or the reaction of the public that’s kind of changed his perspective of it. You can show me anything you want. There’s no way you’re going to convince me he wasn’t an a–hole,” he said.