At the ceremony, the first lady, students and administrators talked about what the school’s students went up against including addiction, homelessness, COVID losses and going to school while pregnant or having young children.

‘These stories, your stories of perseverance and resiliance are so inspiring,’ said the first lady, who continues to teach English at Northern Virginia Community College.

She spoke of three graduating students in her keynote address, including a pregnant woman who recently immigrated to the U.S. named Marie whose water broke during her final exam.

‘Now, we all know students who would ask to be excused from a test for a runny nose. But not Marie,’ Biden said. ‘Through her contractions – praying that her baby would stay put just a little bit longer -she finished her test and then later, delivered a healthy baby boy.’

‘That’s how much finishing her degree mattered to her,’ the first lady added.

Biden also spoke about a Marine Corps veteran named Steve, who didn’t let his PTSD define him, and was in the graduating class – and also a 46-year-old graphic designer named Ilya who got laid off during the pandemic, enrolled in LACC classes, and is now starting a second career as a teacher. 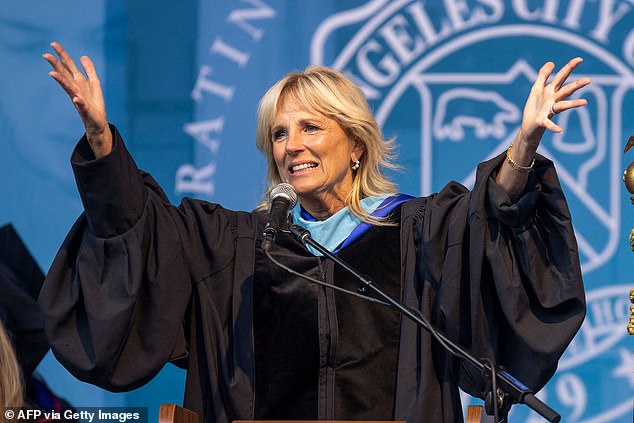 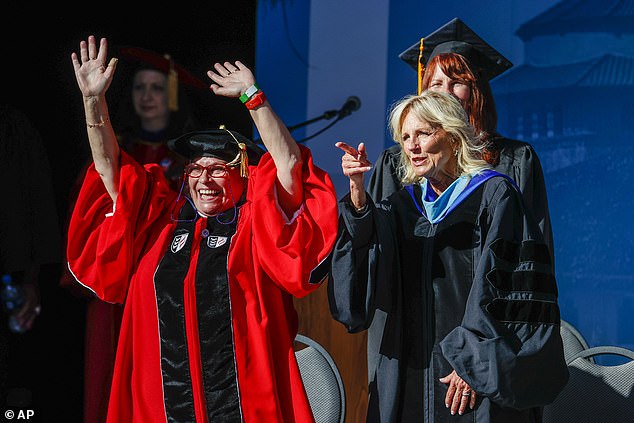 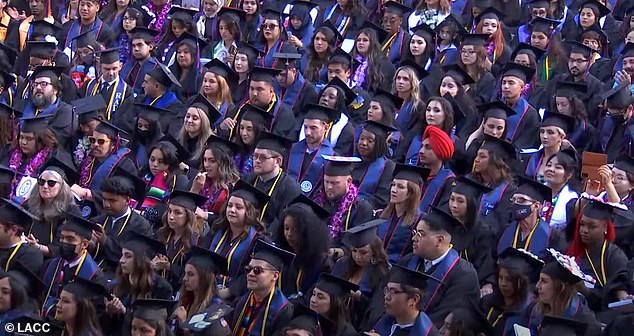 Graduates from the classes of 2020, 2021, 2022 from Los Angeles City College listen as First Lady Jill Biden gives a commencement address 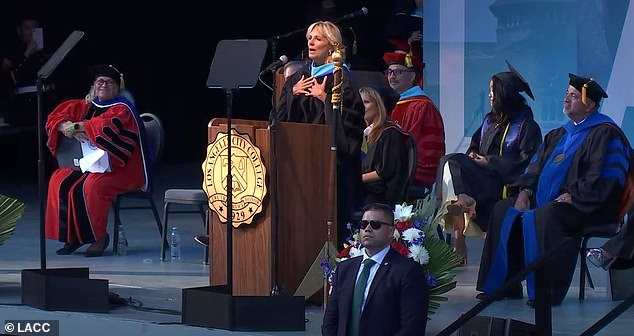 ‘These stories, your stories of perseverance and resiliance are so inspiring,’ said the first lady, who continues to teach English at Northern Virginia Community College 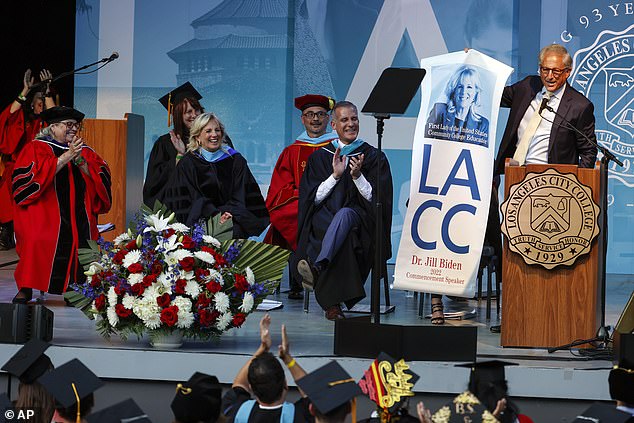 ‘She will start a new chapter and bring an old dream to life,’ Biden said.

Other student speakers spoke of the challenges they overcame to receive those associate degrees Tuesday night, at a ceremony at Los Angeles’ open-air Greek Theatre, situated on a hillside below Griffith Observatory.

‘I was a drunk, a university dropout, with literally zero future plans,’ remarked Stefanie Stone, 2022’s president of Associated Student Government. She said after dropping out of a four-year univesrity she ‘spiraled into a decade of depression, addiction and self-loathing.’

She told the audience she was marking nearly three years sober. She also told her fellow graduates that it’s OK not to have everything figured out.

‘If someone tells you they have it all figured out, run – they’re probably a cult leader,’ she joked.

Valedictorian Voleak Sip joked about how she and her peers had ‘transferred to Zoom university,’ during the advent of the COVID pandemic.

‘Suddenly my stress about getting a good grade was compounded with the existential threat of a global, societal downfall,’ she noted.

But she also talked seriously about the personal cost it had on her – losing both her mother and aunt to the disease.

‘That semester I happened to have three of the most compassionate professors a student could ask for,’ she said.

Sip is headed to UCLA next, to get a degree in psychology.

LACCD Board Member Andra Hoffman highlighted some of the struggles she knows students face.

‘I know that some of you are raising young children,’ she added. And had to battle unreliable internset service, she noted.

She joked that degrees from LACC are available to the ‘top 100 per cent of students who apply.’

‘Our doors are open to anybody who wants to benefit from our programs,’ she said.

Hoffman pointed out that graduates at the ceremony represented people ages 69 down to 16, and also included some who are DACA receipients and formerly incarcerated. 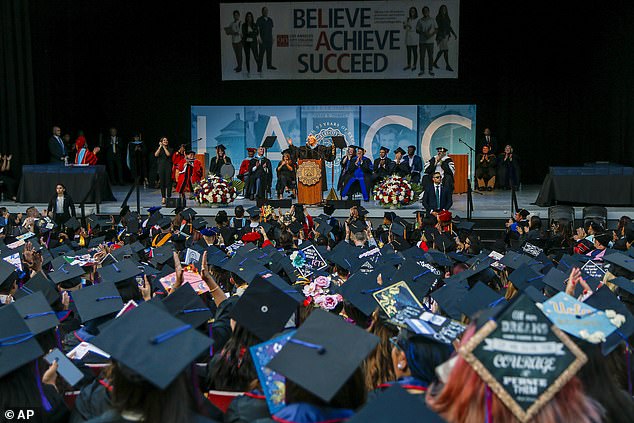 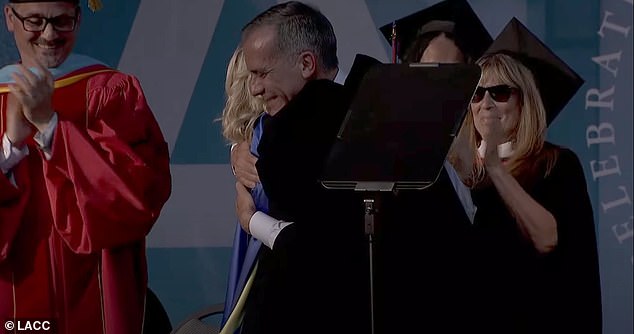 Dr. Jill Biden (left) gives a hug to Los Angeles Mayor Eric Garcetti (right), who was nominated by her husband to be ambassador to India, but his nomination got hung up in the U.S. Senate 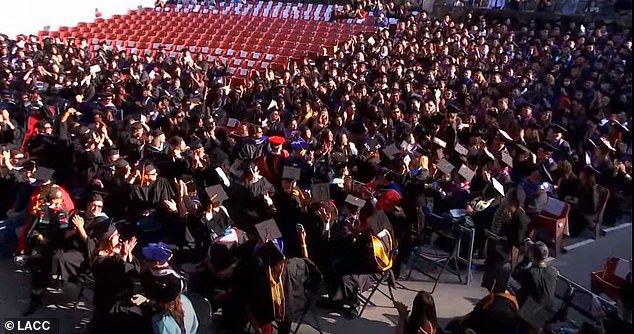 Graduates from the classes of 2020, 2021 and 2022 were celebrated Tuesday night, making up for no in-person graduation ceremonies during the pandemic

Graduates from the classes of 2020, 2021 and 2022 were celebrated Tuesday night, making up for no in-person graduation ceremonies during the pandemic.

School administrators marveled over the fact that Biden chose the East Hollywood-based community college to make a commencment speech.

‘Of all the colleges that our first lady could have chosen to be at for commencement, she picked us,’ said President of the Los Angeles City College Mary Gallagher.

But as second lady she partnered with Los Angeles Mayor Eric Garcetti – who was on hand Tuesday evening – for Los Angeles’ pilot program to give free tuition to those pursuing community college degrees.

Garcetti’s nomination for ambassador to India remains tied up in the U.S. Senate.

The first lady will also take part in Summit of the Americas events during this trip- with President Joe Biden flying into Los Angeles Wednesday for three days of meetings with leaders from North, Central and South America.