Joe Biden leads tributes to Congresswoman Jackie Walorski, 58, after she was killed in horror car crash when woman veered into oncoming traffic and hit her head-on: President orders flags be flown at half-staff across Washington DC in her honor

Joe Biden has led emotional tributes to Congresswoman Jackie Walorski after she was killed in a horrific head-on car crash in Indiana.

The President said he was ‘shocked and saddened’ by the Republican’s passing when a car crossed the road and veered into oncoming traffic in Elkhart County on Wednesday.

He said the 58-year-old had ‘spent a lifetime serving the community she grew up in’ and ordered flags across Washington DC be flown at half mast in her honor.

Biden, in a joint statement with his wife Jill, also remembered the ‘the daughter of a meat-cutter and firefighter’ who worked as a journalist, missionary and nonprofit director before gracing the halls of power.

Meanwhile republicans including Mike Pence and Steve Scalise also remembered ‘a dear friend who loved serving the people of Indiana’ before her life was brutally cut short.’

Walorski was killed in a horrific head-on smash when senior care aide Edith Schmucker’s car veered across the center line of a highway around 12.30pm.

The congresswoman, her two aides – Emma Thomson, 28, and Zachery Potts, 27 – and Schmucker, 56, died as a result of injuries sustained during crash.

The accident occurred as Walorski and her team made their way back from Warsaw after looking into the medical device industry. She is the fifth House member to die while in office this year and the third Republican – after Reps. Don Young, Alaska, and Jim Hagedorn, Minn. 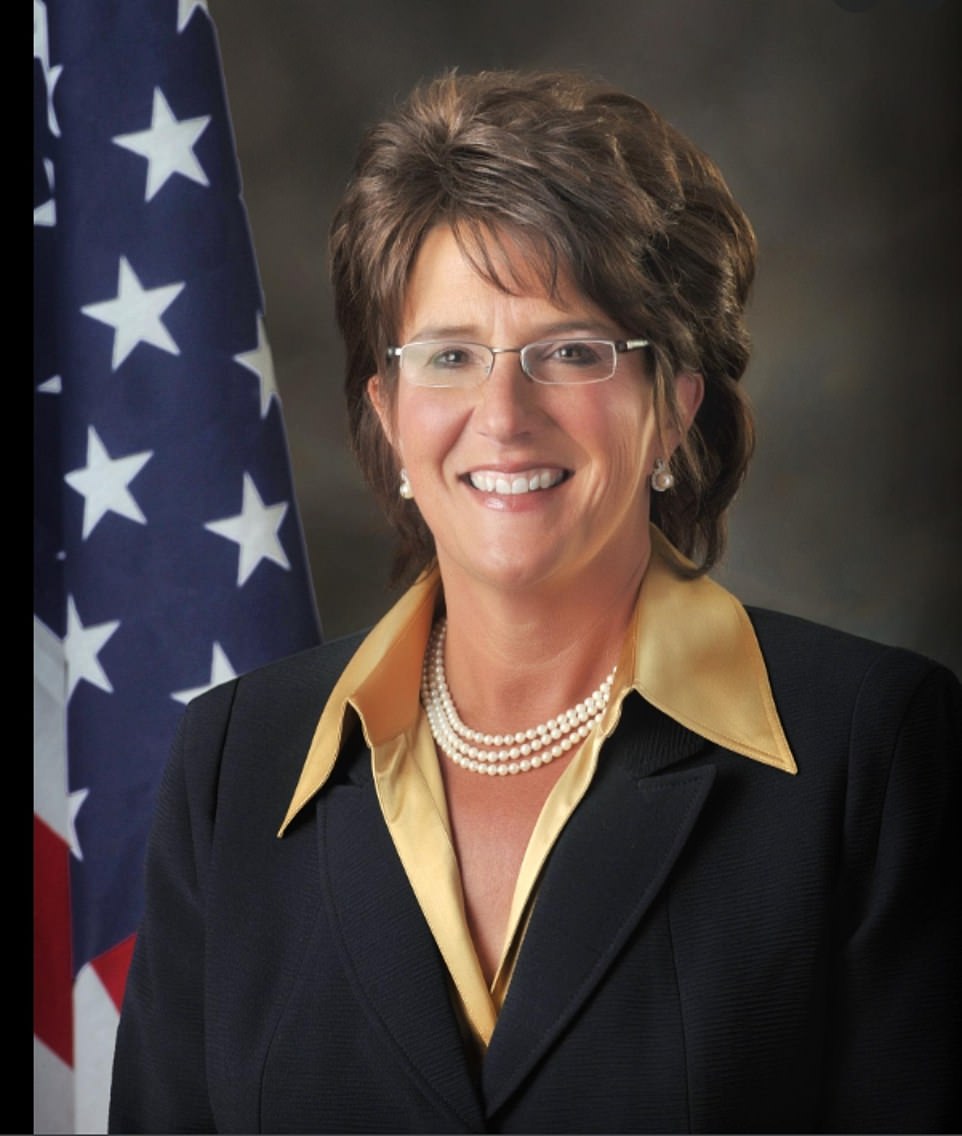 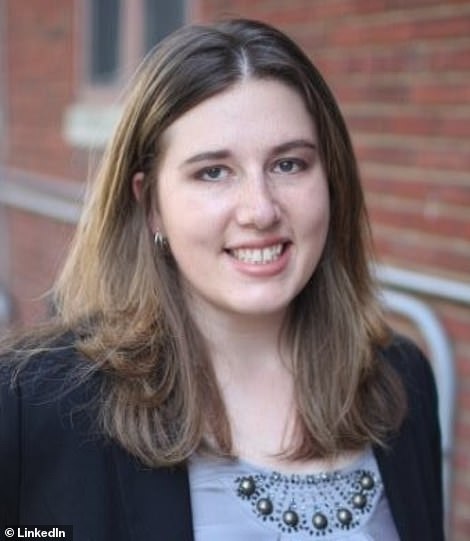 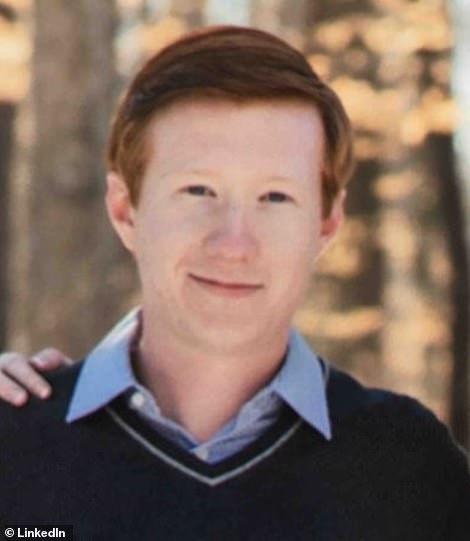 Two of the congresswoman’s aides – Emma Thomson, 28, (left) and Zachery Potts, 27 (right) – were also killed in the crash 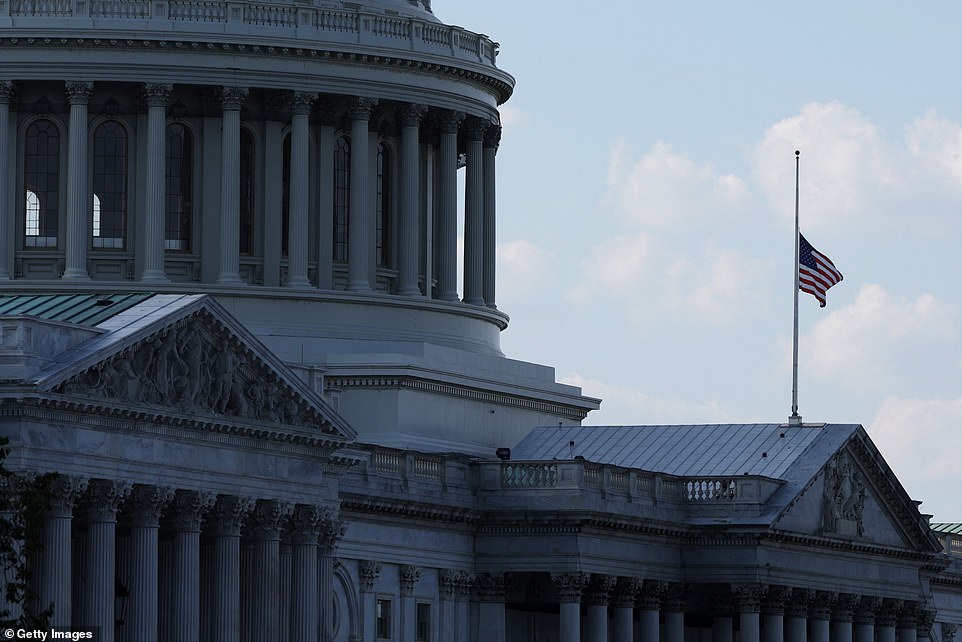 U.S. flag flies at half staff over the Capitol after Walorski’s death 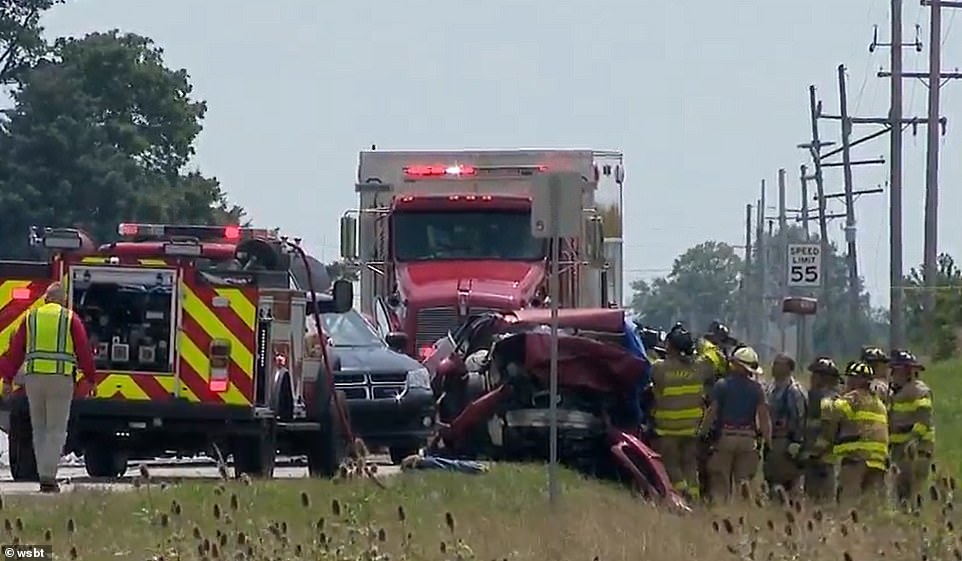 The collision happened around 12:30 p.m. on Wednesday 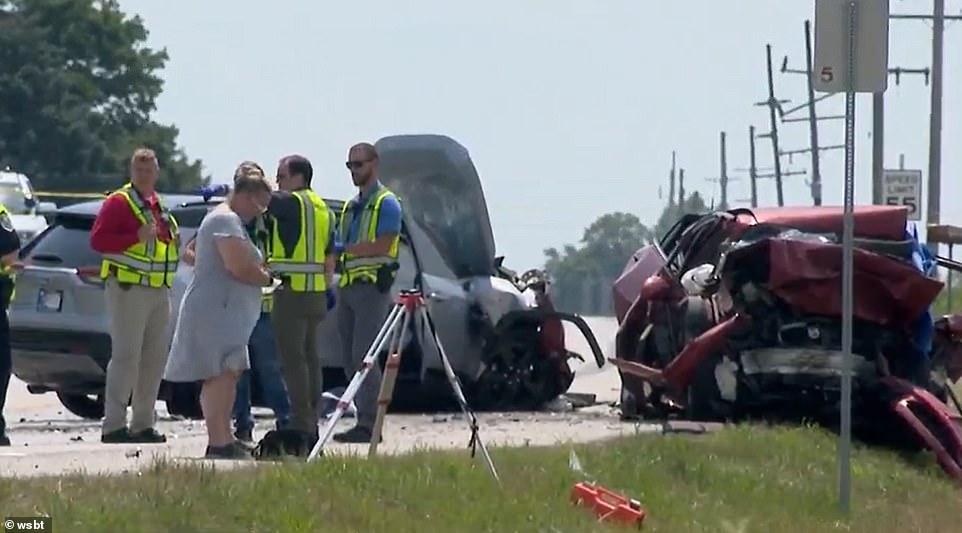 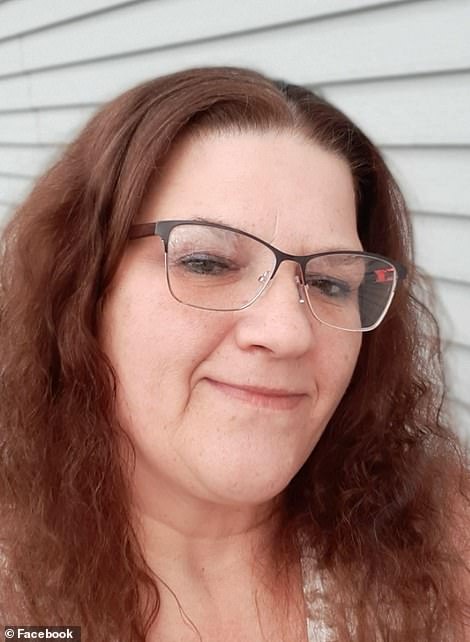 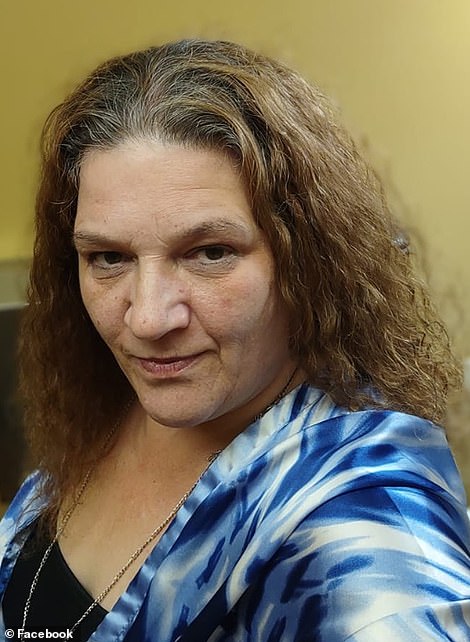 The driver of the northbound car, Edith Schmucker, 56, was also killed

The life of Jackie Walorski: Her journey from TV anchor to missionary to congresswoman

Born in 1963 in South Bend, Indiana, Walorski was the daughter of a meat cutter and a fireman. She began her career as a TV news reporter in South Bend, before becoming executive director of the local humane society in 1989.

She then held a position at Ancilla College before taking a job with the local Chamber of Commerce.

Walorski and her husband Dean lived and worked as missionaries in Romania from 2000-2004, where the started a foundation to provide aid to children.

Walorski spent five years in the Indiana State House where she sponsored the state’s voter ID law that was later challenged and upheld by the Supreme Court.

Walorski joined the U.S. House in 2010 where she serves as ranking member on the Ethics Committee. A staunch conservative, she voted against Donald Trump’s second impeachment and in favor of objecting to the 2020 election results.

Walorski and her husband Dean resided in Jimtown, Indiana and were members of South Gate Church, an Assembly of God megachurch in South Bend.

President Biden offered his condolences to Walorski’s loved ones Wednesday in a lengthy statement honoring her ‘lifelong career serving her community.’

‘Jill and I are shocked and saddened by the death of Congresswoman Jackie Walorski of Indiana along with two members of her staff in a car accident today in Indiana,’ he wrote.

‘Born in her beloved South Bend as the daughter of a meat-cutter and firefighter, she spent a lifetime serving the community that she grew up in – as a journalist, a nonprofit director, a state legislator, and eventually as a Member of Congress for the past nine and half years.’

Biden pointed out that although he and Walorski ‘disagreed on many issues’ she was ‘respected by members of both parties for her work on the House Ways and Means Committee on which she served.’

He specifically thanked her for her work on the House Hunger Caucus and contributions to planning the first White House Conference on Hunger, Nutrition, and Health held in 50 years.

‘We send our deepest condolences to her husband, Dean, to the families of her staff members, Zachery Potts and Emma Thomson, who lost their lives in public service, and to the people of Indiana’s Second District who lost a representative who was one of their own,’ the president concluded.

House Speaker Nancy Pelosi ordered flags at the Capitol to be flown at half staff to commemorate Walorski and the White House followed suit.

Lawmakers on both side of the aisle chimed in the pay their respects to Walorski and her staffers.

‘Today, we lost one of our greatest members,’ the Republican Study Committee said in a statement.

‘Jackie Walorski lived a life of public service and was a friend to all who knew her.’

GOP Leader Kevin McCarthy said in a statement after the crash: ‘This news is absolutely devastating. Jackie was a dear friend, trusted advisor, and the embodiment of integrity.’

‘When there was a vacancy for Republican leader of the Ethics Committee, she was my first call. Everyone who knew Jackie knows she was tough, but fair – a no nonsense, straight shooter.’

‘We worked together very closely, and I was privileged to know her for many years. May the families and loved ones of Jackie, Emma, and Zachery find comfort during this tragic time,’ Trump wrote on his social media platform, Truth social. ‘They will be greatly missed!’

‘@KarenPence and I are heartbroken by the tragic passing of our dear friend Rep. Jackie Walorski. She served Indiana in the Statehouse and the Congress with integrity and principle for nearly two decades and will be deeply missed,’ former Vice President Mike Pence tweeted. 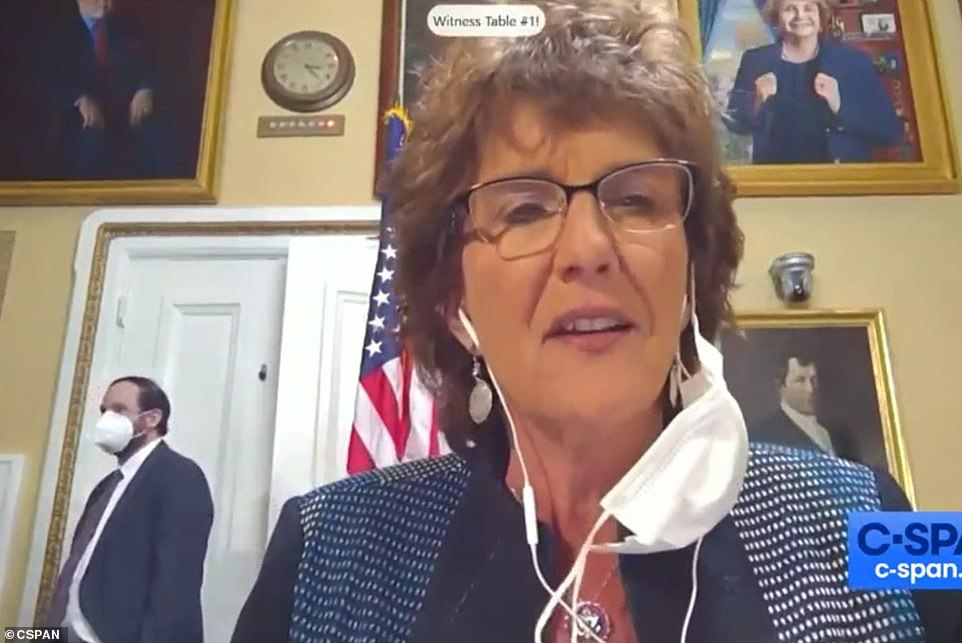 Walorski, 58, and her two aides were driving southbound in Elkhart County, Indiana when a northbound vehicle crossed over the line and collided with their vehicle head-on 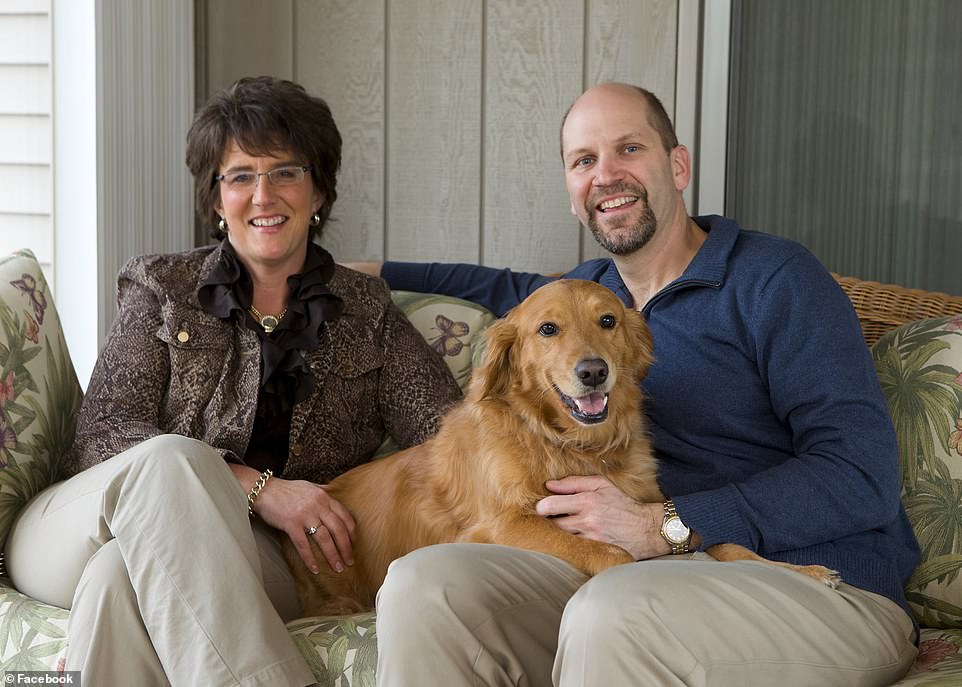 Walorski is pictured with her husband Dean and their dog 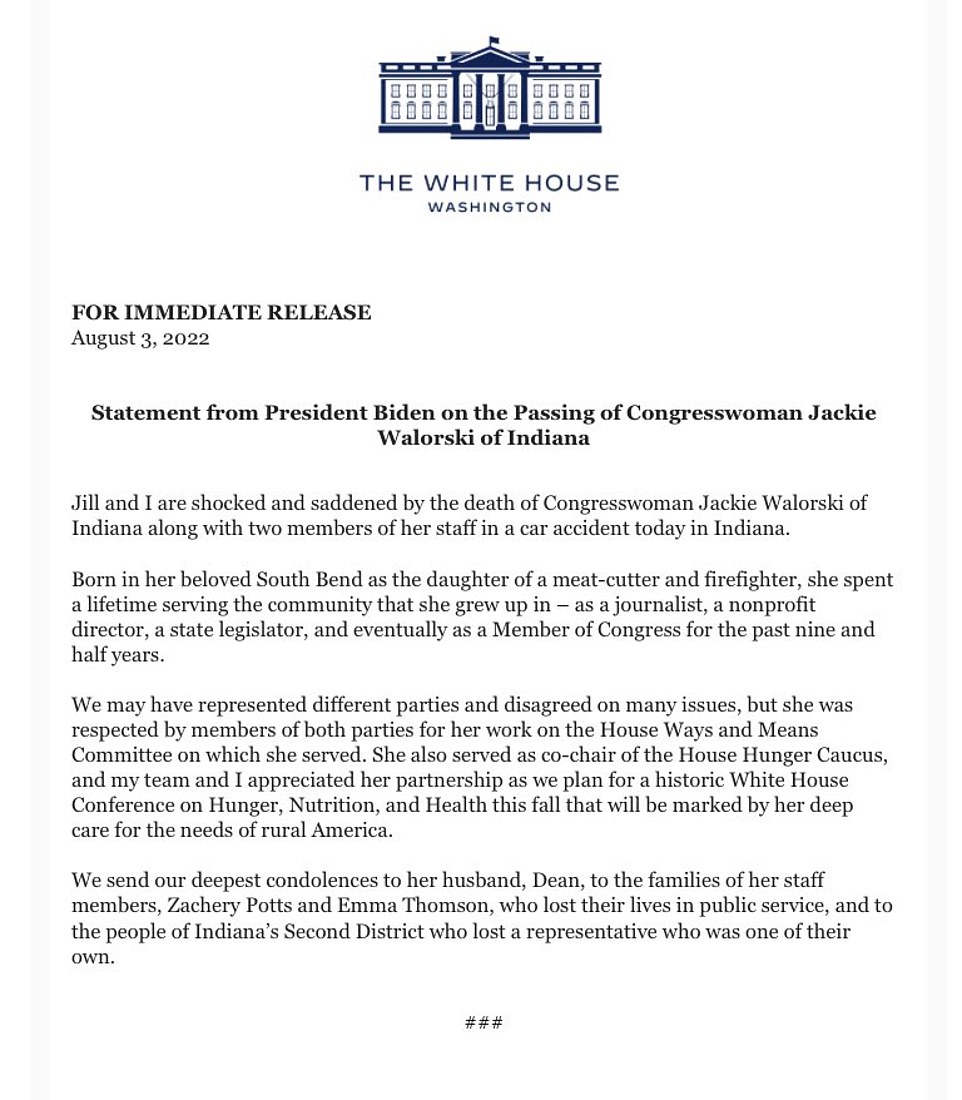 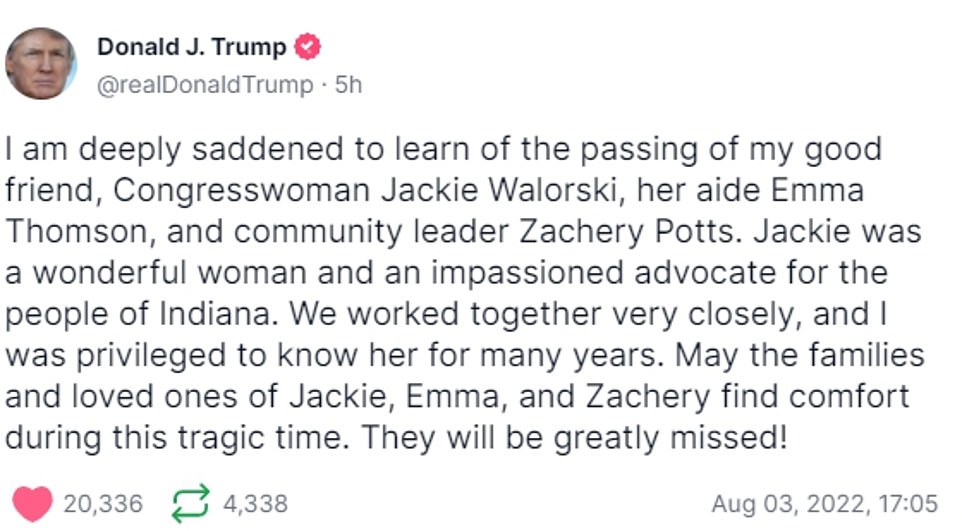 ‘She was a devout Christian, a passionate advocate for life, and a leader among Hoosier representatives. Everything Jackie did was to serve others,’ Banks penned in a heartfelt Facebook post. ‘She had a heart of gold, and I will miss her dearly.’

He added: ‘My heart is broken for Dean, the Walorski family, and all who knew and loved my friend Jackie.’

Rep. Victoria Spartz said she was mourning the loss of ‘good friend and a strong fighter for our country and our freedoms.’ She added: ‘She will be missed dearly.’

Walorski and her staffers were in Warsaw, Indiana earlier Wednesday visiting Medartis Headquarters.

Warsaw Mayor Joe Thallemer, who was one of the last people to speak with the lawmaker, claims she was in town to learn more about recent successes in the medical device industry.

‘We just had a really good time together discussing issues as they relate again to our community,’ Thallemer told WSBT.

He said he has taken the deaths of Walorski and her staff very hard.

‘I feel saddened the way the day turned out. There’s really nothing to say other than that feeling you get when something like that is all of a sudden reality.’

Walorski’s office put out a statement after the crash: ‘Dean Swihart, Jackie’s husband, was just informed by the Elkhart County Sheriff’s office that Jackie was killed in a car crash this afternoon. She has returned to be with her Lord and Savior, Jesus Christ. Please keep her family in your thoughts and prayers. We will have no further comment at this time.’

She represented Indiana’s 2nd district since 2013 and was the highest ranking Republican on the House Ethics Committee.

Walorski started off her career as a TV news reporter and she and her husband spent four years as missionaries in Romania, where they started a foundation to offer food and medical supplies to impoverished youth.  She also spent five years in the Indiana state house.

Thomson, a native of Johnstown, Pa., had previously worked as a communications director for Reps. John Joyce, R-Pa., and Michael Burgess, R-Texas, and as a campaign manager for Joyce. She also worked on Marco Rubio’s 2016 campaign.

Potts, in addition to chairing the St. Joseph GOP, worked a district director for Walorski. He graduated from Indiana University in 2017.

‘Today Emma Thomson who did an amazing job on my 2016 Presidential campaign lost her life in an auto accident in Indiana She was a smart & talented communicator and an amazing young woman Jeanette & I send our deepest condolences to her family May she rest in eternal peace,’ Rubio tweeted after the crash.

‘For two years I had the privilege and honor to work with Emma Thomson. Emma’s intelligence, creativity, drive, determination and humor were second-to-none,’ Joyce said in a statement of condolence. 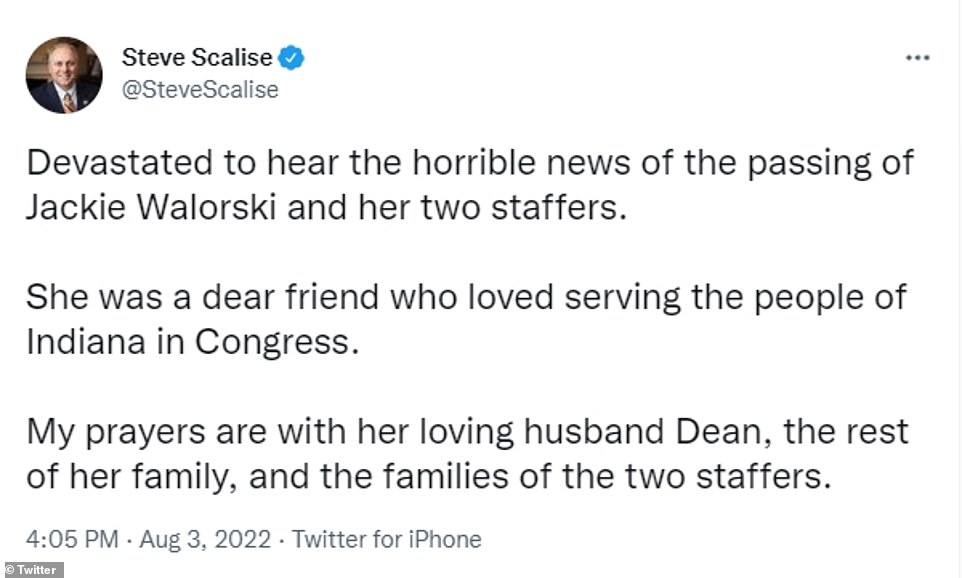 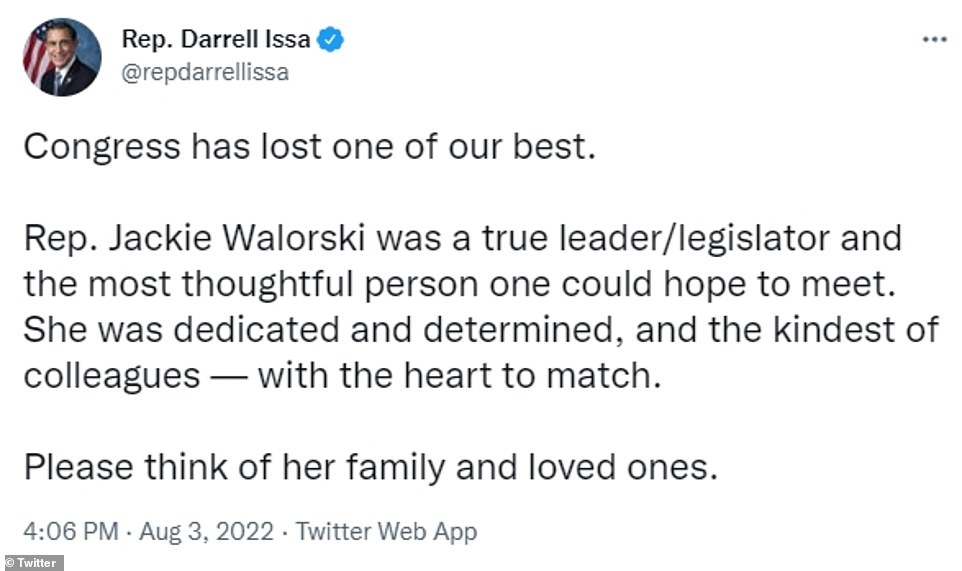 Schmucker worked at a nursing home and lived in Nappanee, Indiana, according to her Facebook profile.

‘Please pray for my family. Edith Schmucker is my aunt. She was like a second mom to me. She would do anything for anyone,’ Schmucker’s niece Erica Miller wrote on Facebook.

‘Please say a prayer for my family as we all try to get through this. I will never forget all the things I learned from you as a kid and how you always would run your fingers through my hair every time you saw me and tell me how much you loved me. Until we meet again, I love you RIP Aunt Edith Schmucker I hope you have the best time with grams and gramps up there!,’ another of Schmucker’s nieces Tamra Schmucker wrote on Facebook.

‘My heart is heavy, and i don’t have the words. But all I can say is prayers for her family. She was a good and honorable public servant,’ Rep. Adam Kinzinger wrote on Twitter.

‘I’m shocked and saddened to hear of the tragic death of Congresswoman Jackie Walorski. My thoughts and prayers are with her family and the other victims of this terrible crash,’ Transportation Sec. Pete Buttigieg, former mayor Walorski’s hometown South Bend, tweeted after the crash.