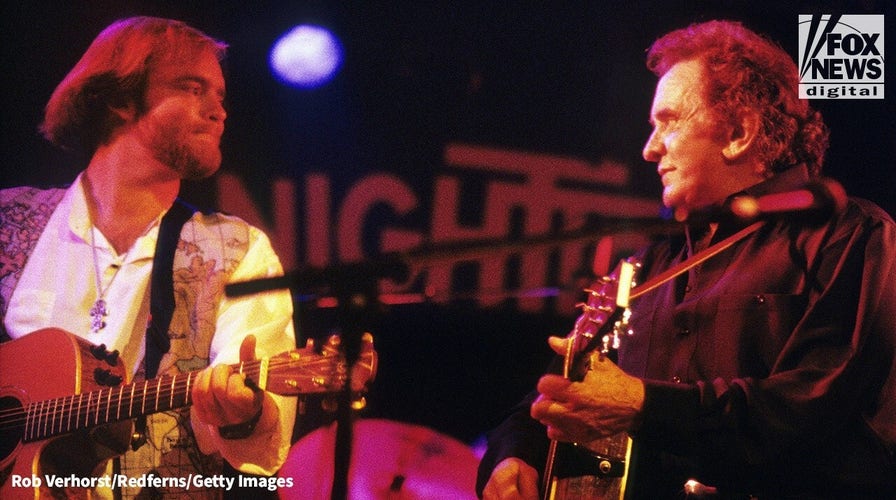 John Carter Cash, the only son of the "Man in Black" and June Carter Cash, has spoken out in a new doc titled "Johnny Cash: The Redemption of an American Icon."

John Carter Cash, the only son of Johnny Cash and June Carter, says the “Man in Black” was his greatest supporter as they both relied on God to overcome their personal struggles.

The singer/songwriter, along with his aunt Joanne Cash, have come forward in a new documentary about the music legend titled “Johnny Cash: The Redemption of an American Icon.” It explores the late artist’s deep devotion to his faith and how his love of God played a role in his life as he faced depression and a crippling drug addiction.

The film features never-before-heard conversations with Cash himself as he reflected on his personal journey. Cash passed away in 2003 at age 71, less than four months after his wife. 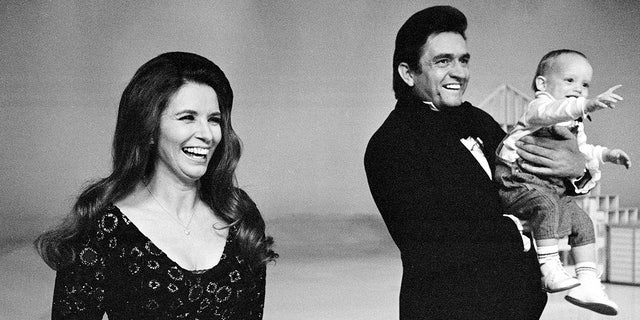 June Carter Cash, Johnny Cash and their son, John Carter Cash on "The Jim Nabors Hour" on March 5, 1971. Carter Cash, now 52, has spoken out in a new documentary about his father’s faith titled "Johnny Cash: The Redemption of an American Icon".
(Photo by CBS via Getty Images)

“He was my best friend,” the 52-year-old told Fox News Digital. “He really was. We laughed together. We traveled together. He was supportive of me. He was lenient on me, maybe a little too much. I think he could have been a little bit tougher. I think I needed it sometimes. But my father never held a record of wrong. And we forgave each other and we healed. And together, we went through the struggles that we had to heal [from].”

JOHNNY CASH’S SISTER SAYS THE ‘MAN IN BLACK’ GAVE ‘HIS HEART BACK’ TO GOD BEFORE HIS DEATH: ‘THERE IS HOPE’

“It’s amazing that I don’t think people realize how much they still carry around with them. But I feel that within our relationship and within our lifetime together, we got as close as we could to finding a peaceful place. And moving on as father and son, and as friends… that was just as important as anything. We had to be friends also. And that’s what mattered. That’s what endured. We had fun together, you know? And so, those are the times I remember.” 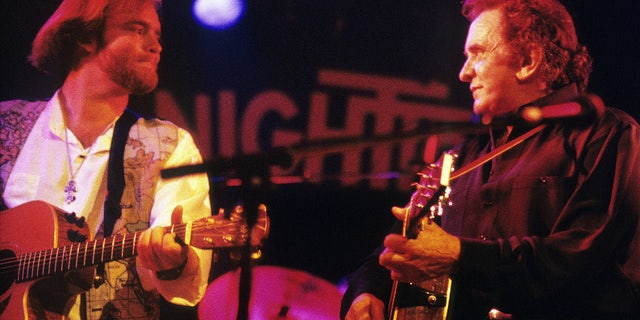 Johnny Cash performing on stage with his son John Carter Cash, left, at the Nighttown in Rotterdam, Netherlands on June 30, 1994.
(Photo by Rob Verhorst/Redferns)

Early in his career, Cash took massive quantities of pills to deal with the rigors of touring and other personal demons, Reuters reported. While he cleaned up with June’s guidance, the star relapsed towards the end of the ‘70s. Carter Cash previously described how the patriarch faced near-death experiences, rehab stints and interventions in his 2007 book, “Anchored in Love: The Life and Legacy of June Carter Cash”.

“When you look at the idea of redemption, if you were to look that up in the dictionary, it would say Johnny Cash,” executive producer Andy Irwin told Fox News Digital. “I think this is one of those stories that everybody loves. Johnny Cash is a household name, but I don’t think people know the depth of his roots and faith and the rest of his story. [For many] it ended at the end of the credits of the [2005] movie ‘Walk the Line.’ And I didn’t realize there was so much more to the story.”

Joanne previously told Fox News Digital Cash became a born-again Christian in 1972 in the same church “where I had given my heart to the Lord.” Joanne said she recommitted to her faith in 1970 after she faced her own struggles. Since then, she has become “free of drugs and alcohol.”

“A lot of people will focus on the darkness and the struggles and all this,” Carter Cash noted. “Especially children of entertainers, they don’t know who they are. They can’t find their own identity… But through my own journey, I’ve found who I am. I know who I am and I’m grateful for that. And so, I try not to focus on the darkness… or look back past that healing and go, ‘I remember it. Maybe that’s where this pain came from.’ I can look at it without finding resentment anew. And so, that’s really what it’s about. I focus on the light. I try not to look back at the dark.” 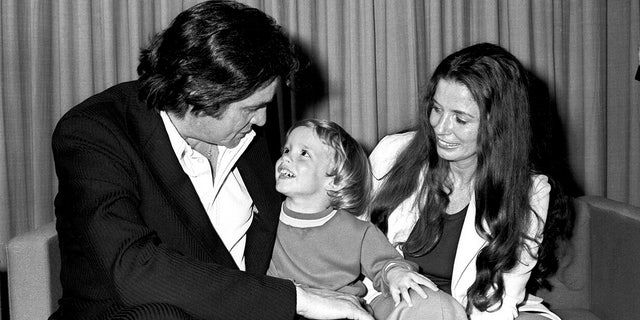 John Carter Cash, center, described his father Johnny Cash as a devoted family man who wanted to pass on the teachings of the Bible to his family.
(Photo by Kevin Berry/Fairfax Media via Getty Images)

Carter Cash described his father as a devoted family man, one who was not perfect and heavily relied on his faith to cope with tough times.

“He had so many losses in his life – the loss of his brother, loss of my mother before he passed away,” Carter Cash explained. “[But] he never, like Job, cursed God. I want people to know when they watch this [documentary], that no matter what they go through, God is not against them. God is supportive. God is behind them… My dad had a great wisdom and understanding of that… What God does is helps us carry our burdens of this mortal plane, of this thin fabric of our existence. It’s love that helps.”

Carter Cash pointed out that just like with his music, Cash was outspoken about his Christian faith at home. 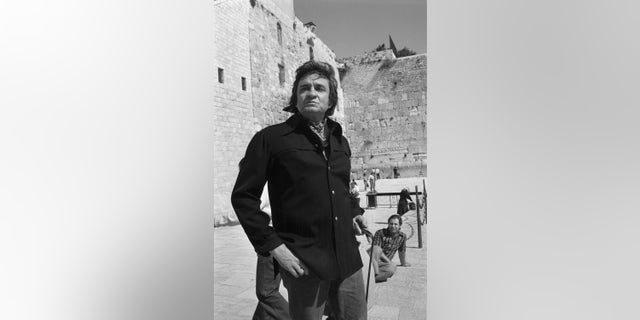 Johnny Cash is seen here in Israel circa 1977 during the filming of a Christmas special.
(Getty Images)

“He was always consistent about professing his faith,” Carter Cash explained. “It stems from family values. It stems from his love for gospel music. It stems from the fact that he needed salvation and he found it [by] bringing it to other people also. When he signed up to record with [record producer] Rick Rubin, one of the most important things to him was that he had a gospel project. Christianity was something that he was never ashamed of. He always put that out in the forefront. It was a huge part of who he was. It made up who he was.”

As a child, Cash grew up in the church and was deeply influenced by his mother’s devotion to God. He would later record “My Mother’s Hymn Book,” which was based on the matriarch’s teachings.

It was 1956 when Sun Records released Cash’s biggest hit and signature song, “I Walk the Line,” the New York Times reported. By the summer of 1958, he had written more than 50 songs and sold more than six million records. However, the label balked at the idea of Cash recording gospel music. According to the outlet, this prompted Cash to move to Columbia Records, where he remained for the next 28 years. 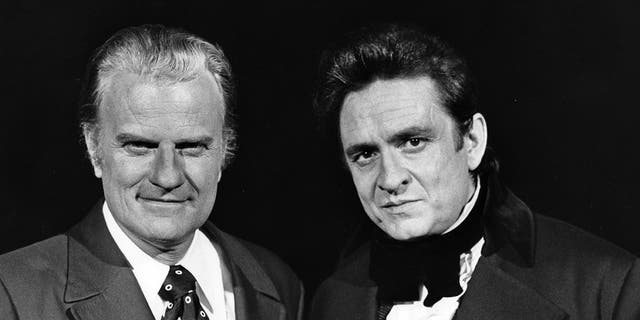 Throughout his career, Cash recorded several religious albums. In 1971, he and June traveled to Israel to work on the film “The Gospel Road.” The movie was later acquired by Rev. Billy Graham’s film company.

JOHNNY CASH IS KING IN NASHVILLE: HIS TUNES, LEGACY AND LEGEND RULE THE MUSIC CITY

“[Faith] was always important to him,” said Carter Cash. “When he had the live television show, he would sing songs of spirituality…. [He was] a man of faith… Yes, he fell short, but he got back up again. This is the documentary he would want to be made about his life because this puts faith first… He wasn’t afraid to tell people, ‘I’ve fallen short,’ or ‘This is who I am, and these are the struggles that I’ve had.’ He was willing to admit to his shortcomings. And I think that’s a good example to live by.”

Today, the proud father of five is determined to keep the beloved patriarch’s legacy alive. He wants to continue sharing the story of Cash’s devotion not only with his own family but with the world too. 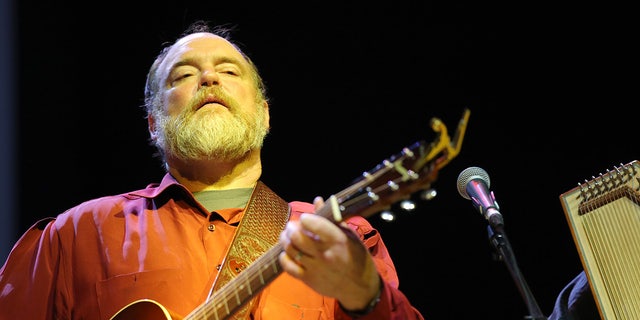 “I’m always learning more about my dad on a regular basis,” said Carter Cash. “I look at his writings and I feel like he’s still speaking to me… He was a Biblical scholar. There are hundreds of pages I have of his Biblical studies and those things are so important to me. They really are.”

“When Larry King asked my dad what he wanted the most out of his legacy, what he wanted to be remembered the most for, my dad said, ‘As a good father.’ And in that, he’s successful. I always remember him for that. And so, let his words speak for themselves.”

"Johnny Cash: The Redemption of an American Icon" is playing exclusively in theaters Dec. 5-7.