Johnny Depp left his libel trial against ex-wife Amber Heard and jetted to England where he surprised concertgoers by performing with Jeff Beck at the guitar legend’s show on Sunday.

After the show, the Hollywood star met fans outside the venue, posing for photos and signing autographs.

An Instagram user who caught a shot of the Pirates of the Caribbean star wrote: ‘Wasn’t expecting this… I thought he was in court but turns out he’s in Sheffield with Jeff Beck.’

‘JOHNNY SINGING ISOLATION OMG’ exclaimed a Twitter user who caught a quick video of the performance.

The song, released officially by the pair in 2020, has recently gained notoriety due to the publicity from the trial.

The duo also performed covers of Marvin Gaye’s ‘What’s Going On’ and Jimi Hendrix’s ‘Little Wing,’ according to The Hollywood Reporter.

‘Mr. Depp is in the United Kingdom, as he was a few weeks ago, to adhere to his previously scheduled work obligations,’ a source close to Depp told CourtTV.

Depp and Beck, 77, frequently recorded together during lockdown in the initial wave of the Covid-19 pandemic.

He plays guitar in a band with Alice Cooper and Aerosmith’s Joe Perry called the Hollywood Vampires. 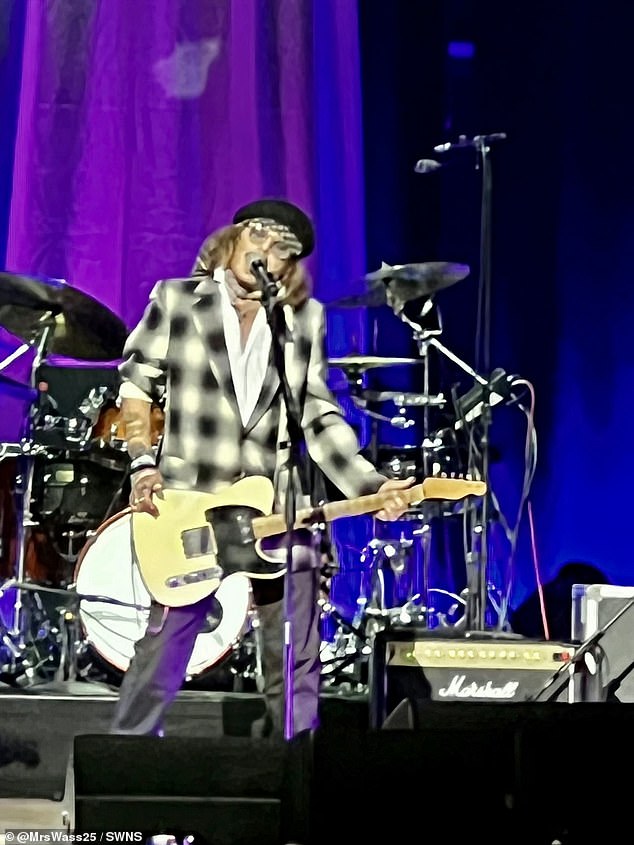 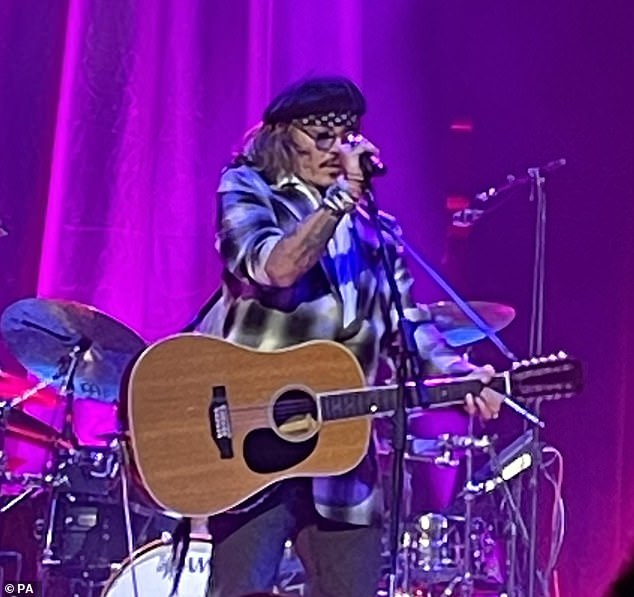 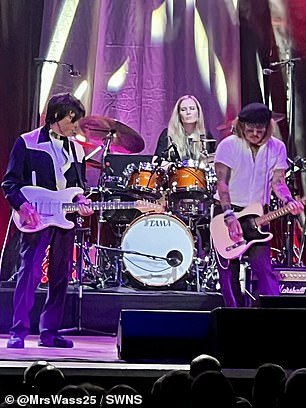 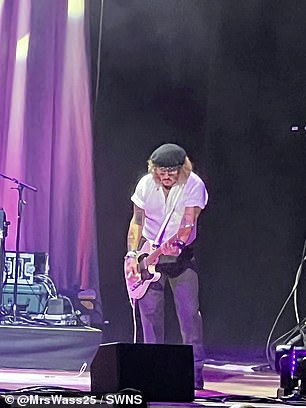 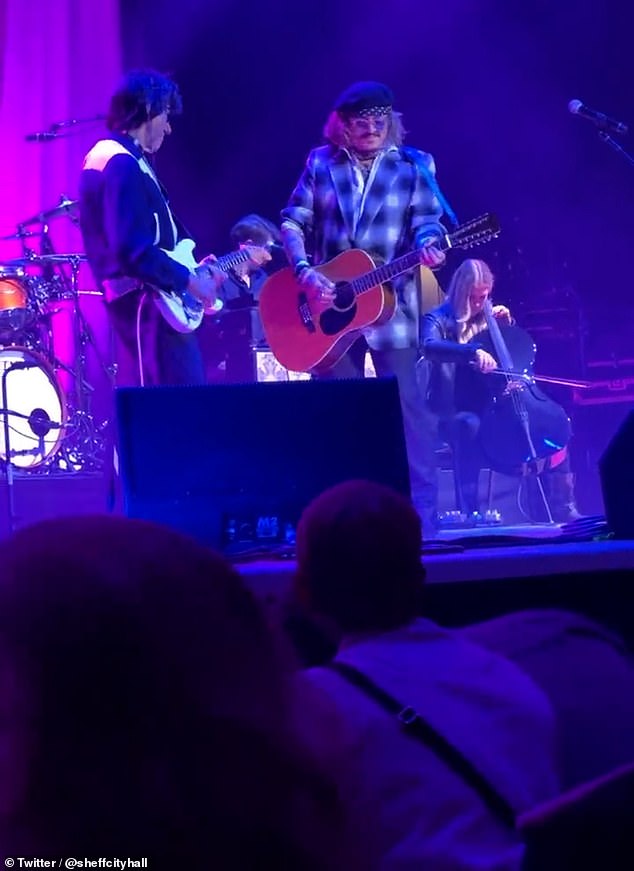 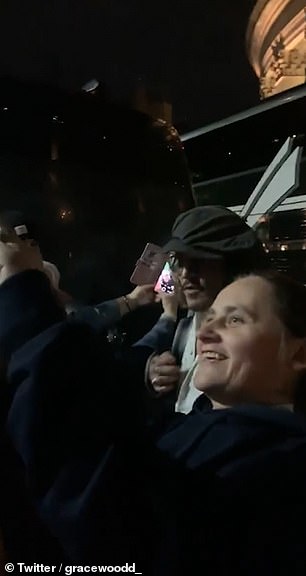 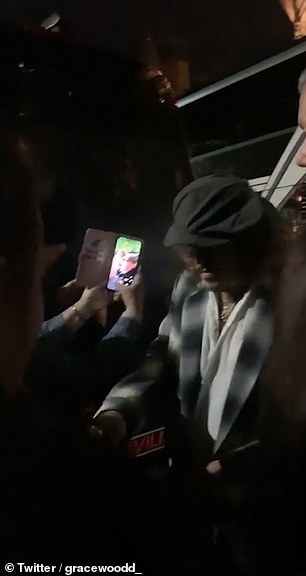 After the show, the Hollywood star met fans outside the venue, posing for photos and signing autographs 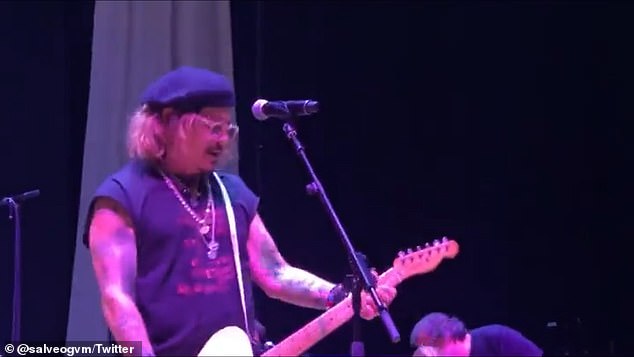 Depp took a break from his libel trial against ex-wife Amber Heard to rock with sometime collaborator Jeff Beck at the longtime pop star’s concert in Sheffield, England on Sunday

While the jury continues deliberations Tuesday due to the Memorial Day holiday, Depp spent Sunday night onstage with Beck performing a cover of John Lennon’s ‘Isolation’ 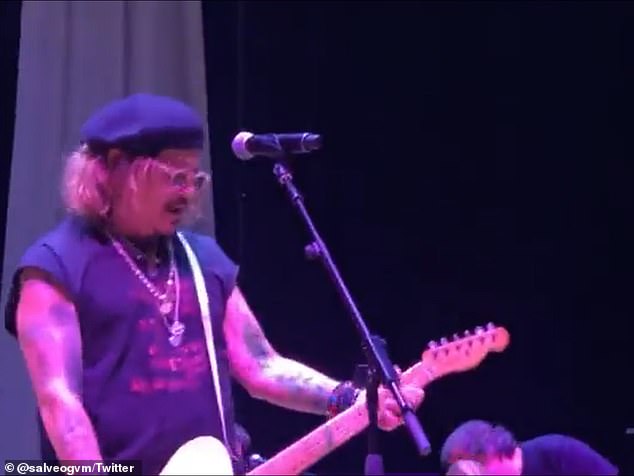 The song, released officially by the pair in 2020, has recently entered the charts due to the publicity from the trial 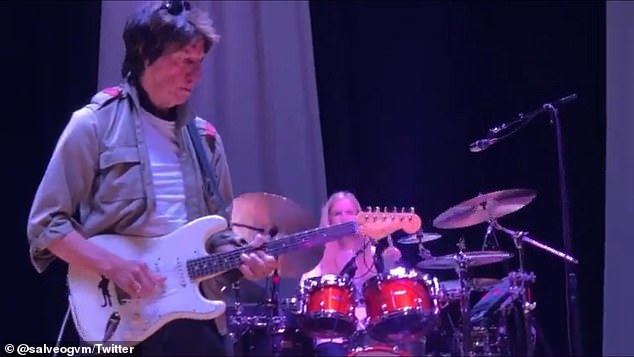 Depp and Beck, 77, frequently recorded together during the lockdown of the initial wave of the Covid-19 pandemic

Meanwhile, the 58-year-old Depp got an apparent show of support from rock legend Paul McCartney, who showed a video Depp filmed for the Beatle in 2012 at his concert in Orlando Saturday.

He performed the song ‘My Valentine’ from his 2012 album Kisses on the Bottom. The video for the song features Depp and actress Natalie Portman.

The visual, which features Portman lip syncing to the music while Depp strums an acoustic guitar, showed on the big screens at McCartney’s ‘Get Back’ tour at Camping World Stadium in Orlando.

It’s unclear if the move was intentional, though McCartney has been playing the song with this visual treatment frequently on his 2022 tour, his first in three years.

TMZ said that the Rock N’ Roll Hall of Famer has not used the video during previous tours. 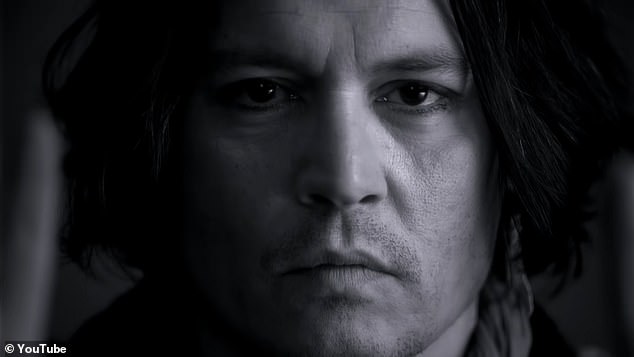 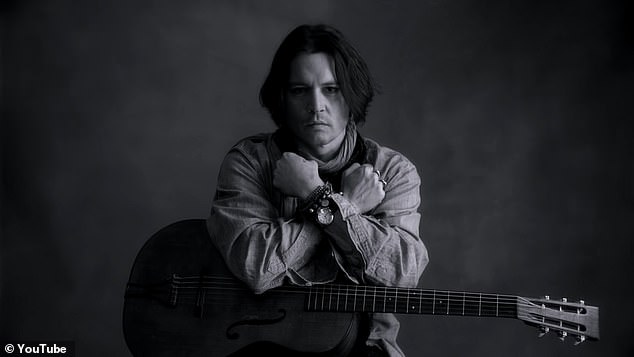 He performed the song ‘My Valentine’ from his 2012 album Kisses on the Bottom. The video for the song features Depp and actress Natalie Portman

Both Depp and Heard’s legal teams delivered closing arguments Friday in the blockbuster defamation trial that has raged on for six weeks.

Vasquez noted expert accounts that diagnosed Heard with borderline personality disorder and called the actress a ‘deeply, troubled person’ who is ‘desperate for attention and approval.’

It is six years ago to the day that Amber Heard filed a restraining order against Depp, which Vasquez said ‘ruined’ the actor’s life.

‘On May 27th 2016 Miss Heard walked into a courthouse in Los Angeles, California to get a no notice ex parte restraining order against Mr. Depp and in doing so ruined his life by falsely telling the world she was a survivor of domestic violence against Mr. Depp.

‘Today on May 27 2022, exactly six years later, we asked you to give Mr. Depp his life back by telling the world that Mr. Depp is not the abuser Miss Heard said he is and hold Miss Heard accountable for her lies.’

At 3pm local time the jury in the case went out to deliberate. 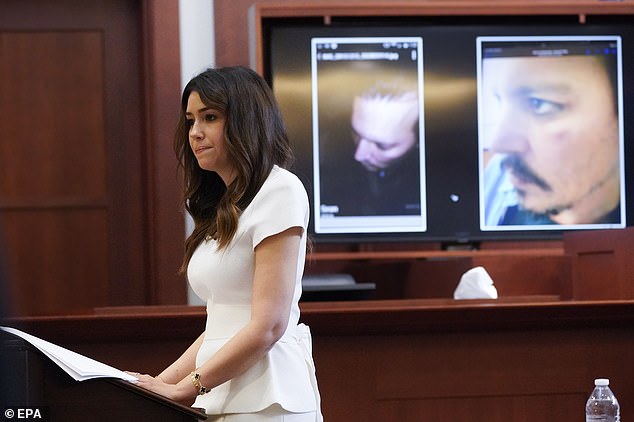 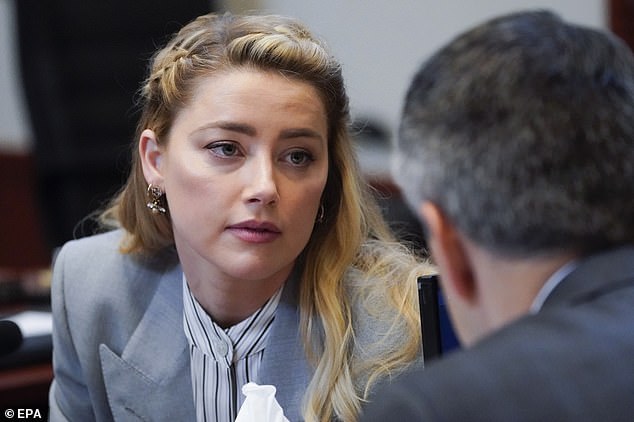 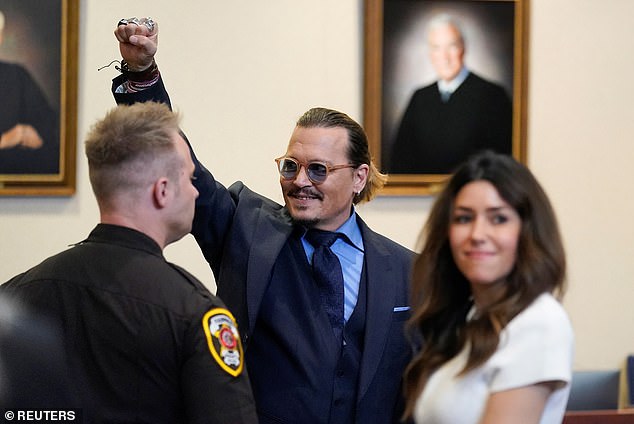 It is six years ago to the day that Amber Heard filed a restraining order against Depp, which Vasquez said ‘ruined’ the actor’s life 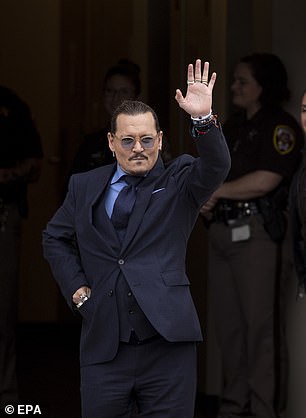 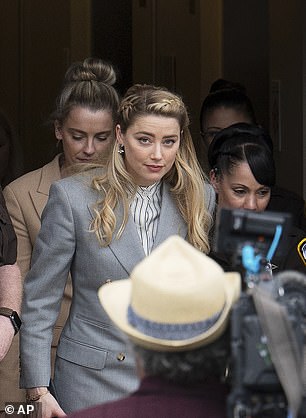 Depp waved to his adoring fans as he left the courtroom, while Heard was more subdued after closing arguments 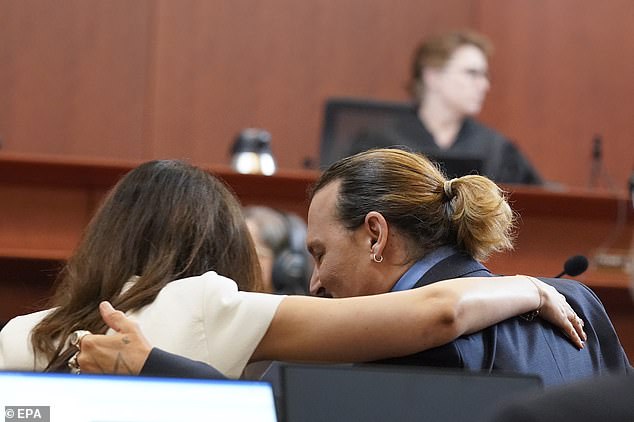 ‘What’s at stake is this man’s good name, what’s at stake is a man’s life that he lost when he was accused of heinous crimes and the life he could live when he’s finally vindicated,’ Vasquez said.

‘Failure to seek medical attention meant you were not injured,’ Rottenborn said. ‘If you do seek medical treatment then you’re crazy and if you do everything to help your spouse rid himself of drugs and drink then ‘you’re a nag.’

Rottenborn continued, ‘And if you decide enough is enough and you have to leave to save yourself you’re a gold digger. That’s the message Mr. Depp is asking you to send.

He said that in Johnny Depp’s ‘world’ you don’t leave him, and if you do ‘he will start campaign of global humiliation against you.

‘Mr. Depp cannot and will not take responsibility for his own actions.’ 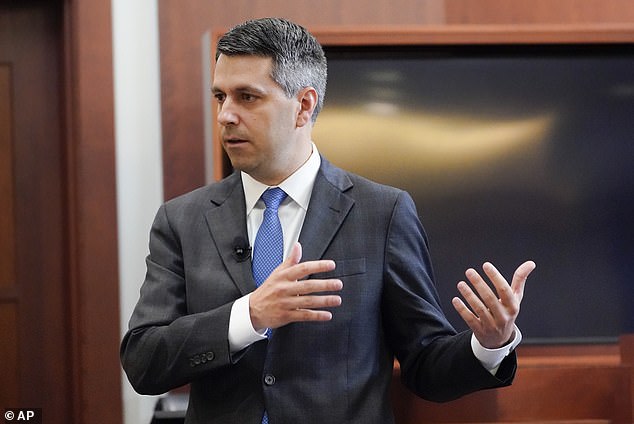 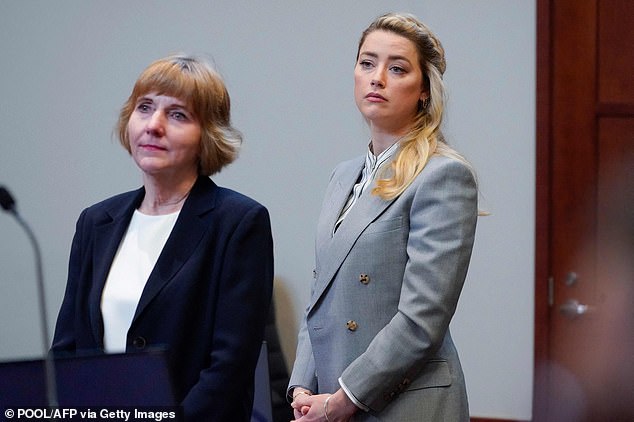 Depp sued his ex-wife in February 2019 after she wrote an op-ed published by the Washington Post in December 2018 which Depp claimed left him with extensive financial loss to his career.

He added that he felt he could no longer act due to her allegations.

In the op-ed, Heard had described becoming ‘a public figure representing domestic abuse’ and ‘seeing, in real time, how institutions protect men accused of abuse.’

Johnny Depp and Amber Heard marry in a private civil ceremony at their LA home, four years after they met as co-stars on the set of The Rum Diary. The couple celebrate with a lavish reception on an idyllic private island in the Bahamas that Depp bought in 2004 for $3.6 million.

Heard breaches Australia’s biosecurity laws when she and Depp fail to declare their two Yorkshire terriers when they arrive Down Under on a private jet for the filming of Pirates of the Caribbean: Dead Men Tell No Tales. Heard admits falsifying quarantine documents and is placed on a $1,000 one-month good behavior bond.

Heard files for divorce after 15 months of marriage, citing irreconcilable differences. Four days later a judge issues a temporary restraining order against Depp over domestic violence allegations. Pictures of Heard’s alleged injuries hit the tabloids but the LAPD finds no evidence of a crime.

Depp and Heard reach a $7 million divorce settlement which the actress promises to give to charity. Their marriage was ‘intensely passionate and at times volatile, but always bound by love,’ the former lovers say in a statement. ‘There was never any intent of physical or emotional harm’.

The Washington Post publishes an op-ed by Heard, an ambassador for women’s rights at for the American Civil Liberties Union, urging support for women who suffer domestic violence. ‘Two years ago, I became a public figure representing domestic abuse, and I felt the full force of our culture’s wrath for women who speak out,’ reads the headline.

Despite not being named in the article, Depp files a $50 million defamation suit in Fairfax Circuit Court, Virginia saying it implied he was an abuser and got him fired from the Pirates of the Caribbean franchise. Depp dismisses Heard’s abuse allegations as a ‘hoax’ and claims he was actually the victim of her violence.

Heard countersues for $100 million, claiming vengeful Depp and his lawyer Adam Waldman targeted her with a vicious smear campaign, using media allies and internet trolls to amplify false stories about her and derail her acting career.

Depp faces an uphill battle to save his reputation after he loses a libel battle with a British tabloid that labeled him a ‘wife beater’. A judge in London’s rules that The Sun’s 2018 article was ‘substantially true’ and that the father-of-two had attacked Heard a dozen times, causing her to fear for her life on three occasions.

After lengthy delays due to the Covid pandemic, the former flames finally lock horns in Fairfax County, Virginia where the Washington Post servers that published the disputed op-ed are based. The trial is expected to last six to seven weeks and celebrities tipped to give evidence include James Franco, Paul Bettany and Ellen Barkin.