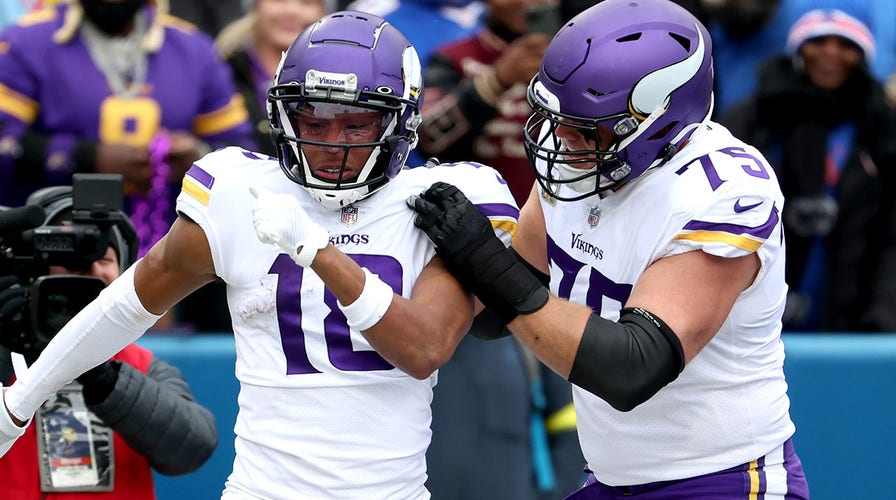 The Buffalo Bills and Minnesota Vikings’ Week 10 matchup went completely off the rails Sunday in what is likely the game of the year so far this season.

And the Vikings putting together a 17-point second-half comeback to take the lead with less than a minute to play isn’t even the main talking point of the wild game.

With quarterback Josh Allen playing through an elbow injury suffered in last week’s loss to the New York Jets, Buffalo got out to a hot start. Devin Singletary had two rushing touchdowns in the first quarter and Allen found Gabriel Davis for an 11-yard touchdown pass before the half. 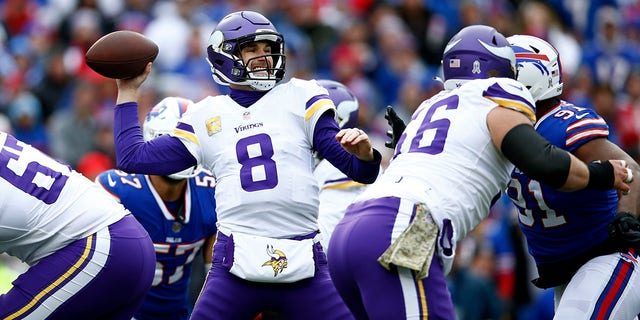 Kirk Cousins of the Minnesota Vikings attempts a pass during the first quarter against the Buffalo Bills at Highmark Stadium on Nov. 13, 2022, in Orchard Park, New York.
(Isaiah Vazquez/Getty Images)

Dalvin Cook would spark a Vikings comeback on the next offensive play for Minnesota. He busted out an 81-yard run to trim the deficit to 10 points going into the fourth quarter.

With 4:34 left to play, the Vikings got the ball into the red zone and punched into the end zone with a C.J. Ham rushing touchdown. It would be the one-time Pro Bowler’s first rushing touchdown since 2017. Unfortunately, Greg Joseph missed the extra point and the Bills’ lead was still four points.

And that’s when things got weird.

The Vikings would force the Bills to punt the ball away with 3:26 left in the game, leaving quarterback Kirk Cousins an opportunity to win the game.

Buffalo got Minnesota to a 4th-and-18 when Cousins found Justin Jefferson in between two Bills defenders. Jefferson made a one-handed catch and somehow was strong enough to prevent any defensive backs from getting the ball ripped out from his grasp.

Cousins and Jefferson would hook up again to get to within a half-yard of the end zone after a touchdown call was reversed. On 4th-and-goal, Cousins took the snap and fired an incomplete pass to Cook. Luckily, the Bills were called for an offside and the play was redone.

Cousins tried to sneak the ball in from the 1-yard line but was stopped.

Allen took the snap and tried to push the pile forward to get some breathing room, but instead he fumbled the ball, which was recovered in the end zone by Eric Kendricks for a touchdown. The Vikings took a three-point lead with 44 seconds remaining in the game. 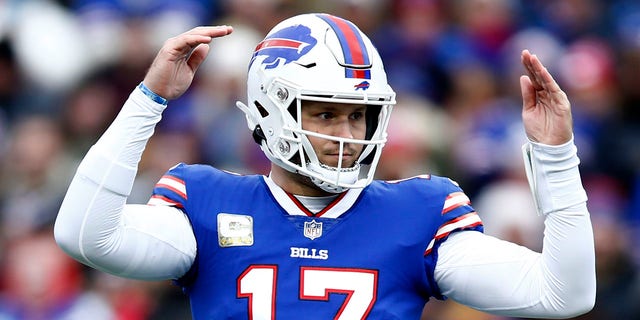 Josh Allen of the Buffalo Bills signals toward the sideline during the first quarter against the Minnesota Vikings at Highmark Stadium on Nov. 13, 2022, in Orchard Park, New York.
(Isaiah Vazquez/Getty Images)

Certainly, the game was over here, right? Nope.

Allen completed two short passes to Dawson Knox and then fired a deep pass to Davis for 20 yards. It appeared that Davis may not have had control of the ball when he landed on the ground, but the officials didn’t review the play. Allen would find Isaiah McKenzie for a short pass, and on the next play, a pass interference call in the end zone got Buffalo into field-goal range. Bass would send the game into OT.

In overtime, another Cousins pass to Jefferson would get fans revved up for a potential win. But Minnesota would settle for a field goal after a sack and an incomplete pass.

Allen got the ball one more time to try and get the win or extend the period, but he threw an interception to Patrick Peterson for the second time of the day, ending the game.

The Vikings walked out of western New York with a 33-30 victory and moved to 8-1 on the season. 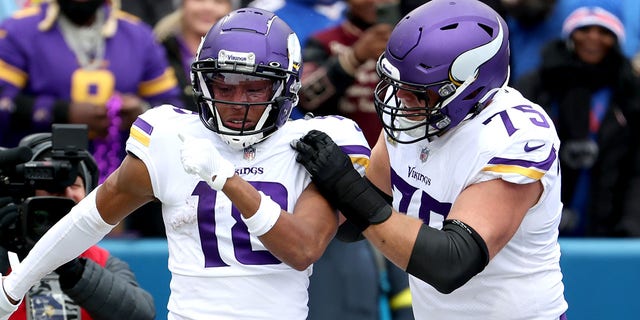 Justin Jefferson of the Minnesota Vikings, left, celebrates his touchdown during the first quarter against the Buffalo Bills at Highmark Stadium on Nov. 13, 2022, in Orchard Park, New York.
(Timothy T Ludwig/Getty Images)

Cook finished with 119 yards and a touchdown. It’s the second time he’s rushed for more than 100 yards this season.

Stefon Diggs, who had his own incredible catch earlier in the game, finished with 12 catches for 128 yards. Davis had six catches for 93 yards.