Married school football coach, 29, is charged with sexually assaulting frightened student, 16, multiple times and accused of sending her a message saying ‘Delete everything’ on day he was suspended over allegations

A married high school football coach sexually assaulted a frightened student multiple times, then warned her to ‘delete everything’ from her phone when the alleged abuse was rumbled, police say.

Authorities believe that the illegal contact between Kerscher and the 16 year-old student occurred between November 2021 and May 2022. The age of consent in Missouri is 17.

Kerscher was put on leave from Pleasant Hill high School on May 5. He married his college-sweetheart wife, Nicole Riddle, in August 2020, according to the couple’s online gift registry. 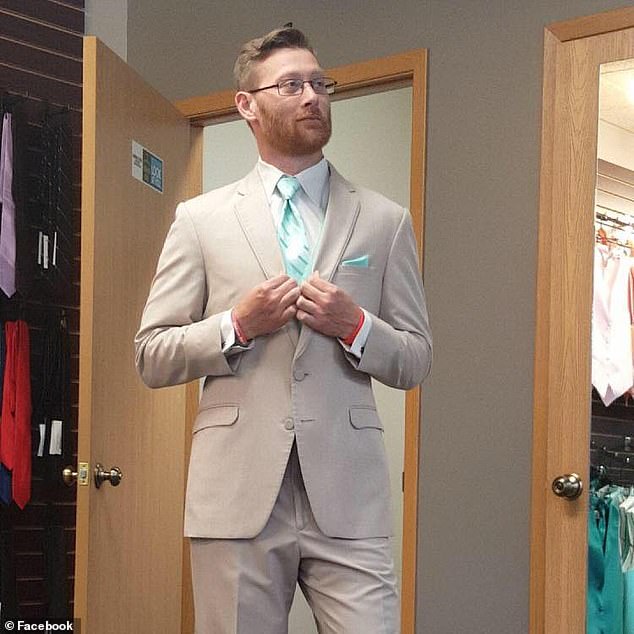 Justin Kerscher is facing multiple charges including sodomy of a minor 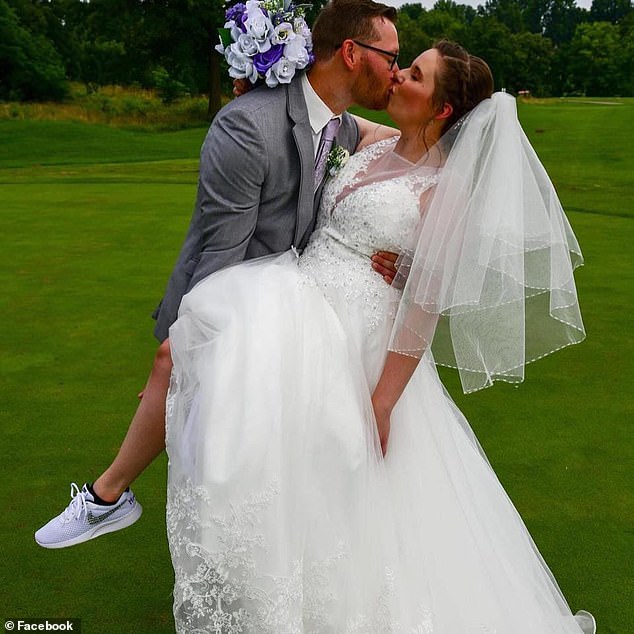 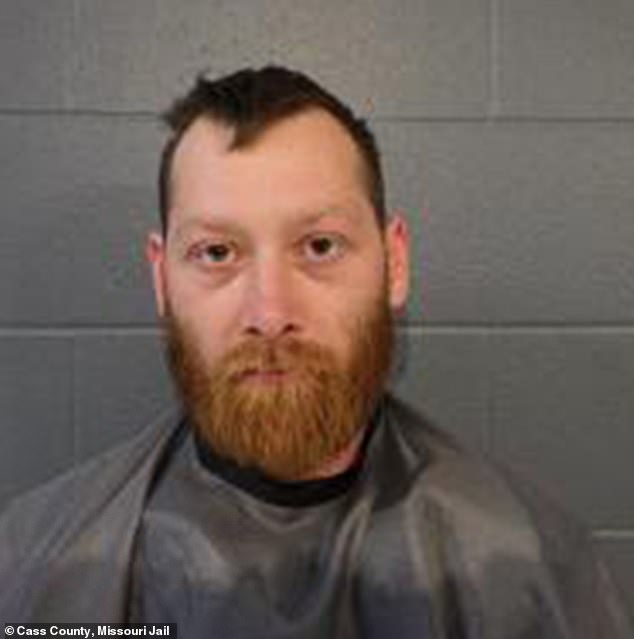 Kerscher remains in custody in Cass County, Missouri, on a $500,000 cash bond

According to documents in the case, upon hearing of his suspension, Kerscher told the victim to wipe their shared social media connections by writing: ‘Delete everything.’

The couple’s relationship began on social media with the pair messaging each other, reports KCTV.

Law enforcement were first notified about Kerscher’s alleged actions when the victim told a social worker about it who then notified police, reports The Kansas City Star. 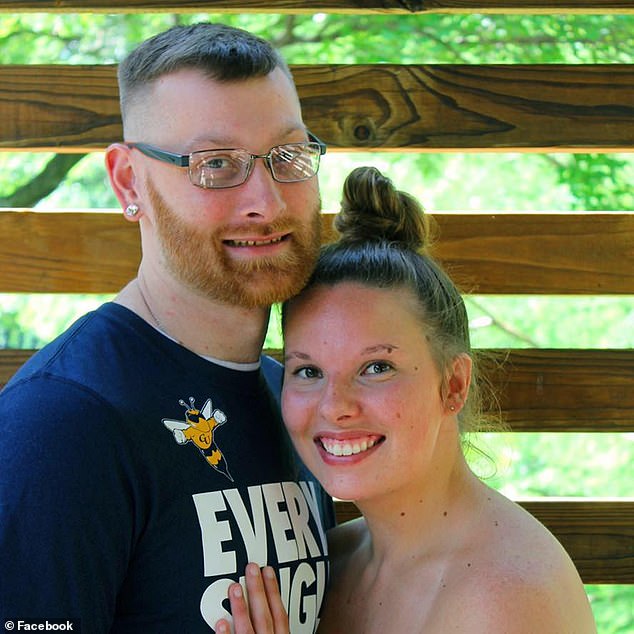 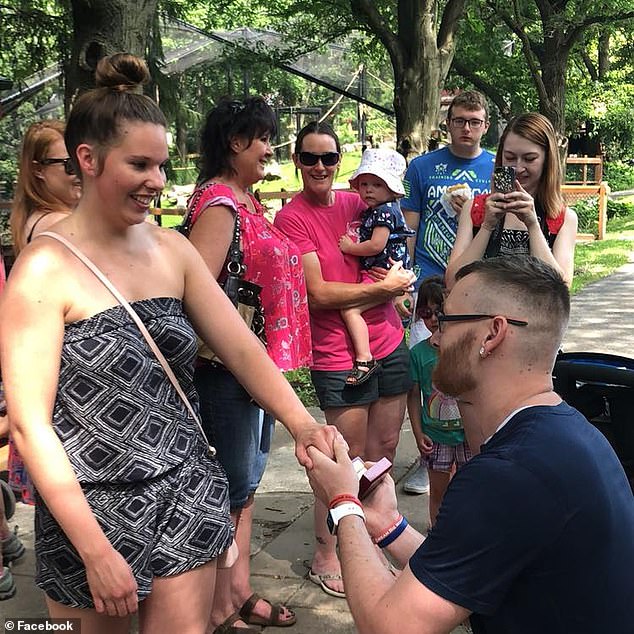 Kerscher became engaged to his wife in 2018 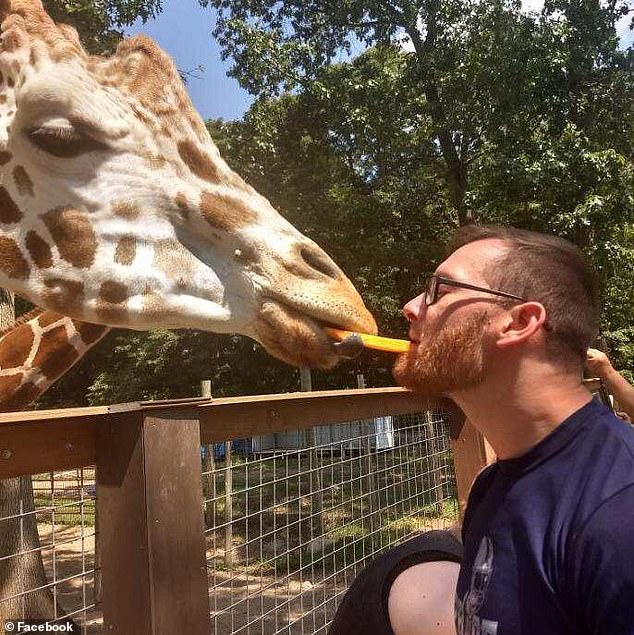 At the time the relationship began, the victim told the social worker that she thought that Kerscher was a senior in the school not a member of staff.

A statement from the school district confirms that Kerscher has been fired from his role at Pleasant Hill.

The station’s report goes on to say that the victim told investigators that she was uncomfortable sending inappropriate photos to Kerscher, but that she was afraid of his reaction if she refused.

Kerscher allegedly told the victim that he would move to Pleasant Hill from his home in Kansas City so that she could stay with him. The victim told police that this scared her as she did not want to stay with him.

The victim went on to say that she felt controlled by Kerscher in addition to feeling ‘weird’ and ‘scared’ by him. She said that she felt as though she would have to go along with whatever he said or else he would keep badgering her about it. 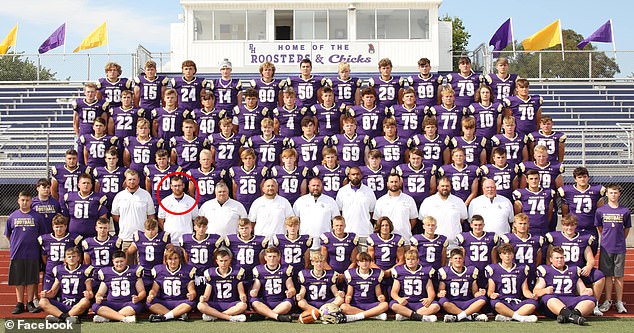 According to Kerscher’s LinkedIn page, he had only been with the Pleasant Hill School District for year where he was an assistant football coach 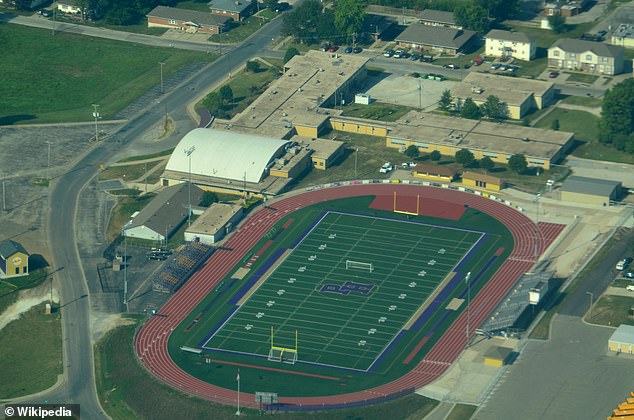 Prior to working in Pleasant Hill, Kerscher was behavioral specialist in the North Kansas City school district from December 2019 until June 2021

In one instance, the victim said that Kerscher stayed at her home when her parents were away.

The victim said that Kerscher convinced her to allow him to come over. She said that he parked his pickup truck at a gas station so that nobody would see.

They ordered pizza and Kerscher spent the night in her bedroom where he forced her into having sex, the victim said.

Two of the pair’s encounters took place at Pleasant Hill city lake, the victim said, according to The Kansas City Star.

The victim said that  she was assaulted in the backseat of his pickup truck during one encounter at the lake. 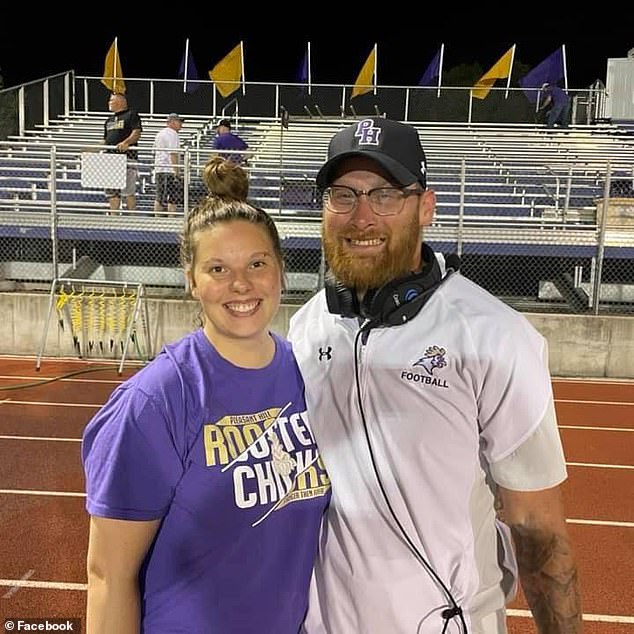 Kerscher and his wife were students at Graceland University in Iowa, a school affiliated with the Mormon faith

Despite their alleged illegal relationship, the victim also told officers that Kerscher would grab her by the hand in public and high-five her in the hallways of Pleasant Hill High School.

One section of the charging documents reads: ‘She stated she thought it was weird that he had already graduated college, he was a coach, and she was way younger. (The victim) said she was really weirded out and she knew the whole time it was wrong but she was too scared to tell anyone.’

According to Kerscher’s LinkedIn page, he had only been with the Pleasant Hill School District for year where he was an assistant football coach.

Kerscher writes on his page that he began working in the district in the summer of 2021 where in addition to his coaching, he was a paraprofessional. 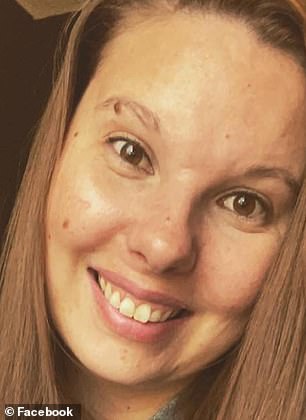 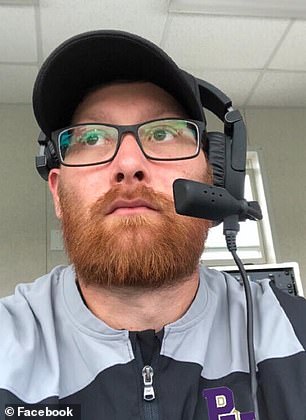 Prior to working in Pleasant Hill, Kerscher was behavioral specialist in the North Kansas City school district from December 2019 until June 2021.

Before that, Kerscher was an assistant football coach at St. Thomas Aquinas Catholic High School in Overland Park, Kansas, and in the West Des Moines school district in Iowa.

He also spent time working as a youth care worker in Olathe, Kansas.

Investigators are looking into the possibility that there are two other victims of Kerscher’s behavior, reports KHSB.

Speaking to KCTV, Olivia Williams, a senior at Pleasant Hill said that Kerscher was well-liked.

Williams added: ‘Everyone favored him so the fact that he could do something so disgusting, vile, shocks a lot of people.’

The pair were students at Graceland University in Iowa, a school affiliated with the Mormon faith.

Kerscher studied corrective exercise and performance enhancements as well as health and physical education at the school.

During his time at the school, Kerscher played as a linebacker for Graceland Yellowjackets. While his wife was on the school’s dance team, the Gadets.

He is also a graduate of Central City High School in Iowa.

Kerscher’s father-in-law wrote a touching tribute to the suspect following his college graduation saying: So proud of my future son-in-law today he finally finished his college studies so proud of him and the accomplishments he’s made he still reminds me a lot of myself sometimes. So send him some love everybody.’

According to Cass County officials, Kerscher is being held on a cash bond of $500,000. He will be arraigned on June 30.

‘Additional information cannot be shared; however, we can assure you that the staff member in question is no longer employed by the district. The safety and security of our students continues to be our greatest priority.’