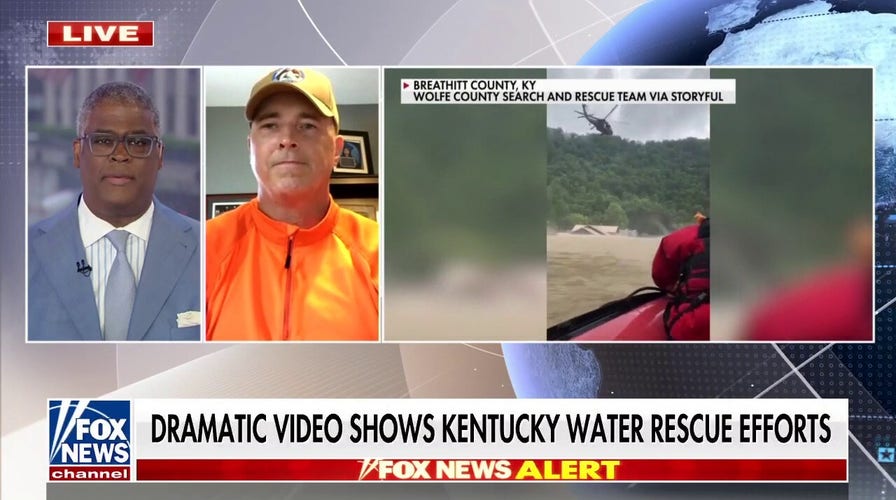 Kentucky flash flooding was ‘quite terrifying’: Search and Rescue chief

Wolfe County Search and Rescue Chief John May recalls his experiences saving victims of the Kentucky mass flooding that killed at least 37 people on ‘Your World.’

Wolfe County Search and Rescue Chief John May described the destruction wrought by the Kentucky flooding as “nothing like [he]’d ever seen before” Tuesday on “Your World.”

“Once we arrived on scene, the amount of water – the debris that was coming down the north fork of the Kentucky River was nothing like I’d ever seen before,” he told guest host Charles Payne. “It was actually quite terrifying.”

“We knew we were going to be in for a long day once we first arrived on scene.”

May recounted his team and the Kentucky National Guard’s dramatic rescue of a family of five from an attic as floodwaters were overtaking their home.

The rescuers prepared to use a chainsaw to cut through the roof but could not do so because the roof was made of tin. Nor could they evacuate the family through a vent at the top of the house because of an elderly woman’s age and a disability.

The rescue teams resorted to knocking out windows at the bottom of the rear of the house.

“And then we had them come down one at a time in about chest-deep water, and we would pull them into our boat and then take them up to the front of the house and offload them on to the actual roof. And they would climb up the roof to where the Guardsmen [were] stationed at, and they would do the hoist operation from that location.”

“It was really terrifying.”

Graham Colton is an associate editor for Fox News Digital. Story tips can be sent to graham.colton@fox.com and on Twitter: @GrahamGColton.