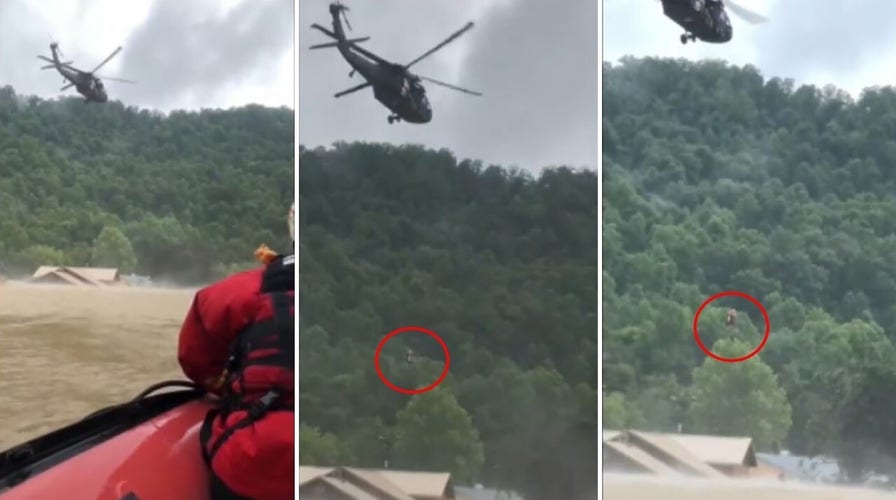 As rescue operations continue in eastern Kentucky communities, Wolfe County Search and Rescue shared video of one such operation over the weekend.

Wolfe County swift water techs can be seen onboard a watercraft while a Kentucky National Guard helicopter hovers above the roofs of homes barely standing above the swirling floodwaters.

Rescuers said that the techs broke through a window in the home to reach the trapped family in the attic. All five were taken out of the home one at a time to the roof, where a guardsman helped coordinate the hoist via helicopter.

One family member hoisted to safety was an 83-year-old woman, rescuers said. No other details about those rescued were immediately available. 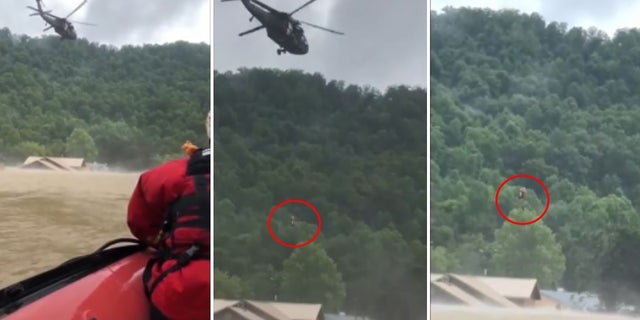 Wolfe County rescuers and the Kentucky National Guard helped rescue a family of five that was trapped in their attic during catastrophic flooding that left some communities in the eastern part of the state under water. (Wolfe County Search and Rescue )

As communities try to recover from the massive flooding, Gov. Andy Beshear said Monday that the death toll has risen to 30, with hundreds of people remaining unaccounted for.

Parts of eastern Kentucky received between 8 and 10 1/2 inches of rain over 48 hours last week and the National Weather Service said radar indicated up to 4 inches of rain fell Sunday in some areas.

More severe storms were possible across all the counties affected by the flooding, Beshear said.

On Sunday, Beshear appeared on NBC’s “Meet the Press,” painting a grim picture of what can be expected in the days and weeks to come.

“We’re going to be finding bodies for weeks,” Beshear said. “Many of them swept hundreds of yards, maybe a quarter mile plus from where they were lost.”