Disastrous flash floods and torrential rain have killed at least 16 people in Kentucky and the death toll is expected to double and include children, it was announced this morning.

The catastrophic downpours have obliterated entire towns – submerging houses, cars, and buildings in deadly flood water as emergency services desperately scramble to save those who are trapped.

Governor of Kentucky Andy Beshear revealed the mounting death toll – as he braced the state for fatalities to more than double and he warned the count is ‘going to include some children.’

Homes with families inside were ‘completely swept away in the middle of the night, possibly while they were sleeping,’ amid the violent mega storms that have plagued the state, the Governor said today.

Raging thunderstorms have pummeled the area, causing mudslides and ‘years’ worth of damage in what has been Kentucky’s most devastating flood in history.

It’s feared that waterlocked, saturated ground will continue to swell while rivers and creeks are expected to burst their banks with additional downpours this morning.

It will take the hundreds of people whose homes have been submerged in the dire flooding years to rebuild and recover from this cataclysmic disaster, Beshear said on Friday. 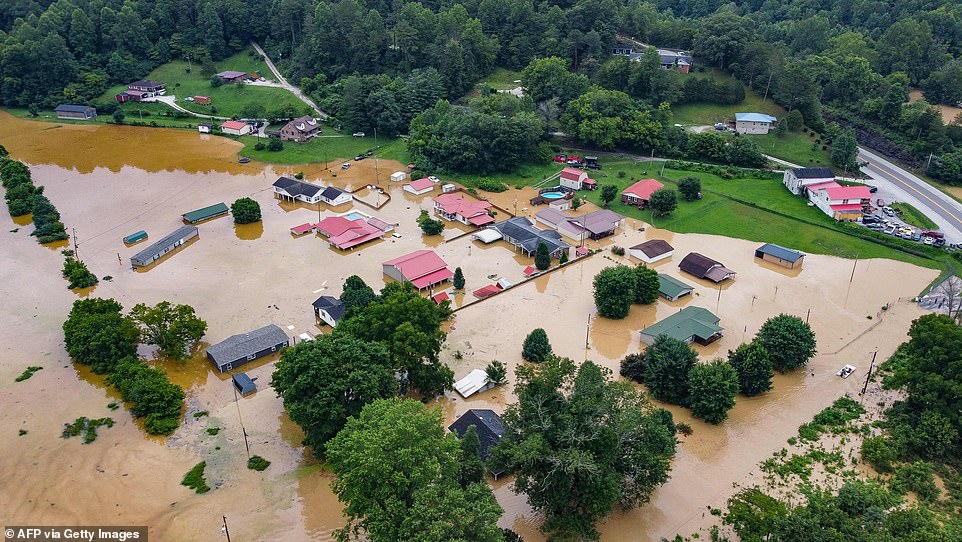 DEADLY FLOODS: A shocking aerial view of homes submerged under flood waters from the North Fork of the Kentucky River in Jackson, Kentucky, on July 28. The Governor has warned that the death toll is expected to double and include children 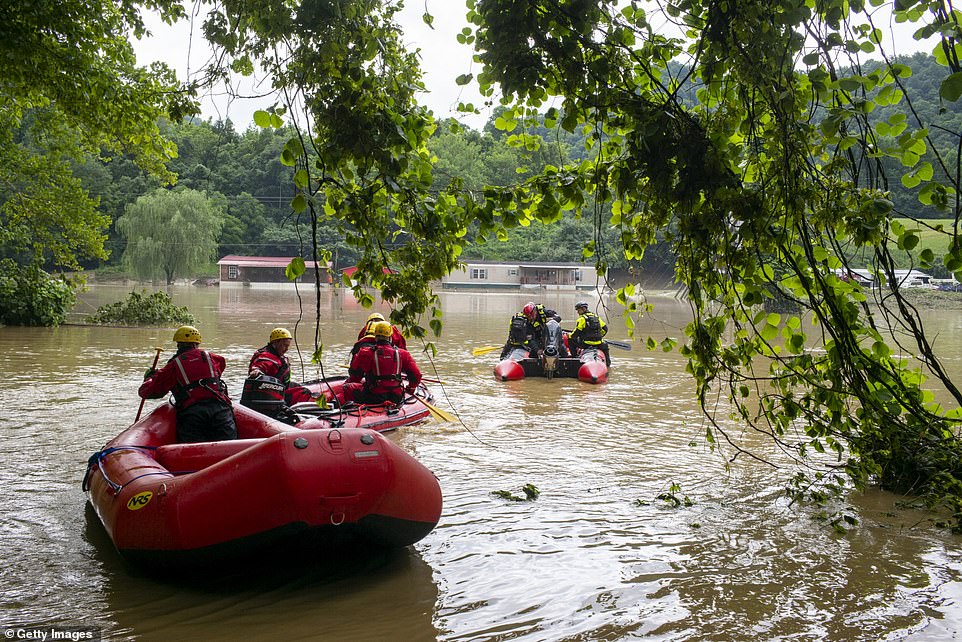 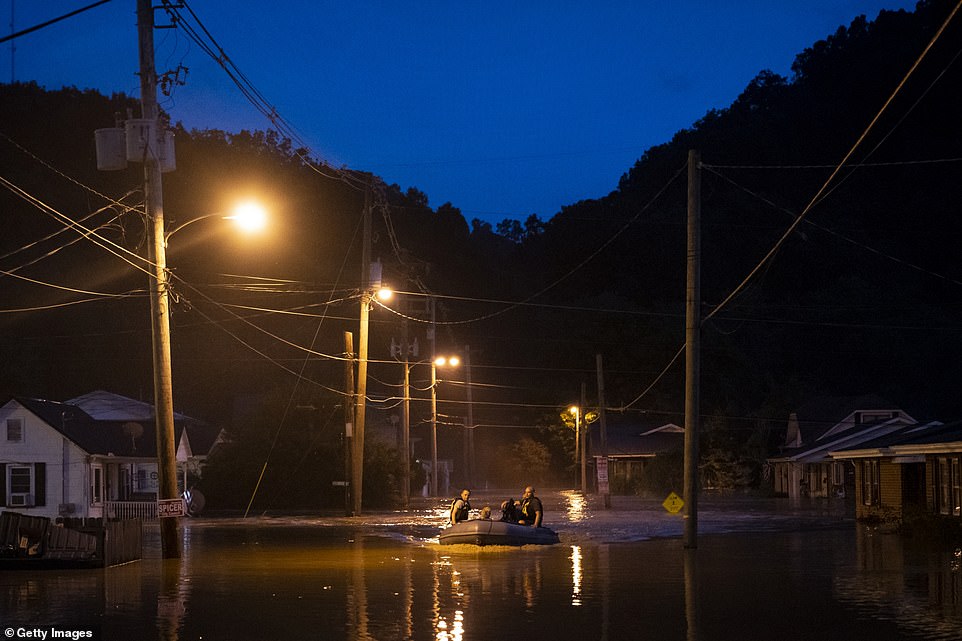 16 PEOPLE DEAD: Members of the Jackson Fire Department prepare to conduct search and rescue operations downtown in Jackson in the early hours of Friday morning 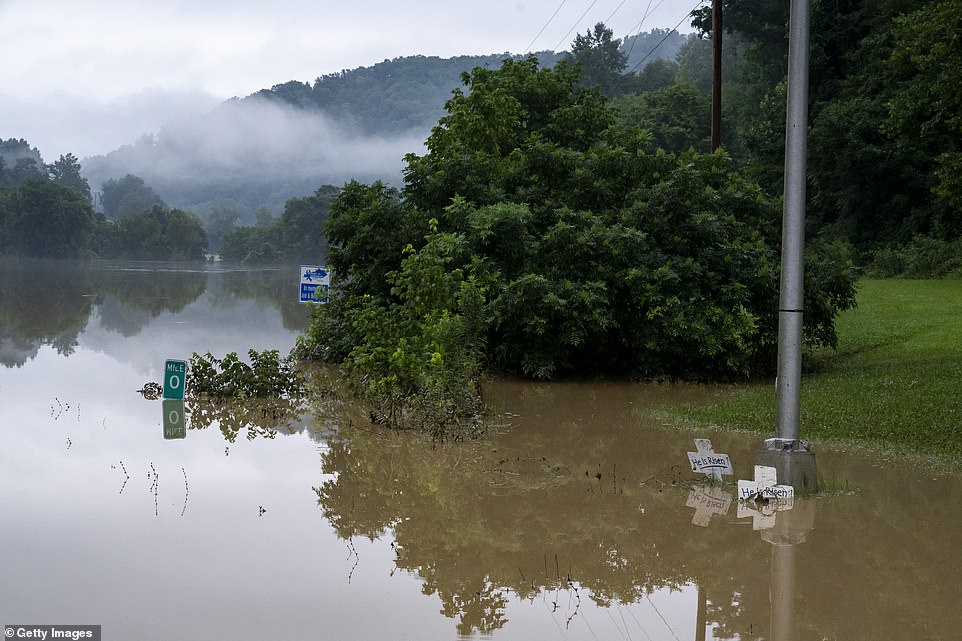 KENTUCKY: Flooding from the North Fork of the Kentucky River came over Bert T Combs Mountain Parkway outside of Jackson, Kentucky on July 29 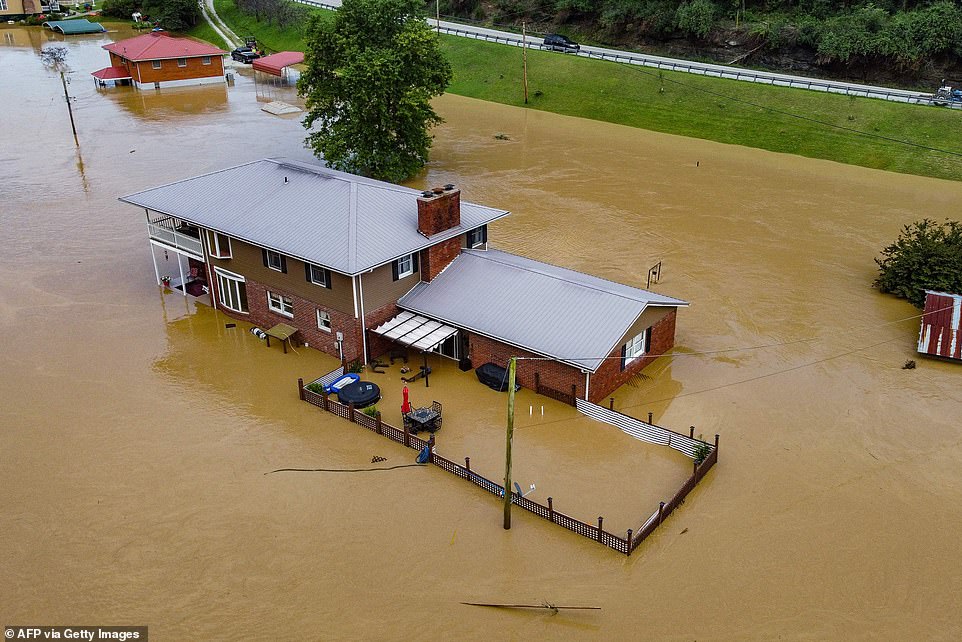 KENTUCKY: Flash flooding caused by torrential rains has killed at least 16 people in eastern Kentucky and left some residents stranded on rooftops and in trees 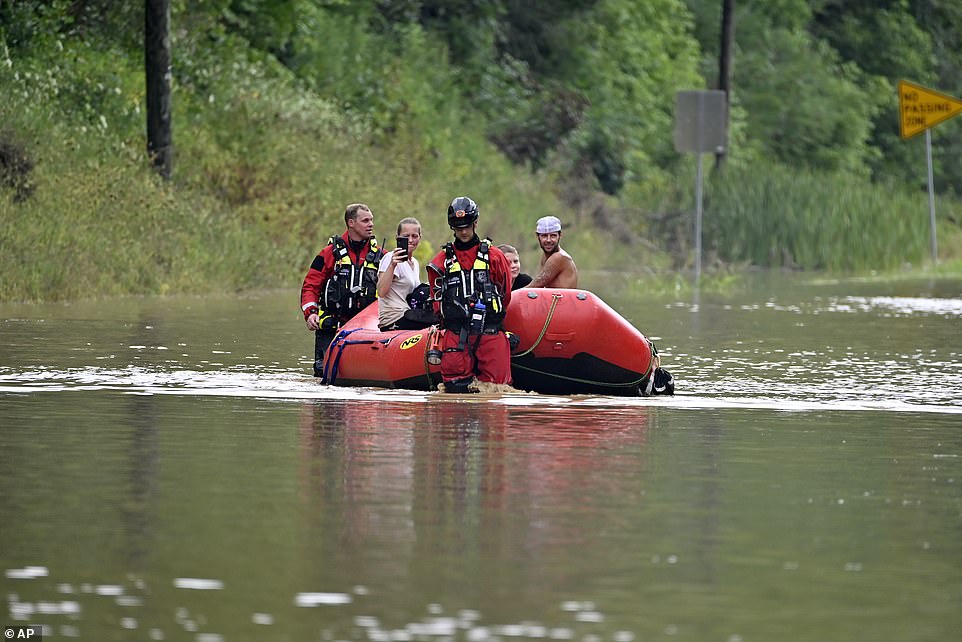 THE FLOOD RAGES ON: Members of the Winchester, Kentucky, Fire Department walk inflatable boats across flood waters over Kentucky State Road 15 to pick up people stranded by the floodwaters on Thursday 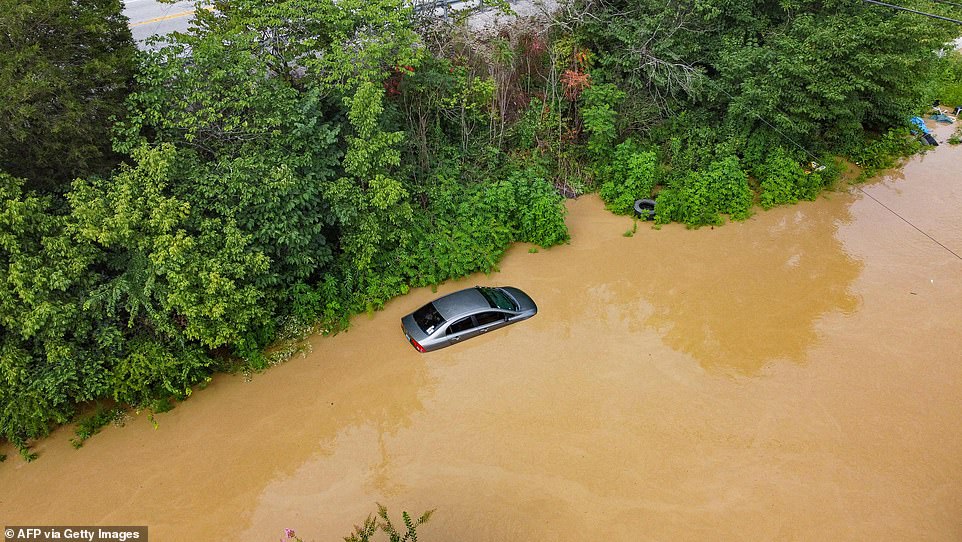 KENTUCKY: An aerial view of a car on a road submerged under flood waters from the North Fork of the Kentucky River in Jackson, Kentucky, on July 28 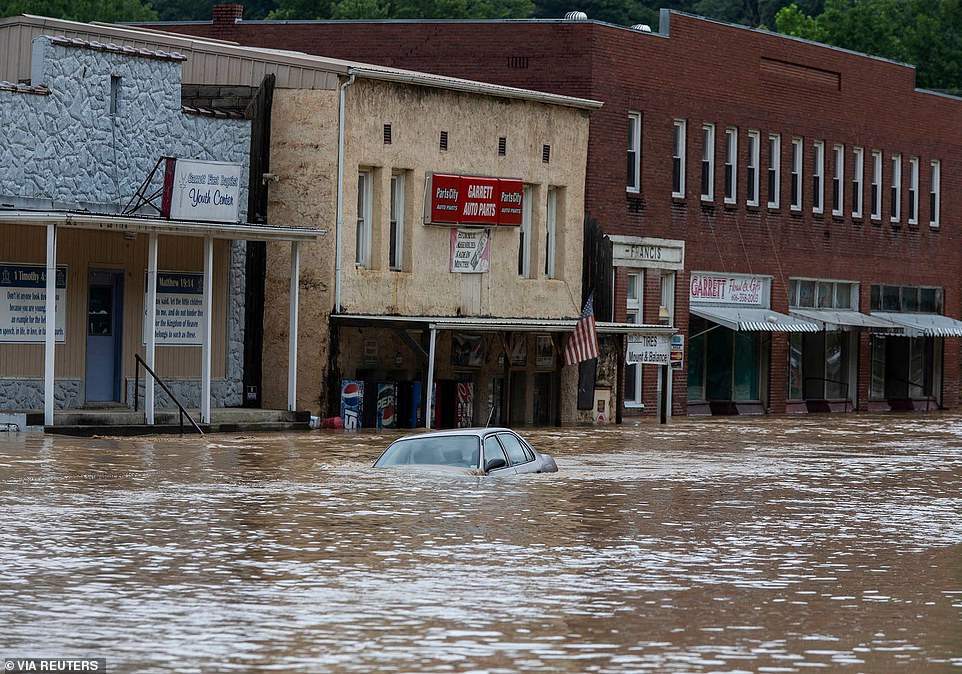 DESTRUCTION: A car is submerged in flood waters along Right Beaver Creek, following a day of heavy rain in in Garrett, Kentucky 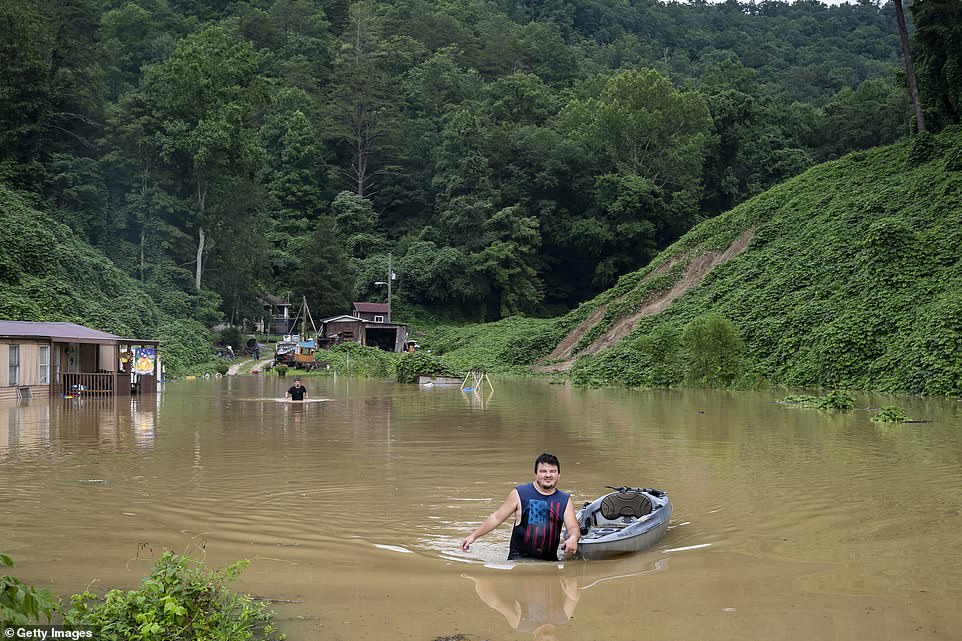 ‘MULTIPLE FAMILIES WILL BE LOST’: Lewis Ritchie, pulls a kayak through the water after delivering groceries to his father-in-law on July 28 outside Jackson, Kentucky 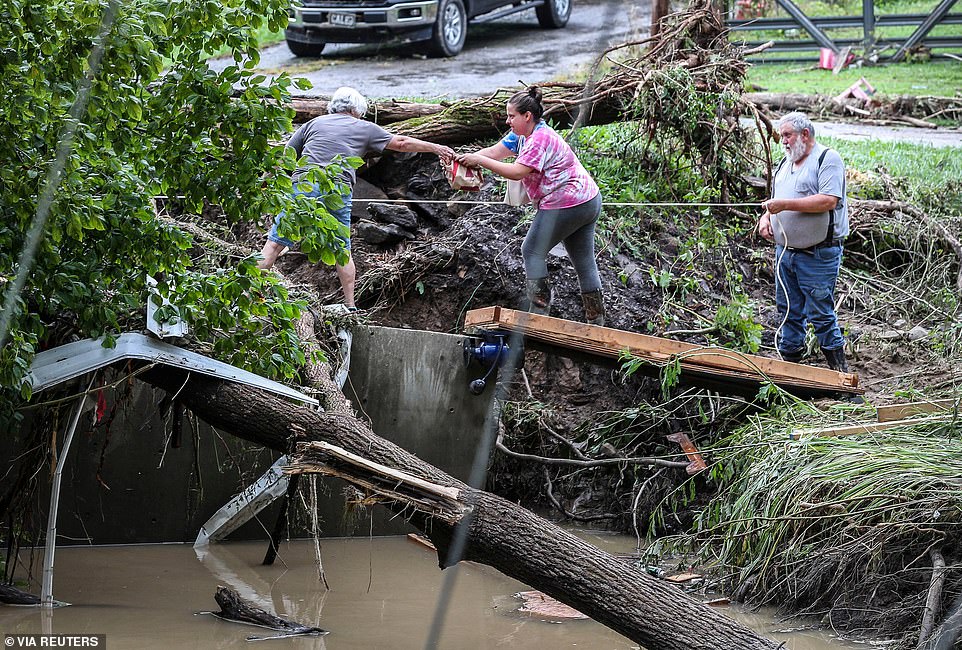 KENTUCKY: Tonya Smith, whose trailer was washed away by flooding, reaches for food from her mother Ollie Jean Johnson to give to Smith’s father, Paul Johnson, as the trio used a rope to hang on over a swollen Grapevine Creek in Perry County, Kentucky

Bashear said on Friday morning: ‘There’s going to be multiple families that we’ve lost. Kids that won’t get the opportunity to grow up and experience so much that we have.

‘This is so deadly, and it hit so hard, and it hit in the middle of the night. We’ve never seen something like this.

‘Hundreds will lose their homes and this is going to be another event that will take not months, but years to recover from.’

Devastating images show the catastrophic destruction the flooding has caused, with vehicles floating through streets which now resemble rivers and lakes.

Homes and businesses have been nearly submerged up to their rooves in the unrelenting deadly torrent – as 18 more hours of rainfall is expected on Friday before the deluge eases on the weekend.

Residents have been forced to climb trees and scramble to rooftops to look for safety as many locations in eastern Kentucky exceeded 10 inches of rain in the last 24 hours.

A series of storms drenching the eastern part of the state has dropped water that has yet to crest, leaving unprecedented damage on Kentuckians, said Beshear.

The Governor declared a state of emergency in six counties on Thursday morning.

Rain water was as high as the leaves of nearby trees and power poles were sticking up from greenish brown water, images from the destruction revealed.

The number of people dead as a result of the deadly weather system reached eight yesterday – but the toll has now hit 16. 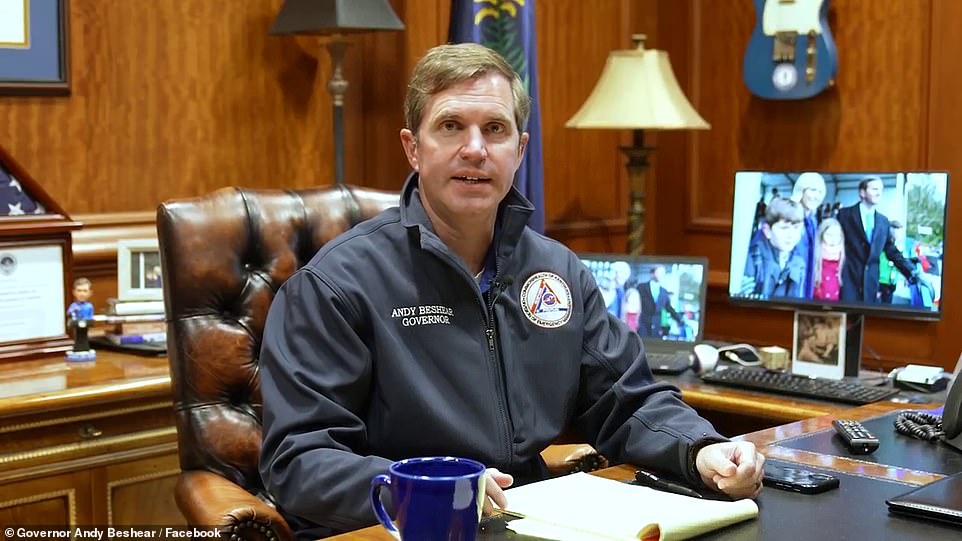 ‘THIS IS SO DEADLY’: Governor of Kentucky Andy Beshear said that the death toll, which is expected to double and include children, had reached 16. He expects the state to take ‘years’ to recover from what he described as the worst flooding event in Kentucky’s history 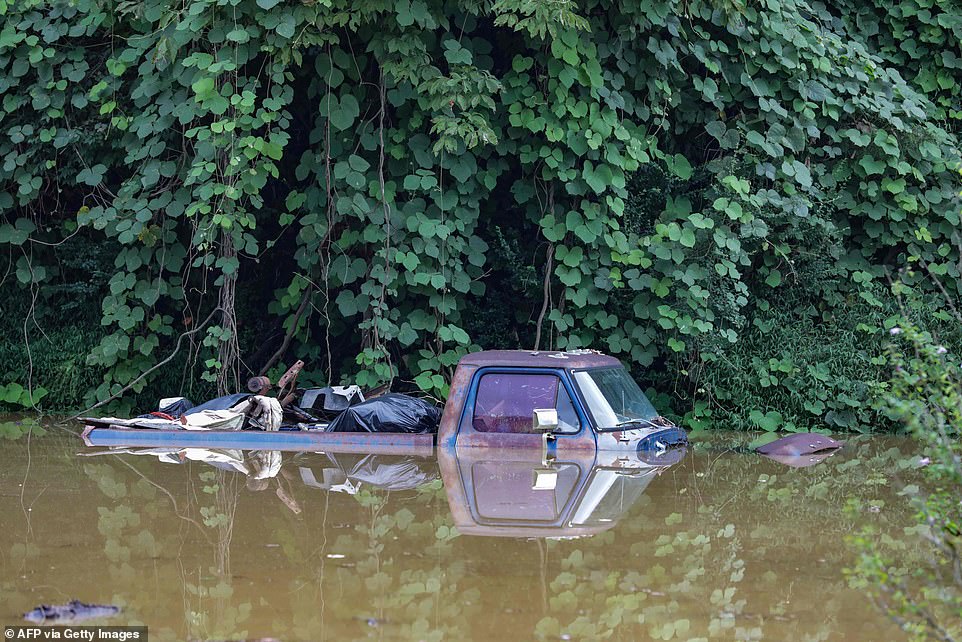 KENTUCKY: An abandoned pick-up truck is seen submerged under flood waters from the North Fork of the Kentucky River in Jackson, Kentucky 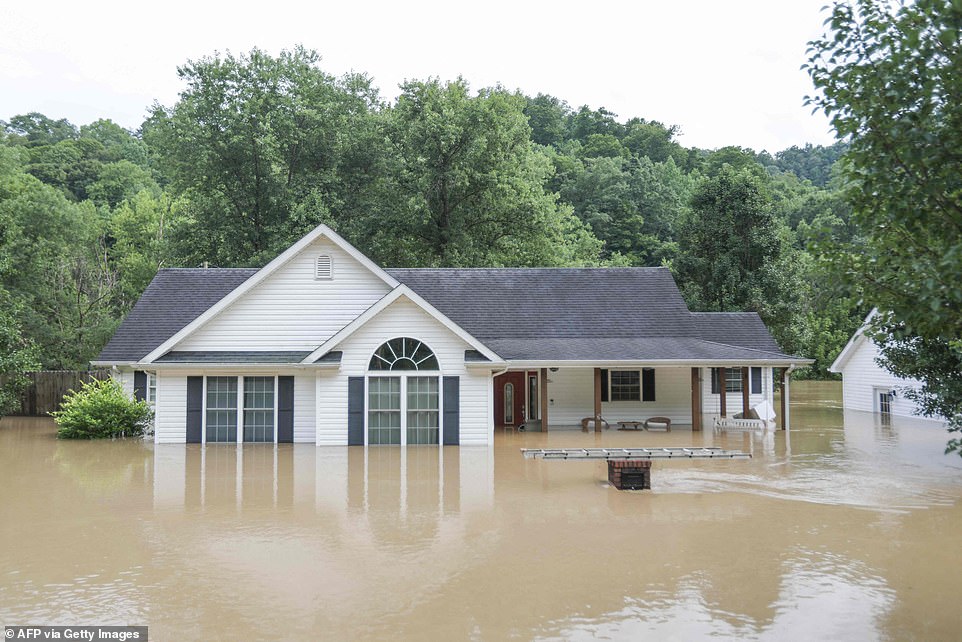 DEADLY STORM: A house is seen half submerged by flood waters from the North Fork of the Kentucky River in Jackson, Kentucky. The death toll, which is expected to continue rising, has now reached 16 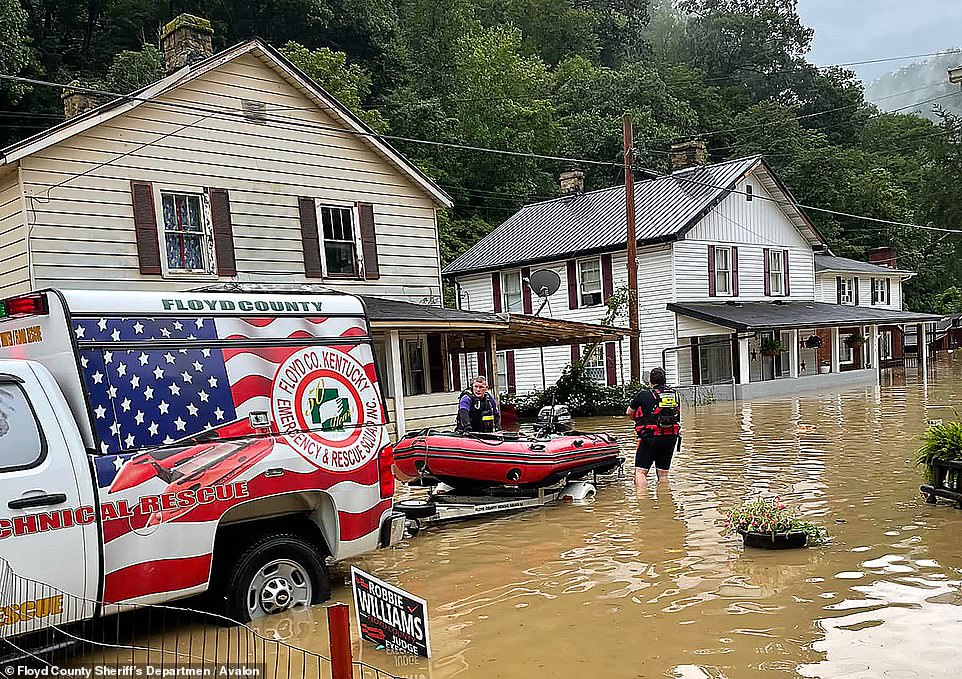 One man from Lexington, Kentucky, revealed that his daughter and her dog were forced to sit on the very top of a rooftop, completely encircled by floodwater before being rescued yesterday.

Terry Adams said that Chloe had to put her dog in a container that would float before swimming to her neighbor’s roof where she waited hours to be saved amid the calamitous flash floods.

He wrote on social media: ‘My daughter is safe and whole tonight. She saved her dog by putting her in a container that would float and then swam with her to a neighboring rooftop.

‘She waited hours until she could be rescued. She is a hero. I love you Chloe. You are simply amazing. We lost everything today…everything except what matters most.’ 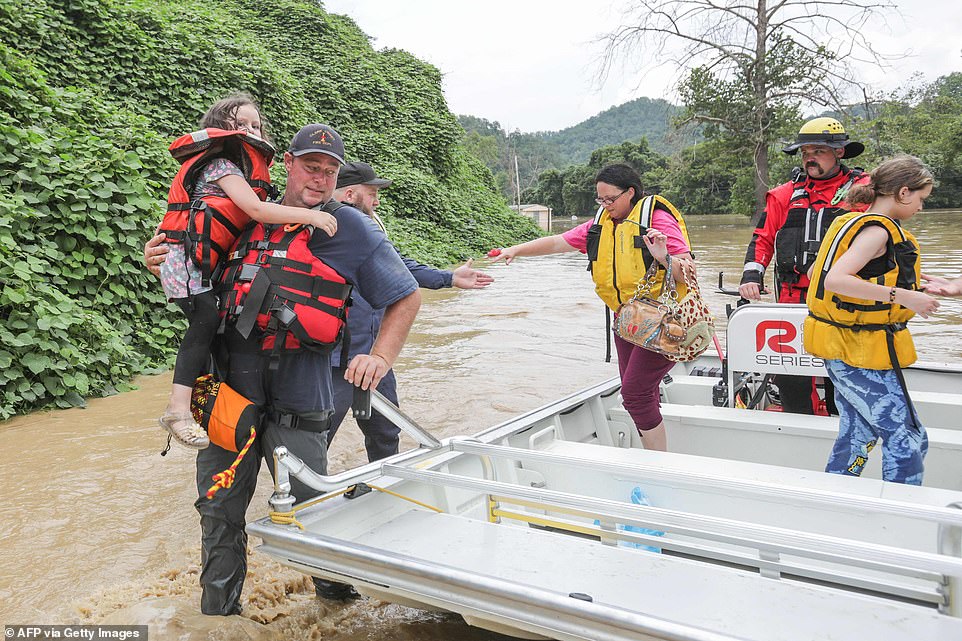 RESCUE MISSION: A group of stranded people are rescued from the flood waters of the North Fork of the Kentucky River in Jackson, Kentucky 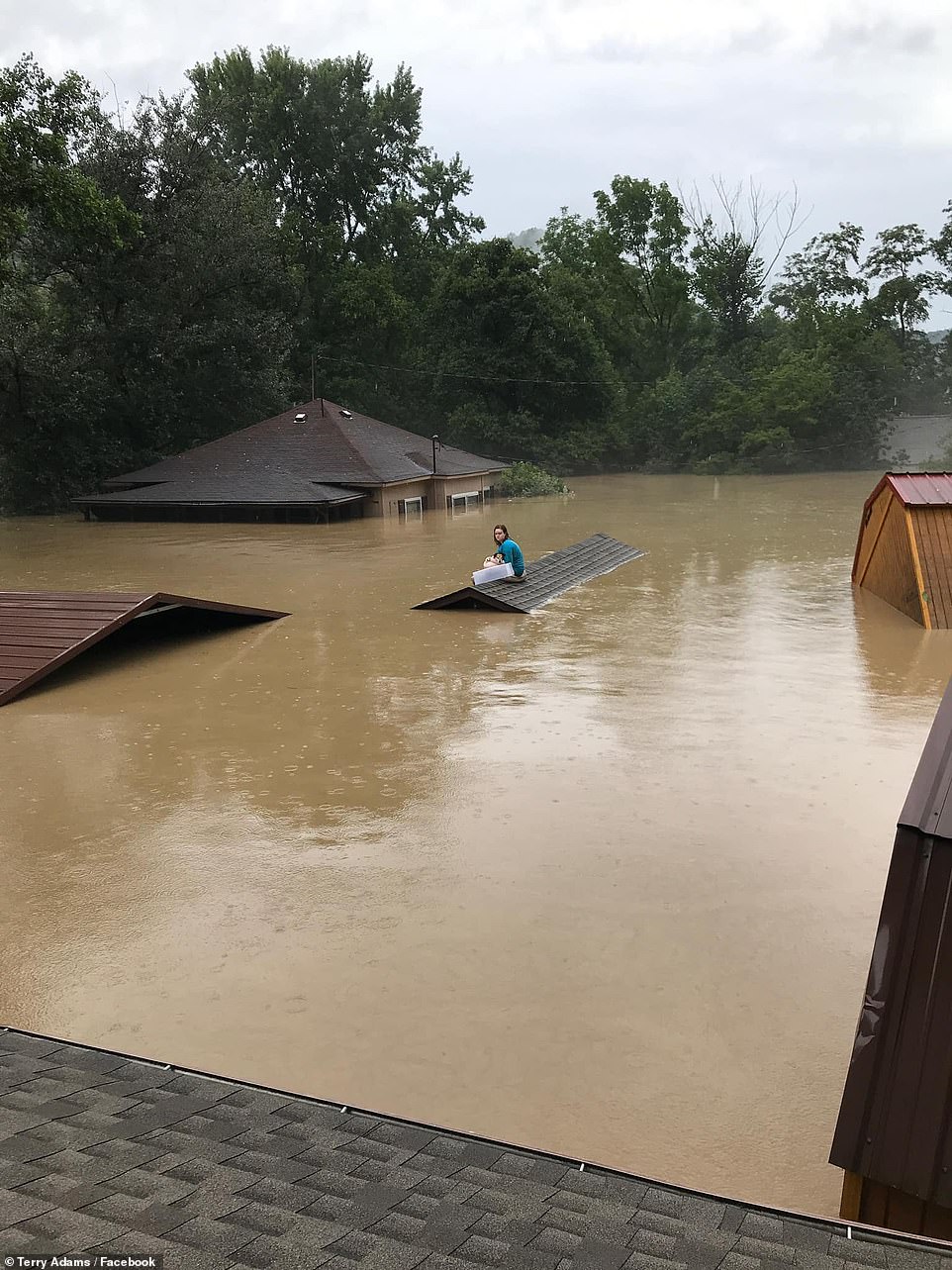 SHE IS A HERO: Terry Adams posted a picture of his daughter Chloe, who was stranded on a rooftop with her dog, who she put inside a container to help him float along with murky floodwater that encircled their home in Kentucky 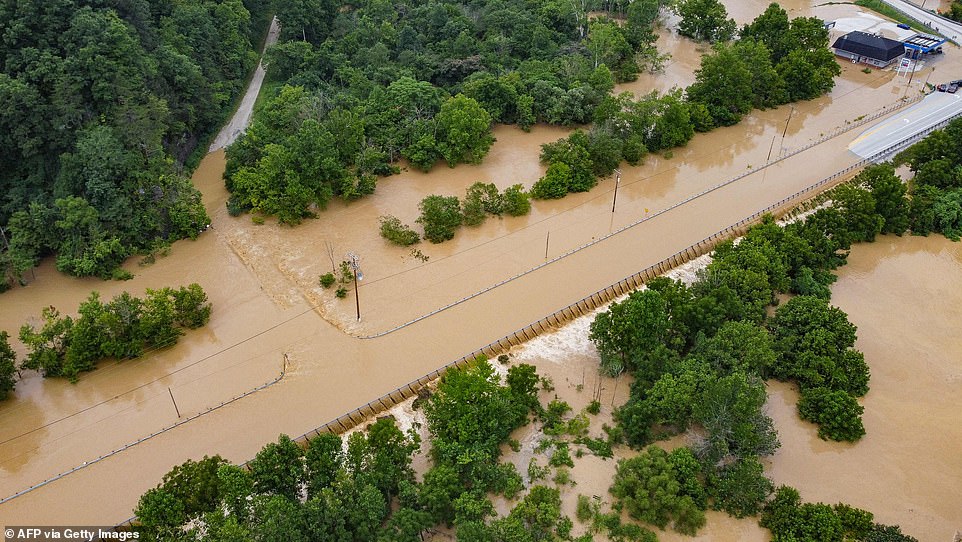 KENTUCKY: Roads have turned into rivers and lakes in the unrelenting flooding plaguing the state of Kentucky this week 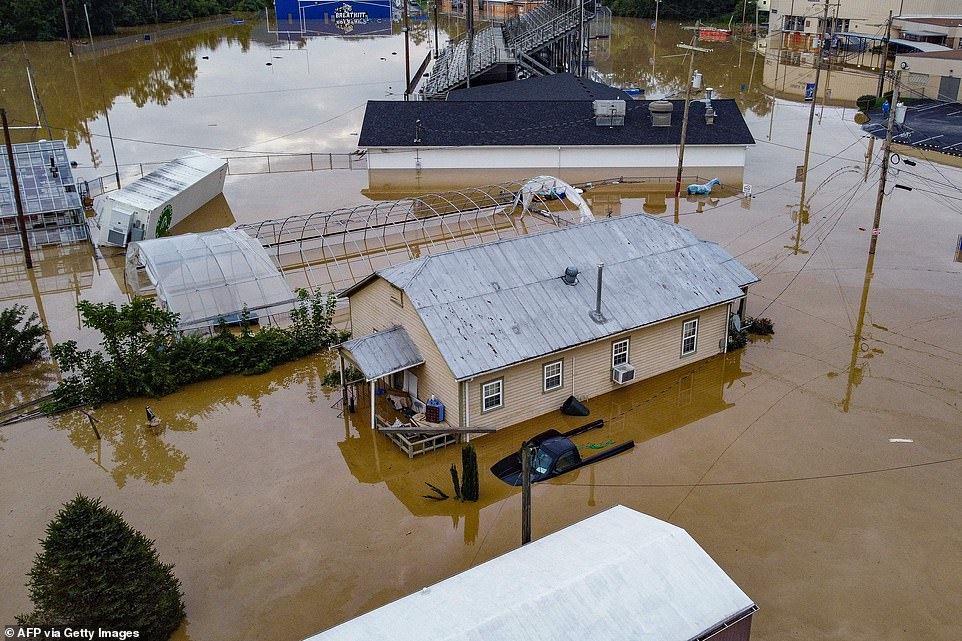 HOMES SUBMERGED: The number of people dead as a result of the deadly weather system reached eight yesterday – but the toll has now reached 16 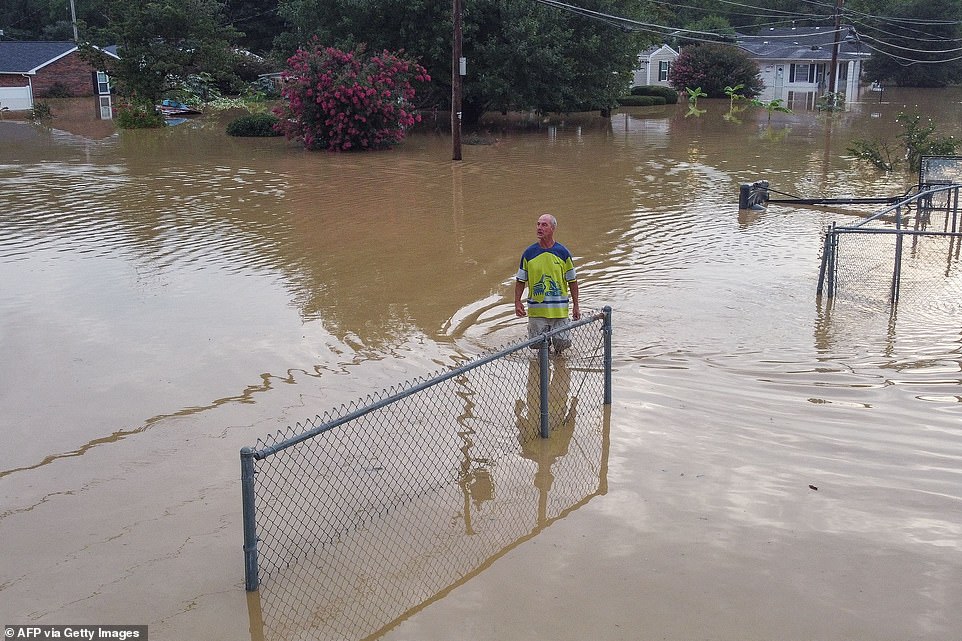 LOST EVERYTHING: A man walks with water up to his knees on the street flooded by the North Fork of the Kentucky River in Jackson, Kentucky on July 28 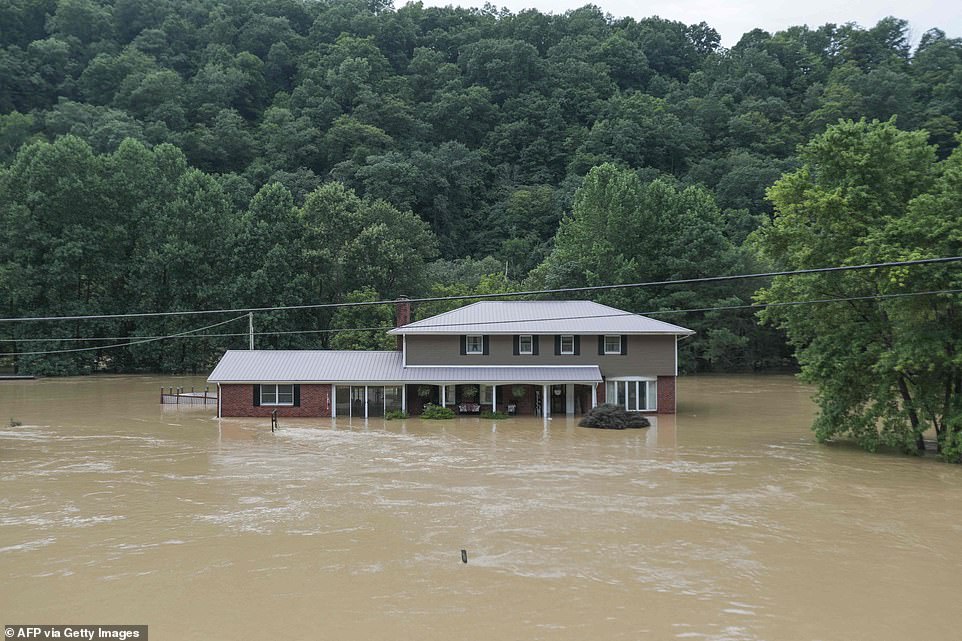 UNDERWATER: A home is almost completely submerged by floodwaters from the North Fork of the Kentucky River in Jackson, Kentucky

Beshear said yesterday: ‘We are currently experiencing one of the worst, most devastating flooding events in Kentucky’s history. Hundreds will lose their homes.’

Among the dead was an 81-year-old woman in Perry County, and the local authorities say several people are unaccounted for.

‘This is an ongoing natural disaster, with more rain expected tonight that could worsen the situation,’ Beshear said yesterday.

On Friday, the flooding left nearly 23,000 households without power in eastern Kentucky and many counties are without water.

There were over 50 air rescues on Thursday and hundreds of boat rescues as teams worked tirelessly to bring people to safety – with the Governor warning that the state was ‘still in search and rescue mode.’

Flash flood warning are in place for Friday in eastern parts of the state, moving into the border with West Virginia.

Floyd County Judge-Executive Robbie Williams said that over 80 people had been rescued since heavy rain began in the area on Thursday – and said that small towns are braced to be completely under water.

He said: ‘I’ve never seen this much water before. I mean it just absolutely poured and we’ve got, you know, some small towns that are completely underwater.’ 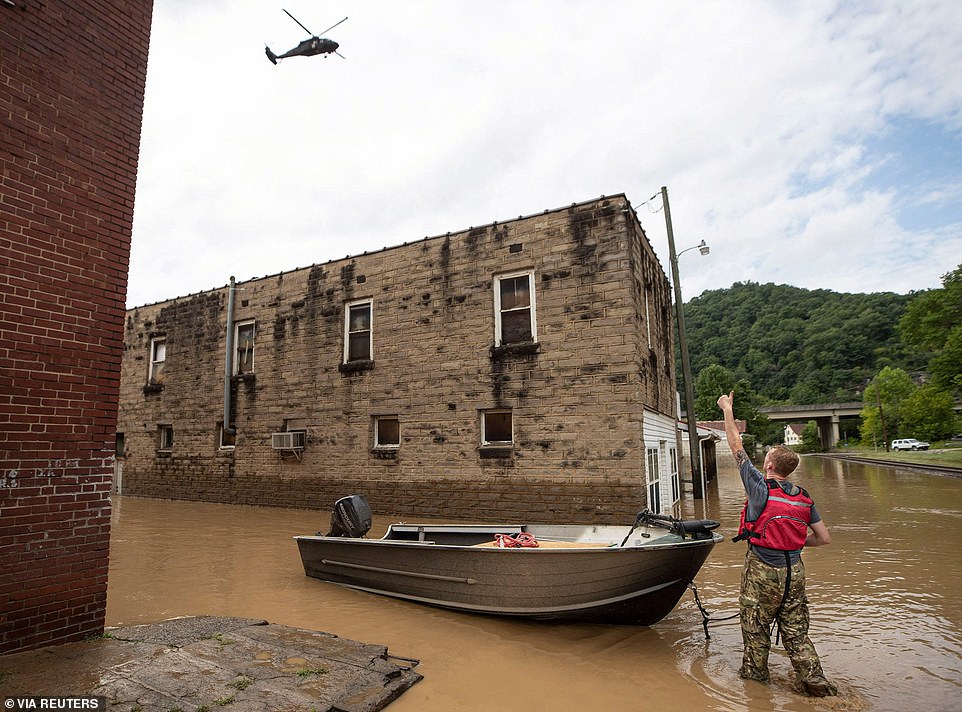 STREETS LIKE RIVERS: James Jacobs signals to a National Guard helicopter flying overhead, following a day of heavy rain in in Garrett, Kentucky 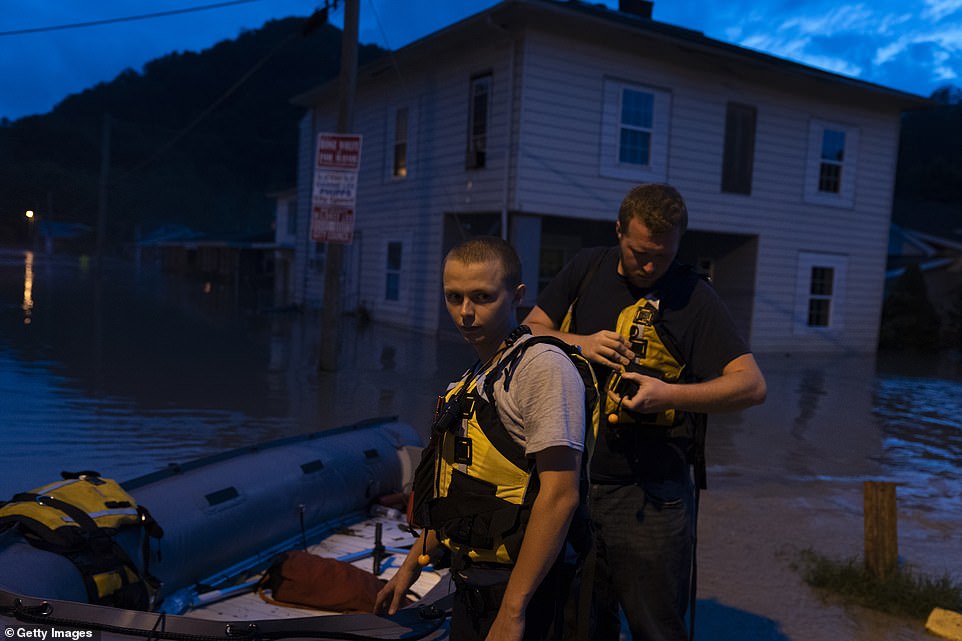 CHILDREN AMONG THE DEAD: Brave members of the fire department brace for rescue missions during nightfall on Thursday as the death toll is expected to double today 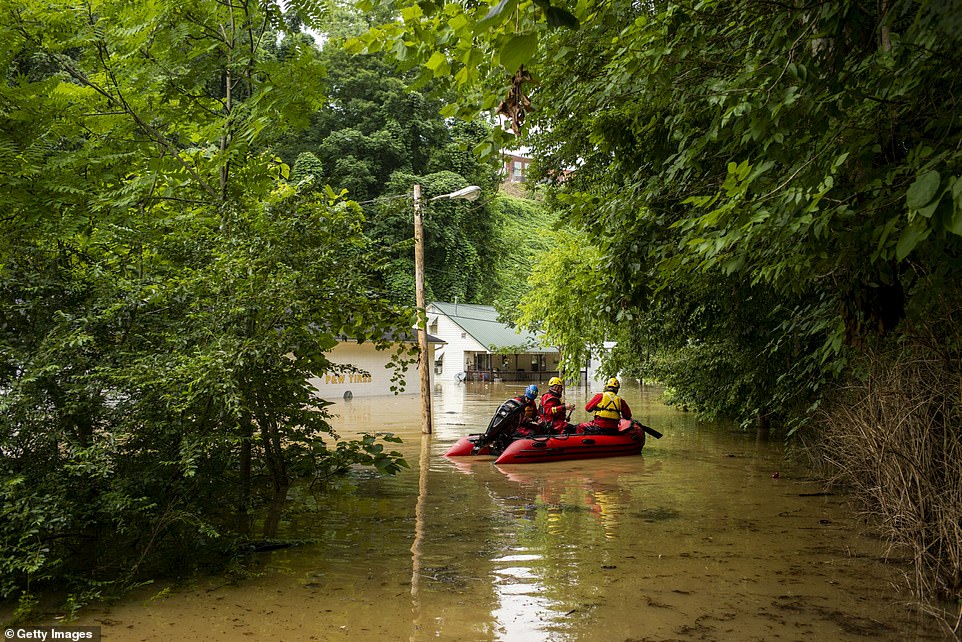 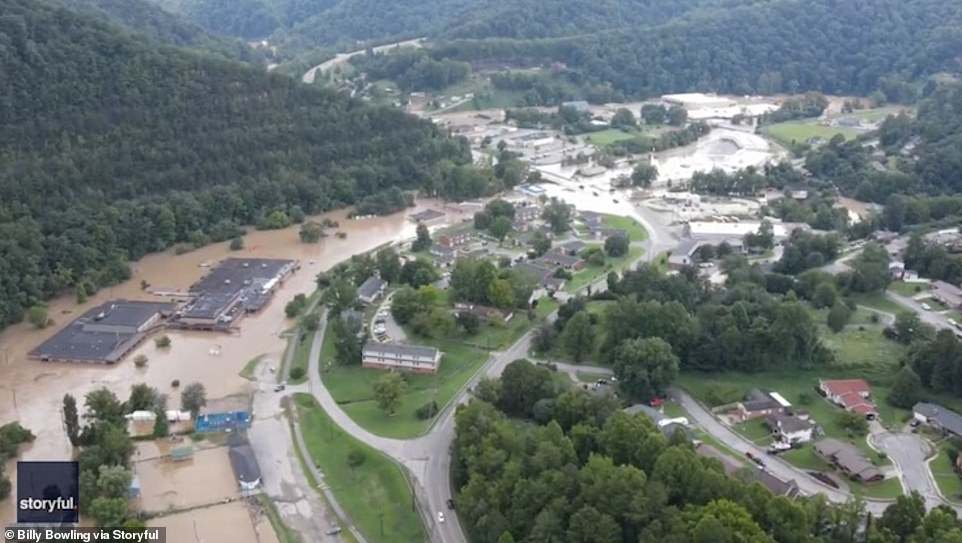 DEATH TOLL RISES: An aerial view of the catastrophic flooding in Whitesburg, Kentucky

Yesterday, the state activated the National Guard and the state police to use helicopters and boats to rescue people marooned among the floodwaters.

Evacuation centers were opened in state parks and other facilities, but Beshear warned that some of the facilities themselves were hard-hit by the storms, and may not have power or some amenities.

In a tweet this morning, Beshear said: ‘Central and Eastern Kentucky remain in a flood watch today. While rain totals are not expected to be as high, flooding still remains a concern due to saturated grounds. Please stay safe and alert, Kentucky.’

Dramatic drone footage over Hindman, one of the hardest hit cities in eastern Kentucky, shows several homes and buildings almost completely submerged by the flooding, with only their rooftops of some visible.

Breathitt County Emergency Management Director Chris Friley, who is overseeing the damage in one of the hardest hits areas, said on Thursday that the damage over the last day went beyond what previous flooding had done in recent years.

‘It’s the worst we’ve had in quite a while,’ he said. ‘There’s several spots that are still not accessible to rescue crews.’

This comes after six children and 14 adults were rescued from a St Louis daycare center after it was inundated with four foot floodwaters – and electrical sockets began to spark after the water touched them.

St. Louis firefighters with Company 29 were able to rescue 10 to 20 people, including at adult camp counselors, at the Cornerstone Institutional Baptist Church in what was described by fire spokesman Nick Dunne as ‘thigh-high water.’

A fire department spokesman said six children were rescued, while the others freed were adults. 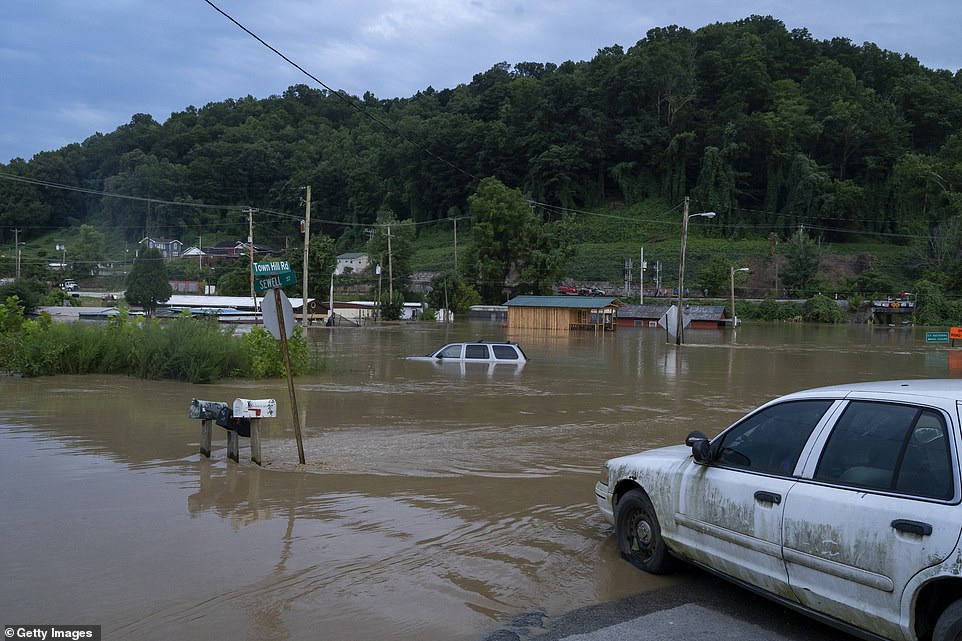 SUBMERGED CITY: Vehicles are seen in floodwaters downtown on July 28, 2022 in Jackson, Kentucky 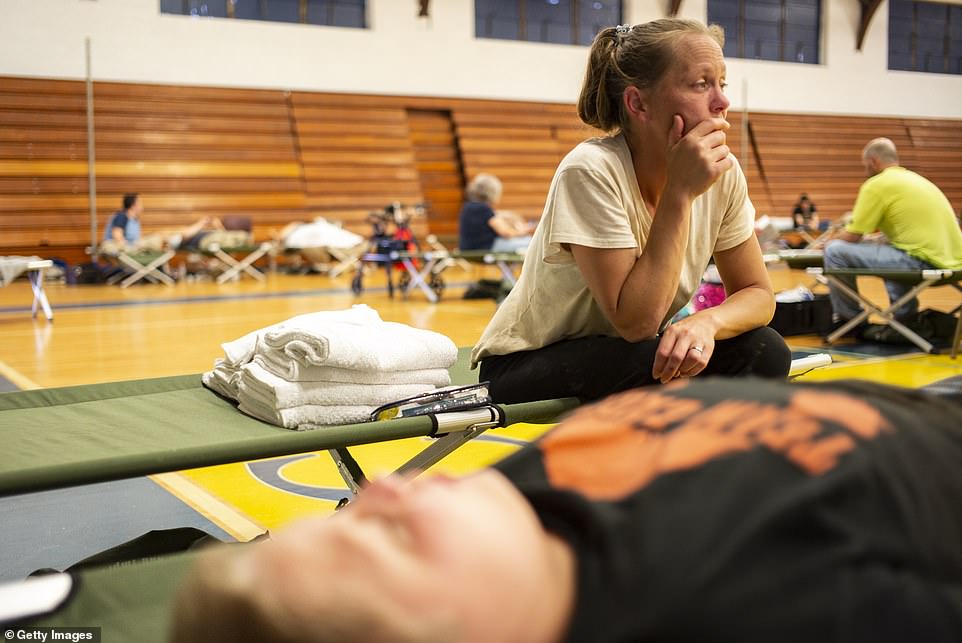 DEVASTATION: April Stivers, 38, of Lost Creek, Kentucky, takes a moment to herself in the Hazard Community & Technical College, where survivors of the major flooding in Eastern Kentucky are being taken for shelter on July 28 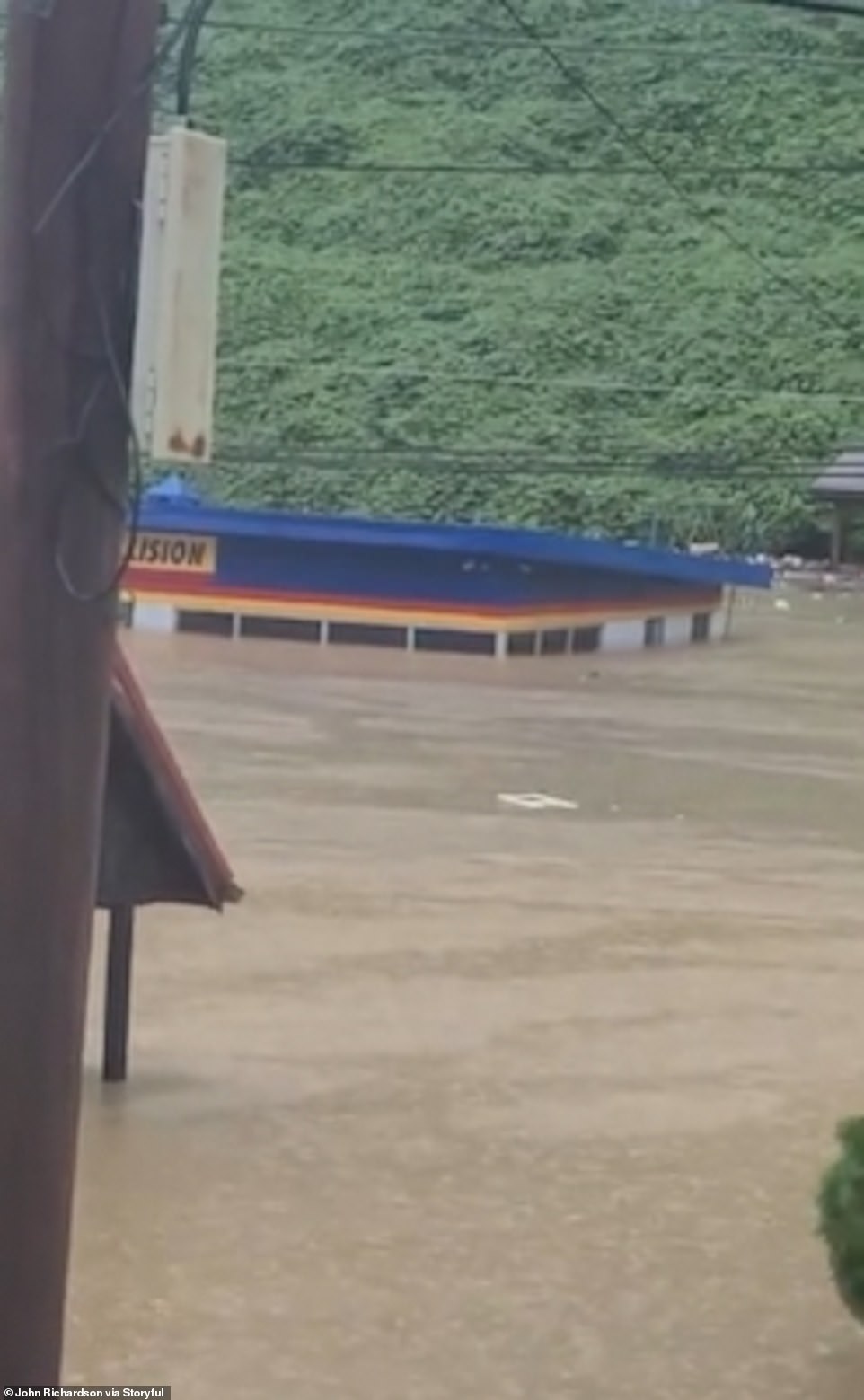 BUILDINGS SUBMERGED: A building can be seen completely under water after the horrific deluge which has so far killed 16 people