‘Every single American community is now a border city’: Republican Kevin McCarthy tears into ‘hypocrisy’ of DC Mayor and White House for using National Guard to deal with migrant crisis ‘Democrats created’ – after refusing to use them for riots

GOP Leader Kevin McCarthy slammed the ‘hypocrisy’ of Mayor Muriel Bowser and the White House considering sending in the National Guard to help handle migrants being bussed into the nation’s capital but not when protesters ransacked the city to demonstrate against police brutality in the summer of 2020.

Bowser wrote a letter to the Biden administration requesting National Guard help dealing with the some-4,000 migrants Texas and Arizona have left at Washington, D.C.’s doorstep. White House press secretary Karine Jean-Pierre said officials are considering the request but Republicans were ‘wrong’ to use migrants as a ‘political pawn.’

‘So they’re concerned about migrants coming to America illegally within their cities – have they ever been to the border?’ McCarthy, R-Calif., told DailyMail.com during a press briefing. 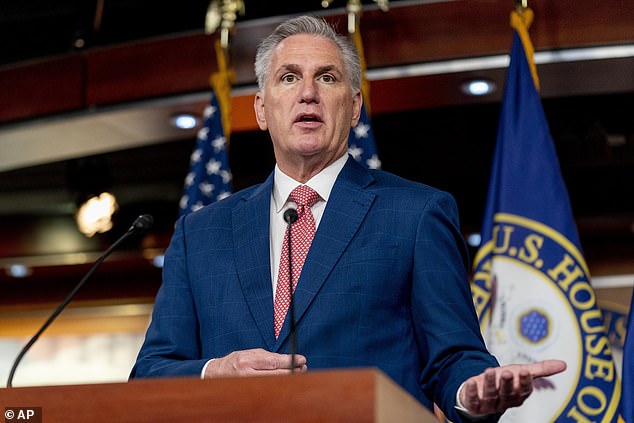 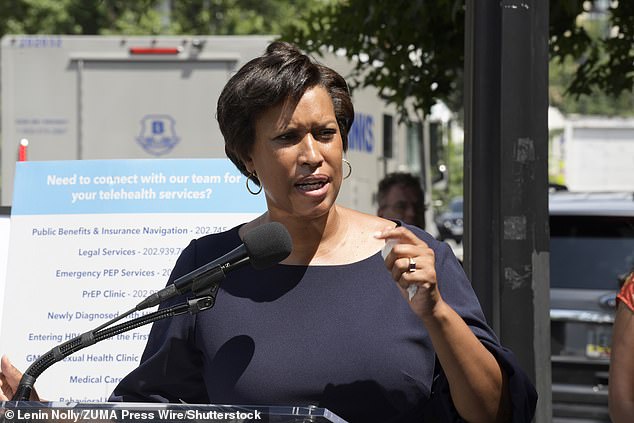 As Mayor Muriel Bowser deemed the matter a ‘humanitarian crisis, the issue quickly spiraled into a political row as Abbott’s office gloated that the nation’s capital was now experiencing the sort of problems that Texans saw every day

‘Every single community in America is now a border city,’ McCarthy said, reiterating a line Republicans have frequently used as border encounters have soared above 200,000 each month since March. The GOP leader noted that fentanyl is now the leading cause of death for Americans aged 18 to 45.

Since the start of the initiative, more than 125 buses have transported 4,800 migrants from Texas border communities the 2,000 miles to D.C. Another 27 buses carrying more than 1,000 passengers from Arizona have arrived in the nation’s capital.

Such figures are only a small fraction of the some-7,000 encounters at the southern border each day.

Nearly 1.75 million migrants have had run-ins with Customs and Border Protection (CBP) at the southern border so far in Fiscal Year 2022 – the most of any previous year at this point. 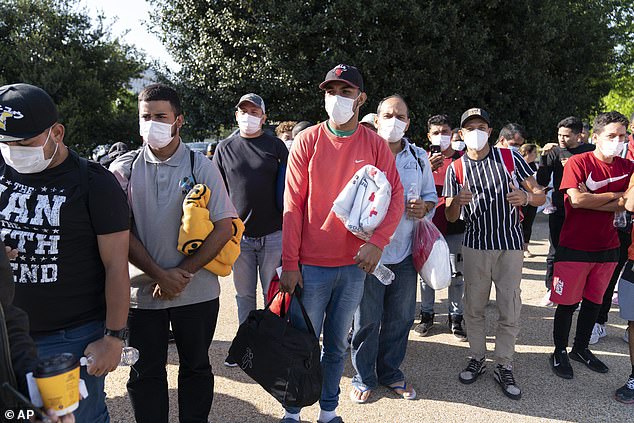 Migrants hold Red Cross blankets after arriving at Union Station near the U.S. Capitol from Texas on buses 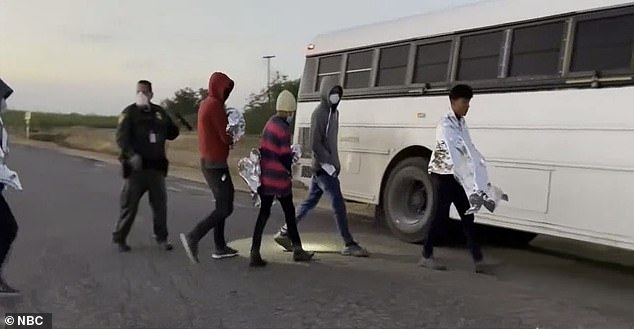 Migrants walk toward buses to be taken to D.C.

As Bowser deemed the matter a ‘humanitarian crisis, the issue quickly spiraled into a political row as Abbott’s office gloated that the nation’s capital was now experiencing the sort of problems that Texans saw every day.

Jean-Pierre said officials talking with Bowser about the request.

‘We have been in regular touch with Mayor Bowser and her team,’ she said at her daily briefing.

‘And I said this before … about Republicans using migrants as a political tool, and that is shameful and that is just wrong.

‘There is a process in place for managing migrants at the border. This is not it.’

She said migrants should be expelled under Title 42, or transferred into custody, or placed in the care of local organizations for proper processing.

‘So what Republicans are doing, the way that they’re meddling in the process and using migrants as a political pawn, is just wrong,’ she added.

Bowser follows New York City Mayor Eric Adams in highlighting migrants being sent to their cities, and blaming Arizona and Texas for the influx.

She said some 4000 people had arrived in the city after crossing the border illegally, creating a ‘tipping point.’

But Texas hit back.

‘Washington D.C. finally understands what Texans have been dealing with every single day, as our communities are overrun and overwhelmed by thousands of illegal immigrants thanks to President Biden’s open border policies,’ Abbott’s office said in a statement.

“If the mayor wants a solution to this crisis, she should call on President Biden to take immediate action to secure the border — something he has failed to do. The true ongoing humanitarian crisis is along our southern border.’

The war of words follows Bowser’s request for the National Guard.

‘The pace of arriving buses and the volume of arrivals have reached tipping points,’ Bowser wrote in a letter to the Biden administration. ‘Our collective response and service efforts have now become overwhelmed.’

‘Tragically, many families arrive in Washington, DC with nowhere to go, or they remain in limbo seeking onward destinations across the United States,’ she added.

The plea for assistance comes after a new NBC News report shows that, according to internal documents, 73 migrants were found living in houses in Northwest D.C. that are operated by human smugglers.

Along with the migrants, according to the documents reviewed by NBC, the agents also found $95,000 in cash and a small amount of cocaine.

Northwest D.C., where the migrants were found, includes some of D.C.’s most affluent neighborhoods, including Georgetown and Kalorama. In 2017, the Obamas purchased a home in Kalorama for $8.1 million.

No addresses or neighborhoods were mentioned in documents on where the migrants were found or how many were living in a single house.