‘Transphobia is not kosher:’ LGBTQ activists protest outside Jewish Leader Conference in NYC ahead of Florida Gov. Ron DeSantis’ speech

Dozens of LGBTQ rights activists gathered outside New York City‘s Chelsea Piers on Sunday holding signs like ‘Transphobia is not kosher’ and ‘Say Gay’ to protest the venue’s hosting of a Jewish Leadership Conference featuring Florida Gov. Ron DeSantis as a guest speaker.

The governor will speak Sunday night about the vibrancy of Jewish life in Florida, and how that could translate to other communities across the country at the Tikvah Fund’s Jewish Leadership Conference, which is being held at the famed Chelsea Piers in Manhattan.

‘There’s a Jewish Renaissance taking place in Florida, and we wanted to hear from DeSantis and what his vision for religious minorities is elsewhere in the country, and that’s why we invited him,’ Jonathan Silver, co-chair of the conference told Bloomberg.

But after the Tikvah Fund, a conservative Jewish organization, announced that DeSantis would speak at the event, the Jewish Museum backed out of a tentative rental agreement to host the conference, and Chelsea Piers later agreed to host the event.

Soon after, LGBTQ groups announced they would boycott the venue for hosting it near the famed Stonewall Inn – which is regarded as the birth place of the gay rights movement.

‘I’m here because this is a sacred ground for human rights,’ Rep. Carolyn Maloney told DailyMail.com at the protest on Sunday, noting that she stood with former President Barack Obama when he designated the Stonewall Inn a national monument.

‘I will always speak out against such injustices and use my power in Congress to fight legislatively these actions,’ she said of the so-called Don’t Say Gay bill that DeSantis signed into law in March.

‘It has no place in New York, no place near Stonewall and certainly nowhere near this Chelsea community,’ Maloney continued, adding: ‘It’s an outrage that they came here.’

Chelsea Piers has since said it will donate the money it receives from the conference to LGBTQ organizations. 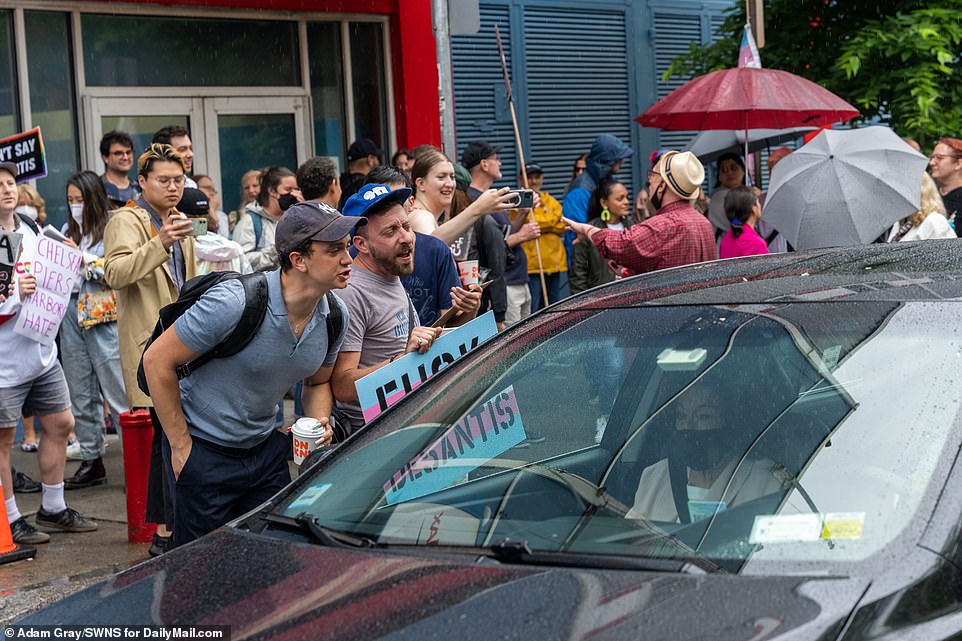 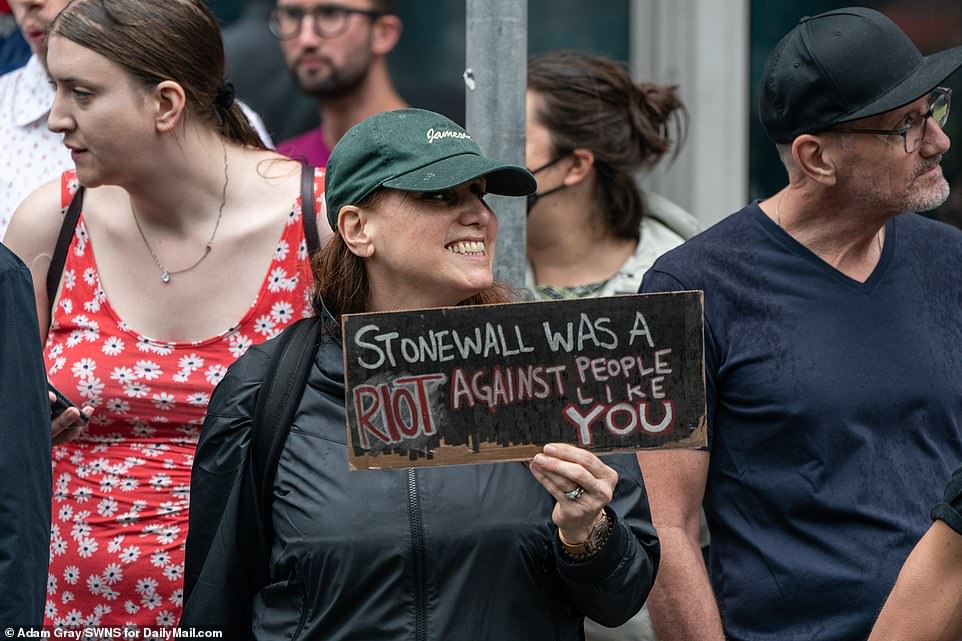 Many of the protesters held up signs, like this woman who wrote: ‘Stonewall was a riot against people like you’ 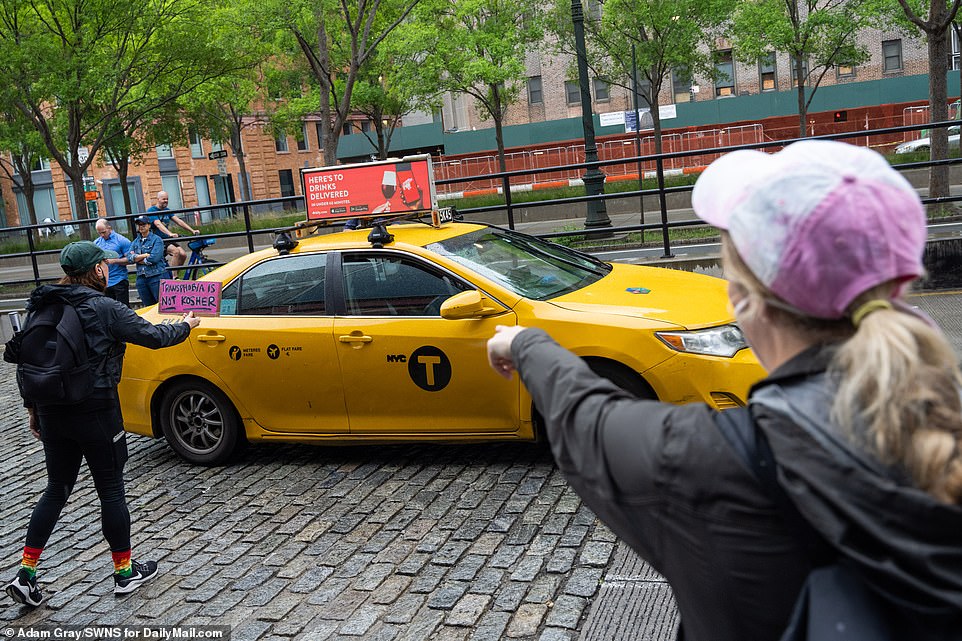 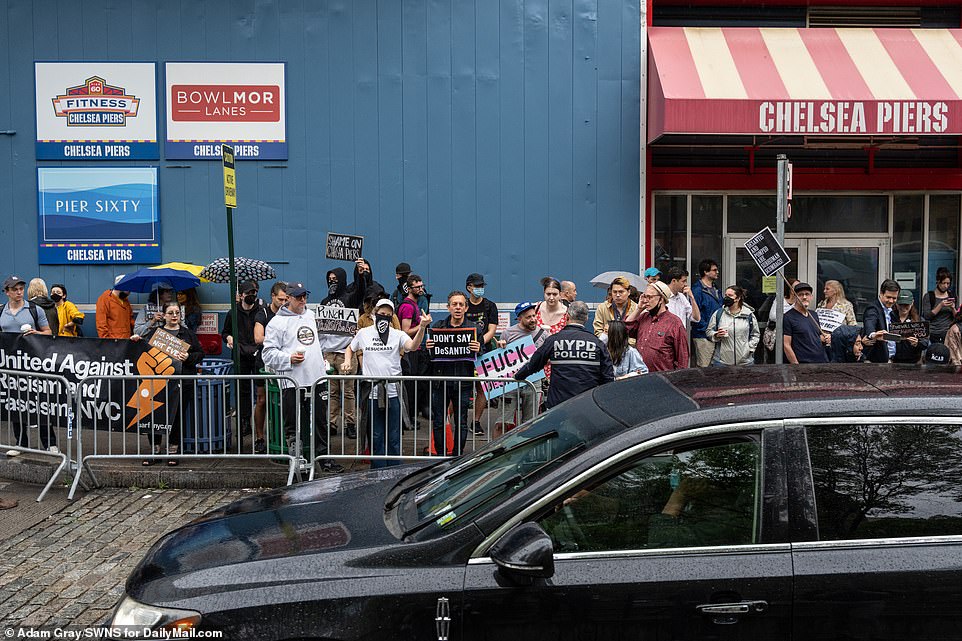 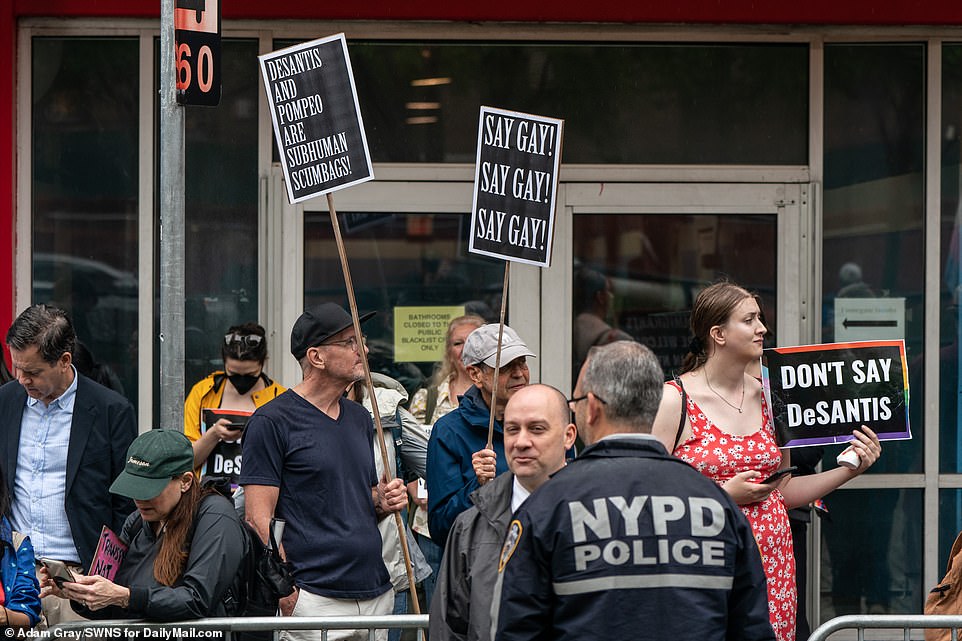 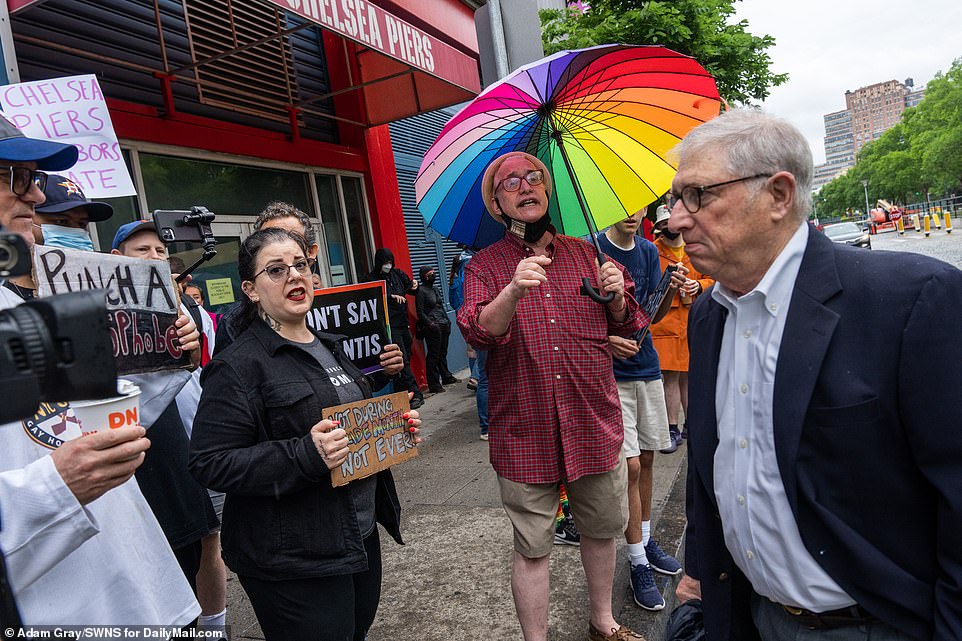 One of the protesters, holding a rainbow umbrella, said he thought DeSantis should ‘look inside and review his own soul’ 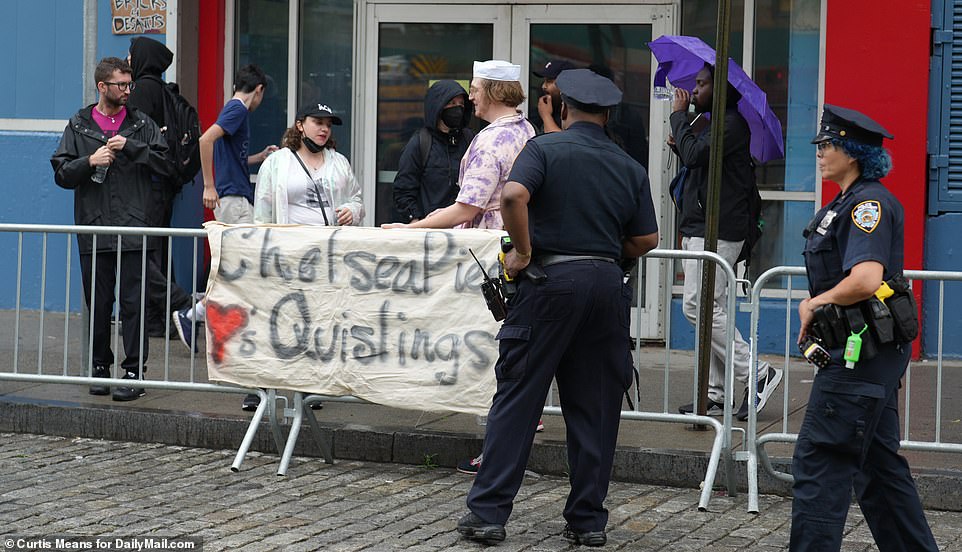 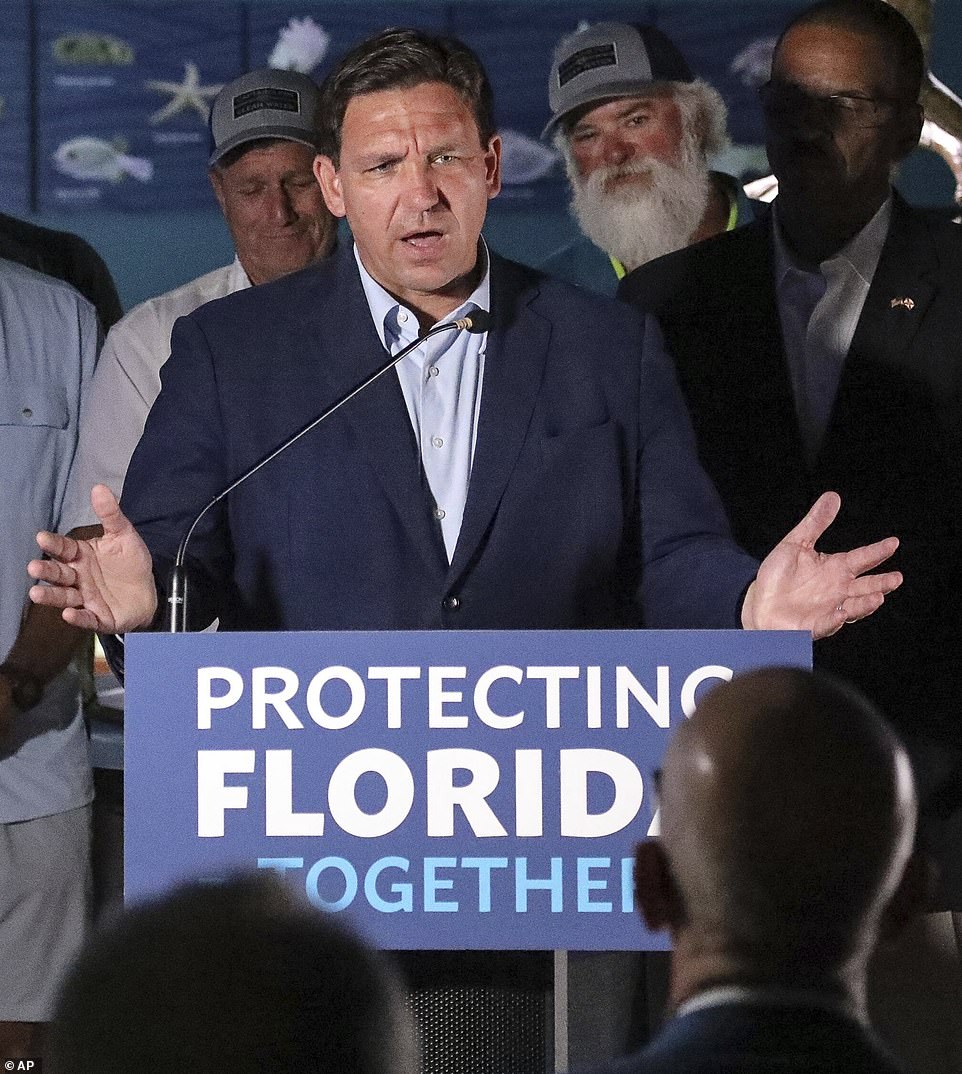 DeSantis, a Republican, has faced continued backlash from LGBTQ rights groups since he signed into law a bill that prevents teachers of students in kindergarten through third-grade from discussing issues pertaining to ‘sexual orientation’ or ‘gender identity.’ Any teacher who breaches its regulations can be sued by parents.

The law has been heavily criticized over the past few months, with opponents dubbing it the ‘Don’t Say Gay’ bill.

And on Sunday, protesters gathered between West 19th and 20th Streets in Manhattan as Jewish Leadership Conference members arrived in cabs, with some concealing their faces with their jackets as they ran by.

Many protesters held up signs with messages ‘Don’t Say DeSantis,’ ‘Stonewall was a riot against people like you’ and ‘Chelsea Piers harbors hate.’

Some of the protesters even implored those arriving to turn around and go home, AM New York reports, as they could be heard chanting ‘Boycott Chelsea Piers,’ and ‘Shame.’

‘Today, Chelsea Piers has let the LGBTQ community down in the biggest way imaginable,’ he said. ‘They are letting the most anti-LGBTQ elected official in the United States of America use this pier as a venue to spread his hatred and we reject that.’

He went on to claim that DeSantis was using the event to test a run for president.

‘DeSantis is clearly trying to raise money here in New York City for that speculative presidential bid,’ Holyman told Bloomberg. ‘He’s stirring up a hateful set of the Republican party who want to see LGBTQ people erased from textbooks, schools, if not daily public life entirely.’

Another protester also told DailyMail.com that DeSantis ‘needs to look inside and review his own soul.’ 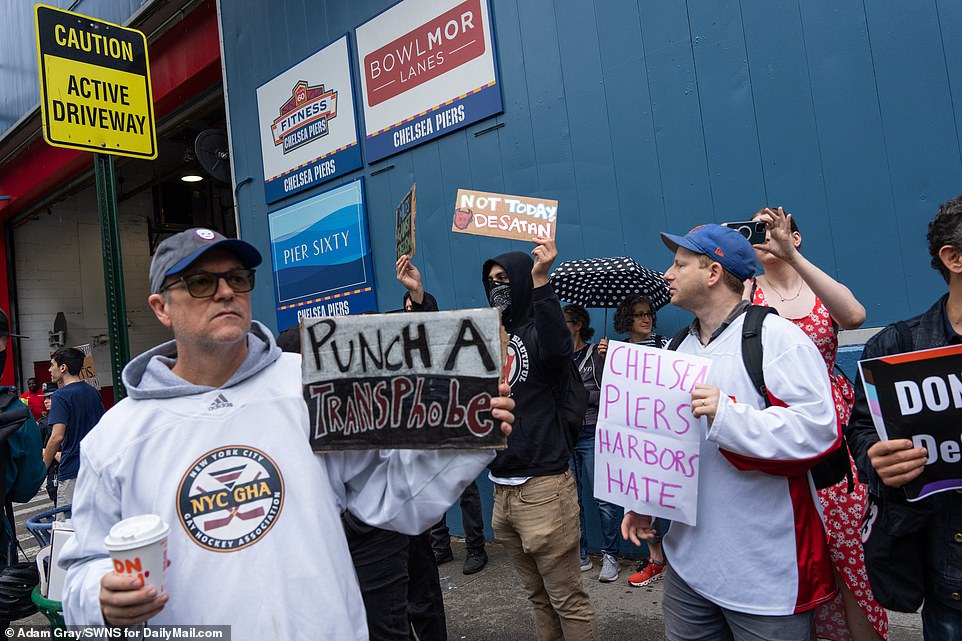 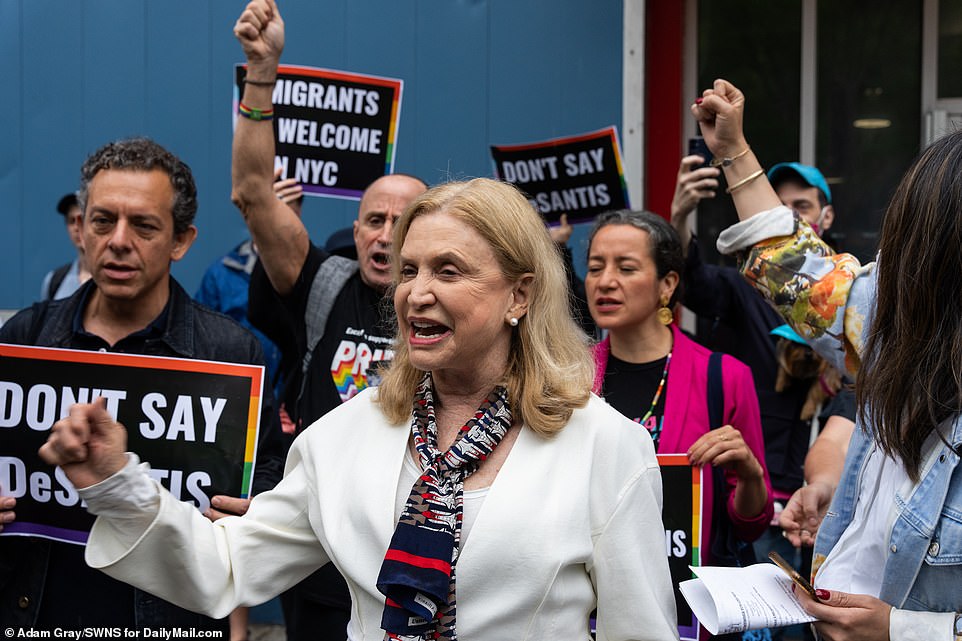 Rep Carolyn Maloney chanted along with the protesters on Sunday, saying ‘It’s an outrage that they came here’ 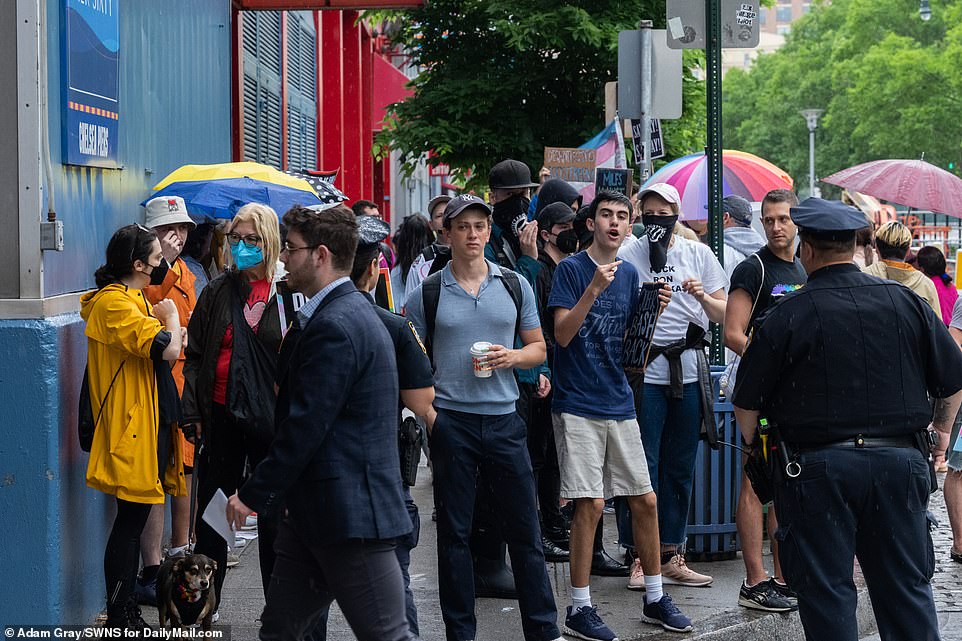 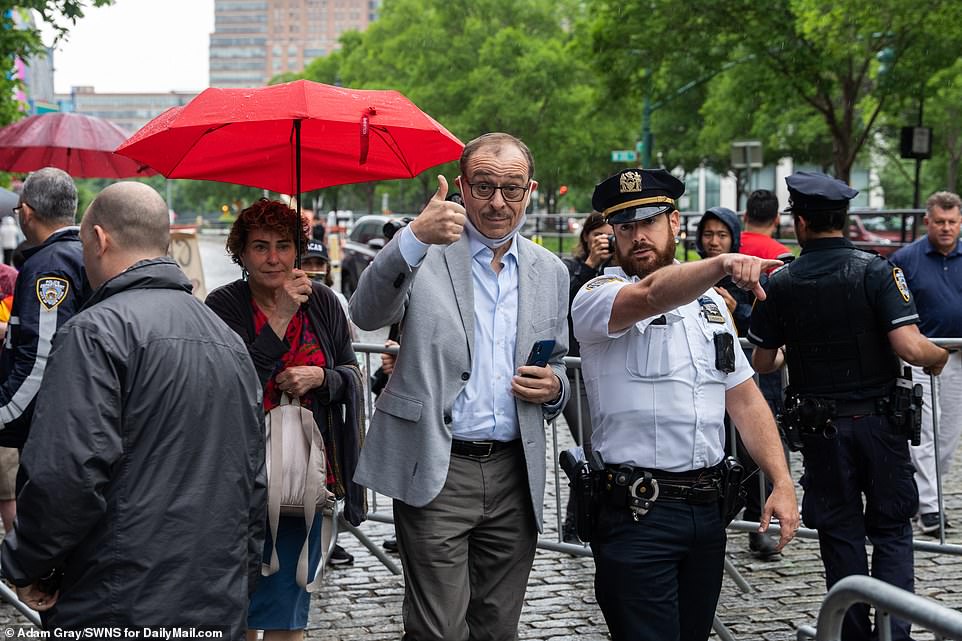 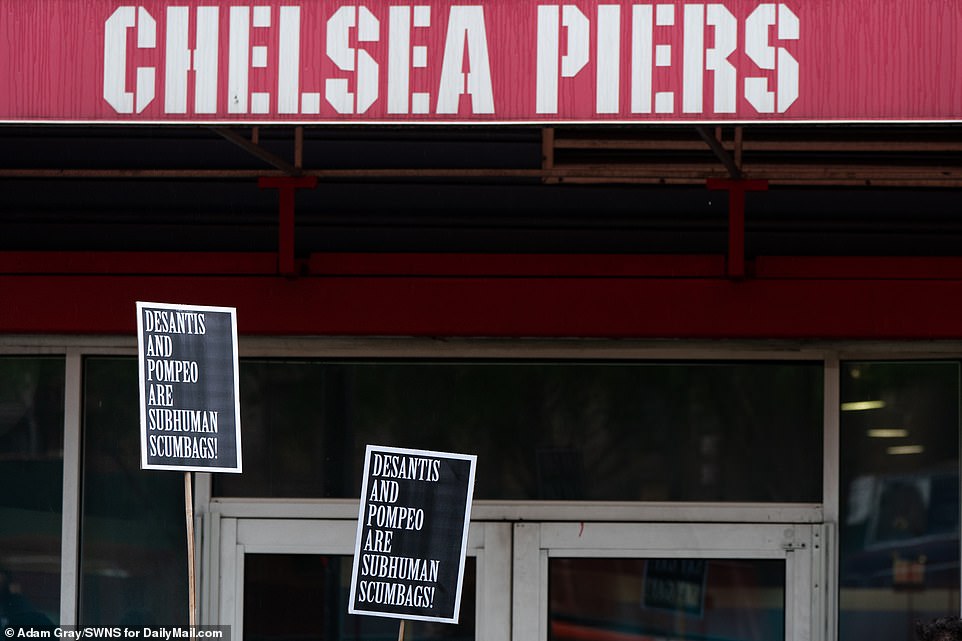 Amid the backlash, Chelsea Piers announced on Friday that it ‘could not disagree more strongly with many of Ron DeSantis’ actions in office,’ and will donate the proceeds from the event to LGBTQ organizations

The protest was organized by a coalition of groups – including United Against Racism and Fascism NYC, Rise and Resist NYC, The Queer Liberation March, and pro-Jewish org Outlive Them NYC – who called on citizens to join a planned protest outside Pier 60 Sunday morning.

The call to arms cited how organizers had already asked Chelsea Piers to call off the event due to DeSantis’ involvement – but were rebuffed.

The post then implored supporters of the cause to ‘join us in protest’ outside the venue Sunday, ‘at 8am sharp.’

By Friday, staff at Chelsea Piers reiterated that they would not be canceling the event, citing how it does not police the views expressed by those who rent its event spaces.

In an email to members of the storied entertainment and sports complex, brass wrote: ‘We could not disagree more strongly with many of Ron DeSantis’ actions in office.’

The unsigned message went on to assert: ‘One response to abhorrent behavior is to counter it with positive action.’

The group then said it would donate the money it received from the event to ‘groups that protect L.G.B.T.Q.+ communities, and foster and amplify productive debates about L.G.B.T.Q.+ issues’ to show support for the gay community.

That caveat, though, was not enough to appease the woke masses calling for the event to be cancelled – after a previous protest campaign saw The Jewish Leadership Conference lose one New York venue due to DeSantis being on its list of speakers. 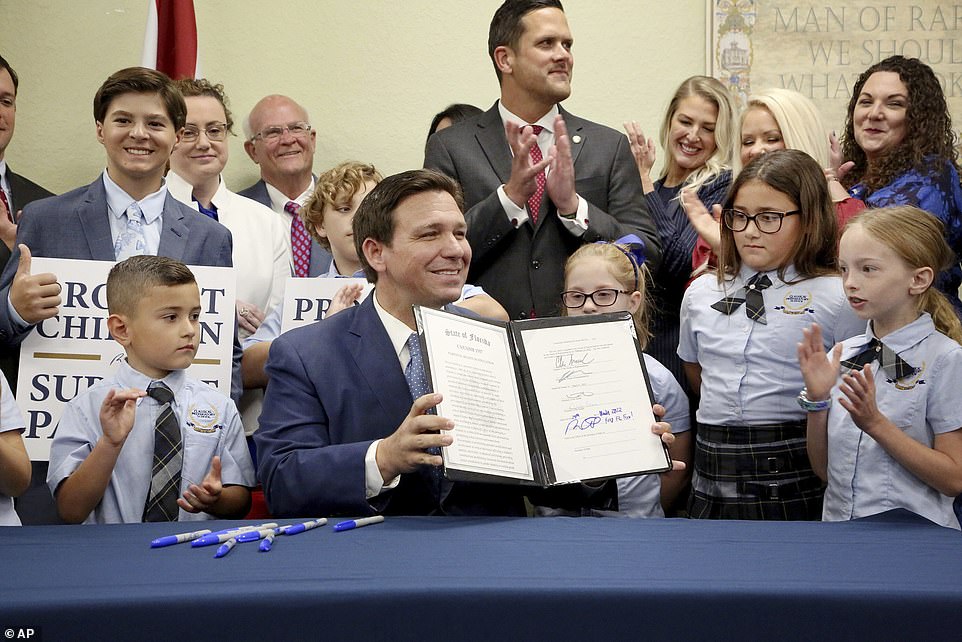 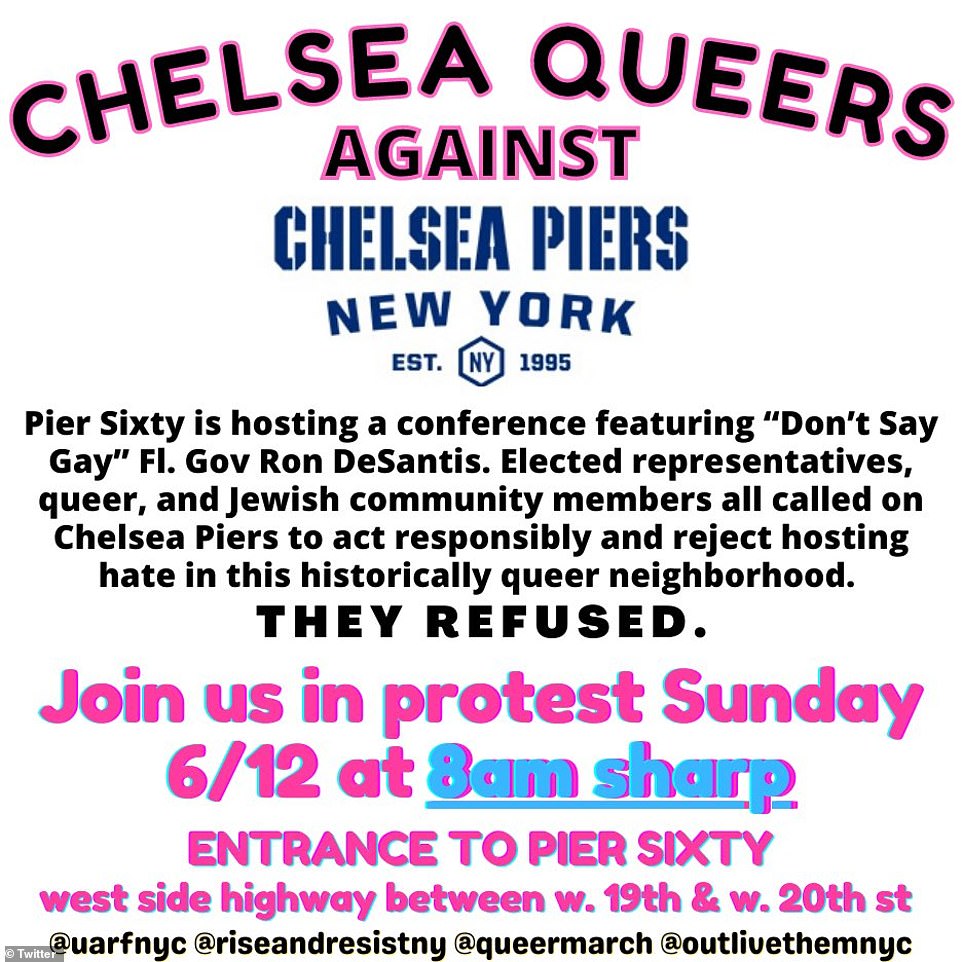 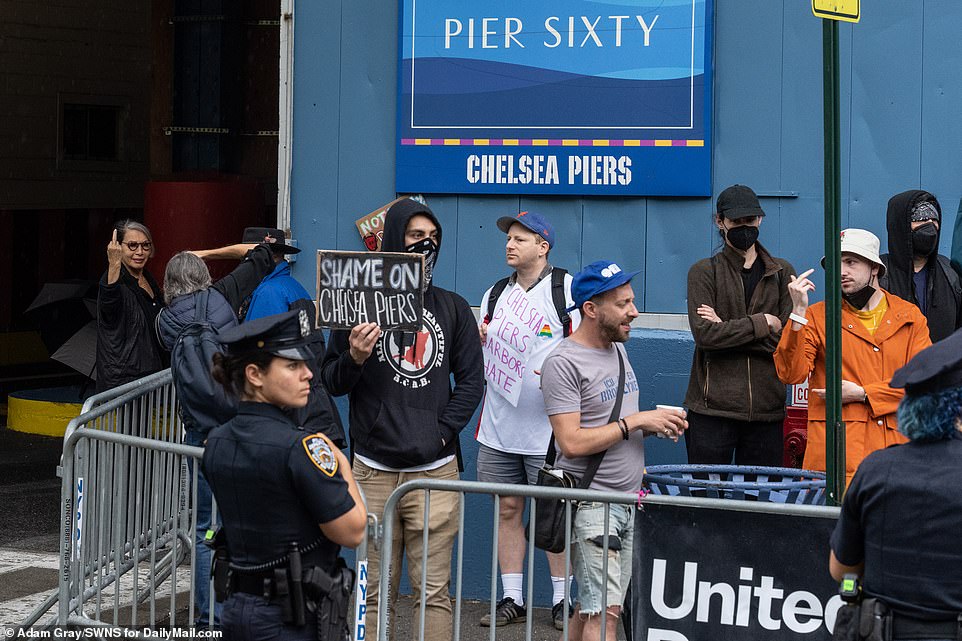 What is the Parental Rights in Education law?

They say the bill’s aim is to ’empower parents’ in their children’s education, and make teachers recognize the distinction between ‘instruction’ and ‘discussion.’

‘What we’re prohibiting is instructing them in a specific direction,’ Baxley said about how teachers lead students in a classroom.

‘Students can talk about whatever they want to bring up, but sometimes the right answer is, ”You really ought to talk to your parents about that.”’

It states that ‘classroom instruction by school personnel or third parties on sexual orientation or gender identity may not occur.’

Part of it applies to kids in kindergarten through third grade, while a vague portion bans all discussion of ‘sexual orientation or gender identity’ in a ‘manner that is not age appropriate or developmentally appropriate.’

It also requires districts to ‘adopt procedures for notifying a student’s parent if there is a change in the student’s services or monitoring related to the student’s mental, emotional, or physical health or well-being,’ something LGBTQ advocates argue could lead to students being outed to their parents without the student’s knowledge or consent.

The state House approved the bill in February. It was passed in the state Senate on March 8 in a 22-17 vote. DeSantis signed it into law on March 28 and it will come into effect on July 1.

‘The bottom line is Chelsea Piers is providing a venue to propagate hate toward the LGBTQ community and that is unacceptable on many levels, including that it is Pride and that it is in Chelsea, the heart of the community,’ the politician said.

The New York City Gay Hockey Association, which has been based at Chelsea Piers for more than two decades, has also demanded the event’s cancellation, penning a letter to brass saying members felt ‘disappointment, sadness and even repulsion’ over its decision to host the governor.

‘The Museum of Jewish Heritage declined to host this event,’ the group’s board wrote. ‘We wish Pier 60 had approached this with the same scrutiny and reverence for the community it serves, as well as the larger Chelsea Piers community.’

LGBTQ advocacy group GLAAD, meanwhile, said it would ‘refrain from future events’ at the complex, ‘given the platform that Chelsea Piers is giving to one of the most anti-LGBTQ and dangerous politicians today.’

The Ali Forney Center, a group that works with homeless LGBTQ youth in New York, announced Friday it would no longer be holding an event at Chelsea Piers next month.

‘People are saying this issue is about freedom of speech, but it is not,’ the group’s president, Alex Roque, wrote in a statement.

Rouque went on to assert that the decision was ‘in response to DeSantis silencing freedom of speech in schools.’

Roque added the event was ‘a triple insult’ due to it being held during Pride Month in a predominantly gay neighborhood, in a complex built on a site that holds marked importance to the city’s gay community.

Prior to Chelsea Piers’ construction in the 1990s, the site was originally used for the docking of ocean liners and other large ships in the early 1900s.

However, after falling into disrepair in the 60s, the site soon became as a de facto refuge for homeless LGBTQ youth, as well as notorious meeting place for gay men – soon becoming synonymous with gay culture in the city.

However, unlike The Museum of Jewish Heritage, staff at the Piers have remained defiant in the face of those calling for the event – and the venue as well – to be cancelled.

DeSantis has also remained similarly defiant, with his office asserting the politico will go through as planned with the appearance, citing the governor as a champion of religious liberty and a friend of Israel.

‘He has defended religious Floridians and their right to assemble and practice their religion in spite of attempts from the left to lockdown places of worship,’ a DeSantis spokesperson told The New York Times Friday.

‘The governor will always stand up for what is right and will not be deterred by the radical left.’ 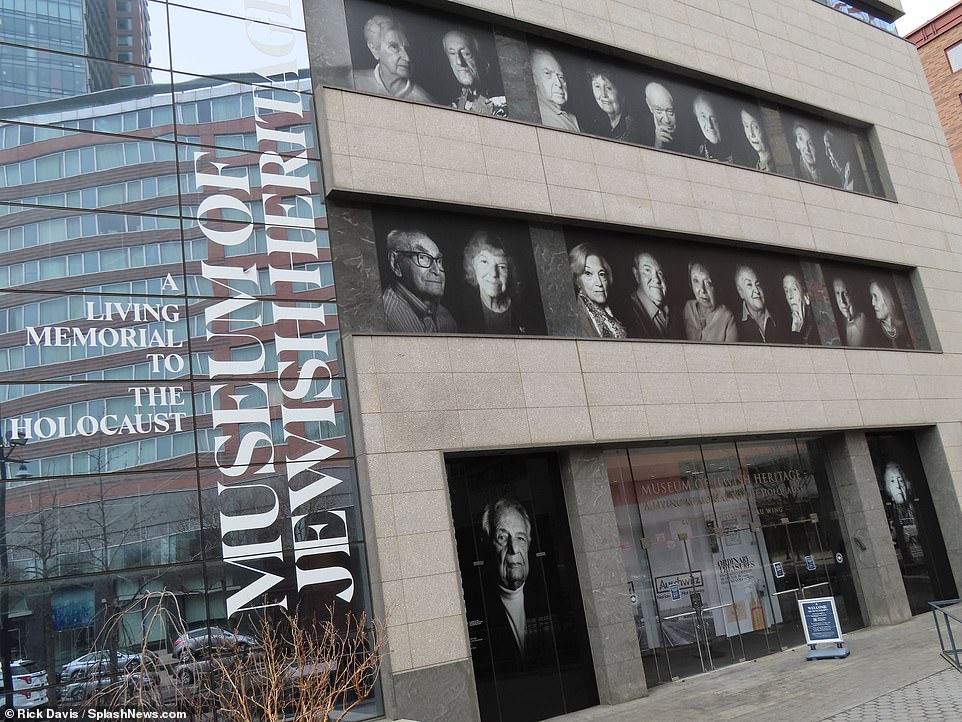 The Manhattan Museum of Jewish Heritage initially banned DeSantis from speaking at an event because he ‘doesn’t align’ with their values after signing the so-called ‘Don’t Say Gay’ bill.

Elliott Abrams and Eric Cohen, the CEO of Tikvah and co-chairmen of the Jewish Leadership Conference, called out the institution for canceling the June 12 conference where the Florida Governor was due to speak.

They slammed bosses in a May 5 Wall Street Journal piece that claimed staff would not air views of someone who did not align with their ‘message of inclusivity’.

But on Friday the museum hit back and claimed the story was ‘a factually inaccurate opinion piece about a proposed rental event’.

It blasted the Tikvah Fund for ‘trying to create a fight where none exists’, adding it was a ‘contractual and logistical decision’ rather than a ‘free speech or censorship’ one.

In a scathing thread about the discussions on Twitter, the museum said: ‘Let us be clear: No one was banned or cancelled. No contract with the Tikvah Fund was ever signed for this rental event to be held at the Museum and no deposit was ever made.

‘This is not a free speech or censorship issue. The Tikvah Fund is trying to create a fight where none exists. This was simply a contractual and logistical decision.’

Meanwhile, DeSantis has continued his war on the woke in recent months, most recently threatening to go after parents who take their children to Drag shows.

This week, the governor also threatened to deploy Florida’s CPS on parents who take their children to such shows, after video surfaced of elementary school-aged kids dancing alongside men in drag with parents present at a Dallas gay bar.

DeSantis’ signing of the of the contentious Parental Rights in Education bill also sparked a heated battle against Disney after the company opposed the change, with spurring the governor to strip the company of its special tax status in Florida last month.

The guidance also saw DeSantis pitted against President Biden, who branded the guidance as ‘hateful’ earlier this year.

The Parental Rights in Education Bill is now set to go into effect July 1.