Life in the fast lane! Sloth catches the BUS in Brazil after being rescued by kind-hearted driver

Commuters on a city bus in Brazil watched in astonishment as the latest passenger clambered on board – a sloth.

Passengers were amazed to find the slow-paced sloth enjoying a taste of life in the fast lane after being helped on board by the animal-loving driver.

Ronaldo Santana and his conductor Marcio Albuquerque said they rescued the animal after spotting it close to traffic on the motorway in the north-eastern city of Recife, Brazil, on Monday. 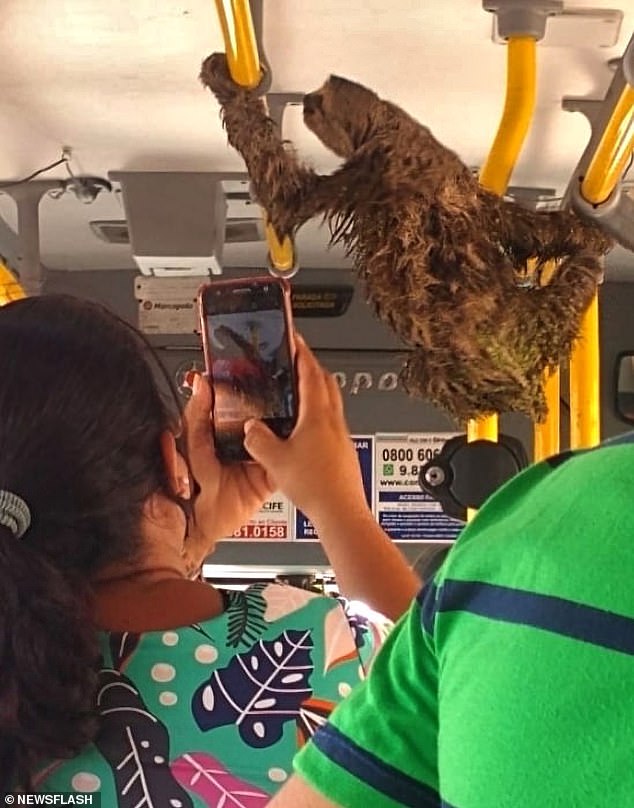 It’s quicker than walking: The sloth appeared to be enjoying the change of pace as he travelled on the bus in Brazil

‘I pulled the bus over at the stop and I saw something moving,’ Santana told local media. ‘We then realised it was a sloth walking towards the cars.’

The pair, not wanting the slow-moving sloth to be hit by vehicles, allowed the sloth on board.

With their new, rather unusual, passenger in tow, they set off to the next station where police officers were on hand to help.

Santana, who has spent 17 years working as a bus driver, said it was the first time he had seen a sloth in the road.

‘On that day, by chance, I was on duty and I took that bus,’ he said. ‘Just as well it happened so we could save the little creature.’ 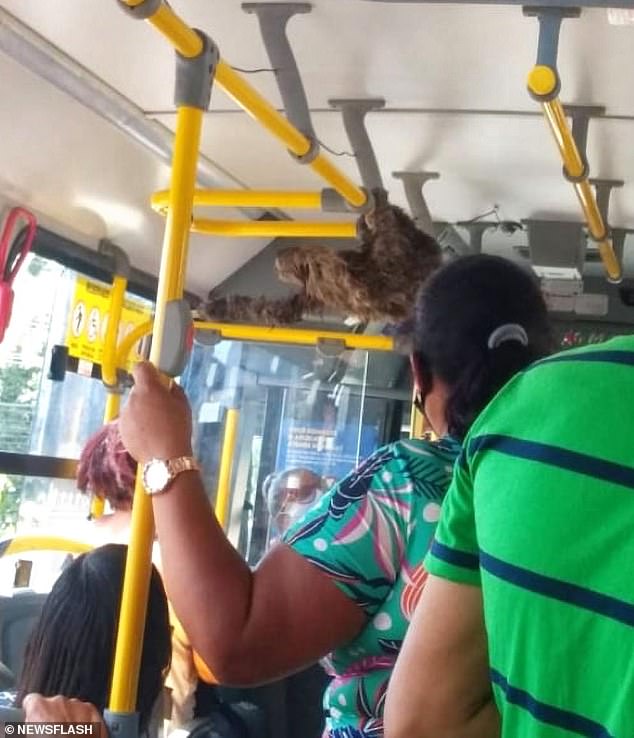 Baffled passengers were amazed to find the animal climbing up the poles and handlebars of the bus in Recife, Brazil

Albuquerque told local media he did not hesitate to grab the long-clawed animal in order to rescue it.

‘I love animals, I always carry food, water and some remedies for wounds to give to street animals,’ he said.

‘When I saw the sloth, I even thought about trying to return it to the nearby woods, but I got scared that someone would snatch it and I thought it better to take it to the police.’

With the sloth on board, it climbed up onto the handrails – causing a flurry of activity by passengers who wanted to get a better look of the animal.

‘The passengers found it curious, everyone was taking photos,’ Albuquerque said.

‘I’d seen many agoutis and caimans around, mostly at night, but it’s the first time I’ve seen a sloth.’

When the bus, which had been travelling from one side of Reclife city to the other, arrived at its destination, Santana and Albuquerque handed the furry passenger over to police officers to return it to the wild.

‘I’m thrilled, I thank God for the opportunity to save this animal, Albuquerque added. ‘People should take greater care of nature. The deforestation in that area is terrible. So many animals die there, it pains my heart.’