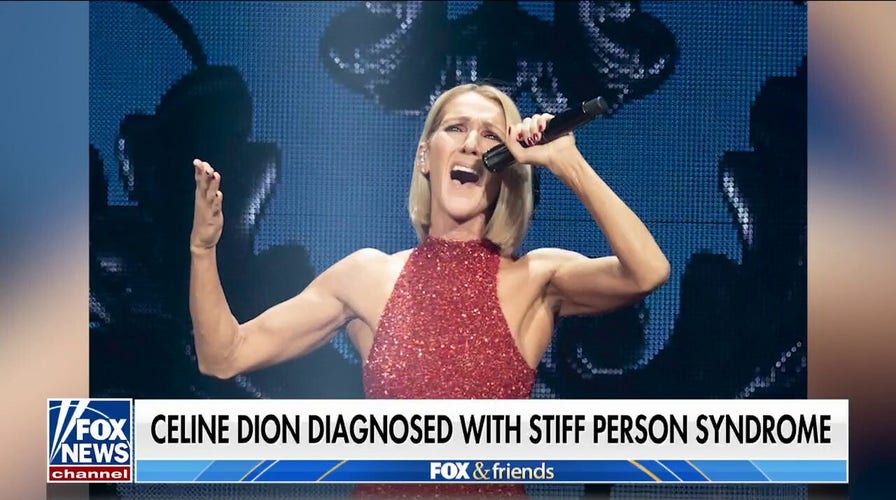 Speaking out on Instagram on Dec. 8, the 54-year-old Canadian star said, “As you know, I’ve always been an open book. And I wasn’t ready to say anything before — but I’m ready now. I’ve been dealing with problems with my health for a long time.”

She added, “And it’s been really difficult for me to face these challenges and talk about everything that I’ve been going through.”

ALZHEIMER’S EXPERIMENTAL DRUG MAY SLOW PROGRESSION OF DISEASE, BUT THERE ARE RISKS; EXPERTS

She went on to mention SPS — which consists of progressive muscle stiffness (rigidity) and episodes of painful muscle spasms, according to Rarediseases.org.

The severity and progression of SPS varies from one person to another. 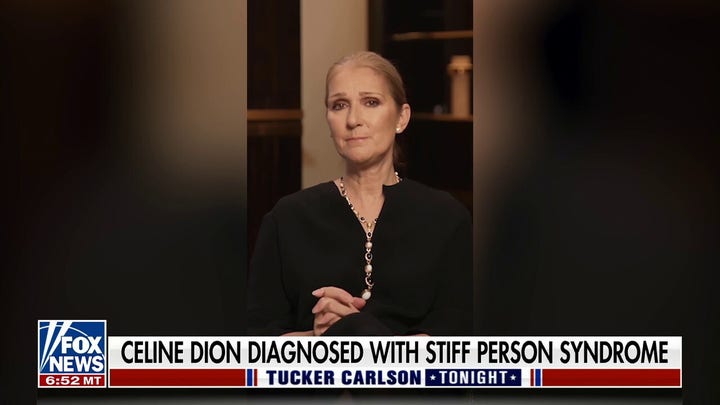 Yet if left untreated, it can potentially progress to “cause difficulty walking and significantly impact a person’s ability to perform routine, daily tasks,” they note.

Schartel, a husband, father, grandfather and great-grandfather, told Fox News Digital in a phone interview that his health odyssey began when he was first diagnosed in 2017 with osteoarthritis (OA) in his hands. 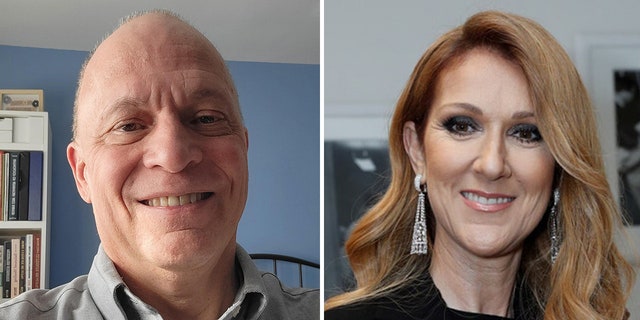 Steven Schartel, shown on left, and singer Celine Dion. Both have been diagnosed with SPS, a rare and progressive neurological disorder.
(Steven Schartel)

“I do have OA in almost every joint in my body, exacerbated by the muscle contractions of SPS,” he said.

Schartel began taking Cymbalta (an antidepressant and nerve pain medication) for the OA, which helped with symptoms, he said. He also began noticing severe stiffness in his back in 2018.

“I had to pull myself up and out of the seat. Something was wrong.”

“At that point, I can’t get out of the car after an hour car ride to work,” he said. “I was like, ‘What is going on?’ I had to pull myself up and out of the seat. Something was wrong.”

‘In such a dark place’

Schartel was on the maximum dose of Cymbalta at the time, he said, but still suffering symptoms of severe pain and stiffness.

Medical professionals tried several things. He was prescribed Lyrica for fibromyalgia, though he later said a firm “no” to opioids.

“I did Spartan races, Tough Mudders, all that stuff.”

As he did his own research, Schartel “came across a bunch of autoimmune diseases including SPS,” but wrote it off “because it was too rare,” he said. 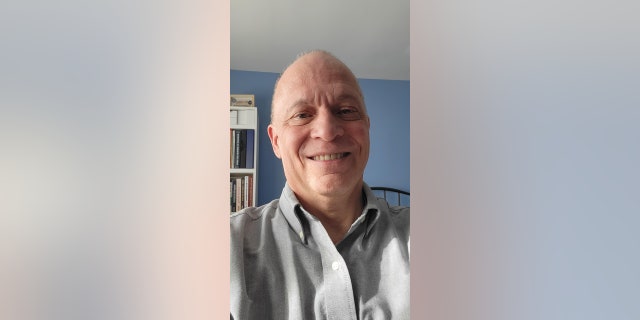 Steven Schartel said he was diagnosed with SPS on May 14, 2022. Once he heard the news, it changed everything: "My fate was sealed," he said.
(Steven Schartel)

“She took 45 minutes with me in my despair, and it was sheer desperation. She saw it, she took her time and was empathetic — and she clicked the box for an SPS blood test, a GAD65 antibody blood test,” said Schartel.

US HOSPITALIZATIONS RISE AS RESPIRATORY VIRUSES CONTINUE TO SPREAD: REPORT

“Eighty percent of people with SPS have a positive test result,” he added.

A positive test result came in last May 14, he said, changing everything. “My fate was sealed.”

The disease is particularly difficult, said Schartel, because he was very physically active before the onset of symptoms. He even competed in obstacle course competitions.

He said that today, he “looks at a flight of steps and says, ‘Do I really have to go to the bathroom that bad, or can I wait?’”

SHOULD YOU DRINK WATER BEFORE BED? EXPERTS CHIME IN

He was active in mountain-climbing, too, wearing weighted vests, holding free weights and climbing seven miles in an outing. “Now I can’t climb steps without holding on and using a cane,” he said.

As a “conditioned athlete,” he understands that now “my feet and my body move with my head.” He needs “three points of contact” at all times to stay safe, he added.

“I do not trust my legs to catch me if I lose my balance,” he said. 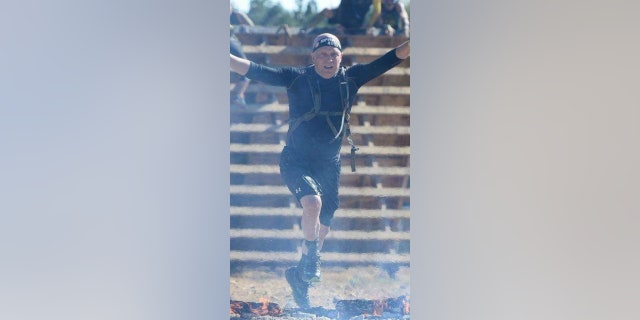 Steven Schartel of Pennsylvania, during his time of full health, is shown competing in an extreme sports event.
(Steven Schartel)

“My quality of life is tolerable,” he said.

“I have a few hours in my wood shop, which was going to be part of my retirement plan — hours in there making and then selling the things I make.” Today, he said he can last “about three hours” in the wood shop.

Schartel has endured uncaring doctors and a “lack of empathy” from some medical professionals, he said.

He works now with a doctor who is “probably the number-one or number-two specialist in the world” for SPS, he said. Yet the current lack of understanding of the syndrome among medical professionals remains challenging, he also said.

Two weeks ago, during an IVIG treatment, he was transferred to the emergency room for a blood pressure spike. “The ER doctor said, ‘Somebody google Stiff Person Syndrome,’” he said. “They wouldn’t touch me until they got hold of my neurologist.”

Schartel said he sometimes feels like a “worm on hot cement,” adding that his wife “hates that analogy, but it’s perfect.” 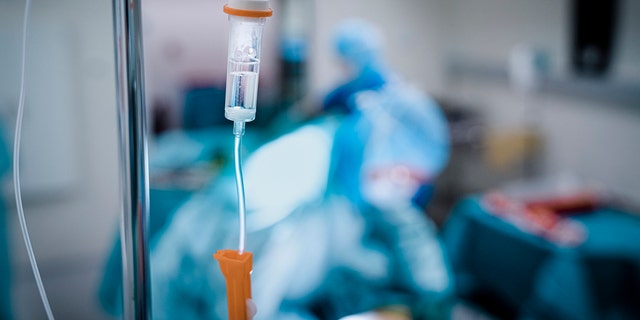 Schartel of Pennslvania receives IVIG treatments (intravenous immunoglobulin) once a month, he said. The treatments take about three or four hours per day for three days.
(iStock)

For him, the “number-one” symptom is “the anxiety of doing anything out of routine,” he said.

“That is all day, every day. Every muscle, every joint hurts. My spine, the cartilage in my spine —everything.”

“There’s no money from ‘Big Pharma’ to do anything for us.”

He also said, “My life revolves around my medication every six hours. These drugs mask the symptoms; I know that deep dark cloud of fatigue is a couple of days away if I stop the medicine.”

‘Always taken care of everything’

Sleep is elusive for him. “The best I get is three hours’ straight sleep at a time,” he said.

Noting that one of his sons who lives nearby watched his own mother “die of cancer,” Schartel said that “now he’s watching me do this — he’s here every day, very sympathetic and very supportive.”

The disease has been challenging for his current wife, Schartel said.

“I’ve always taken care of everything — I’ve made sure the household was run for 30 years, and now she’s watching the person who has done everything turn into somebody who can barely make it up the steps.” 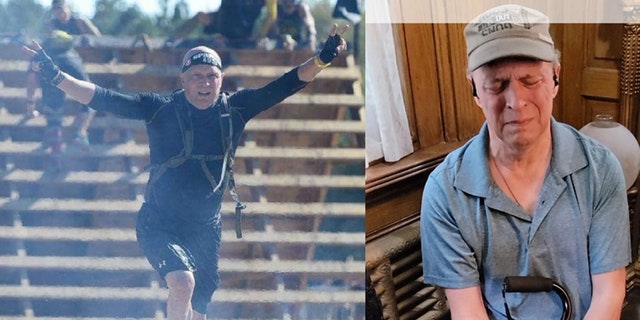 Above left, Schartel is shown during an extreme sporting event pre-diagnosis. On the right, Schartel suffering the spasms and pain of SPS.
(Steven Schartel)

Schartel is still working as a data analyst while he struggles with his round-the-clock SPS symptoms. When he is able to, he does crafting in his wood shop.

“There’s no money from ‘Big Pharma’ to do anything for us,” he said. “3,000 people in the U.S. have it. There are no FDA-approved drugs or treatment plans.”

He added, “We use drugs made for every other disease under the sun.”

KIRSTIE ALLEY’S ‘RECENTLY DISCOVERED’ COLON CANCER BATTLE: WHAT TO KNOW ABOUT THE DISEASE

The National Library of Medicine noted recently, in a paper published in Dec. 2020, “Stiff-person syndrome (SPS) is a rare and disabling central nervous system disorder with no satisfactory treatment.”

“If Celine can’t get back on tour, if she could be a spokesperson — it would be phenomenal.”

It adds, “Significant advances have been developed in diagnosing and understanding SPS. Nevertheless, the treatment of SPS has not been clearly established, and physicians struggle to treat this condition.”

In an effort to capture what it’s like living with SPS, Schartel said, “If you take MS [multiple sclerosis], Parkinson’s [disease], epilepsy, fibromyalgia, sensory overload and anxiety — roll that all into one and you have SPS.” 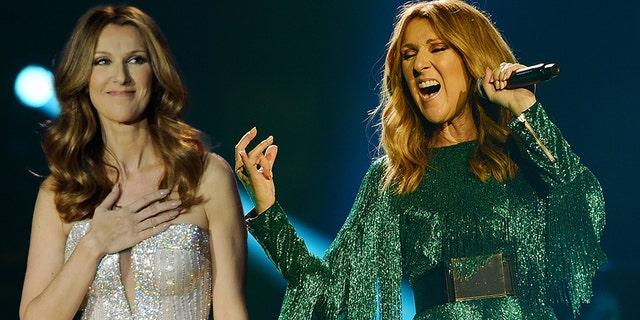 Singer Celine Dion announced on Instagram last week that she’s been diagnosed with SPS, a very rare neurological disorder. Steven Schartel is hoping that through her, others will learn more about the illness.
(Getty Images)

He also said, “Think of your day as a video game. You have so much stamina to get through your day. My stamina bar depletes at a much faster rate, so I must pick and choose the activities surrounding how well I feel.”

He is hopeful about a point related to superstar Celine Dion. Now that she’s shared her battle with the disease publicly, he said he hopes others will learn more about SPS.

“If Celine can’t get back on tour, if she could be a spokesperson — it would be phenomenal,” he said.

Schartel says he will “keep fighting with everything he has.”

Fox News Digital asked him, “What’s the one thing you’ve learned through your battle with SPS?”

His answer was quick and certain.

“Family, home and health — if you have those, you have everything,” he said.