‘Liz, you’re FIRED!’ Trump calls anti-MAGA Republican Cheney a ‘lapdog for Pelosi’ as he rallies for her primary rival Harriet Hageman – and flashes up photo of the Wyoming Rep. with George W. Bush’s face superimposed on hers

Donald Trump issued on Saturday his most staunch opposition of an incumbent Republican lawmaker yet as he rallied against ‘Pelosi’s lapdog’ Liz Cheney in Casper, Wyoming as he flashed an image of her face mashed up with George W. Bush.

‘Wyoming thought you were electing a conservative warrior, but instead you got a lapdog for Pelosi and a human sound bite machine for CNN and MSDNC,’ Trump said, using his mashup of the liberal network MSNBC and the DNC (Democratic National Committee).

‘Liz Cheney hates the voters of the Republican Party and she has for longer than you know. Wyoming deserves a congresswoman who stands up for you and your values not one who spends all of her time putting you down and going after you president in the most vicious way possible,’ the former president told thousands of supporters gathered in Casper on Saturday afternoon. ‘

He added that the three-term congresswoman is ‘the face of the Washington swamp and the same failed foreign policy of the Clintons, Bushs, the Obamas, the Bidens, and the entire sick political establishment.’

He then put up on the jumbotron at the front of the Ford Wyoming Center an image of Cheney’s hair and face mashed up with an image of former President George W. Bush.

‘I think she looks good, looks nice,’ Trump jested. ‘But Liz Cheney is about America last.’

Trump visited Casper, Wyoming nearly three months before the Wyoming GOP primary on August 16, 2022 where the candidate he endorsed – Harriet Hageman – is the favorite to win.

Hageman received several standing ovations in her remarks ahead of Trump taking stage.

Her simple message: Wyoming is ‘fed up’ with Cheney and other congressional RINOs, which Trump uses degradingly to refer to those he claims are Republicans In Name Only, but who do not represent real ideals of the Party.

Trump said toward the top of his nearly hour and a half remarks that RINOs are worse than Democrats. 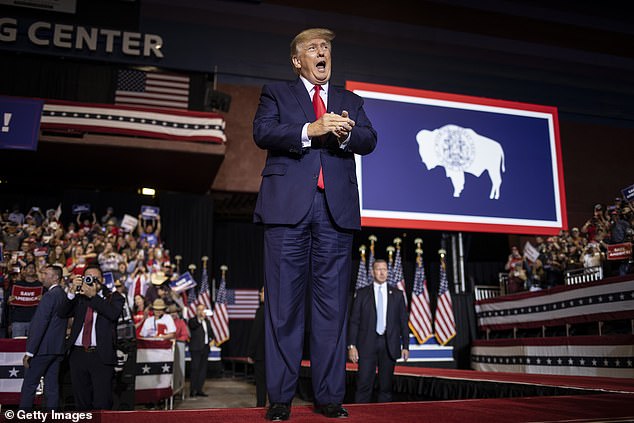 Donald Trump takes stage at the Ford Wyoming Center in Casper, Wyoming on Saturday to rally against Representative Liz Cheney and for her rival Harriet Hageman 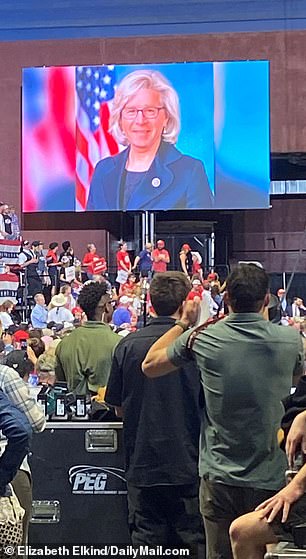 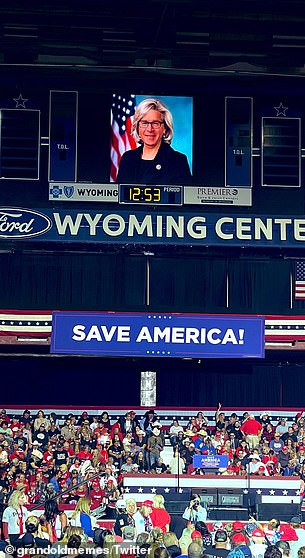 Trump said Cheney is as bad as the ‘the Clintons, Bushs, the Obamas, the Bidens, and the entire sick political establishment.’ He mocked her with an image displayed on several screens in the event center of her face mashed up with George W. Bush’s 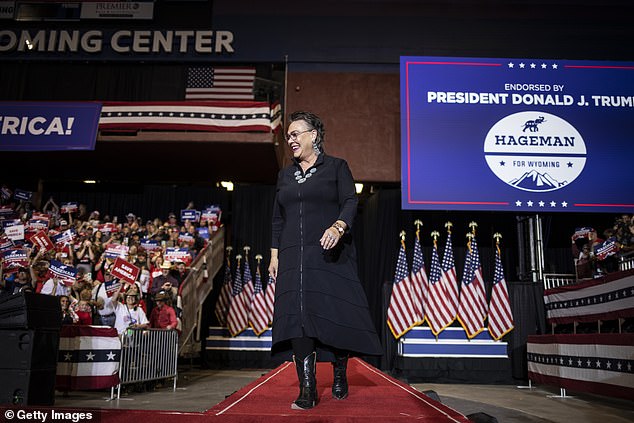 Hageman (pictured) received a standing ovation and wild applause as she walked out on stage Saturday and gave a message of Wyomingites being ‘fed up’ with Cheney, RINOs and Democrats. She is 30 points ahead of Cheney is recent polling 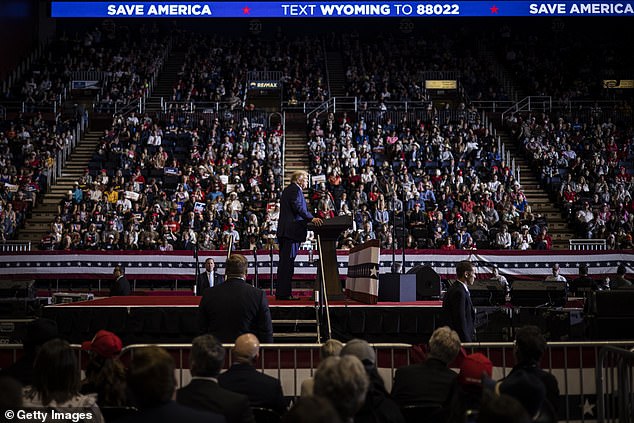 The former president told Wyoming voters to ‘fire Liz’ from Congress. ‘Wyoming thought you were electing a conservative warrior, but instead you got a lapdog for Pelosi and a human sound bite machine for CNN and MSDNC,’ Trump lamented

As a throwback to his famous line from his days as a judge on reality television show The Apprentice, Trump told Wyoming residents at the Saturday rally that they need ‘fire’ Cheney.

‘And that’s why in two months from now, the people of Wyoming are going to tell her Liz you’re fired get out.’

This comment sparked potentially the loudest applause of the night.

After voting for Trump’s impeachment, joining the January 6 select committee probing the Capitol attack and speaking out repeatedly against the former president, Cheney faced swift fallout from the GOP.

Trump lamented that he has been investigated more than notorious mobsters and criminals.

‘Now you look at the so-called word ‘insurrection.’ January 6, what a lot of crap. And most of this country knows it, and you know who else knows it, the Democrats. It’s another con job just like Russia, Russia, Russia. This was made up by Hillary Clinton and the Democrats. A total fake story. And they have another fake story coming, the insur-and many others,’ Trump said.

‘Don’t forget,’ he cautioned, ‘I’ve been investigated more than Billy the Kid, Jesse James, and the great legendary mobster Alphonse Capone- did anyone ever hear of him? Al Capone.’

‘If you add them all up and double ’em and triple ’em I’ve taken the cake for investigations,’ Trump claimed. ‘Friend of mine said you know this has been going on for years – you must be the most honest man in the history of our country.’

Firebrand Colorado Republican Representative Lauren Boebert received a warm welcome from the crowed in Wyoming as she took stage to help tee up Trump.

The congresswoman bragged about being a ‘RINO hunter’ when talking about Cheney., but left her name out when telling the crowd that the establishment conservative need to be ‘taken out.’

‘I am a professional RINO hunter. It has been brought to my attention that your RINO-In-Chief needs to be taken out of Wyoming,’ she said to heavy applause.

Boebert is one of several high profile GOP cast who Trump invited to the rally for Hageman, his first event in Wyoming for the candidate.

Trump recruited Hageman to challenge Cheney for Wyoming’s lone House seat after the incumbent angered him by working with Democrats on the house select committee investigating the US Capitol attack.

Boebert also touted her restaurant, Shooter’s Grill in Rifle, Colorado, as the ‘safest’ in the United States because she allows waitresses to open-carry their firearms.

‘I own a restaurant in Rifle, Colorado where my waitresses open carry,’ Boebert boasted at the top of her speech after an enthusiastic welcome. ‘We are the safest restaurant in America.’ 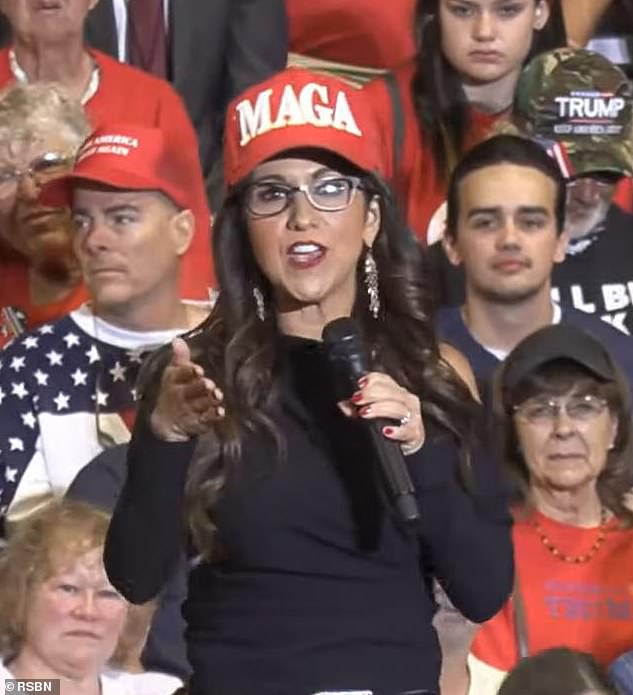 Lauren Bobert of Colorado bragged about being a ‘RINO hunter’ when talking about Cheney at Trump’s Wyoming rally. ‘I am a professional RINO hunter. It has been brought to my attention that your RINO-In-Chief needs to be taken out of Wyoming,’ she said to heavy applause 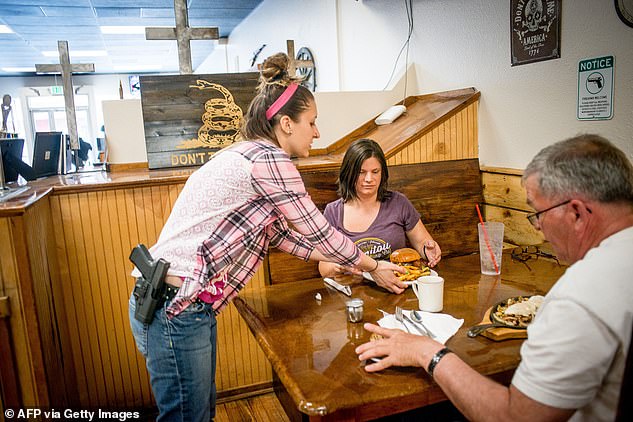 She claimed her Rifle, Colorado restaurant was the safest because her waitresses can open-carry (pictured)

She also took aim at Texas Democratic gubernatorial candidate Beto O’Rourke for demanding more gun control in the wake of the horrific massacre in Uvalde, Texas, last week that took the lives of 19 children and their two teachers.

Responding to O’Rourke’s stance on guns without mentioning the shooting in Texas last week, she added: ‘Hell no, you are not taking our guns – and he’s back at it again.’

‘But I don’t mind wiping the floor with him again.’

She also slammed President Joe Biden, 79, as the ‘pathetic commander in chief who is command of nothing.’

Earlier on Saturday, Republican Representative Andy Biggs of Arizona accused Cheney of trying to ‘destroy’ the GOP and Congress itself in a conversation with DailyMail.com ahead of his speech at Trump’s rally Casper, Wyoming.

Biggs also accused his fellow GOP lawmaker Cheney of trying to ‘destroy’ the GOP and Congress itself ahead of his speech at Donald Trump‘s rally in Casper, Wyoming.

The former House Freedom Caucus chair tore into the Wyoming conservative, claiming that her Trump-backed rival Hageman is an ‘America first-er’ who better understands the Republican base.

‘Liz Cheney is the worst candidate for Wyoming,’ Biggs said. 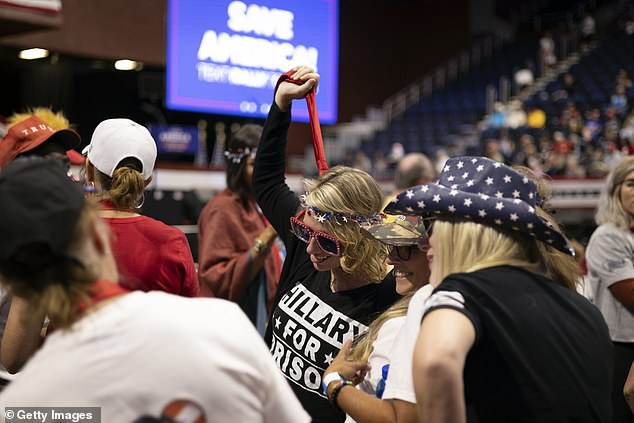 Trump’s appearance there Saturday was his first in Wyoming on Hageman’s behalf as she seeks to unseat Rep. Liz Cheney in the state’s upcoming August 16 primary 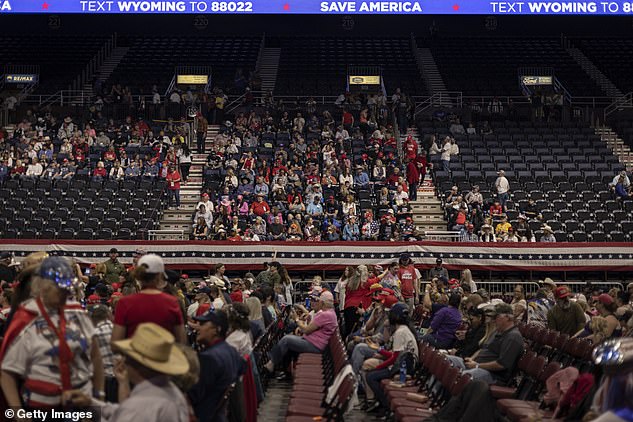 His supporters filed into the Ford Wyoming Center on Saturday afternoon, where a high-profile list of speakers are expected to address the crowd 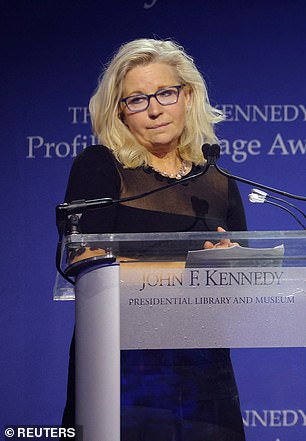 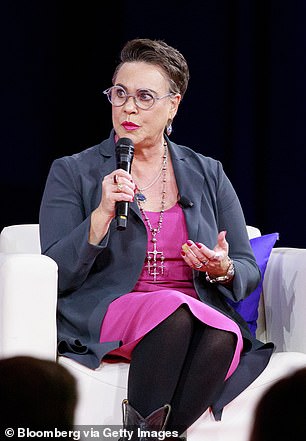 ‘Harriet is going to be an America first-er. I mean, she gets the policies that I think the conservative populist movement is taking hold of. I really, really think she gets it, and she’s going to carry it forward and advocate for it in Congress.’

He added, ‘And Liz Cheney, instead of trying to work with the Republican Party and build it up in Congress, is now trying to actively destroy – not just the party, but the institution itself.’

Biggs is among several high-profile speakers the former president invited to Saturday’s rally, Trump’s first appearance in Wyoming for Hageman since recruiting her to run against Cheney in the August 16 Republican primary.

House Republican Leader Kevin McCarthy, who also turned against Cheney to endorse Hageman, made a video address – but was booed by the audience.

Pro-Trump Reps. Matt Gaetz and Kate Cammack of Florida made appearances as well. 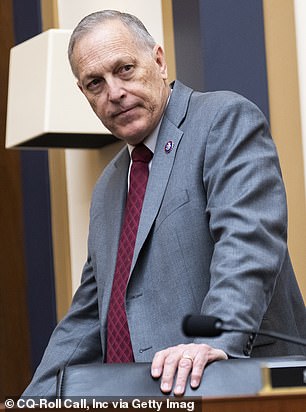 Rep. Andy Biggs, one of the speakers, told DailyMail.com that Rep. Cheney ‘left’ the Republican Party behind

Cheney, the state’s lone House representative, is facing an uphill battle ahead of the race. She was removed from her leadership role heading the House GOP Conference last year over her criticism of Trump and cooperation with Democrats’ January 6 investigation.

But Biggs told DailyMail.com on Saturday that he believes it was Cheney who abandoned Republicans rather than the party casting her out.

Biggs is among the five sitting lawmakers who has been subpoenaed by the House Capitol riot committee. The panel has accused him of being involved in ‘plans to bring protestors to Washington for the counting of Electoral College votes’ and said he ‘was involved in efforts to persuade state officials that the 2020 was stolen.’

Rep. Elise Stefanik of New York, who replaced Cheney in the No. 3 House leadership role, made a video address at the rally.

‘I know what it takes firsthand to beat Liz Cheney, and I’m telling you, Harriet has what it takes,’ Stefanik said.

The Cheney name has been a fixture in US politics since her father, former Vice President Dick Cheney, held his daughter’s seat for a decade throughout the 1980s. During that time he, like Rep. Liz Cheney, held the House GOP Conference Chair position.

But a new poll released on Friday shows Cheney trailing Hageman by a whopping 30 points with less than three months until the race.

The WPAi/Club for Growth PAC survey shows that 56 percent of Republican Wyoming primary voters would support Hageman if the election were held today.

Cheney officially filed for the 2022 primary on Thursday, but only 26 percent said they would vote for her reelection of the 400 likely Republican primary voters polled in the deep red state on May 24 and 25.

Wyoming State Senator Anthony Bouchard – who has been accused of ‘a continued pattern of intimidating and disorderly conduct’ – is in third place with 12 percent, while another 6 percent are undecided on who they will vote for.

Voters on the ground appear split on whether they want to keep Cheney in office.

But Ed’s wife Liz, 63, said her ballot for Hageman has nothing to do with Trump’s endorsement of the trial lawyer. 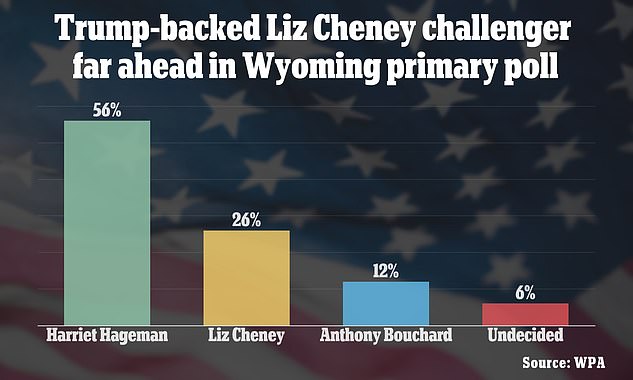 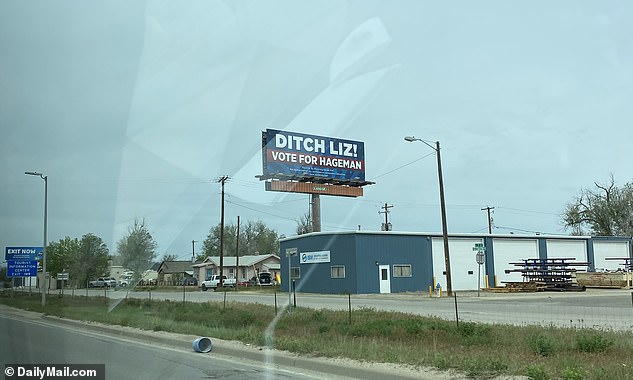 Several Wyoming residents at Johnny J’s Diner on Saturday told DailyMail.com that they will vote for Hageman – but not because of Trump’s endorsement. Billboards around Casper urged voters to ‘Ditch Liz!’

‘I’m voting for Hageman, not because of Trump though,’ she said. ‘I’m voting because I don’t believe in Liz Cheney. ‘So it’s different, for me it isn’t about coattails or anything like that.’

The couple, who were dining with a third woman who is attending the rally Saturday, said that they voted for Cheney in all of her previous elections, but will not be recasting a ballot for her in the primaries.

Meanwhile Robert Morris, 73, a local of Casper, told DailyMail.com on Saturday that ‘Liz is a real Republican’ and said he would be voting for her in the August primary elections in Wyoming.

The former engineer said he is a ‘registered Republican’, but voted for Hillary Clinton in the 2016 presidential election.

‘Just everything he [Donald Trump] did turned me off. I mean, I didn’t think much of Hillary Clinton either, but I voted for her rather than him,’ Morris said while dining with a friend at the diner’s bar.