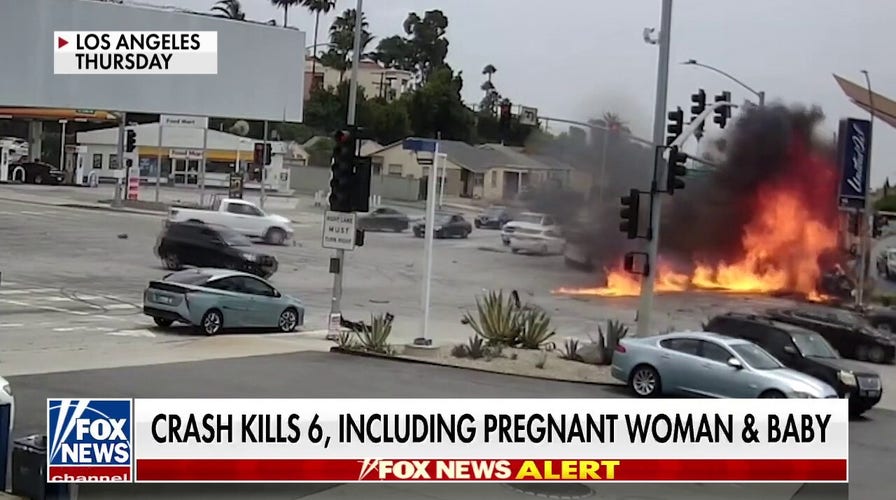 Fox News’ Matt Finn reports from Los Angeles after a car ran a red light, causing a fatal accident. (WARNING: This video could be disturbing to some viewers.)

Five people have reportedly been killed and eight have been hospitalized as a result of a fiery car crash in Los Angeles, California, on Thursday afternoon.

The crash involved six to seven vehicles, three of which caught on fire, and took place at the busy intersection of South La Brea Avenue and Slauson Avenue in the Windsor Hills area of West Los Angeles at 1:30 p.m., KTTV-TV reported.

A pregnant woman and her unborn fetus, an infant child, and two other adults were killed in the crash and the fire that ensued.

Officials believe that a Mercedes-Benz traveling at a high rate of speed ran a red light and started the crash. 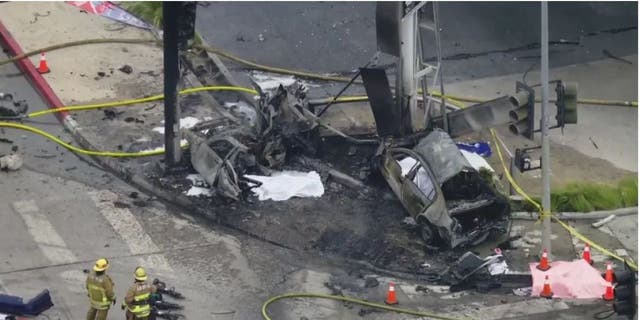 Five people are dead after a car crash in West Los Angeles on Thursday. (KTTV-TV)

Images from the scene show two burned vehicles, one of which was split in half and appears to have crashed into a pole.

Eight people were reportedly sent to the hospital and their injuries are unknown.

“It almost looks like a war zone,” a California Highway Patrol (CHP) officer told reporters at the crash scene. 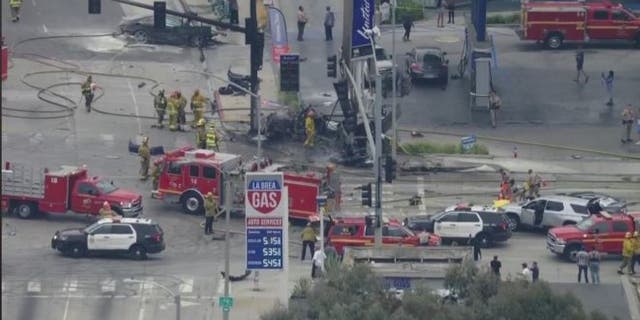 Five people are dead after a car crash in West Los Angeles on Thursday. (KTTV-TV)

The CHP told KTTV-TV that the driver of the Mercedes was critically injured in the crash.

Charges are likely to be presented to the Los Angeles District Attorney’s Office to be filed.

KABC-TV helicopter reporter Chris Cristi posted video of the incident, showing the Mercedes bursting into flames as it plowed through the intersection.

The Los Angeles Police Department did not immediately respond to a request for comment from Fox News Digital.