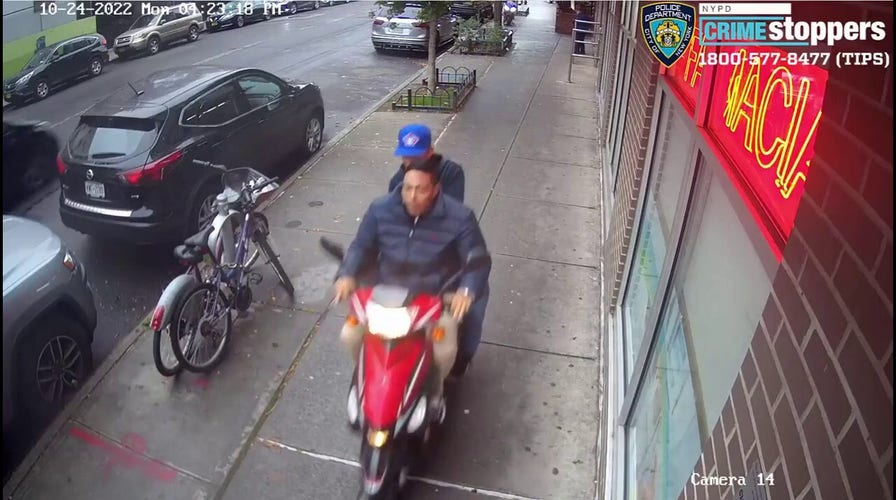 Footage shows two men NYPD is currently on the look for who have approached 7 different victims in Queens and snatched their necklaces from their necks before fleeing. (Credit: @NYPDnews / Twitter)

Two men on a scooter were caught on video violently snatching a necklace from a 12-year-old girl on a New York City sidewalk in broad daylight as she walked home from school – and police say the duo are suspects in six similar robberies.

The surveillance footage released by the New York City Police Department shows the men riding up alongside the teen on Oct. 24, at about 4:30 p.m., in Elmhurst, Queens.

The man on the back of the scooter tries to rip the necklace from her neck – but the bauble does not break, and the young girl is dragged at least 10 feet during the brazen robbery.

CRIME, EMPLOYEE SHORTAGES FORCE NYC TO RAMP UP SURVEILLANCE, SOME BUSINESSES TO CLOSE THEIR DOORS 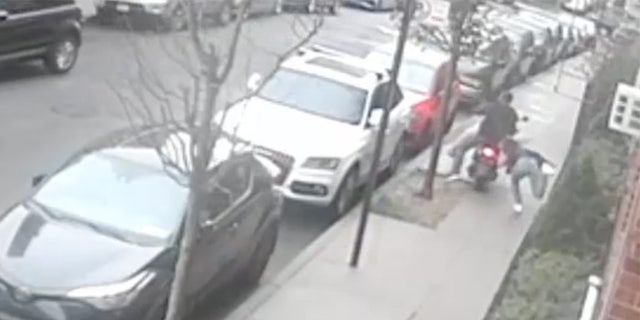 A pair of alleged New York City robbers tried to snatch a 12-year-old girls necklace and ended up dragging her 10 feet, police said. The men are suspected in six similar thefts.
(NYPD)

The scooter is seen coming to a stop as the assailant climbs off and tears the necklace from the girl’s neck as she cowers on the ground; the men then flee the scene.

Two days later, also in Queens, a 37-year-old woman was approached by the same men on a scooter and was hit in the face at about 2:30 p.m. as she crossed an intersection at 34th Avenue and 103rd Street, according to the NYPD. 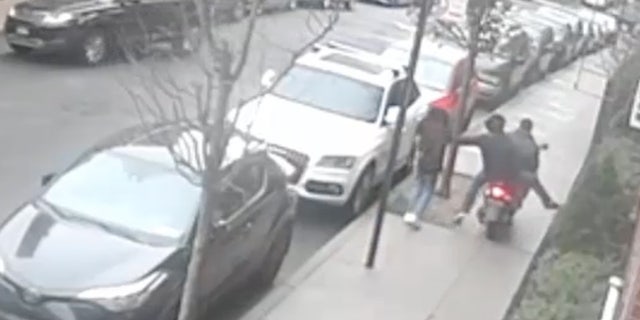 They took off after unsuccessfully trying to snatch her necklace. The bike bandits struck three more times that same day, stealing necklaces from a 53-year-old woman, a 52-year-old man and 35-year-old woman at separate locations in Queens, authorities said.

The crime spree continued the next day with the men allegedly ripping a necklace off a 70-year-old woman.

On Nov. 7, a woman, 48, had her necklace forcibly removed at the intersection of Penrod Street and Otis Avenue, according to officials. 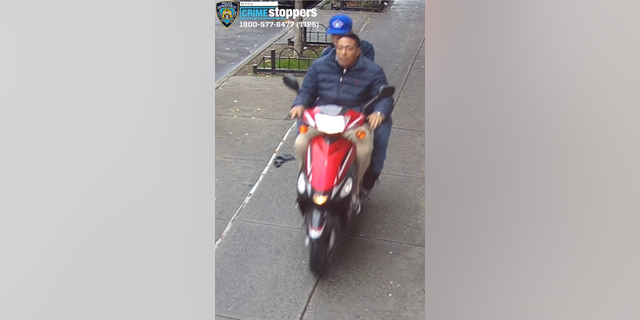 These two men are wanted in connection to seven New York City robberies, according to police.
(NYPD)

Police are asking members of the public to come forward with any information about the assailants or these crimes.

The public can also submit tips by logging onto the CrimeStoppers website at https://crimestoppers.nypdonline.org/ or on Twitter @NYPDTips.