Mandy Moore and Sydney Sweeney were just one of the many who walked the glamorous red carpet at the 2nd Annual HCA TV Awards at the Beverly Hilton earlier Saturday evening.

The This Is Us actress, 38, who is currently eight months pregnant with baby number two, donned a black, floral patterned dress with cape sleeves.

The Euphoria star, 24, also turned heads as she arrived at the star-studded award show in Beverly Hills, wearing a green velvet mini dress. A number of other celebrities soon joined the actresses on the red carpet.

The talented actress donned a black silk dress with a caped sleeves which contained floral patterns that added a touch of elegance to the gown.

She slipped into a pair of strappy, open-toed heels to coincide with the color scheme of her outfit.

Mandy parted her hair in the middle and pulled her long locks into a sleek up do to finish off her overall look for the glamorous ceremony.

The Princess Diaries actress recently finished the last season of This Is Us, which she worked on for a total of six years. 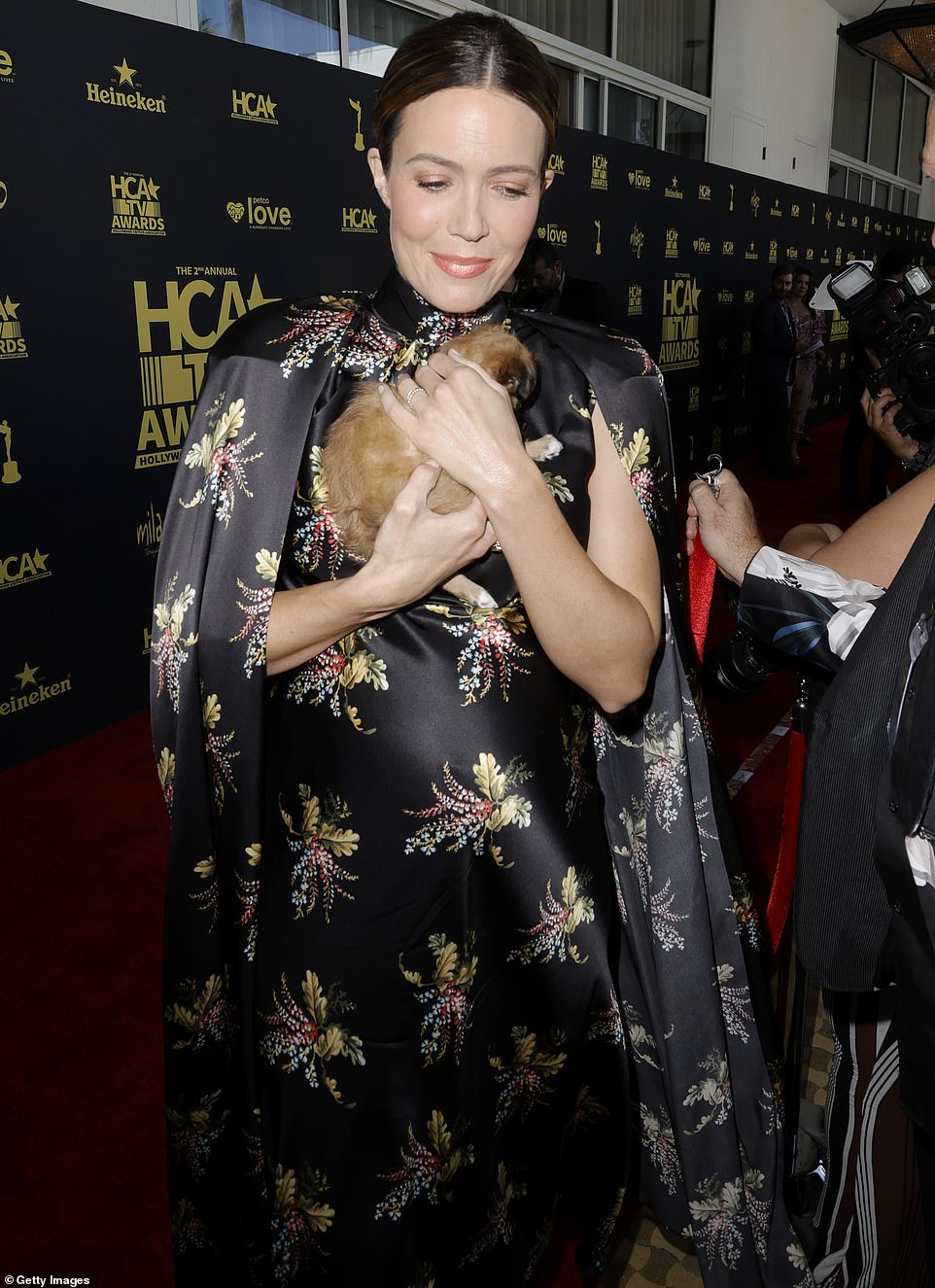 Cute! At one point as the mom of one, soon to be two, walked the red carpet, she was seen holding a tiny puppy in her arms 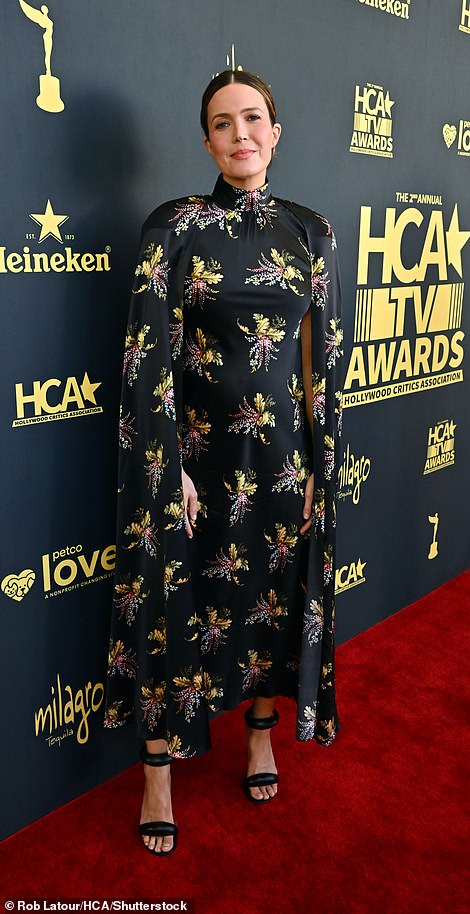 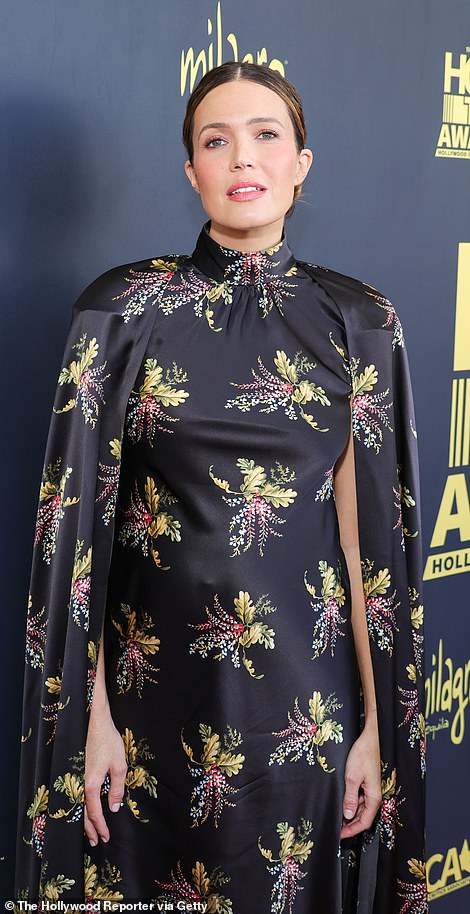 Baby bump! Mandy showcased her growing baby bump as she walked the red carpet, and is expecting baby number two this fall

According to Deadline, Mandy was honored with the Virtuoso Award, which is given to an, ‘individual who has cultivated the industry with their talent that expands well beyond a singular role.’

Scott Menzel, the HCA Founder, gushed about the actress’s talent and stated that, ‘Over the past two decades, Mandy Moore has transformed from a pop superstar to an actress to a director,’ reported the publication.

Sydney looked stylishly chic when she arrived at the award ceremony, donning a dark green velvet mini dress with a low, V-cut. The off-the-shoulder ensemble had a belt secured at the waist to show off her fit physique. 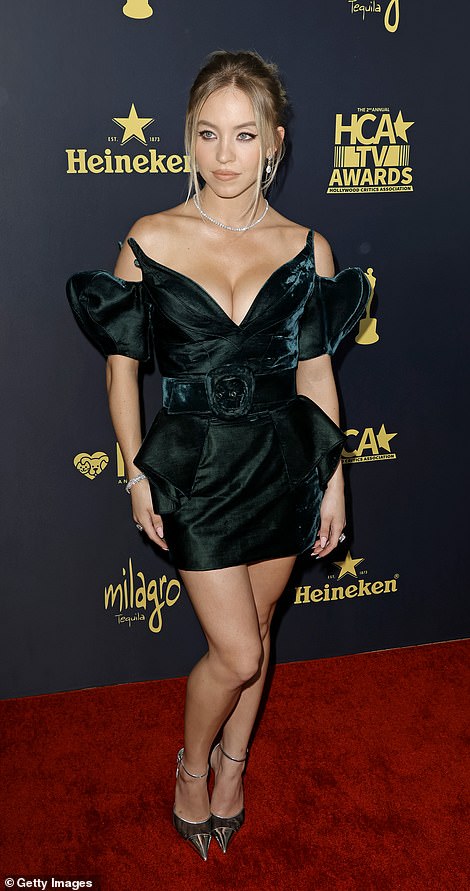 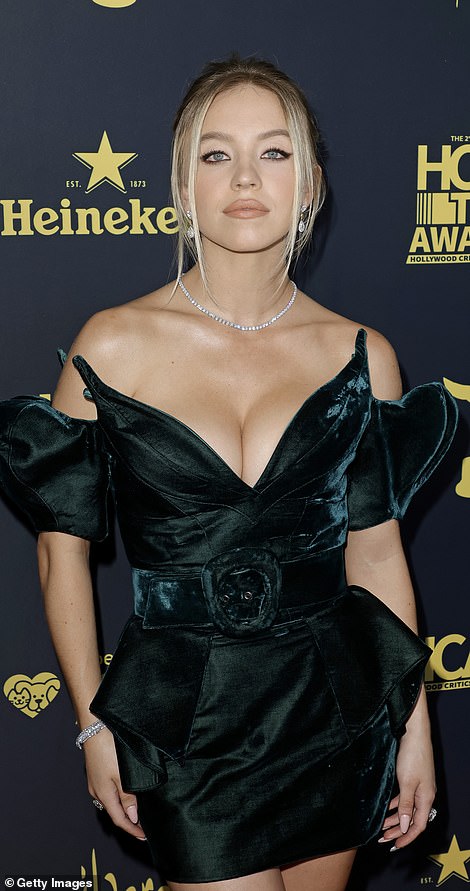 Glammed up: The talented actress was all smiles as she stepped onto the red carpet to celebrate the HCA TV Awards

The Euphoria actress added a pair of see-through black heels with a silver tip and straps.

Her blonde hair was styled into an up do with long locks falling onto the sides of her face.

To accessorize her red carpet look, she donned a dainty, diamond necklace with a matching bracelet and glistening earrings.

Her blue eyes popped with a layer of dark eyeliner and opted for a nude color for her lips to let the dress be the main focal point.

Other A-list stars had their chance to pose on the red carpet before attending the HCA Awards. HCA is known as the Hollywood Critics Association, which was founded in 2016.

Stylish: Connie Britton stunned in an off-the-shoulder blue gown with an embroidered pattern on front of the fitted gown

Connie Britton, known for her roles on The White Lotus and American Horror Story, stunned in a long, dark navy gown with glittery embroidery on the top portion of the dress.

Other This Is Us alum that attended the award ceremony included Justin Hartley, who donned dark pink dress pants and a light pink blazer.

The actor was pictured with his wife, Sofia Pernas, who he tied the knot with last year in 2021. The actress wore a strapless white dress with a high slit and added white strappy heels to complete her look.

Another This Is Us alum, Milo Ventimiglia, donned an all black ensemble for his evening look. 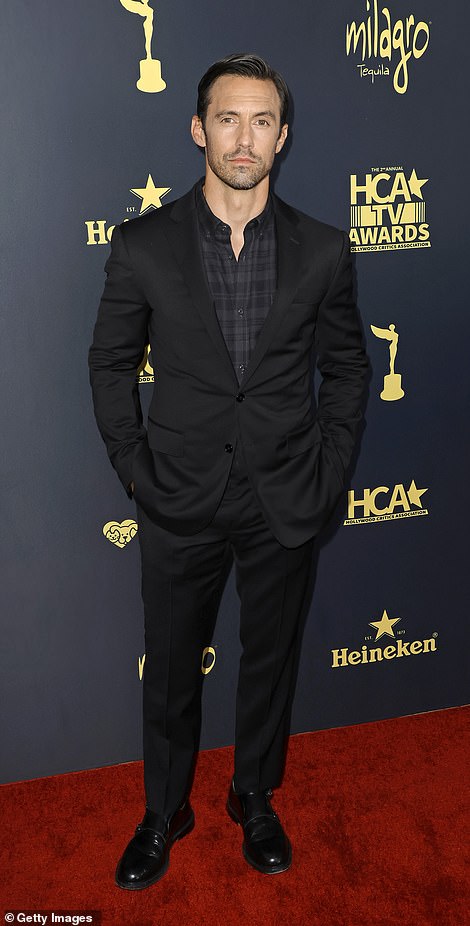 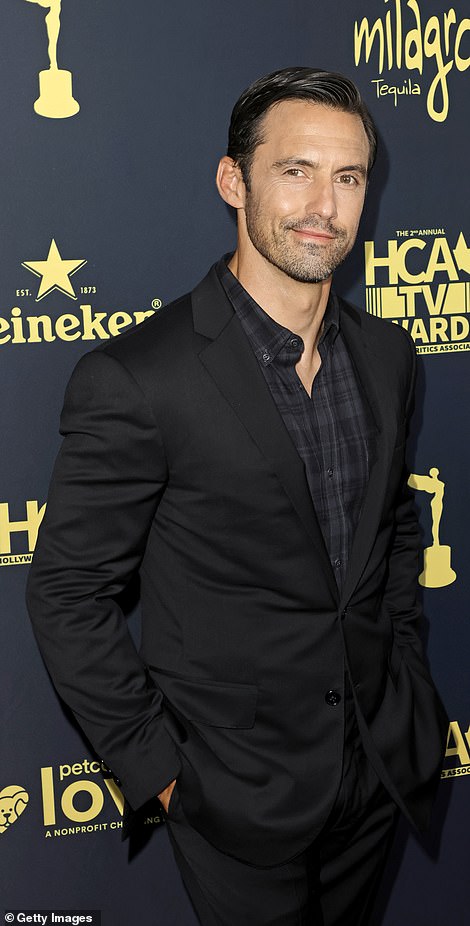 Stylish: Milo Ventimiglia wore a black suit and dark dress shirt underneath as he attended the HCA TV Awards

She wore a vibrant orange and pink patterned gown while her husband wore a classic black tuxedo with a black tie.

Other actors who were at the ceremony included Breaking Bad and Better Call Saul actors, Bob Odenkirk, Rhea Seehorn, and Giancarlo Esposito.

Vibrant: Melanie Lynskey donned a bright colored gown with her husband and actor, Jason Ritter, by her side 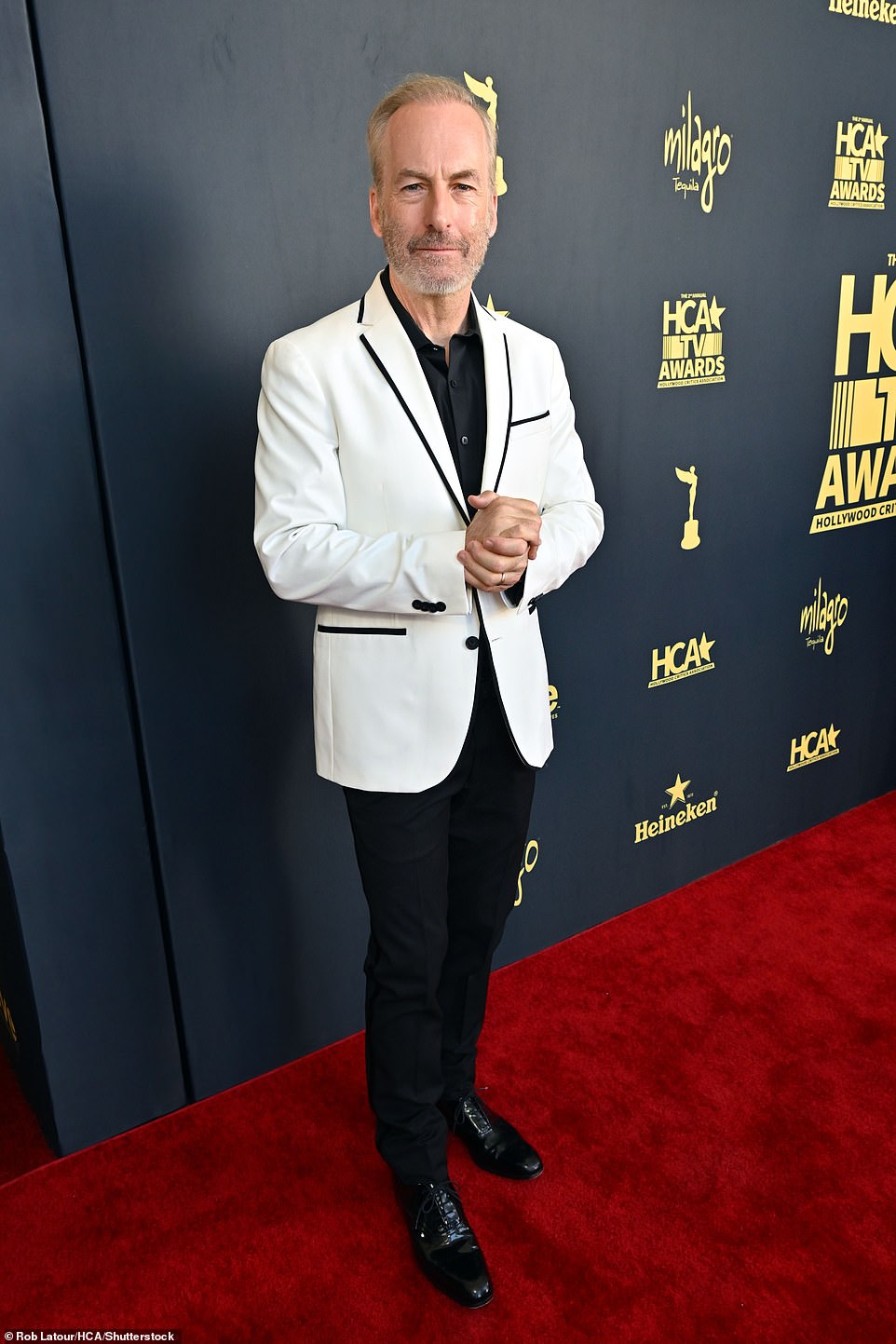 Talented: Bob Odenkirk, who has starred in Breaking Bad and Better Call Saul, wore a black and white tuxedo 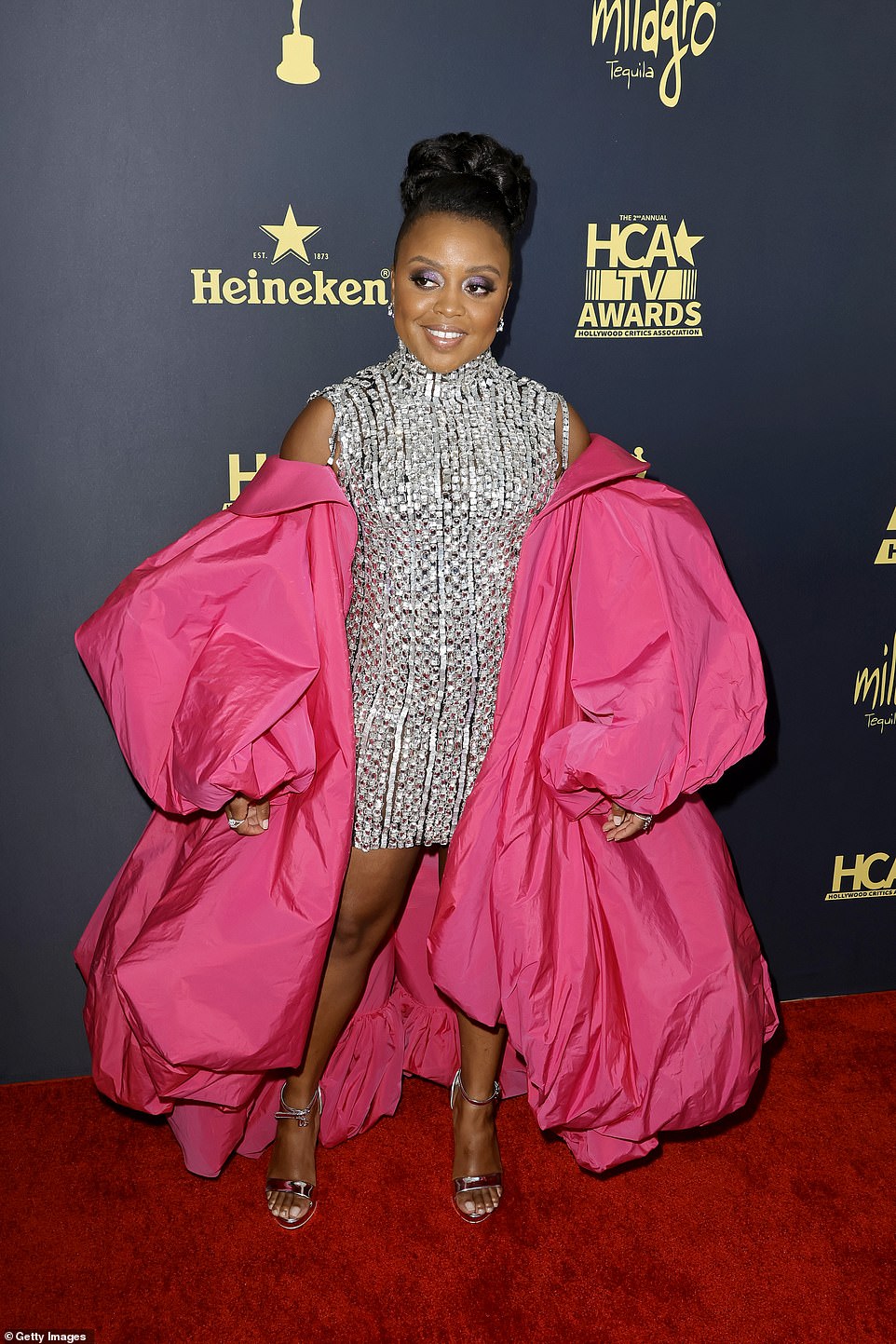 Eye-catching gown: Quinta Brunson donned a silver mini dress with a puffy pink sleeves that became a cape in the back

Glamorous: Sheryl Lee from Abbott Elementary donned a long black gown with a pop of teal on the sides and neckline and Juliette Lewis wore a strapless black gown made of sequin material 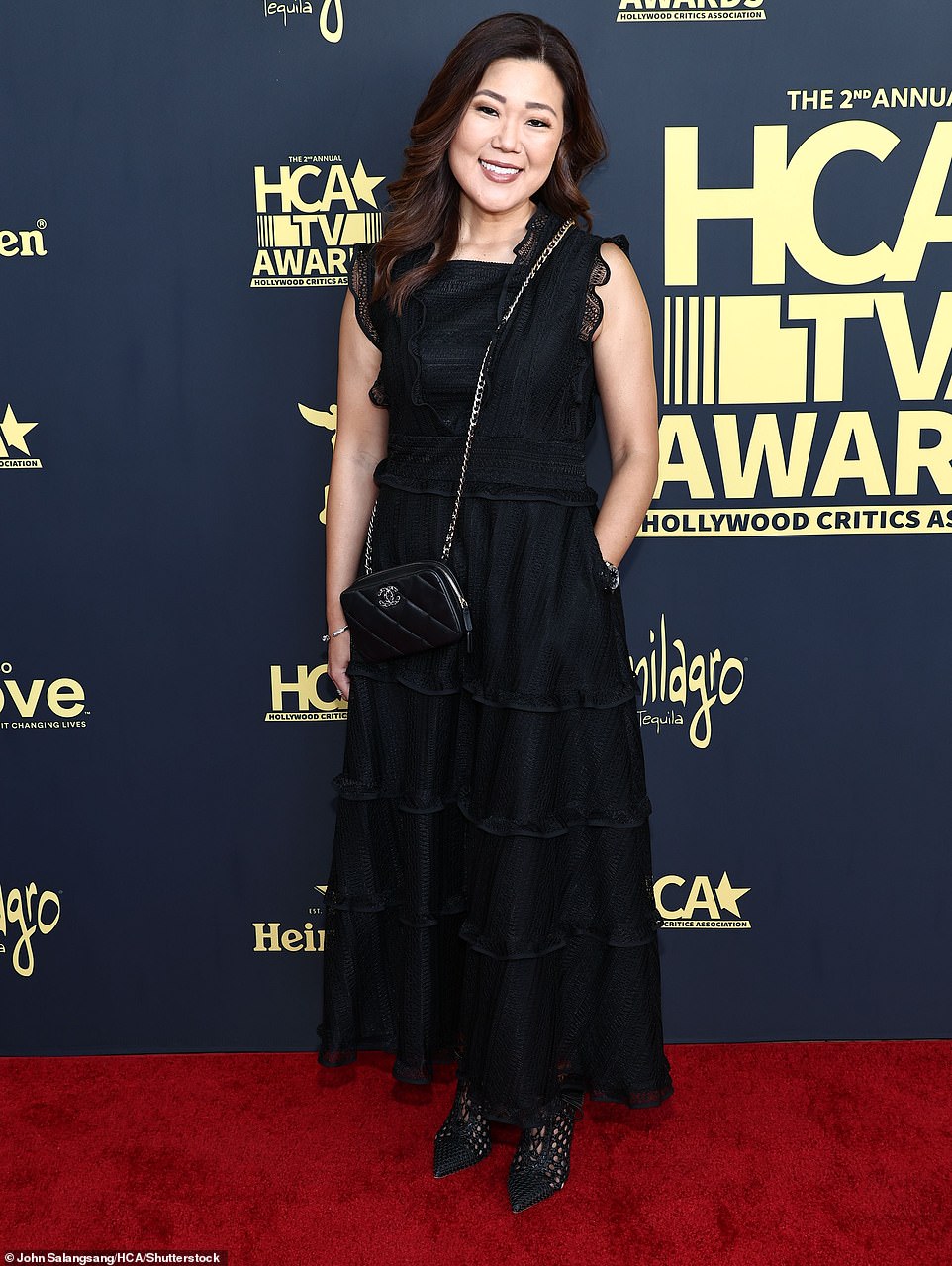 Chic: Christina M. Kim from, a talented TV writer, wore a long, layered black dress with a Chanel purse draped around her shoulder 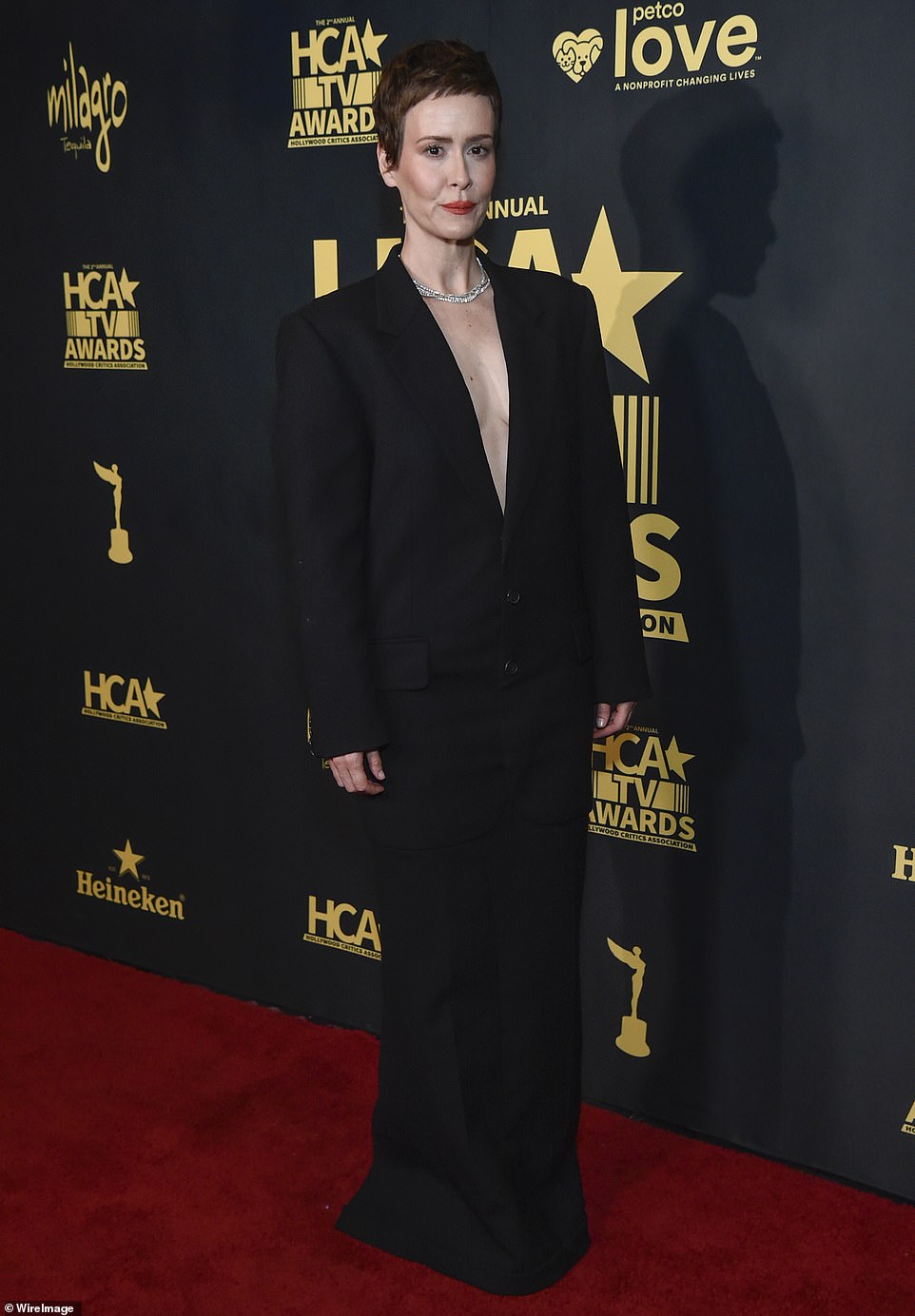 Sophisticated: Actress Sarah Paulson donned a unique gown made of a long blazer attached to a floor-length skirt 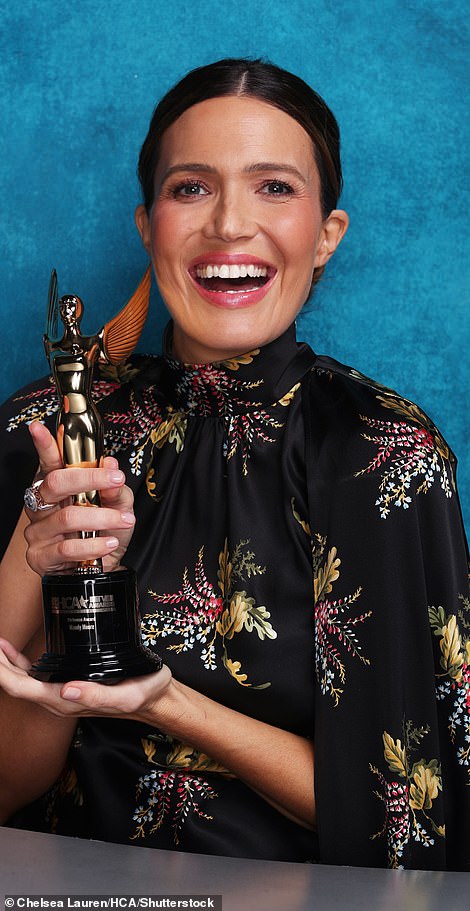 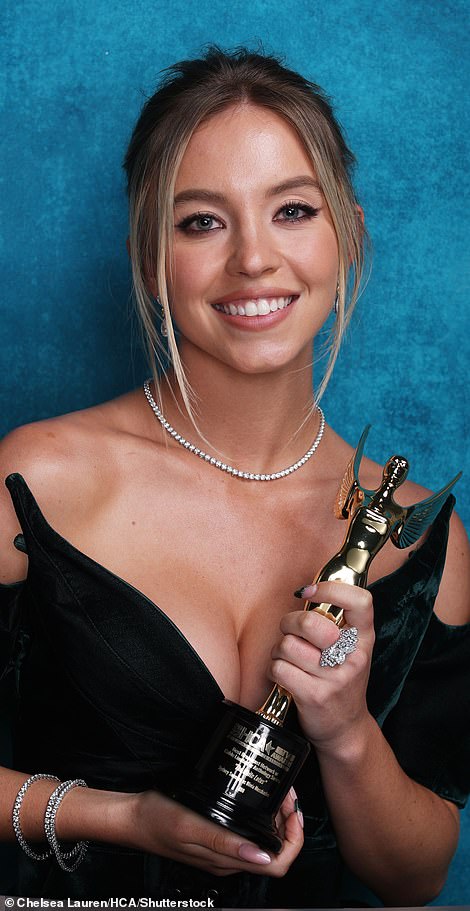 Award winners: Mandy and Sydney were all smiles and pictured professionally after they each received an HCA TV Award 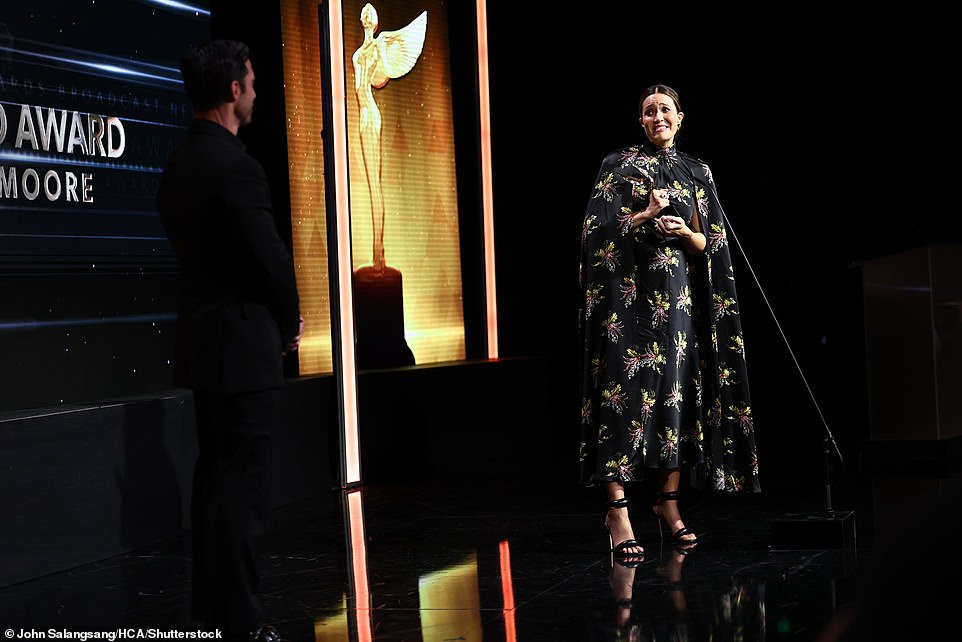 Happy moment: Mandy was seen on stage looking over at her This Is Us co-star, Milo Ventimiglia 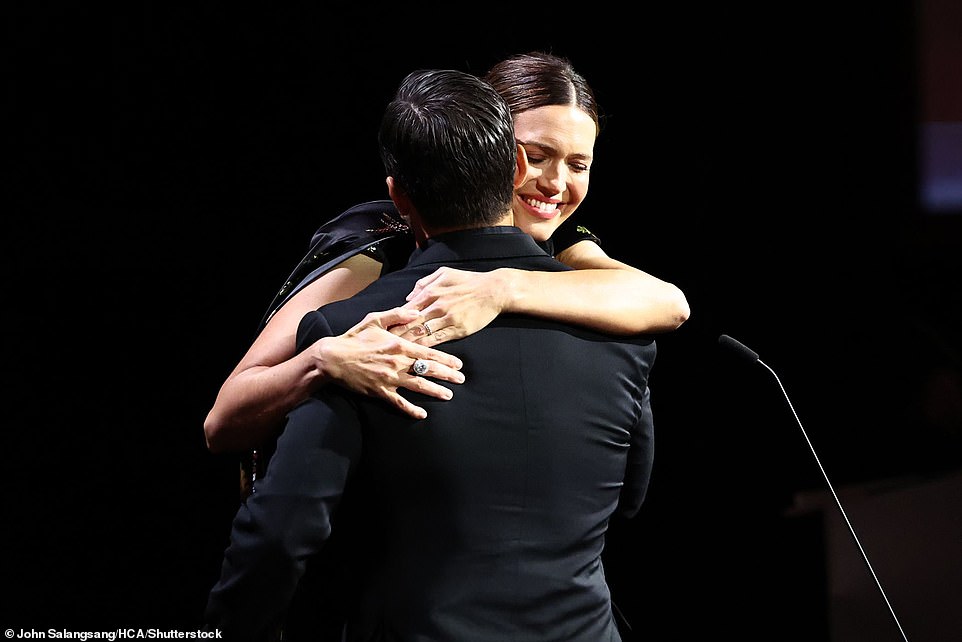 Honored: The television and movie actress was honored with the Virtuoso Award, which is given to an, ‘individual who has cultivated the industry with their talent that expands well beyond a singular role.’