Mark Zuckerberg has dismissed calls for him to resign from Facebook as ‘ridiculous’ after facing backlash from employees at the charity he and his wife run over his refusal to crack down on President Donald Trump‘s posts and hate speech.

The billionaire faced calls to resign from either Facebook or the Chan Zuckerberg Initiative, which he started with his wife Priscilla Chan, during a town hall meeting last week with the charity’s employees.

An engineer confronted the Facebook founder over his refusal to moderate President Donald Trump’s posts and said that his decisions at the social media giant reflected on him as a leader.

According to a video of the remarks, which was obtained by Recode, Zuckerberg said that employees needed to decide for themselves if they wanted to work for the charity if they disagreed with the decisions he made at Facebook.

The unidentified employee had said: ‘You and Priscilla have emphasized that Facebook and CZI are two separate organizations. This is true, but we have the same leader – you.

‘The actions you take at Facebook reflect on you as a leader and your leadership skills and values. It only reflects reality to say that our leader’s idea of free speech values calls to murder people for demonstrating over the political speech of the demonstrators themselves.’ 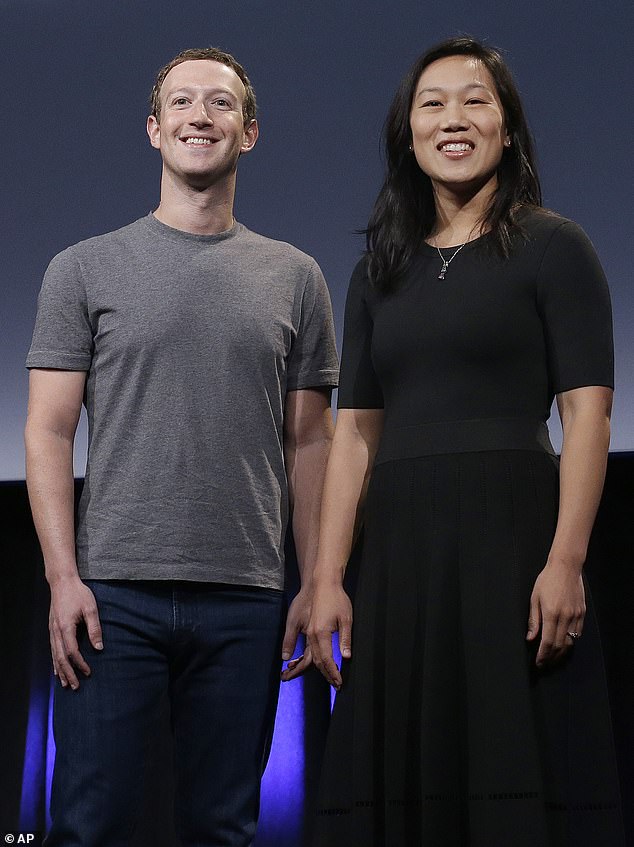 The billionaire faced calls to resign from either Facebook or the Chan Zuckerberg Initiative, which he started with his wife Priscilla Chan, during a town hall meeting last week with the charity’s employees

The employee went on to ask Zuckerberg if he would resign from either Facebook or the charity or moderate Trump’s posts.

Zuckerberg refused and said ‘none of those things would make sense’.

‘These organizations are different but I do think that they come from some common sets of values,’ he said.

‘I think at the end of the day, you all need to make whatever decisions you think are right in terms of wanting to work in an organization that is associated with a leader who is making other decisions that you may disagree with.

‘Quite frankly, the idea that we would resign from CZI is ridiculous.’

While the charity and Facebook are separate entities, employees told Recode that what happens at one often filters through to effect the other.

‘The word they use between the two companies is that there’s a firewall – so they’re all very distinct and separate – which, in practice, doesn’t hold up,’ a CZI employee said.

‘They can say whatever they want, but there’s a huge area of overlap there. I think if they were just more honest about it, it would be good for everyone.’

It comes after Zuckerberg and his wife responded to criticism earlier this month after dozens of scientists slammed Facebook for not censoring Trump’s comments.

More than 160 researchers, who receive funding through their charity, sent a letter to the couple asking them to reconsider policies regarding people who post misinformation and ‘incendiary language’. 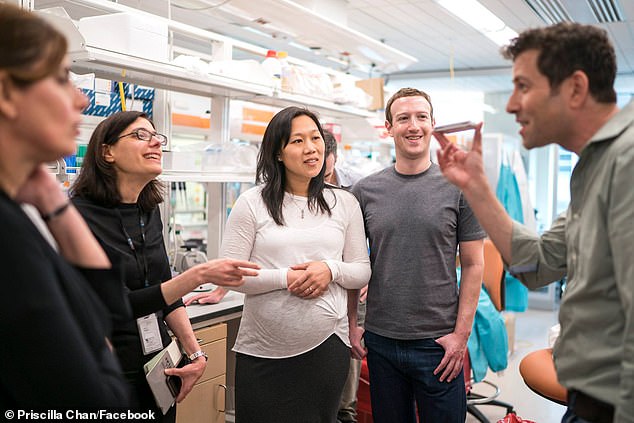 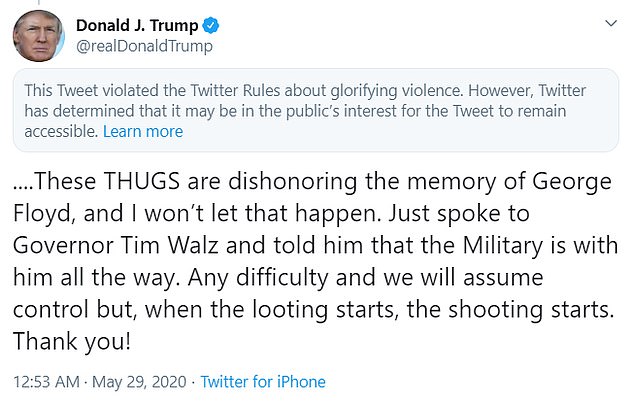 Some Facebook employees have publicly objected to Zuckerberg’s refusal to take down or label misleading or incendiary posts by Trump and other politicians. Zuckerberg did not flag Trump’s post that stated ‘when the looting starts, the shooting starts’ in response to unrest in Minneapolis over the videotaped killing of George Floyd. Twitter had both flagged and demoted a Trump tweet using the same language

In a reply, Zuckerberg and Chan said they were ‘deeply shaken and disgusted by President Trump’s divisive and incendiary rhetoric’ on Facebook.

They added, however, that the social media platform operated independently from their organization and had its own moderation policies.

‘Although CZI and Facebook are entirely separate and independent organizations with different missions and teams, we do share the same co-leader. And in this moment, we understand that CZI’s relationship with Facebook is not an easy tension to bridge,’ they said.

Some Facebook employees have publicly objected to Zuckerberg’s refusal to take down or label misleading or incendiary posts by Trump and other politicians.

But Zuckerberg — who controls a majority of voting shares in the company — has so far refused.

He said in a post that he would review ‘potential options for handling violating or partially-violating content aside from the binary leave-it-up or take-it-down decisions’.

‘I know many of you think we should have labelled the President’s posts in some way last week,’ he wrote.

‘Our current policy is that if content is actually inciting violence, then the right mitigation is to take that content down — not let people continue seeing it behind a flag. There is no exception to this policy for politicians or newsworthiness.’

A growing list of companies have started boycotting Facebook over its perceived failure to crack down on hate speech and incitements to violence.

Ben and Jerry’s, Patagonia and REI have stopped advertising on the site after the NAACP called for a boycott and accused Facebook of promoting ‘bigotry and violence’.